Wednesday April 8, 2020: On Days of our Lives today, Ben gets closure from Evan, Nicole tries to get Eric not to tell his brother about Mickey, and there's a glitch in Steve's surgery. 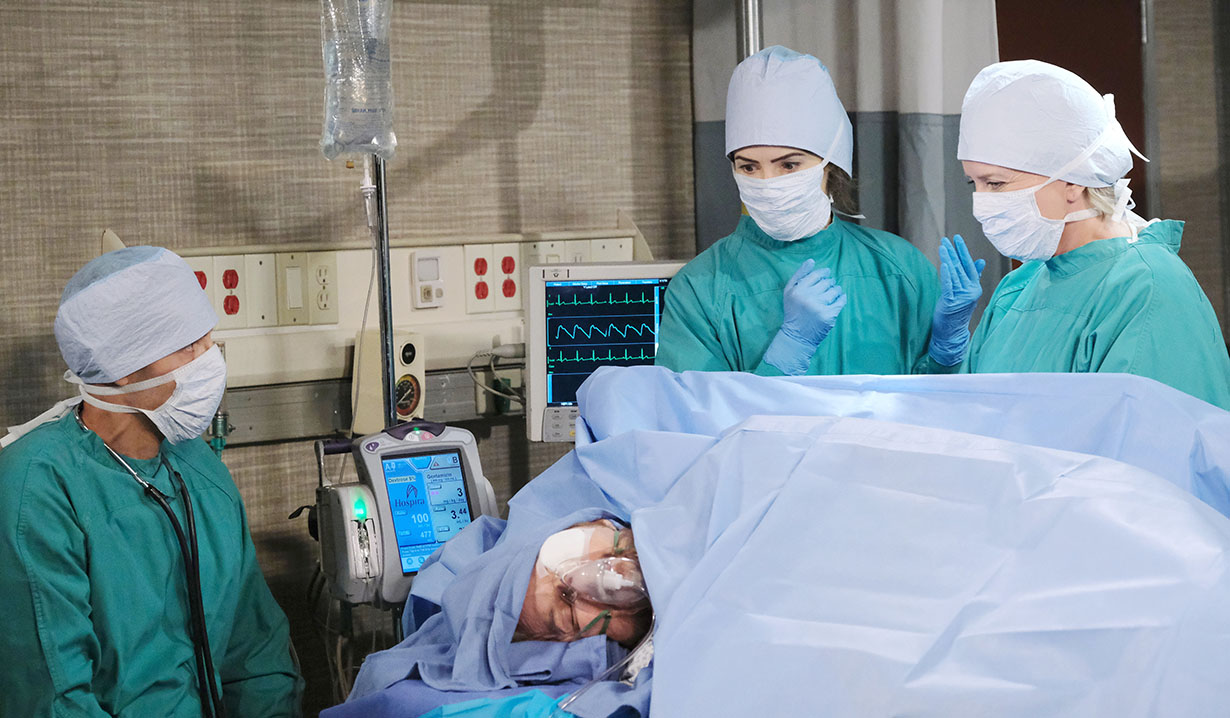 Ben and Ciara arrive at their Salem Inn room. Ciara’s blisters have blisters. Ben couldn’t get past the receptionists and Ciara wasn’t hired today either. He takes off her spiked heels and rubs her feet as they discuss work and eventually make out. Ciara pants and the clothes start coming off. 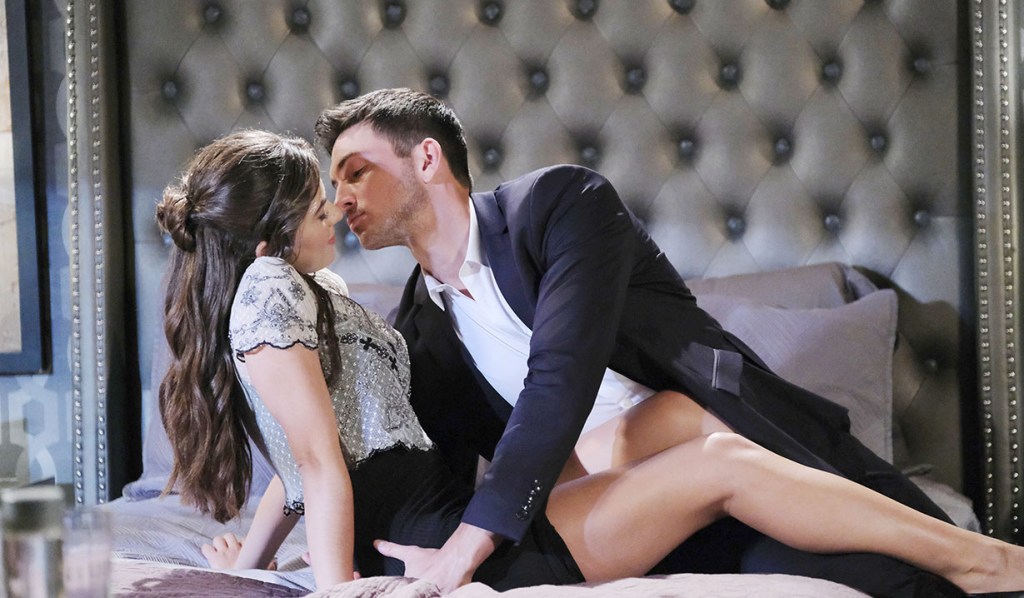 Xander arrives with Sarah’s dress bag. Sonny taunts that he’ll have no guests at his wedding. He’s not sorry he wasn’t invited. Xander wants him to be there. Sonny’s shocked. “In fact, I was hoping you’d be my best man.” Sonny shakes his head. Why would he do that? Xander’s trying to be a better person. Sonny knows that didn’t stop him from screwing him and Will over. Xander’s sorry he and Will became collateral damage. Sonny tells him where to stick his olive branch.

More: Aurora Teagarden’s An Inheritance to Die For recap

At the hospital, Nicole suggests to Eric that they head home. Eric glumly wonders how to tell Sarah their daughter is dead. Nicole once again suggests he keep quiet and raise his brother’s kid as his own. He looks at her as if she has two heads. Brady and Kristen deserve to know they have a daughter and Sarah needs to know what Xander has done since she’s marrying him. They head to the mansion so Eric can kiss Mickey goodnight as her father one last time. By the hub, Jack brings Justin a double macchiato. Neither will be sleeping tonight, as they wait for Steve’s operation to end. Jack says the fact that Kayla’s operating is a testament to how badly she wants Steve back. Justin knows they had a special kind of love and admits he doesn’t want to lose Kayla, but no outcome of this surgery works in his favor. There are only three outcomes: Steve dies and Kayla never forgives herself; the real Steve returns, or Steve live but is never the same. 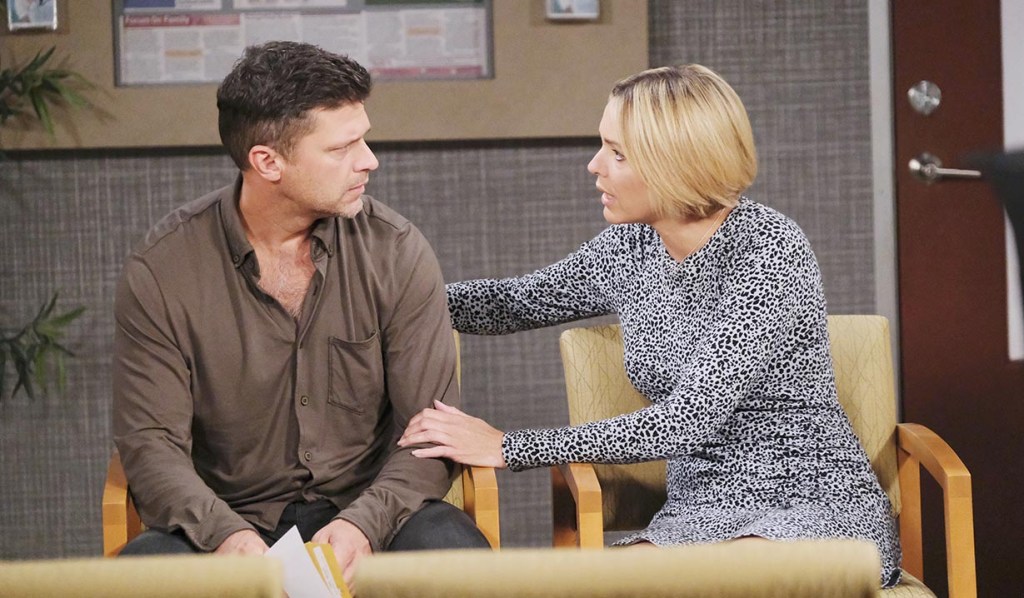 In the OR, Kayla and Sarah begin surgery on Steve, hoping to get rid of the Phoenix once and for all. Soon, Kayla learns that the location of the chip is surrounded by tissue. She’d have to cut through the vital areas of the frontal lobe. She could destroy Steve. She decides to sew him up and decide on the best course of action. The chip starts beeping. A voice says, “Self destruct mode engaged.” It counts down from 2 minutes to 1 minute and Kayla says she was afraid of this. She ushers everyone out of the room except Sarah and at the 30-second mark, she removes the chip. Steve’s vitals are stable but Kay worries about what she’s done to Steve. Kayla goes into the waiting room to update the men on Rolf’s chip sabotage. Justin comforts her. No matter what happens, he’ll be there for her. They embrace. Kayla sits at Steve’s bedside and asks him to come back to them as Justin watches from the window.

At SPD, Rafe tells Evan that the feds took Orpheus to a facility for questioning with the lawyer they share. Evan’s stuck there until that situation is resolved and it could take a while. Unless he wants to enter a guilty plea? Evan laughs. He’s not stupid. Rafe says they have hard evidence to prove he kidnapped David but if he helps them put his father away, they’ll enter a deal. Evan insists he’s a good guy but Rafe reminds him he murdered Jordan. Evan wants to make a call. 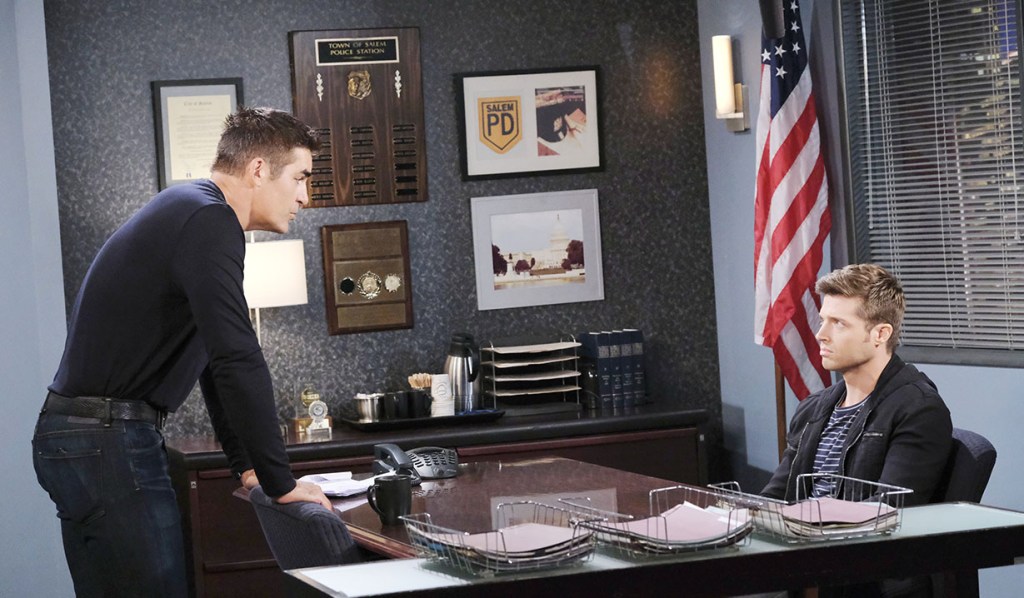 Back at Salem Inn, Ben and Ciara’s make-out session is on pause when Ben takes a call from Evan who wants to see him. Ben’s not so sure. They disconnect and Ciara encourages him to go. “Get closure.”

Ben and Ciara turn up at SPD. Rafe invites Ben to see David, who is “talking a mile a minute.” Ben would like that. He heads in to see Evan alone. Evan apologizes for killing Jordan and almost letting Ben fry for it. Ben is skeptical. Evan says he lost it when Jordan told him he couldn’t see his son. “You know what it’s like to lose control,” Evan says. “This is your apology,” Ben says tightly. Ben yells that Evan only confessed when there was a gun to his head. Evan admits he loved David more than confessing. Ben wonders how David will feel the day he learns Evan killed his mom. Ben returns to Rafe and Ciara, glad to never see “that bastard again.” 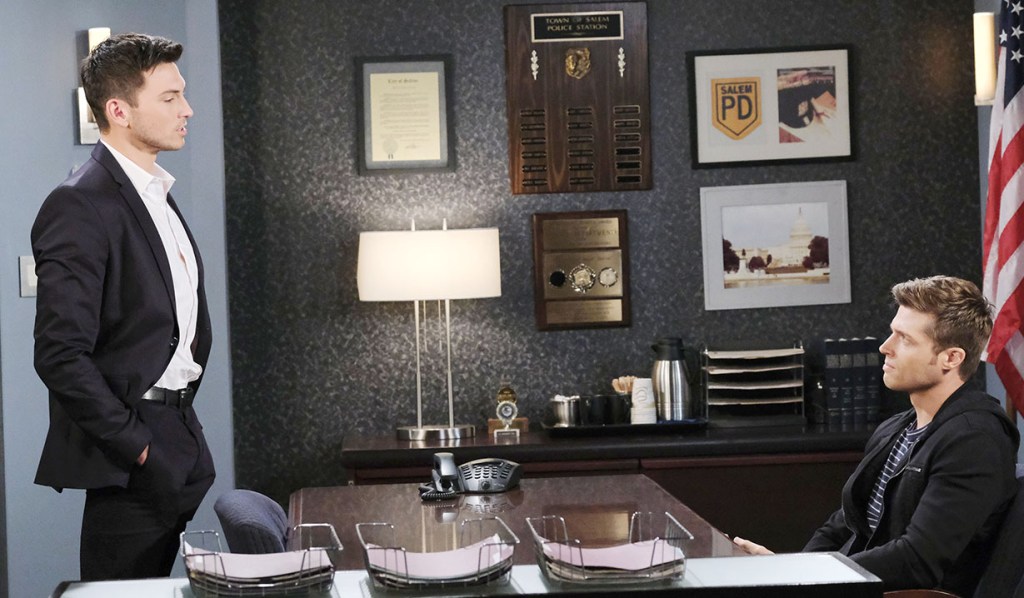 Eric and Nicole arrive at the Kiriakis mansion, demanding to see Mickey. Xander says she’s asleep. They’re not asking. Eric gets in Xander’s face and alludes to knowing what he’s done. They head to see Mickey and again Nic pressures Eric to consider lying to his brother. Eric can’t do that. He tells an awake Mickey he loves her no matter whose daughter… he breaks down.

Back at Salem Inn, Ben sadly reminisces about how close he and Jordan were, how she protected him. He’s grateful for all Ciara has done for him. They have hot, passionate sex.

Sarah returns home and complains that was the most harrowing surgery of her life and they don’t know if it was a success. They drink and she’s glad to come home to Xandy. Nic and Eric appear but Sarah has fallen asleep and Xander refuses to wake her. He shows the duo the door.

Stevano Gathers His Children for One...

Eric Tells Sarah That Mickey Is Not...