Tuesday April 7, 2020: On Days of our Lives today, Stevano has a plan, Nicole and Eric are unable to tell Kristen and Brady the truth, and Sarah's excited to have her wedding gown. 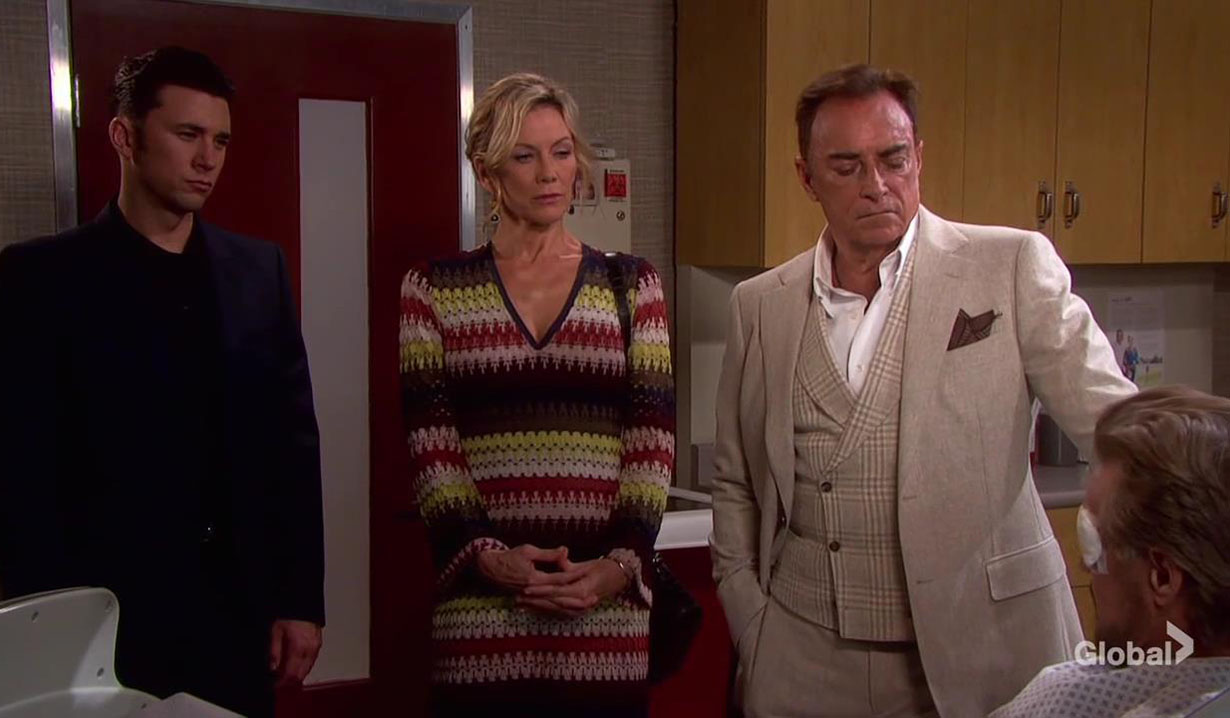 Chad and Abigail snuggle in bed while he laments that he could have lost her and the kids. They profess their love for each other and he’s grateful she brought him back. They smooch and make love. Downstairs, Tony takes a call from John and learns that Marlena’s made a full recovery. Anna finds that wonderful but wonders what’ll happen to Stefano. Tony jokes that she’s more worried about her shoes. Anna corrects him. She was worried about him. There are always more shoes. They kiss and he thanks her for saving his life. She knows if they bring Steve back, it might be the end of his father. What will that mean for Tony? Tony has mixed feelings about Stefano but is committed to a future with her no matter what. Anna loves him. She worries about Stefano manipulating him, Chad and Kristen to draw them back in. 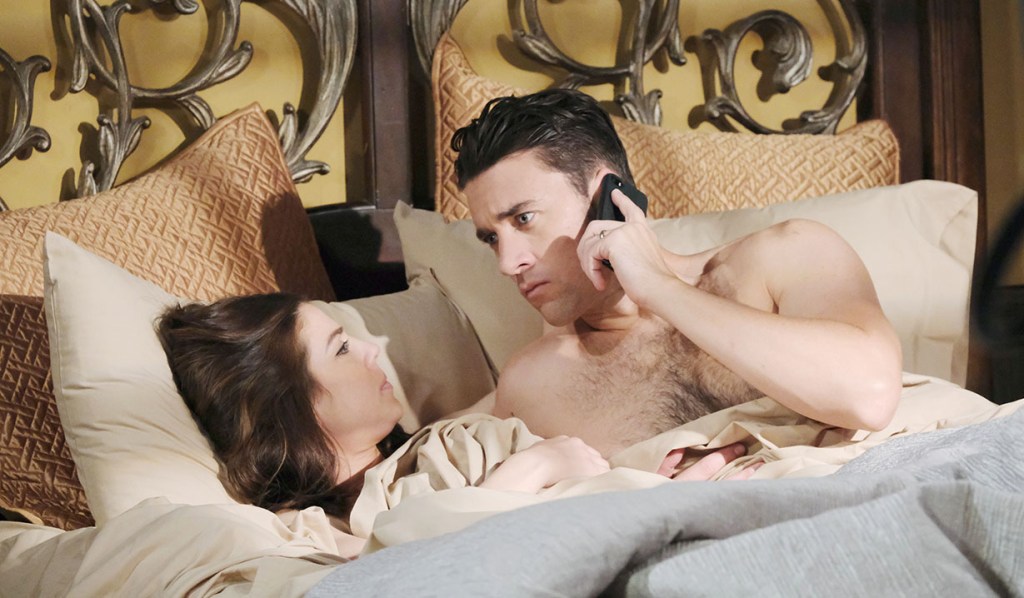 In his bed at the hospital, Stevano chuckles that this isn’t Checkmate – far from it. “They’ll see that the master still has a few moves left.” By the hub, Justin learns Rolf refuses to remove the plant in Steve’s head. Kayla must do something. She goes to check Stevano’s eye but he refuses that and all treatment. She calls him a jerk and he kicks her out but she’s staying. She plans on bringing Steve back. Stevano says she’ll never see him again. Kayla warns that she’s taking his chip out herself! She shows him a court order. He yells, outraged. He laughs at her indignance and asks what happens if she botches the surgery. She knows Steve would want her to try. She’s watched Rolf perform it twice and is confident. Stevano asks to see his kids one final time. Kayla goes to prep for surgery and pauses to talk to Justin, thanking him for being so grounding for her. She calls Chad to tell him about Stevano’s last request and Justin worries something could go wrong in surgery. Kayla’s terrified but doesn’t feel she has a choice. She calls Sarah.

At the Kiriakis mansion, Sarah does a happy dance because she got the dress she wanted, thanks to Nicole. Xander’s surprised Nicole would help her considering she’s marrying him. Sarah says nobody’s opinion matters except theirs. Xander loves how Sarah looks at him. Sarah says their little girl looks at him like he can do no wrong, too. They embrace and talk about missing Maggie. Sarah’s taking lots of photos so her mom doesn’t feel like she’s missed out. Xander says he’s got the honeymoon covered. It’s either Paris or the Caribbean. She’ll tell the pilot their destination – one of those places or somewhere else. She laughs. He’s brave. Xander would follow her to the end of the world. Sarah gets giddy and asks to take Mickey. When Kayla calls, Sarah jumps up to go to the hospital.

Brady and Kristen arrive at Eric’s, surprised to see Nicole. Eric says she just returned from New York with something to tell him. Brady tells them Marlena’s out of surgery and doing well. They turn to go and Eric asks them to stay. Kristen sees Holly’s doll and grins widely. Kristen says Nic told her she didn’t deserve to be a mother. Nicole shouldn’t have said that but Kristen says she deserved it. She offers to leave so she can talk to Brady in private but Nicole doesn’t want that. Brady asks what the big secret is. He worries for Nicole’s health but she’s fine. Kristen gets a text from Chad and has to go. Brady will go with her and asks if this secret will keep. Eric says to go. Nic asks if he’s going to tell them at all. He will. They need to know Mackenzie is their daughter. He needs to tell Sarah first. 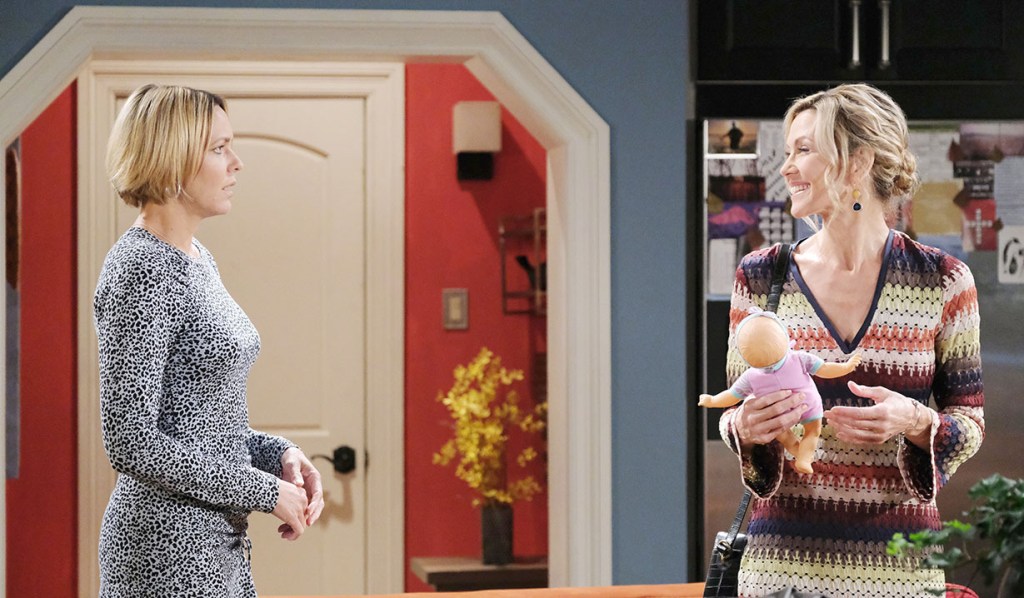 Stevano’s kids visit him at the hospital. Nobody looks happy with him. He thanks them for coming alone and apologizes for violating their trust. Kristen and Tony snort at that. Chad says they won’t help him this time. Stevano claims he only wants to say goodbye. He apologizes to each of them for his machinations. He’s wheeled into the hall and emotionally tells the kids he loves them. They say nothing but are emotional. In another room, Eric confronts the lab technician who changed the results for Mackenzie and Kristen. Nic wants the real results that show Kristen is the baby’s mother and nobody will know he gave them up. The lab guy goes to get the results and takes off. Eric reads that he’s not Mickey’s father and looks pained all over again. Nicole cries as Eric says his little girl with Sarah is dead. Sarah walks in. She didn’t hear anything. “We need to talk,” Eric says. She has to dash now – she’s going into surgery.

From Titan, Brady finishes a call with someone from the hospital about the donation in Rachel’s name. He finds her birth certificate in Kristen’s desk drawer and Xander appears to pick up Sarah’s dress. He reads the birth certificate while Brady gets it and looks uneasy. There’s something he has to tell Brady. He’s truly sorry for Brady’s loss. Brady thanks him and Xandy goes.

More: Relive the original Dallas through the pilot recap

There’s a complication during the surgery to remove the microchip from Steve. 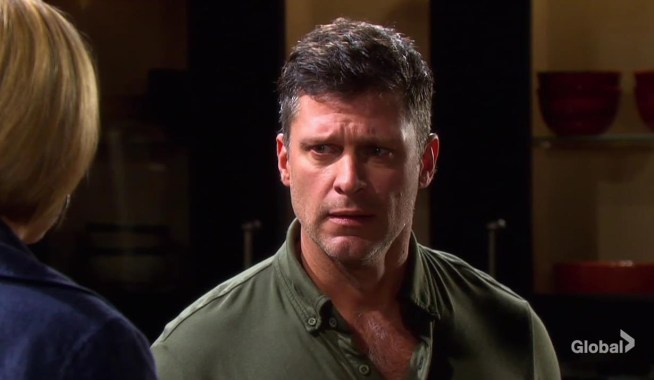 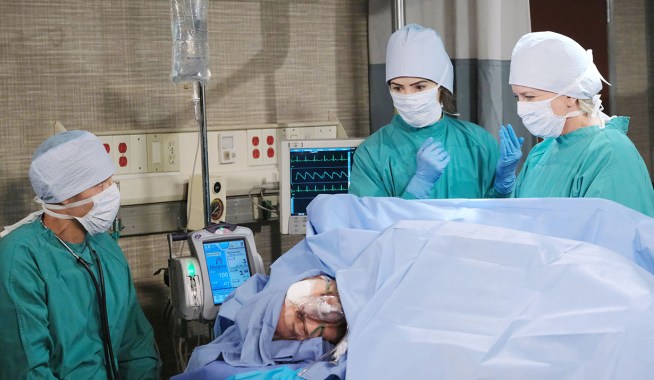