Tuesday March 31, 2020: On Days of our Lives today, Justin worries that Steve and Kayla will reunite, Ben and Ciara talk about getting jobs, and Brady and Marlena share a tender moment. 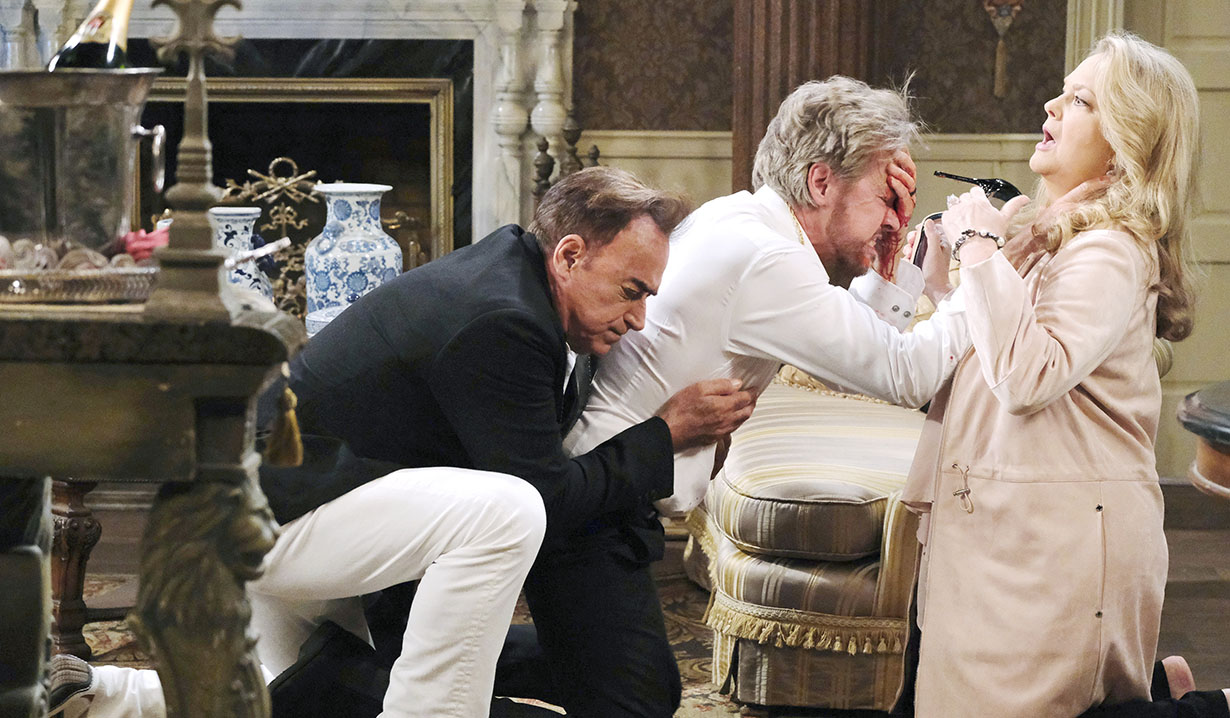 At Salem Inn, Ciara tells Ben that her mother’s starting to remember more about what happened while she was Gina. Ben thinks it’d be better if she didn’t. Ben recalls the drug being put into his arm to kill him in prison. Ciara stops him. She doesn’t want to hear about it. Ben continues. He remembers the look on Marlena’s face and hopes nothing bad happens to her. Later, Ciara asks if he’s still thinking about Marlena. It’s hard for him not to. He’s sorry. She allows it especially because he has a good heart. Besides, she’s been thinking of him too. She finds cookie crumbs in the bedding and she feeds it to him. She wants another kind of dessert. They kiss and discuss their future together. Ben wants to take care of her. He needs a job. Ciara wants to ask Victor but Ben reminds her he’ll only try to control him. He wonders how much a room at the Y would be. Ciara bursts out laughing. She’s going job hunting too and isn’t staying at the Y.

At the new Maison Blanche house, John and Marlena hug and kiss in her bedroom. John asks why Kristen’s there. She says they were invited for a…Marlena interrupts. “A wedding?” John wants to find Stefano. He’s not done with him yet. Downstairs, Chad has locked Brady and Kristen in a room. Abigail finds Chad and rails on him for what he’s been up to. Meanwhile, in the lounge, Anna stabs Stevano in the eyeball with her high heeled shoe. Blood spurts everywhere. Tony’s jaw drops in shock as Stefano groans on the floor in pain. Anna notes that Steve Johnson seems cursed with that eye. Stefano rants that he’s not Steve Johnson and she’ll pay for what she’s done. He throttles her as Tony tries to pry his father off of his wife. Chad appears and assesses the situation. He pulls out a gun ready to kill Anna. Abigail arrives and tells Chad to put the gun down. Stevano says La Famiglia and Abby tells him she, Thomas and Charlotte are his family. Chad looks from her to Anna as Stefano writhes in agony on the sofa. Abby tells him his father needs help. He can deal with Anna later. Chad drops the gun and Abby gives Stefano a scarf to put on his eye. She holds the gun to Chad’s head. John, Kristen, and Brady appear. John starts gloating. He takes the gun from Abby and asks Stefano if his zombie son was his best man. He calls Stefano names and is met with laughter. Stefano’s kids take him to the hospital. 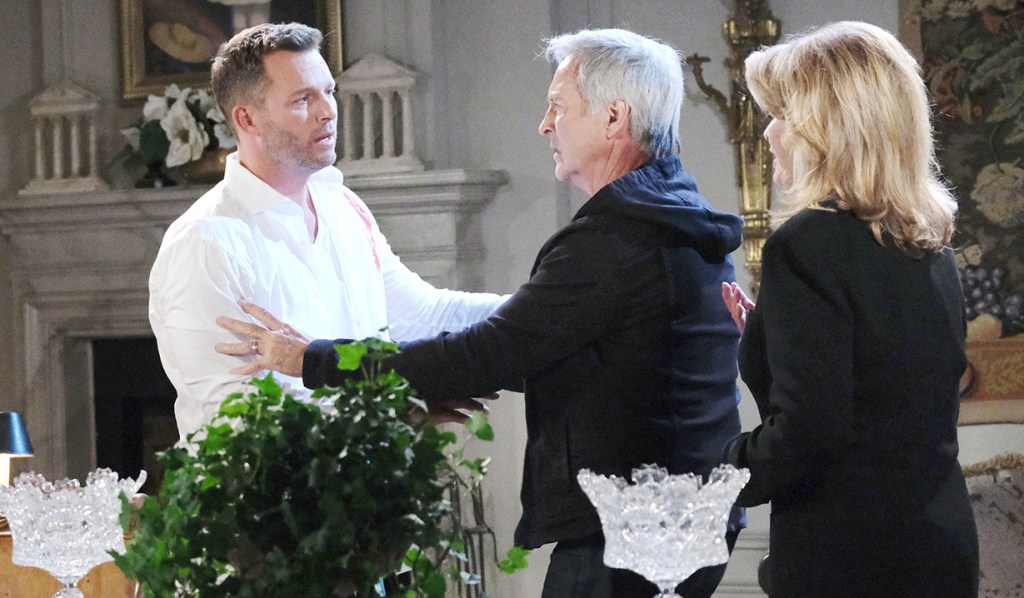 At the hospital, Justin finds Kayla who says she just finished putting Hope back to her room. She updates him about waiting on word from John about what’s happened with Marlena and rants about Steve doing all of this to Marlena. Justin reminds her this is not Steve. Kayla worries for Steve too. Justin understands. He still feels the loss of Adrienne. He knows they’re good together but what happens if Steve is Steve again? Kayla doubts Rolf would go along with operating on Steve, knowing it’d erase Stefano from the planet. Justin says they need to do what it takes to bring Steve back but he’s afraid he’ll lose her if they do. Kayla holds his hand. No matter what, Kayla says he’s been there for her and she’s grateful. She loves him. Steve arrives with Tony and Anna and is taken to a room. 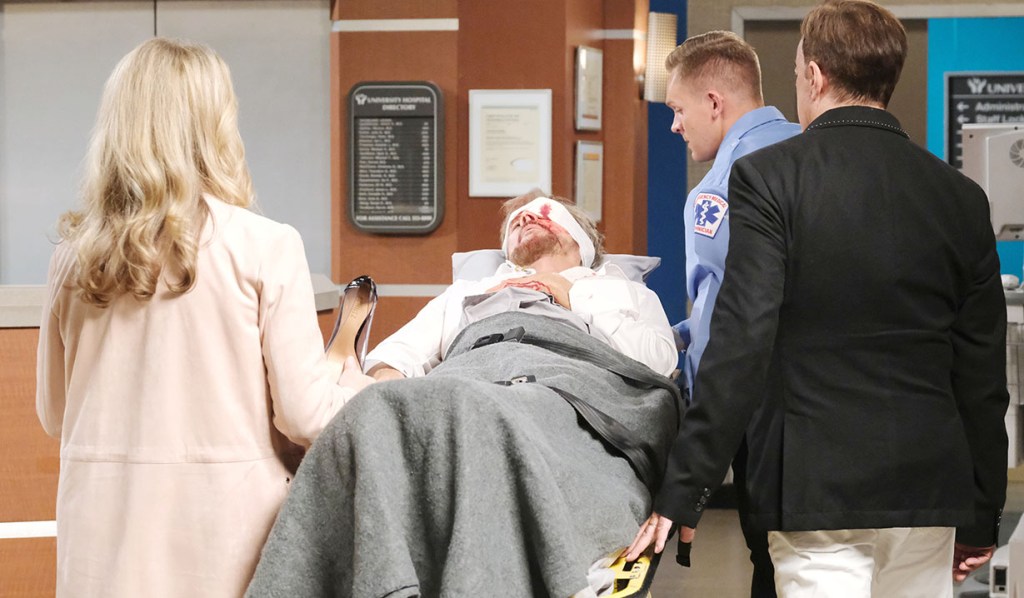 Back at Maison Blanche, Marlena needs a shower. Brady comforts her when she complains about marrying a man she loathes. She thanks him for saving her and they laugh about him taking a bullet for her. He thinks it’s payback for how he treated her in high school. She’s his mom and he loves her. Marlena loves him. Brady tells her how Kristen has changed and wanted Stefano to give Marlena up. Marlena listens and agrees to take one day at a time with Kristen. They hug, while downstairs, Kristen says this was a weird night. “Fairytale wedding meets Invasion of the Body Snatchers.” She spent her life being like him and came face-to-face with the undeniable fact that the man she devoted her life to is a pathetic loser. Chad calls her a traitorous bitch. Kristen goes as John shakes Chad and says to shut up. Kristen and John appear upstairs. John tells them that Steve got hurt. Marlena’s worry confuses her. John says they’ll take care of the chip in her head. Downstairs, Abigail tries to get through to Chad. They kiss and Chad snaps out of it. He asks why he’s tied up. “What did I do?” Abby grins as she unties him. He kisses her. He’s back. All he needs is her and their kids. He takes off the phoenix ring, making Abby cheer. 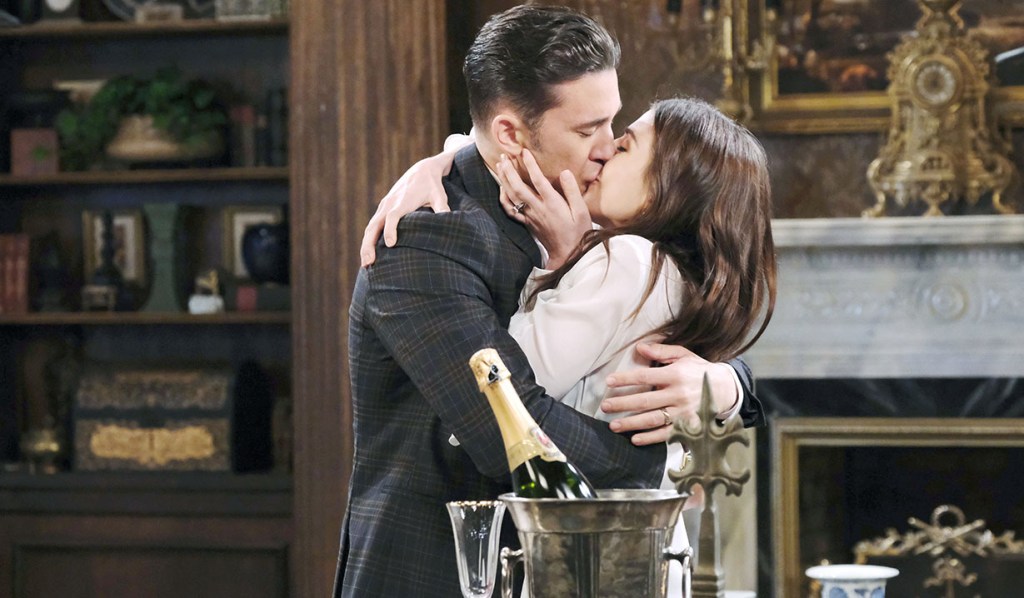 Eli gets a big surprise.

Sonny and Will aren’t happy to see an enemy turn up at their door.

Nicole’s stunned by who turns up on her doorstep. 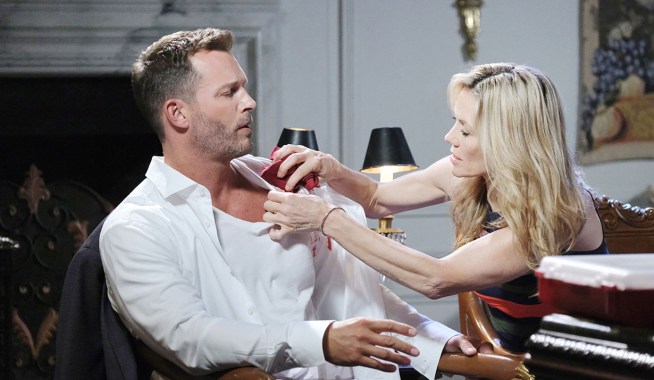 It’s April Fool’s Day in Salem and Daniel, Leo and Sheila Turn Up to Cause Trouble 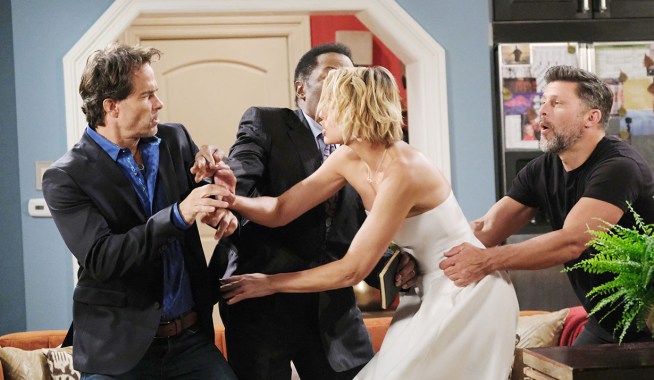