Monday March 30, 2020: On Days of our Lives today, Eric catches Abe and Nicole in a private discussion, Abigail and Anna are manhandled by Stefano's new goon, and Marlena comes back to John. 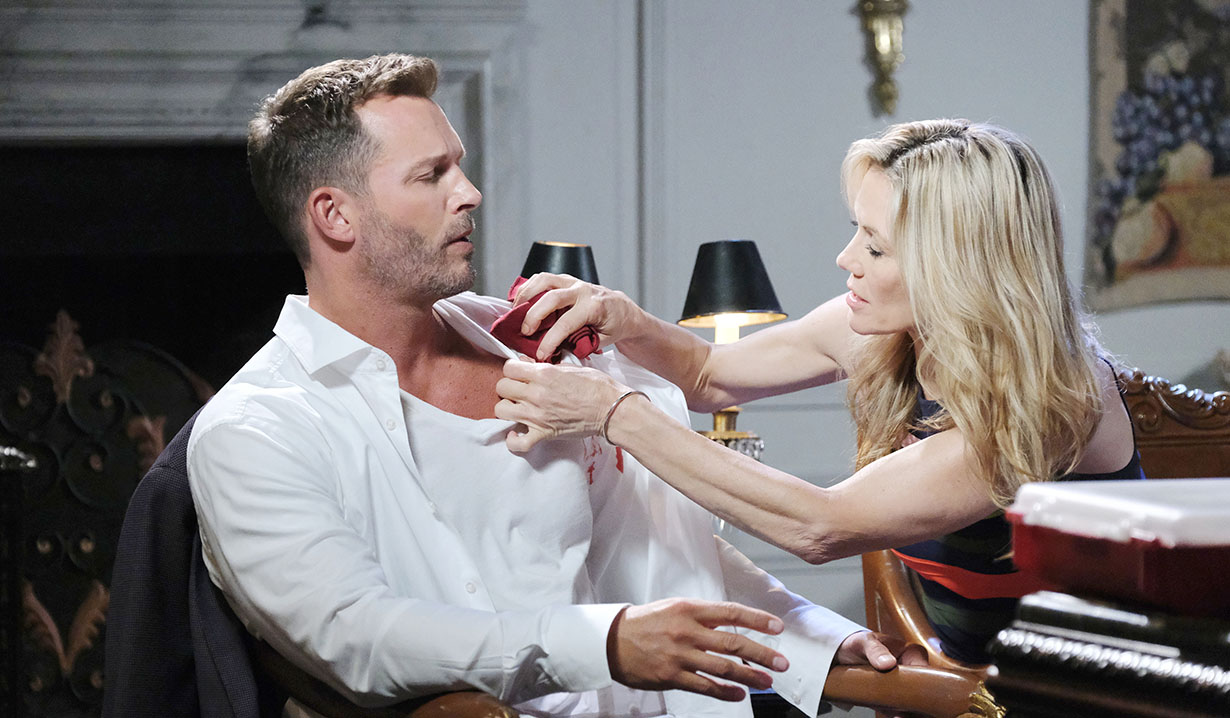 At the Kiriakis mansion, Sarah gets Mackenzie settled into a playpen, amazed she’s cancer-free. Sarah’s sorry there’s no news on his mom yet but she trusts John to find her. Xander appears and gives Eric the boot. Sarah’s annoyed. Xander asks about his relationship with Nicole and Eric says it’s none of his business. Eric takes off and Sarah tells Xander off. They make up and kiss on the sofa until the baby cries. They decide to get married tomorrow.

Abe turns up at Eric’s. He’s glad to hear Eric and Sarah took Mickey home today. Nicole says Holly’s in bed and Abe notices she’s reading the DNA results. She can’t believe they’re real. Abe says they can find out by talking to Dr. Raynor. He tracked her to New York City and hands over an address. Eric walks in and almost overhears. She lies that Brandon’s going through a rough time and doesn’t want people to find out. Eric’s sorry. Abe takes a call from Kate. He tells the others that Anna may have located Stefano’s hideout. He heads out. Nicole thinks this means they could find Marlena. Eric’s worried about Nicole’s test results but she reassures him. He smiles, thankful they got back together. He wants to get takeout but she has to go to New York on business. 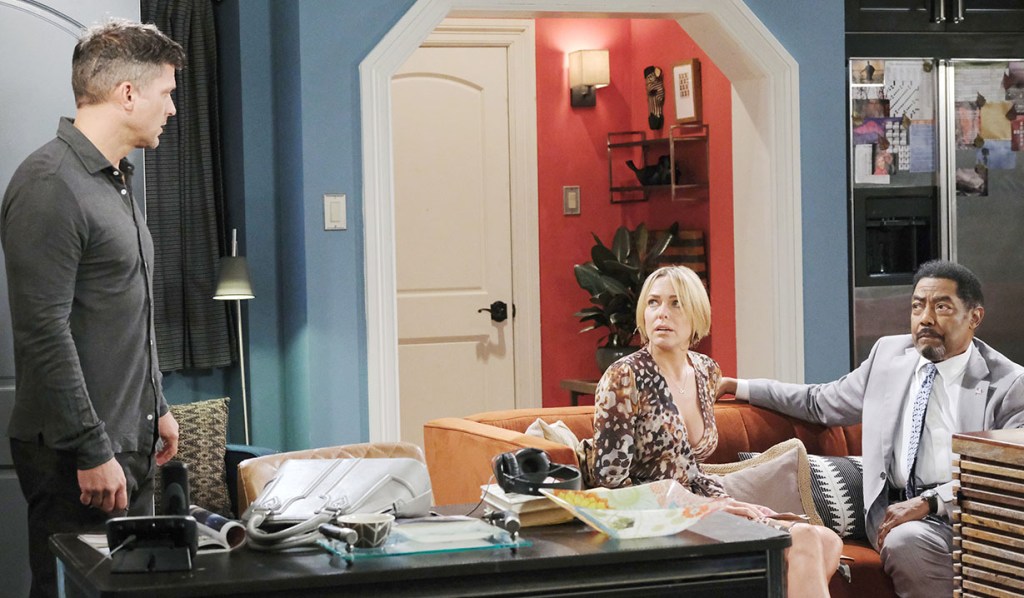 More: Station 19 spoilers up to April 9

Anna and Abigail wind up outside the new Maison Blanche. Abby’s worried about going in but a goon, (played by Owen Saxon), appears. They’re not going anywhere. Anna introduces them and the goon calls them intruders. Anna pretends Abs has a head injury and needs medical assistance. The goon goes through Abby’s purse and says he’ll call Stefano but they’re too late anyway. The wedding is over. Inside, Kristen and Tony try to get through to brainwashed Chad. Kristen slaps him and says The Phoenix has him under a spell. She grabs his face. “Come on, snap out of it.” Chad pulls his gun and strangles Kristen. Brady appears and orders Chad to put the gun down. Tony tells him that Chad’s been reprogrammed. Kristen calls him a puppet. Chad holds his gun to Kristen’s head and forces Brady to hand over his gun. Chad plans on killing them all and Brady rushes him, yelling, “No!” Upstairs, Marlena and Stefano make out on the bed until John appears and tells Stefano to take his paws off his wife. “Ex-wife,” Stefano says. John grabs the man and they struggle on the floor. They punch each other until John pulls a gun and says, “That’s enough.” Marlena smashes John over the head with a vase and Stefano barks out a laugh. “Well done my queen.” John’s tied up when they hear the shot and Brady’s voice. John hears Brady’s voice and mutters, “Brady.” Marlena takes Stefano’s gun and offers to finish the job while Stefano heads downstairs. John tells his wife she doesn’t have to do this. She needs to purge him from her body and soul. John loves her so much and tells her she doesn’t have to kill him. He asks her to think of their kids and grandkids. He cries that Brady loves her so much he came with him tonight. He worries Brady was on the wrong side of that gunshot. “You are a doctor!” John yells. John sobs and begs and reminds her she saved him when he didn’t know who he was – because her love was always stronger than his hatred. Marlena calls Stefano the king and herself the queen. “No you’re not,” he says. John keeps talking, telling her he didn’t sign divorce papers and that they’re married. Marlena says Stefano took her to Paris and John counters that she was kidnapped. He repeats his vows and Marlena starts to cry. Eventually, she comes around and wraps herself around his leg, sobbing. 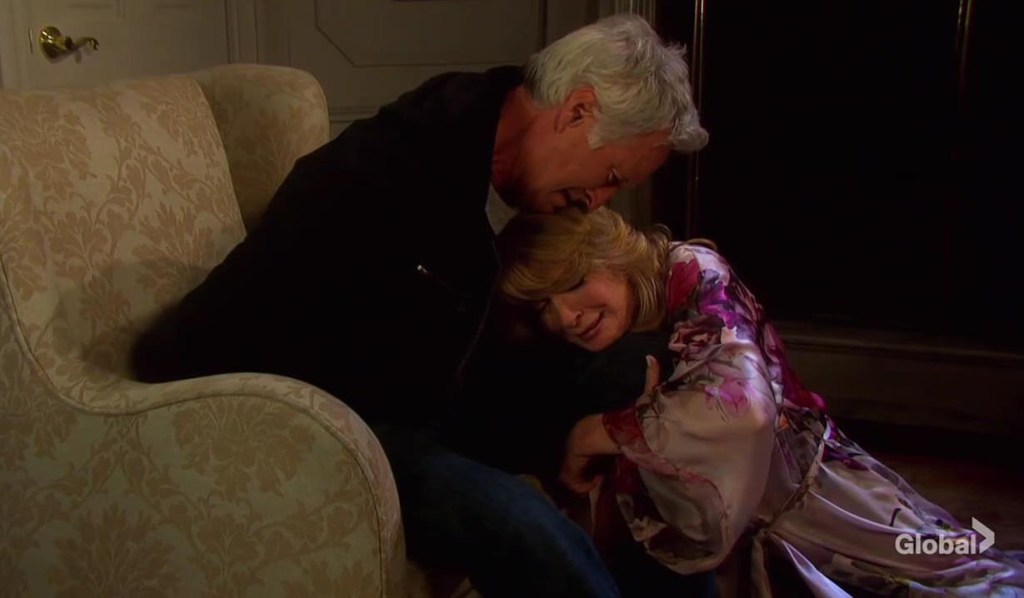 Downstairs, Kristen snaps at Chad and cares for Brady’s wound as Stefano barges in. He notes John didn’t come alone. He allows Kristen to fix Brady’s wound. Kristen tells him Marlena really married Stefano. “Dr. Rolf got a group rate on mind control.” She looks at Chad, “Exhibit A.” Back outside, Anna knocks the goon out by hitting him over the head and they wander inside. Abby finds Chad, while Stefano pulls a gun on Tony just as Anna appears. She hits him in the face with her high heel and Stefano goes down, yelling. 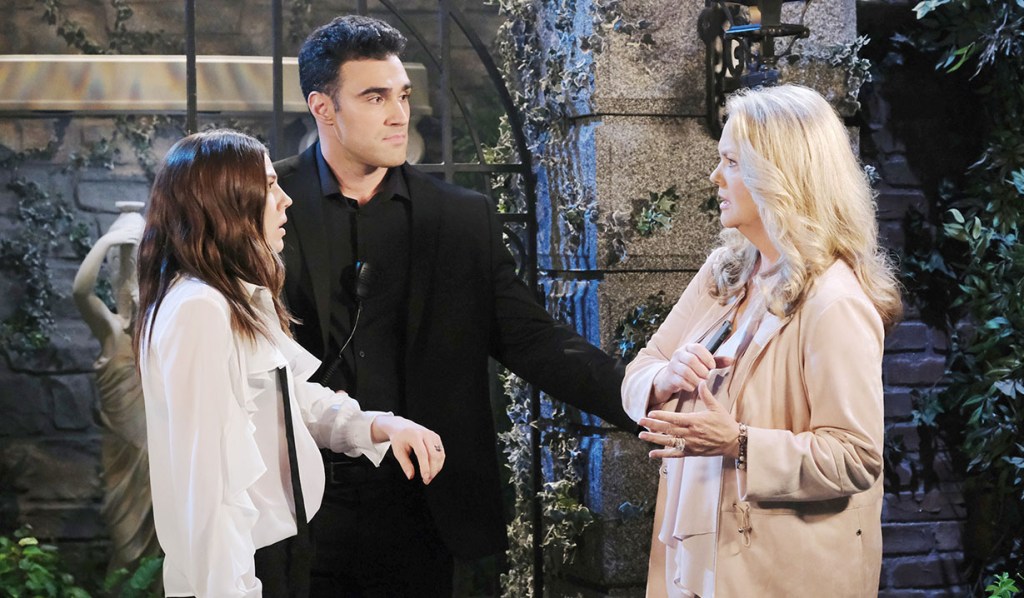 Abby tries to break the spell over Chad.

Ben and Ciara talk about their future together.

Tony and Kristen Are Forced at...

Stevano Is Rushed to the Hospital...