Friday March 27, 2020: On Days of our Lives today, Tony and Kristen are shocked when Chad pulls a gun at them, Marlena's confused about her feelings, and Abby saves Kate and Gabi. 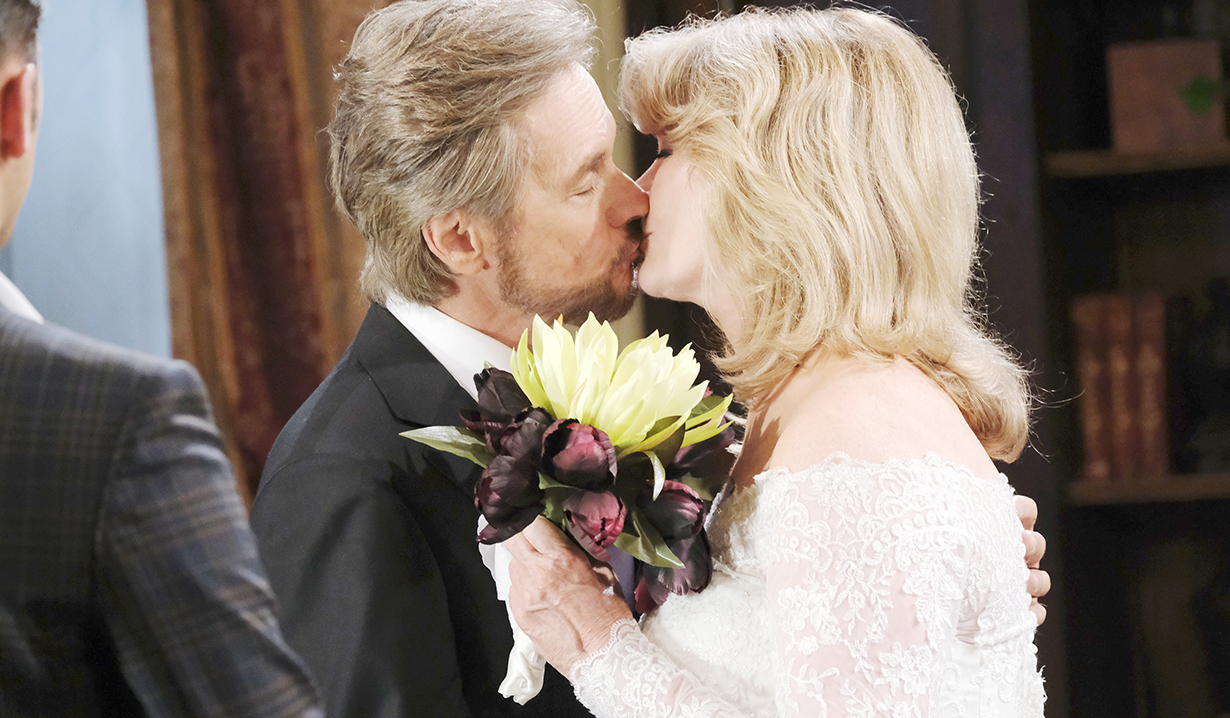 Kayla catches Hope getting ready to release herself from the hospital.

At the DiMera mansion, Anna sends Tony a text looking for him. Abigail isn’t worried about Chad being in danger. Anna thinks that’s naive. They need to get their husbands out of that meeting. Abby receives a text from Will asking if she’d seen Gabi who never picked up Ari. Abigail worries and goes to the nanny to see if she saw Gabi. In the secret room, Kate doesn’t want Gabi to knock Chad out but Gabi says it’s him or them. Abs returns to Anna. The staff hasn’t seen Gabi or Kate in 24 hours. Abby is worried. She is reminded about joking with Chad about hiding tramps in the house and shares the story with Anna. Abigail heads into the tunnels to be sure there’s nothing there but rats. Abby lets herself into the secret room and gets hit over the head by the champagne bottle. Gabi looks shocked and Kate gasps, “Oh my God, Abigail.” Abby comes to and the women tell her that Chad locked them up. Later, the women head to the lounge and Abby is stunned to hear that Chad has been brainwashed and was about to kill them. She reads Stefano’s letter to Chad and realizes Chad’s been off since she returned from South Africa. They wonder how to find their husbands. Anna has an app on Tony’s phone to find him. 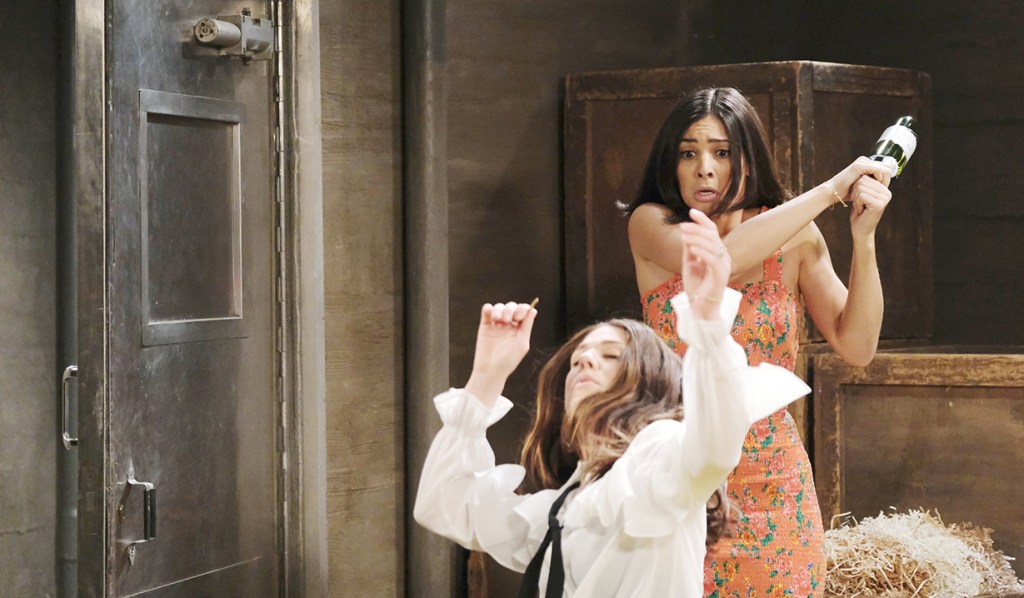 At the new Maison Blanche, Tony and Kristen doubt Marlena will ever marry Stevano. Tony calls it impossible but Stefano’s confident. Upstairs, Marlena’s dressed in her gown and hears John tell her not to marry Stefano. She grins. She knew he’d come for her and tells him she’s not sure what’s happening here but she knows it’ll be fine now. She loves him so. He disappears and she frets, but then hears Stevano asking for her to marry him. Downstairs, Andre assumes he and Rolf brainwashed Marlena. Kristen agrees. This lack of support disappoints Stefano so Chad pulls a gun on his siblings. He tells them to embrace this or else. Kristen and Tony try to talk Chad down but it’s no use. Chad demands their phones and they reluctantly hand them over. Kristen demands to know what Father has done to Chad. Chad says Father showed him they needed to restore the DiMera family back to its former glory. Tony realizes Chad’s been brainwashed. Marlena arrives. She tells Stefano nothing could make her happier than becoming his wife. Kristen reminds Marlena she loves John. Marlena insists she loves Stefano now and Kristen can see she’s been brainwashed. Tony asks Father not to take advantage of her in this state. Tony and Kristen are forced to stand up for the couple as Chad officiates. When he asks if someone would like to speak out against the union, Tony does so. Kristen stops him when Chad reaches for his gun. Stefano says he’s waited decades for this. They say their I dos and exchange rings. Halfway through the ceremony, Chad stumbles over pronouncing them, husband and wife. He eventually does and Stefano kisses Marlena. Tony and Kristen mutter under their breath about the ridiculousness of the wedding and Marlena throws her bouquet at Kristen who asks her to rethink this. Stefano takes his bride upstairs to begin his honeymoon. Tony whispers that he turned on his ‘find my phone’ app. Kristen tries to snap Chad out of it by hitting him and he pulls a gun on her and strangles her. 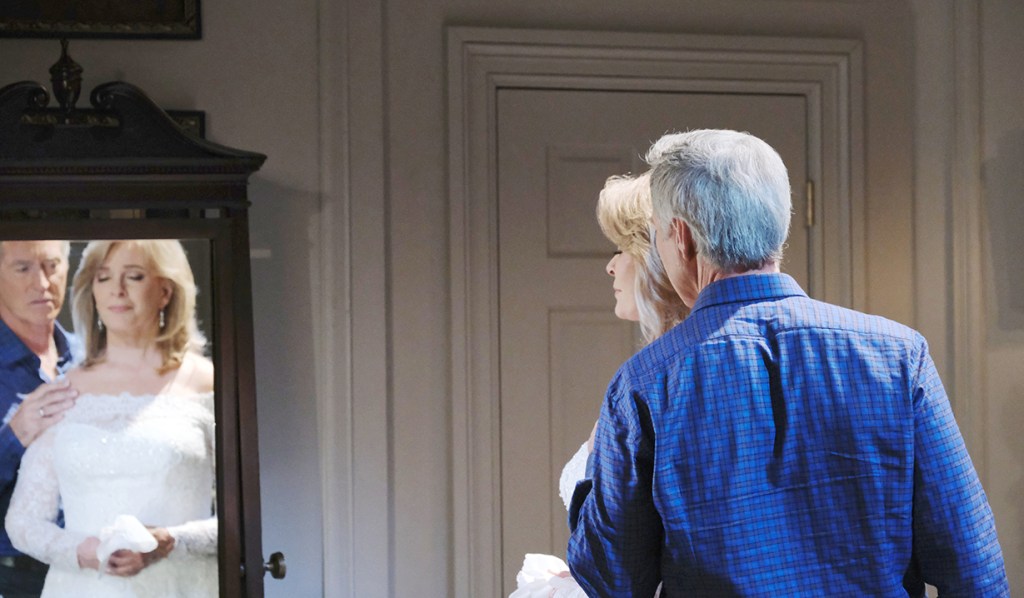 More: Flashback to John The Pawn’s foray into Salem

At the townhouse, Brady doesn’t think Stefano can rewire Marlena’s heart. The love they have is unbreakable. John knows and he’ll be damned if he lets Stefano take his wife to bed. Hope and Kayla turn up. Hope starts apologizing for what she did to John as Princess Gina but John knows she’s not responsible. They embrace and John fills the women in on Stefano’s plans to take Marlena to bed. Kayla’s frustrated. Steve is Stefano 100% and has the resources to vanish. What if they never find him? Kay and Hope read Stefano’s note about the queen being his forever and John receives another note at the door. It’s an invitation to Stefano and Marlena’s wedding at Maison Blanche. Hope remembers Stefano said he was building a new castle for his queen at Crystal Lake, outside of Salem. 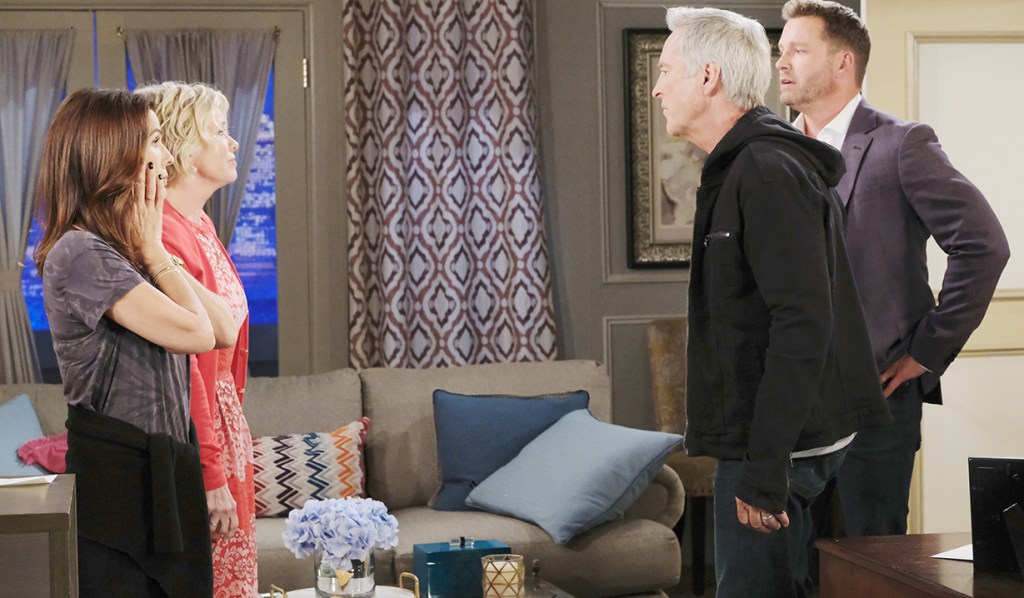 Brady rushes into Maison Blanche, gun in hand as Chad’s strangling Kristen. Meanwhile, upstairs, Stefano and Marlena kiss. Marlena pulls away and then they make out like bandits on the bed. John races in…

<p>Brainwashed Chad holds a gun to Kate and Gabi, intent on killing them for La Famiglia. Chad gets a call from Stefano ordering a stand down since he has more important things to do like marry Marlena. </p>

<p>Gabi and Kate are stuck in the cellar at the DiMera mansion. Gabi gets an idea in her head to drain the champagne bottle so she and Kate can use it to pop Chad over the head when he returns to kill them. They get more than they bargain for when Abigail turns up instead of Chad. Gabi hits her and is horrified to realize what she’s done.</p>

<p>After Abigail saves Kate and Gabi, the women, including Anna, try to figure out where Chad has gone. They discuss the brainwashing.</p>

<p>John shows Brady the note that Stevano left in the divorce decree package. It tells how he has won his queen and John has lost her for good.</p>

<p>John and Brady enlist help from Hope and Kayla. They share news that Stevano has Marlena and that he’s somehow forced a divorce on John and Marlena. They wonder how to find her.</p>

<p>Stevano and Princess Gina flashback. Stevano discussed his plan at the old loft to be with Marlena forever. He told Gina he was building a new Maison Blanche at Crystal Lake outside of Salem.</p>

<p>Stevano is pleased his wedding went off without a hitch. He finally married his ‘queen of the night’ and shares drinks with Chad, Kristen and Tony.</p>

<p>Marlena somehow feels John reaching out to her in her mind. She remembers loving him but is unable to hold the thought.  </p>

<p>Stevano kisses his bride, his queen of the night, Marlena. The wedding took place at new Maison Blanche in Salem.</p>

<p>Stevano’s kids, Kristen and Tony balk at him marrying Marlena. They need to tell John where she is. Stevano refuses and wants their loyalty. </p>

<p>Stevano kisses his bride Marlena on their wedding night. They’re in her bedroom at new Maison Blanche. </p>

<p>Brady appears at new Maison Blanche mansion Friday. He finds Chad with a gun and Tony and Kristen. He’s ready to do what he can to save Kristen and Marlena, but something terrible happens come Monday.</p>

Stevano Proposes to Marlena and...

Brady Takes a Bullet Meant for...