Thursday March 26, 2020: On Days of our Lives today, Anna and Abby are suspicious of Chad, Hattie makes a decision about her future, and Chad convinces his siblings to attend a big event. 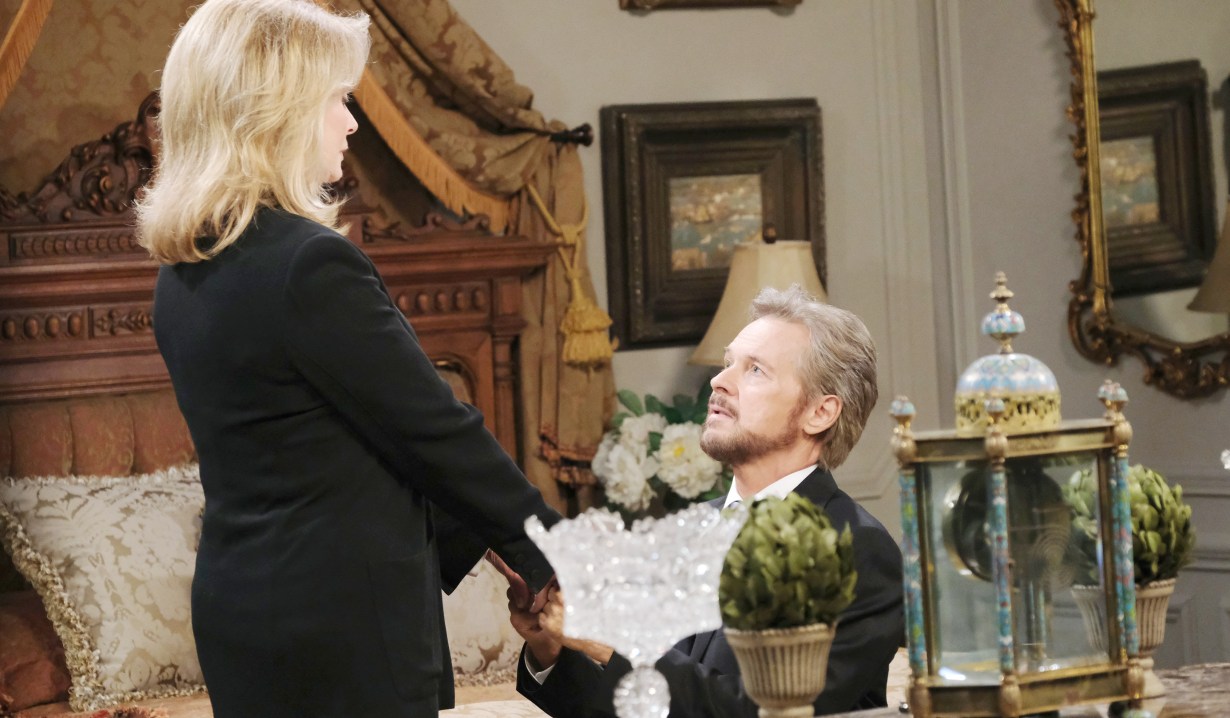 At the hospital, Kristen receives an urgent text from Chad about family matters. Brady asks her to ask Chad if there are leads on Steve. She assures him she will and takes off.

In her room above the pub, Hattie packs as Roman asks her to stay. He’s so impressed by the woman she’s become. She’s indispensable to the Brady pub. She’s become important to him and the pub and Marlena. Hattie makes Salem better. She has a home there which is why he doesn’t want her to go. He tells her he’s not the only guy in the world for her. There are lots of guys who would be lucky to have her in their life. She knows and dumps Roman. Roman finds that understandable. Hattie thinks she could make him fall for her if she wanted to. Roman calls her one of a kind. She thanks him for everything. He thanks her for her kindness and laughs and for being such a good friend. She goes.

At the new Maison Blanche, Stevano feels he and Marlena are growing closer. He enjoyed dancing with her last night. She calls the evening “eventful” but couldn’t fall asleep since she was thinking about someone else. Stevano clutches a pawn in his hand. John is her past. Marlena was thinking of Kate. She asks him not to kill Gabi or Kate. He won’t listen so she threatens to leave. He agrees to stop it and tells her to go upstairs and find a present in her closet.

At the townhouse, John yells at someone on a call about Stefano not leaving a trail. He gets the door and sees a package. He opens it and clutches his chest. Brady appears and John shows him a divorce degree dated today. Brady will check on the shady lawyer who drew this up. John reads a letter from Stefano telling him he’s a pawn and that the queen is his now and forever. It’s signed S. Brady goes off and returns later and tells John that Steve was alone this morning when he went to get the decree. John thinks they can track him down and he’ll lead them to Doc. Brady admits Steve said he and his fiancee are marrying tonight. John has a meltdown. 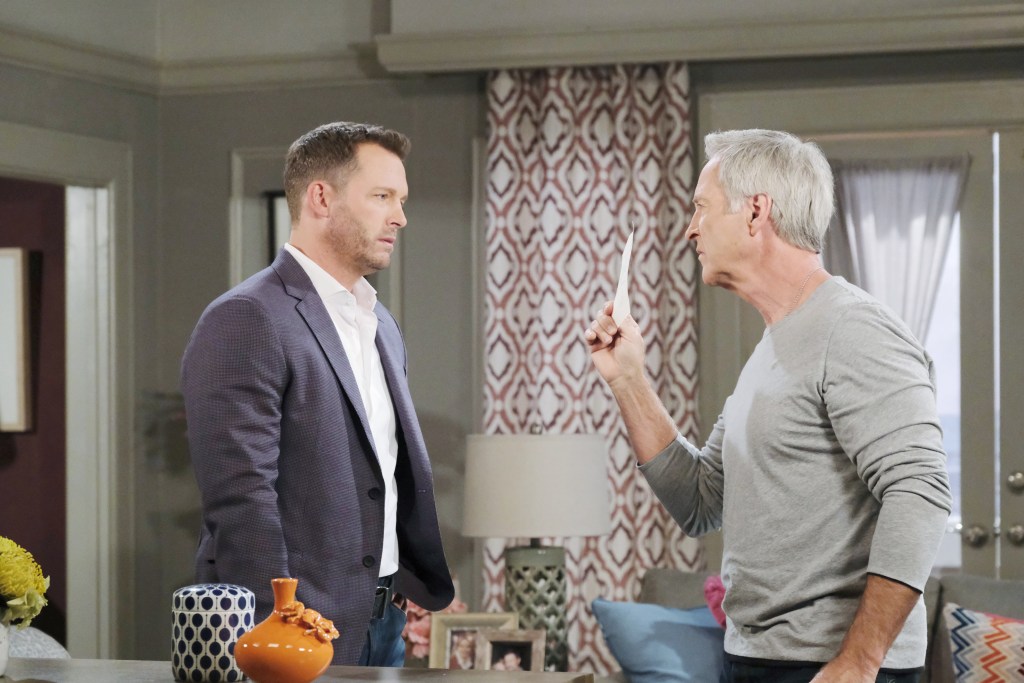 Abigail can’t find Chad at home so assumes he’s in the tunnels chasing the rats. Meanwhile, in the secret room, Gabi and Kate are starving when Chad appears, gun in hand. Kate says he doesn’t want to kill them. “Yes I do,” he disagrees. Kate tells him Stefano’s brainwashed him. Upstairs, Anna and Tony surprise Abigail. They were told to gather for some family business. Abigail hadn’t heard. Anna’s sorry. Kristen waltzes in. She didn’t know Anna would be there. Anna’s just as unhappy to see Kristen. They ask where Chad is. Abby tells Kristen they’ve had a pest problem and thinks Chad’s in the tunnels handling it himself. Kristen asks if that’s really what’s going on in there. Is Stefano down there? Kristen wants to see for herself. In the secret room, Chad says Kate’s searching. Kate knows his father was brainwashing him this whole time. Gabi urges her to show Chad the letter. She reads the trigger word ‘La Famiglia’ to him and Chad cocks the gun. He receives a call and leaves the room. Gabi freaks out that Kate said the trigger word. Kate could see he’s fighting this. In the hall, Stefano calls off the murder “for the moment.” Back upstairs, the women argue about who is going into the tunnels when Chad appears. He thanks them for coming. He needs to talk to Tony and Kristen alone. Anna takes Abigail for lunch and Kristen asks Chad where they’re going. She needs to tell Brady and John where Marlena is. Chad can’t allow that. Kristen fights him and Andre argues that Steve is not Stefano. “For all intents and purposes, he is our father,” Chad says. Kristen won’t let the love of her life slip through her fingers and assumes Anna won’t be ok with him protecting Stefano. Tony agrees. Kristen says Chad could lose Abigail. Chad won’t tell her. If anyone says anything, Marlena will die. They shake hands on their secret and Abby and Anna return, looking suspicious. The family goes off leaving them behind. Back in the secret room, Gabi drains the champagne out so she can use the bottle as a weapon. 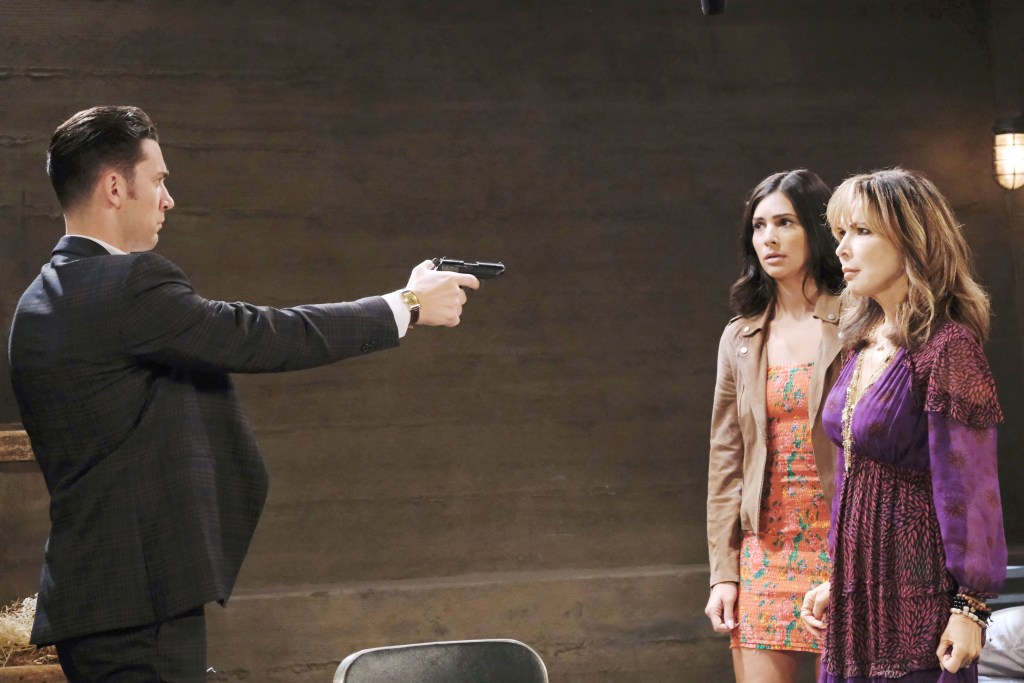 Marlena goes to her room and finds a white wedding gown in her closet. Stefano appears and she’s relieved he stopped the killing. Stefano showed his devotion and it’s time to show hers. He asks her to marry him. She asks if he lost his mind. She’s still married. He ended that. Marlena’s shocked. She needs to agree to leave the past in the past and celebrate their new life together. She realizes the party is a wedding. She doesn’t know if…Stefano talks over her. He’ll make her happy. She says yes, reluctantly but hears John saying not to marry Stefano, once she’s in her gown. Downstairs, Stefano greets his kids. Chad has ensured they weren’t followed. There are hugs all around. He tells them he’s marrying his Queen of the night – Marlena. They look shocked. 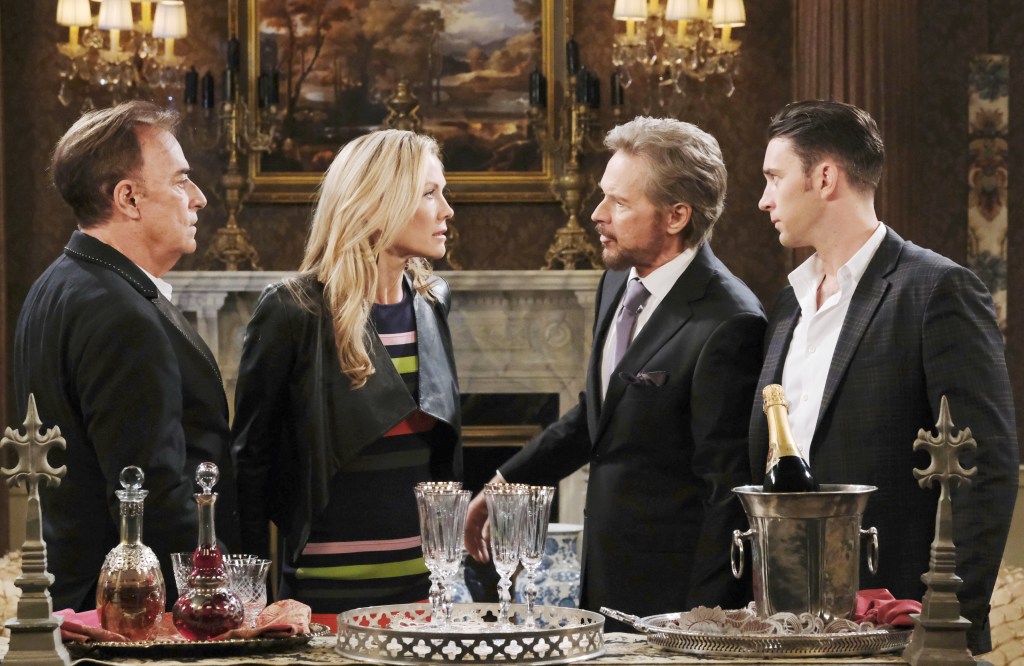 Abigail comes upon something shocking. 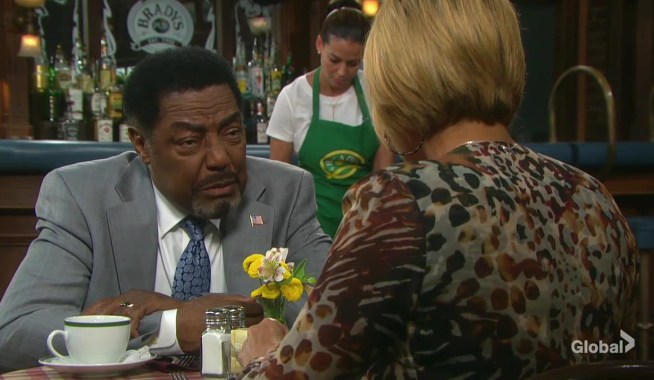 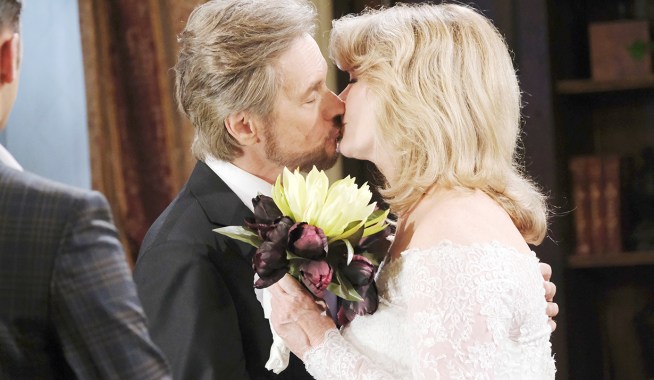