Wednesday March 25, 2020: On Days of our Lives today, Eric and Xander argue, Hattie quits the pub, and Ciara and Ben have shower sex. 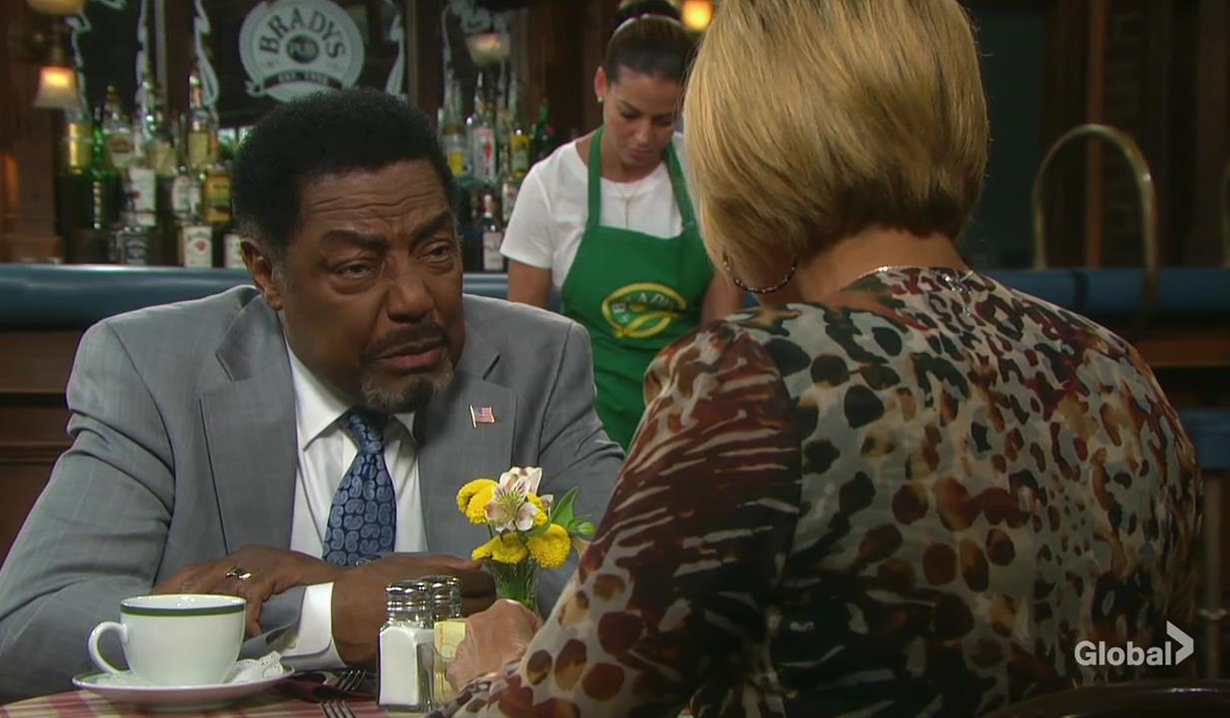 At the pub, Roman’s disturbed that John hasn’t found Marlena yet. Hattie has faith. She asks if they can be a little less Irish at the pub. She finds it dreary. Roman’s stunned. She tells him he’s kissed her twice and she wants to know if “this thing” is going anywhere. Roman has no clue as to what she’s talking about. He goes and she grumbles about him pining over a woman he can’t have. Outside, Nicole reads the test results and realizes Mickey really is Sarah and Eric’s daughter. Abe turns up. Nicole’s in shock and Abe asks what she’s up to. Nicole asks for his secrecy and they head inside. Roman goes to them and they talk about Marlena’s situation briefly. When Roman goes, Nicole tells him everything about her thoughts on Xander switching babies and Mickey being Brady and Kristen’s and the DNA test. She tells him about the doctor Xander was arguing with and how they can never trust test results in Salem. Abe finds it all very “sad.” He wonders why Xander did this. Nicole can only guess. She saw the way he looked at Dr. Raynor. She knows he bribed her though she can’t prove it. He gave her the same menacing look he gives anyone who gets in his way. She knows Xander had the test results changed. Abe asks her to be careful. Nic realizes she needs to get to Raynor. Abe says that’s not how to be careful. Nic thanks him and they hug. At the bar, Hattie demands answers. Roman reminds her they’re at work. It’s not the time nor the place. Hattie realizes how he feels. She’s done with this job and with him. She takes off her apron and throws it at him. She heads to her room and packs. Roman follows her. He asks her to stay.

More: Feeling crusty about some Salemites 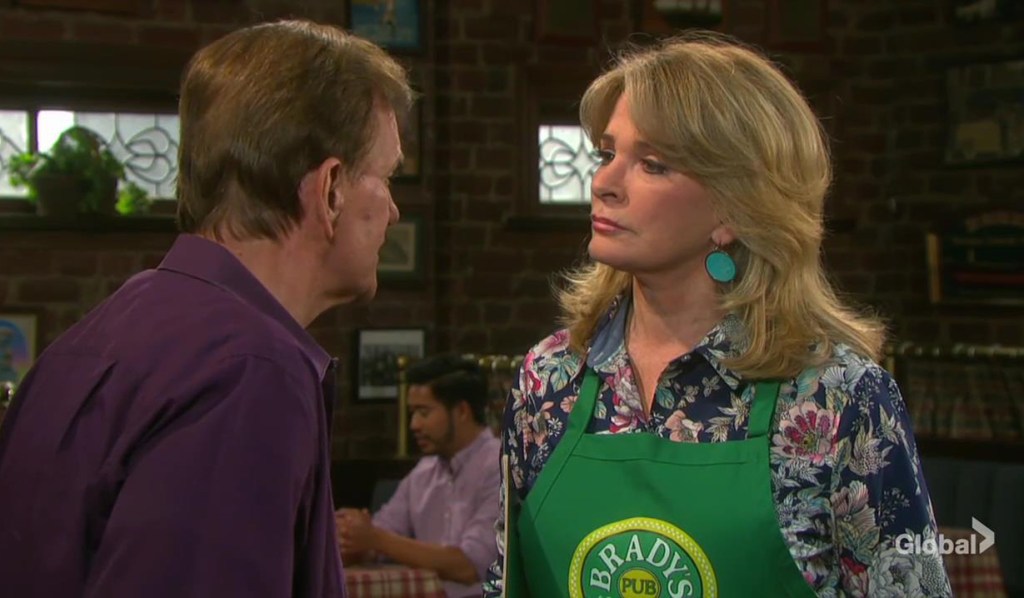 Kristen visits Rachel’s gravesite in the cemetery. Brady pops up. He knew she’d be there. They embrace. Kristen wonders if they’ll ever get through this. Brady’s faith has been tested. He asks if she’d consider trying for another baby. She feels it’d be a betrayal of Rachel. Then Brady asks to set up a charity under her name. Kristen loves the idea. She professes her love. 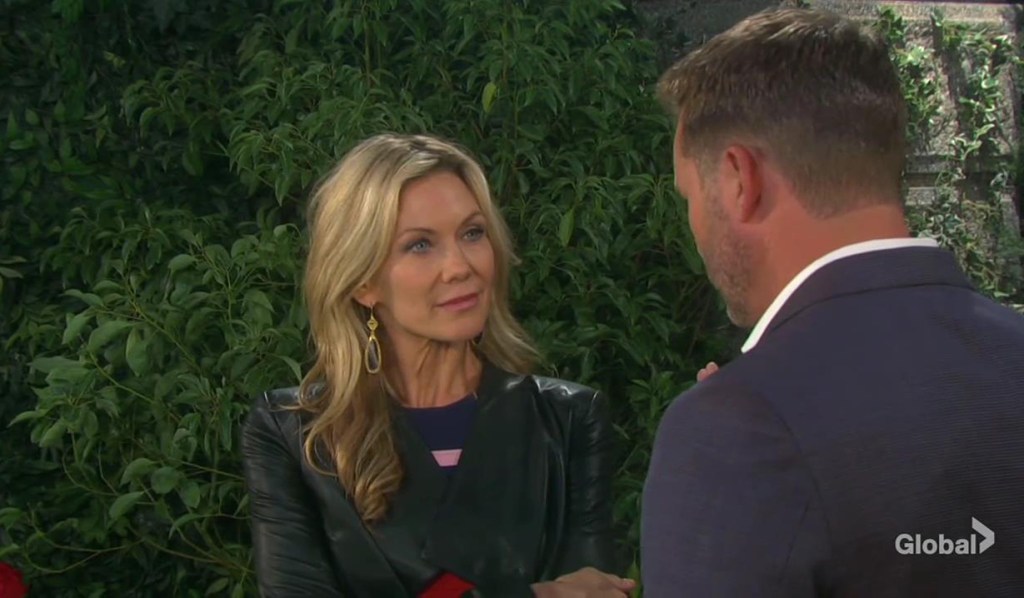 At the hospital, Eric says he heard Sarah and Xander were engaged. When was she planning on telling him? She gripes that it’s happening and doesn’t think it’s a big deal. Eric has a problem with it. They argue. Meanwhile, by the hub, the lab tech receives the pay off to make it look as if Mickey’s not Kristen and Brady’s baby. Xander hopes this means Nicole will back off. When Xander heads into the baby’s room, he overhears Eric trash talk him and reacts. “Tell us how you really feel, padre.” Eric would be happy to and reminds him he’s a blood diamond smuggler and attempted murderer. He’s also not the baby’s father. Xander’s clear on who her father is. The men continue to argue and Sarah starts to cry. This was supposed to be the happiest day of her life. Xander apologizes. Eric keeps up the nastiness and then apologizes. Xander goes and Sarah tells Eric she knows he doesn’t like the man but Xander has done a lot for them. Eric says she can do better than him. Sarah laughs. “Like with Rex?” Eric calls him a good man. Sarah throws his own difficult relationship in his face but Eric blasts her back. He knows Nicole will never lie to him again. By the hub, Xander finds the lab tech dude and threatens him without reason. Later, Sarah and Eric run into Nicole and Brady as they’re leaving. Brady says the baby looks great, then tells them they’re there to donate to the charity wing. Kristen tears up and Sarah takes her aside to comfort her. She calls her brave though Kristen doesn’t see it. Eric and Sarah go. 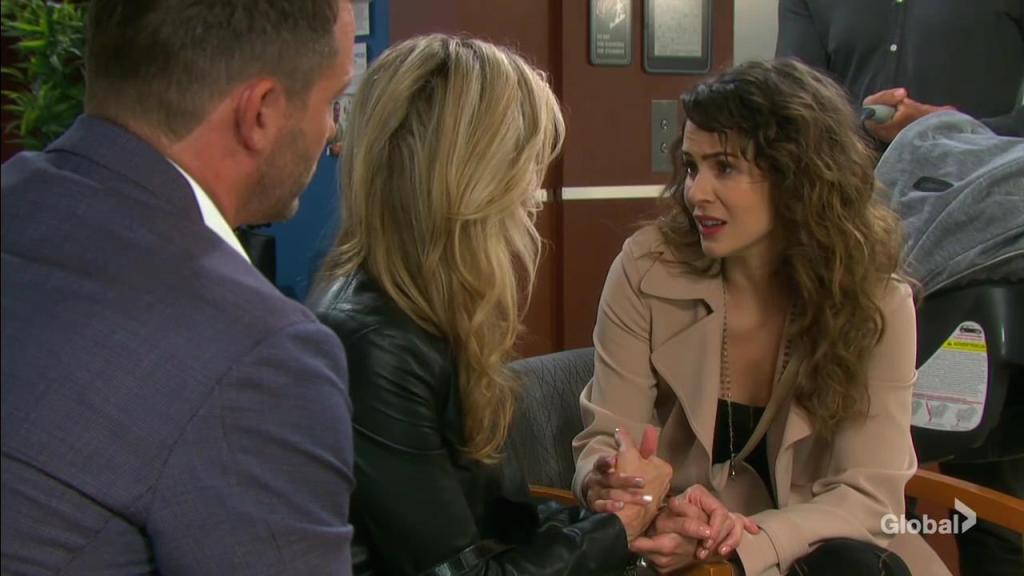 At Salem Inn, Ben goes to shower as Ciara calls out for some items and then joins Ben in the shower. She lathers up half his face and starts to shave him. They kiss. Later, she uses body wash to rub his chest and belly, then grins at him and they kiss some more. Later, they dine on Chinese food in bed. They read fortune cookies and start having sex. 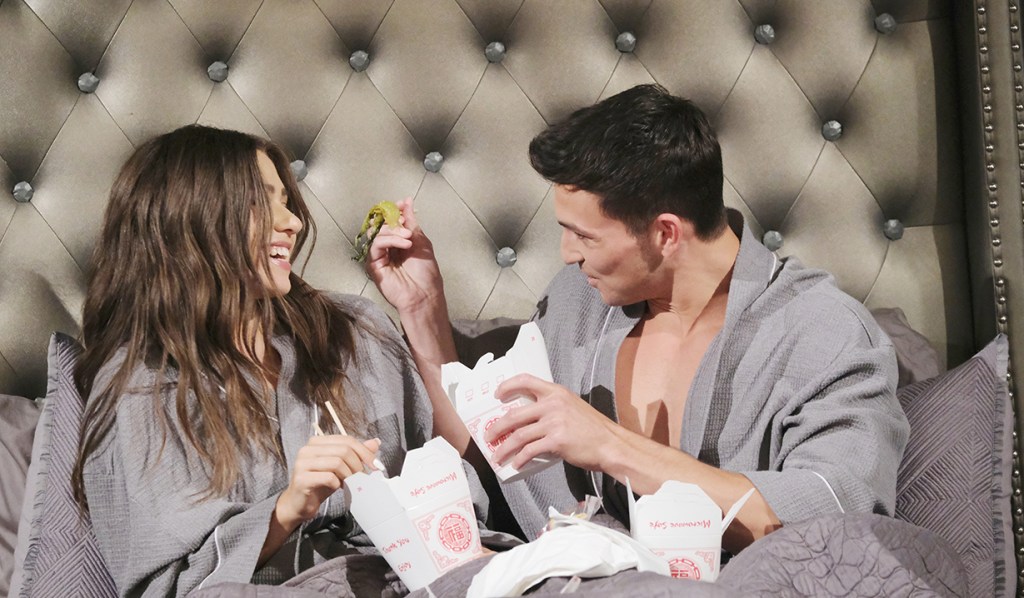 Nicole runs into Xander outside the pub. She tells him she realized he couldn’t have switched babies. He tells her she and Eric are happy. “At least as happy as that dead fish will allow himself to be.” He asks her to leave well enough alone. She agrees. He goes and Nic tells Abe she told Xander what he needed to hear.

One woman is proposed to.

After Xander Pays Off a Lab Tech,...

Stevano Proposes to Marlena and...