Friday March 20, 2020: On Days of our Lives today, Sarah confronts Xander, Stevano rebuilds Maison Blanche, and Hope reels from her reign of terror. 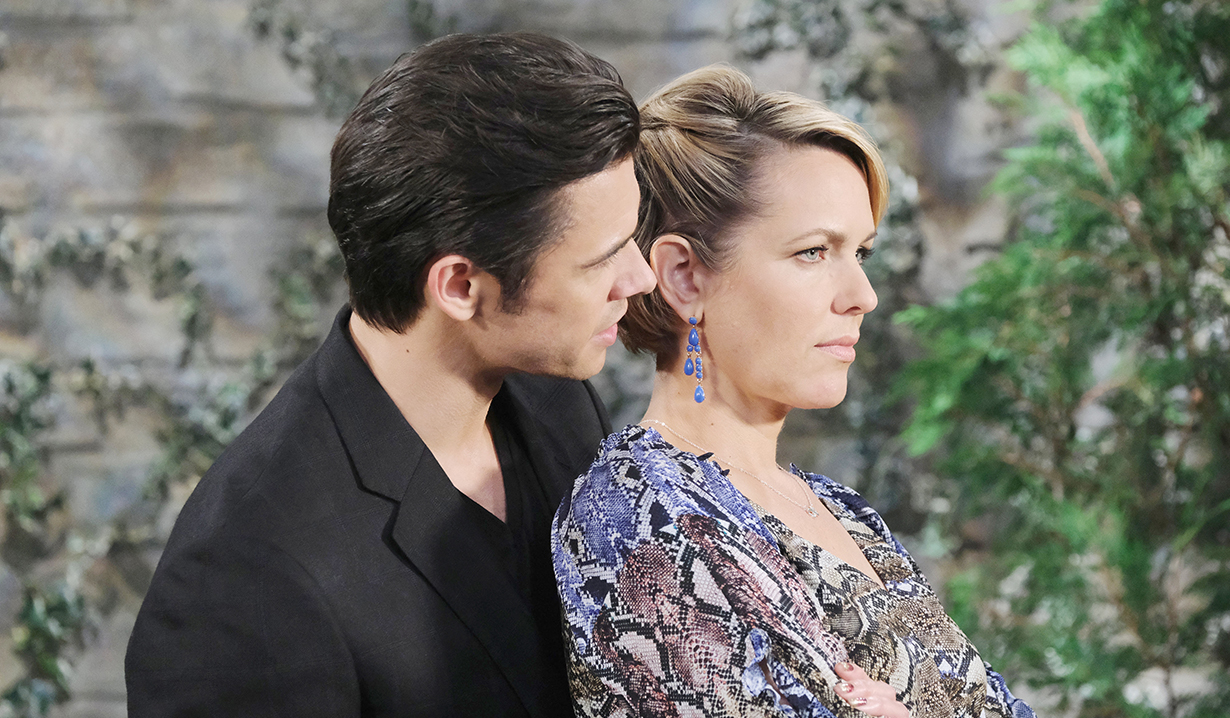 Sarah catches Xander gripping Nicole’s arm at the hospital and questions him. Xander covers. He asked if Nicole would talk to Eric to ensure he won’t cut the baby out of his life. Sarah says he already said he wouldn’t especially now that they’re engaged. Nicole gasps and warns, “You have no idea what you’re getting yourself into.” Sarah thanks her and snarks that she’s been married enough to give advice. She lists the men: “Trent, Lucas, Victor, EJ,” and of course, Xander. Nicole says Xander was her least favorite. Sarah says Xandy’s not the man he used to be. Nicole laughs when he says Sarah changed him. Nic goes and Sarah returns to the baby while Xander follows Nicole. In Hope’s room, Hope’s devastated about her reign of terror. Kayla reminds her she’s a good person. She doesn’t need to feel guilty. Hope tears up and asks why Rolf did it this time. Kay tells her Stefano’s back but it’s complicated. She tells him that Steve got a chip in his head like her and thinks he’s Stefano. Hope’s shocked she brought Steve back to Salem and is sorry. She hears about Marlena being taken hostage and that Gina went after John to drive a wedge between Marlena and John. “Did it work?” she asks. She learns it didn’t but is worried that it’s her fault now that Marlena’s in danger. Kay admits she’s worried Rolf turned Marlena into his queen. 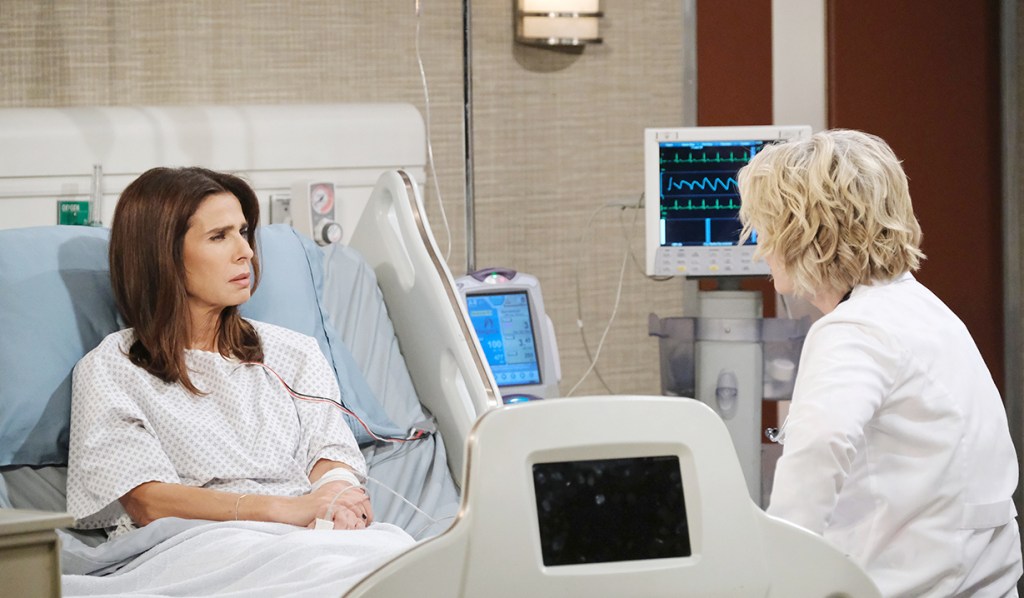 Kate finds Chad at the DiMera Mansion. He was just thinking of her and flashes to his father telling him to finish off her and Gabi. As her back is turned, he tells Kate he has big plans for her. She worries about going to prison and he promises she won’t. Kate looks upset. He sounded like his father just then. She notes he’s wearing the Phoenix ring and hopes he’s not letting his father compromise himself as a father and husband. Chad has trouble speaking and clutches the letter opener behind his back. He turns away and says he hasn’t been sleeping well. He grabs the fleur de lis ornament and hits her over the head. She’s knocked out cold. Gabi appears. She won’t go down without a fight. Chad says it’s good. He just told Kate that she’s not a part of DiMera anymore. He’s about to tell her she’s not either when Kate groans and Gabi gasps. She sees Kate behind the sofa and goes to her while Chad grabs the ornament and bashes her in the head. Gabi falls unconscious. Just then, Abigail arrives. 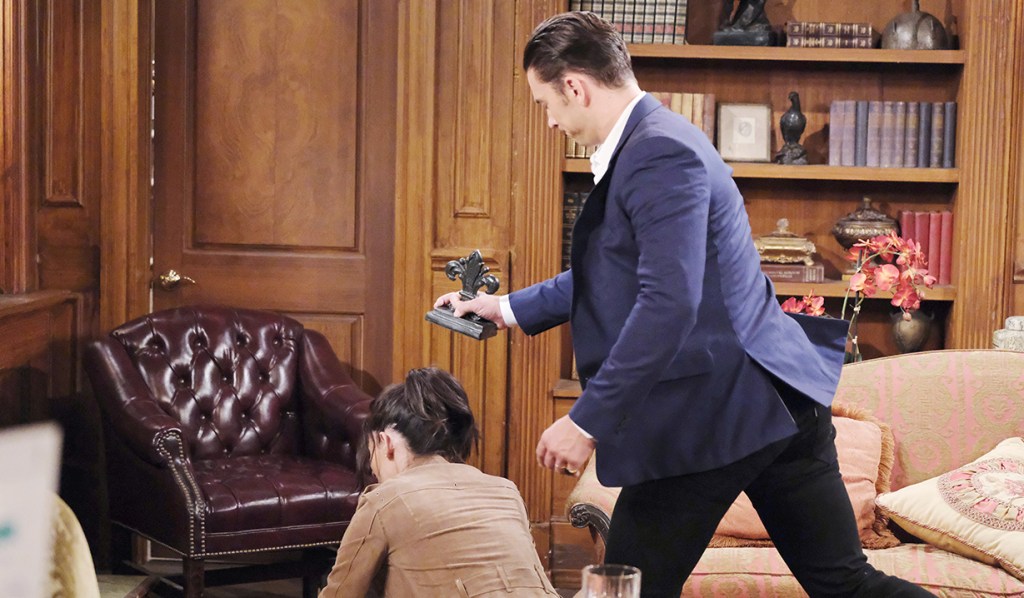 At Stefano’s new lair, he plays chess as Marlena strolls out, disoriented. She admits she dreamed of John. Stevano tells her she belongs with him now. She likes the house. He says he rebuilt Maison Blanche in Salem. This is where they’ll reclaim their love. She nods slightly. He gifts her a Cereus cactus which is also known as the queen of the night. It’s a symbol of his patience and willingness to wait for her to “flower before me.” He almost kisses her but she develops a headache and he massages her. It helps and she’s grateful. He asks her to host a party with his children and she grins and asks if John will be there. He demands she forget about John Black. She looks distraught and he apologizes for yelling. Marlena says she needs to get back to John, then passes out. When she wakes up he says, “My queen.” Marlena replies, “My king.” 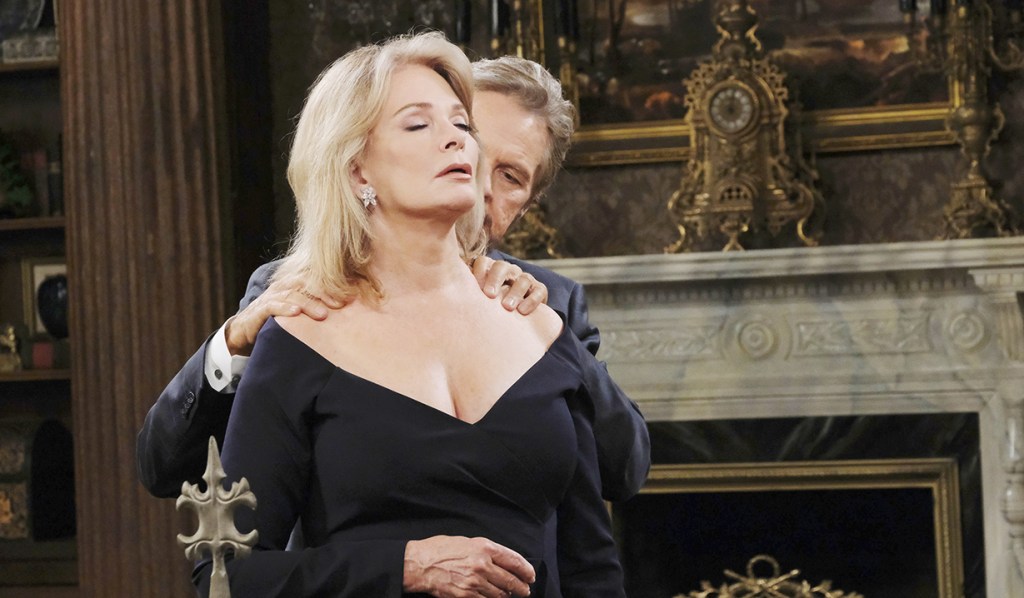 After Brady and Kristen have sex on the conference room table at Basic Black, they agree that the prototype boxer briefs are a go. They kiss and Kristen starts to pull away. Brady knows she’s thinking of Rachel. He tells her that she’d want them to move on.

Xander catches Nicole in the park. She confesses she heard him threatening Dr. Raynor and she saw Mickey’s birthmark. Rachel had one in the same exact place. Xander says it proves nothing but Nicole thinks otherwise. He denies it and warns to drop it. He goes and she ignores his warning. 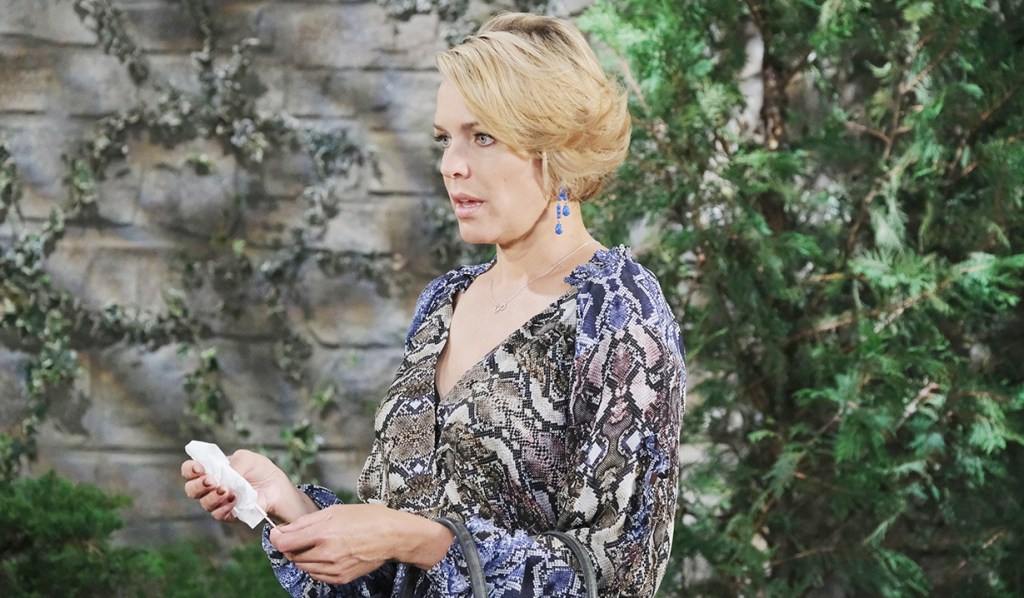 Nicole arrives at Basic Black as Brady leaves the room. Nicole picks a fight with Kristen about asking Eric to hold the baby. Kristen explains she feels connected to her. Nic says she kept her from her daughter. Why would anyone let her near their kids? Kristen knows Eric agrees. Nicole snaps that her baby was taken from her because she doesn’t deserve one. Kristen comes at her and they wrestle a little. Brady returns and comes between them. He takes Kristen away and to herself, Nic says she’s sorry but she needs to know if Kristen really is Mickey’s daughter. She looks at the lock of hair she pulled out of Kristen’s head.

Back in the hospital, Sarah sings to Mickey that she’s engaged. Xander walks in as she says she knows he loves them. He looks upset but covers. She leaves and Xander agrees he does love the two of them. He won’t let Nicole tear them apart.

Sonny wants Evan to do the right thing.

<p>Hope wakes up after surgery to remove the chip. Kayla has to fill her in on what’s been happening lately.</p>

<p> Xander and Sarah visit Mickey in the hospital. Mickey’s on her way to a full recovery.</p>

<p>Brady breaks up a catfight between Kristen and Nicole. Nicole figures it was an easy way to get DNA for the paternity test.</p>

<p>Nicole has Mickey’s DNA and after picking a fight with Kristen, now has her DNA. She’s ready to get a paternity test.</p>

<p>Xander knows Nicole is on to him about Mickey’s paternity. He doesn’t want her talking. </p>

<p>Stevano planning something dastardly while playing chess. He’s glad he has made headway with Marlena.</p>

<p>Marlena has been given a chip in her brain from Dr. Rolf. She’s slowly succumbing to Stevano’s charms.</p>

<p>Stevano has ordered Chad to kill Kate. He hits her with a fleur des lis ornament and she falls to the floor unconcious. </p>

<p>After Kate goes down, Chad prepares to hit Gabi over the head with the fleur de lis ornament. He plans to stick them in the ‘secret room’.</p>

<p>Chad’s surprised by Abigail’s return from helping JJ to settle in to his new place in Africa. Chad struggles to hide the truth of what’s been going on with him from her.</p>