Lani and Eli Bump Into Known Criminal, [Spoiler], and Realize He Has David and Knows Evan

Friday March 13, 2020: On Days of our Lives today, Eli and Lani help find David, Kristen wants to hold Mickey, and Nicole's suspicions about Xander are confirmed - she knows who Mickey really is. 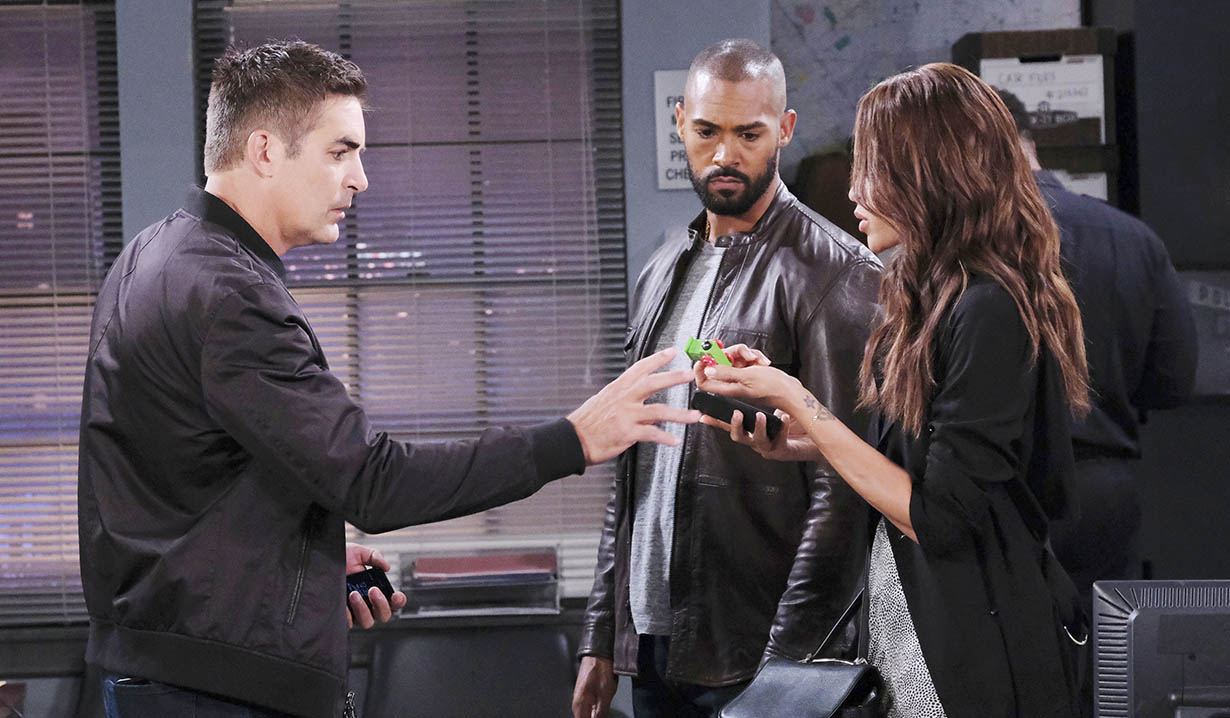 Eli and Lani take a romantic stroll in the square. They talk about the situation with Marlena and Evan and Lani feels bad for David. They embrace and though they’re not on the force anymore, they decide to help Rafe with the situation. As they talk, a disguised Orpheus (played by George DelHoyo), bumps into Eli and walks off. Eli is annoyed and Lani calls after him, saying he dropped something. Orpheus keeps walking, which puzzles her. She picks it up. It’s a toy train. They head to SPD. 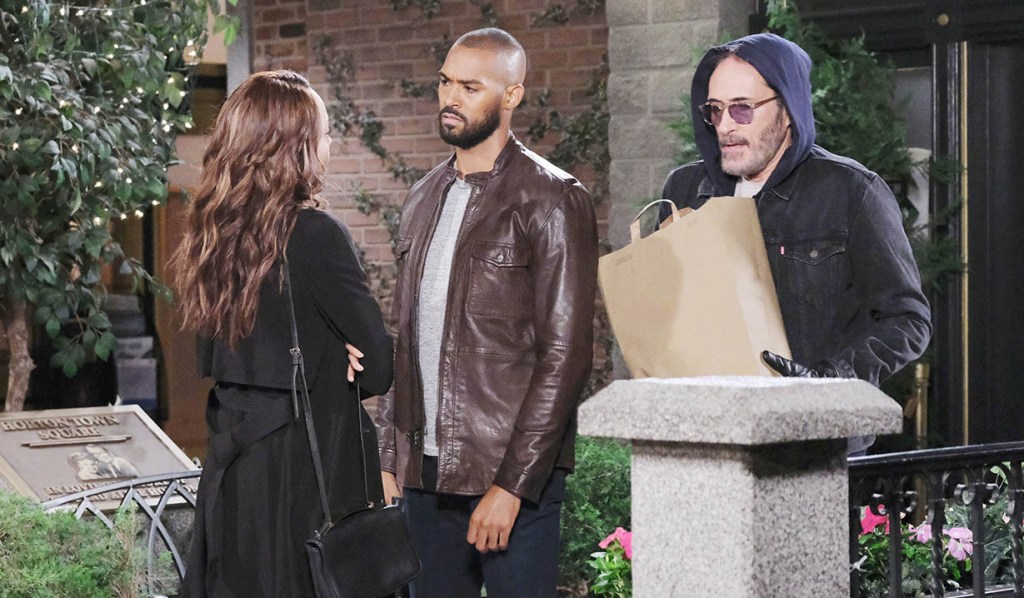 At SPD, Sonny and Will complain about Evan going free. Rafe leaves Evan in his office and tells the guys he asked the judge to let Evan go, in the hopes that he’d lead them to David. Rafe asks after Arianna. Sonny says she’s fine and assures Rafe David will be back for playdates with her soon. Rafe returns to Evan and says he’s free to go but asks him not to leave town. He again asks where David is. If he reveals this, he’d consider telling the courts he’s fine with supervised visits. 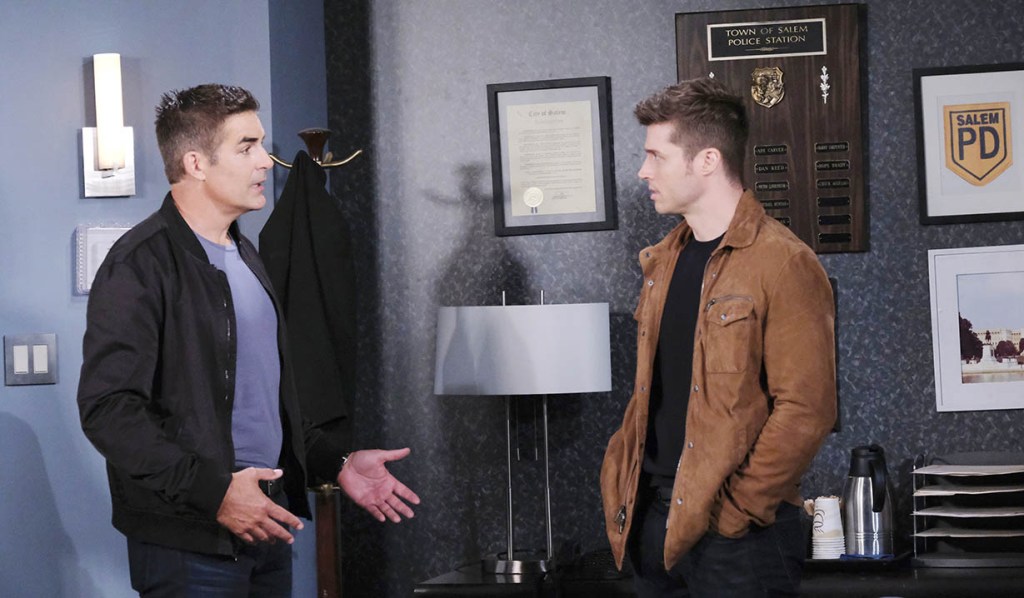 At Basic Black, Nicole says she feels for Kristen since she too lost a baby but she’s never going to forgive her for impersonating her. Brady wonders where Kristen ran off to just as he receives a text from her saying she went to check on the baby. Brady wonders why she’d do that. “Why does that woman do anything?” Nic spouts. Brady doesn’t find that helpful. They head to the hospital.

At the hospital, Xander tells Dr. Raynor to take the money and run. Sarah appears. Sarah can see they look uncomfortable so Xander covers. Sarah goes to take a call from Maggie and Xander wants to know if Raynor’s going to leave town. As long as everything goes fine with Sarah, she’ll leave. Kristen finds Eric in Mackenzie’s room. She apologizes for what she did to Eric and Nicole. She’s not that person anymore and genuinely cares for his daughter. Being a mother to Rachel changed her. Eric’s thankful for her concern and for getting tested to become a match for bone marrow. She asks how the baby is and learns they’re very hopeful since the surgery was a success. Kristen tears up, glad to hear. Eric’s truly sorry for the loss of her daughter. She cries and asks to hold Mickey. Since her immune system is compromised, he can’t allow it. Brady and Nicole turn up. Brady goes to Mickey’s room. He’s glad to hear Mickey will be okay and offers support if Eric needs it. They go. Meanwhile, Nicole eavesdrops on Xander, who calls Victor to tell him the situation is handled and Raynor’s leaving town. Their secret is safe. Nicole approaches Xander and confronts him. He lies that the call was about Titan business. Nicole doubts that. Sarah appears and Nic leaves. Xandy asks her to take a break outside the hospital. She reluctantly agrees. All he wants is to make her happy. Later, Nic goes to Eric who kisses her passionately. They gaze at the baby and Nicole gets a funny look on her face when Eric says he doesn’t know what he’d do if he lost Mickey. Nicole notices the birthmark on Mickey’s neck and flashes to Brady telling her that Kristen remembered Rachel had the same one and looks stunned. 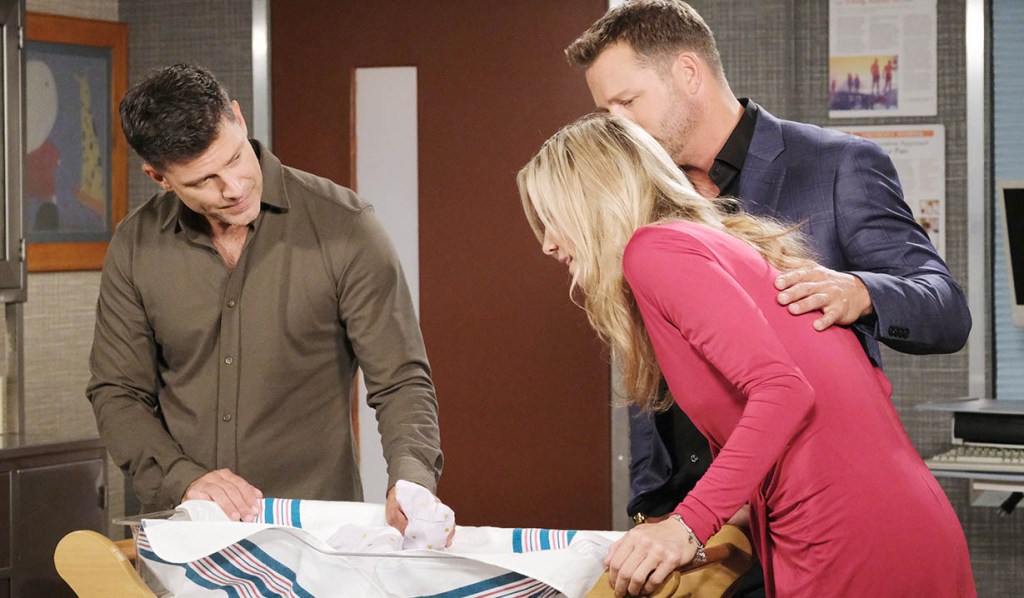 Will and Sonny return home and Sonny beats himself up for taking up with the likes of Evan. Will says to stop blaming himself. He asks him to pour some wine while he checks on their daughter. He returns after reading a story three times to Ari about two kings which relates to them. The men sip wine and head to bed. Will thanks Sonny for his patience and kindness. They profess their love and kiss on the bed. They make love. Later, Sonny is dressed and gets back in bed. Will asks where he went. He got their wedding bands. They’ve missed wearing them and put them on. Sarah and Xander arrive downstairs. They kiss and Sarah goes to shower, while Xander sighs in relief that everything will be fine and Sarah will never know Mickey’s really Kristen’s daughter. 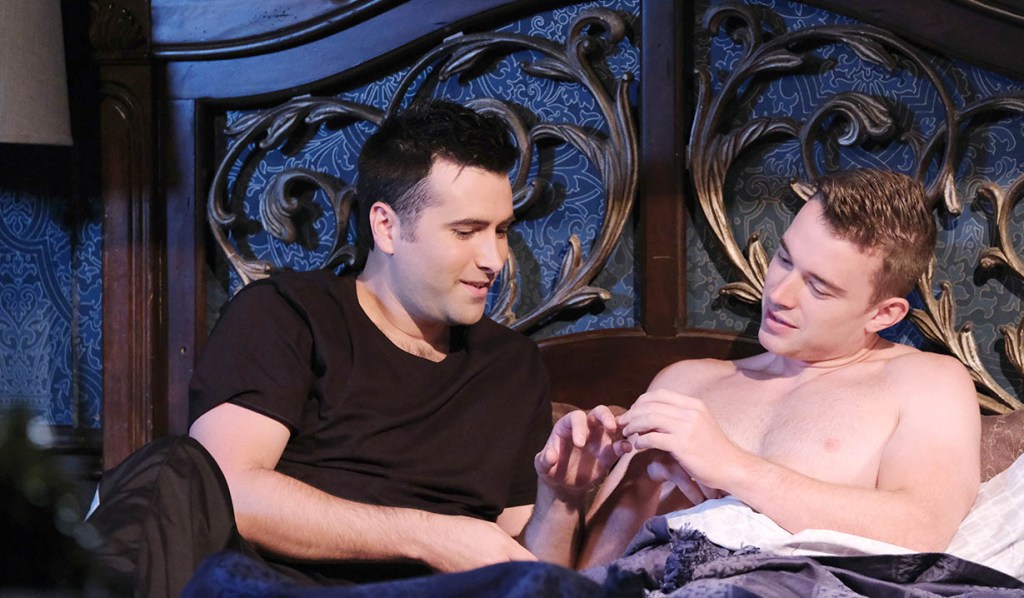 Back at SPD, Rafe sends someone to follow Evan. Eli and Lani appear. He’s sorry for everything Gabi put them through. If he had have known… Lani stops him. They know. They want to help him find David. Rafe says he requested Evan’s bail to be set low so he would get out and tells them Evan’s being tracked. Moments later, Rafe gets a call. The cops lost Evan. Rafe puts out an APB on Evan and assumes he knew he had a tail. Lani digs in her purse for her cell to call Abe and pulls out the train. Rafe gasps. That’s David’s.

Evan knocks on a door at Salem Inn. Orpheus answers and Evan asks, “Where’s my son?” He goes to David and talks to Orpheus about losing the cops. Orpheus says he learned from the best. In another room, Kristen admits she’s not sure why she went to see Mickey. She talks about the connection between the kids. 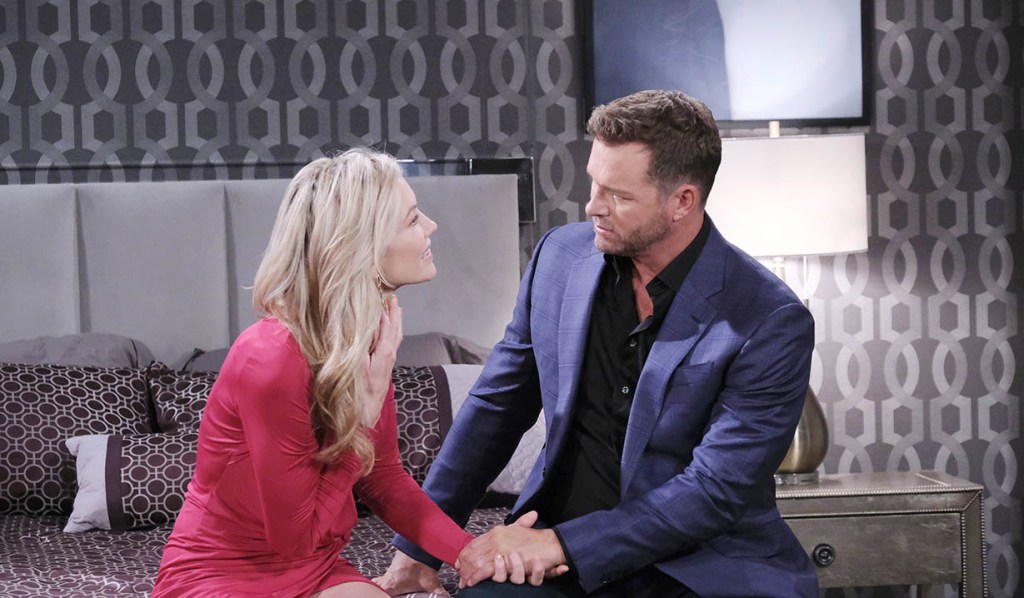 Nicole reels as she considers who Mackenzie really is. 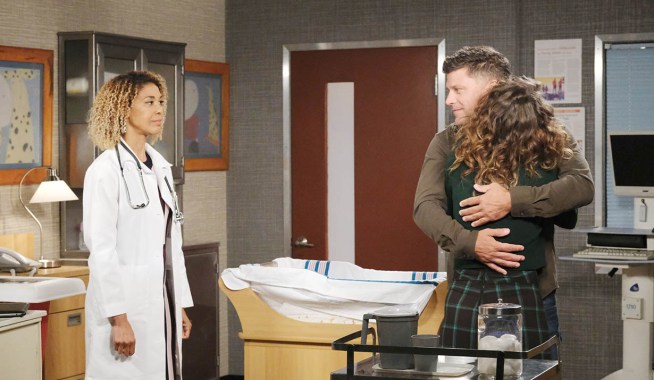 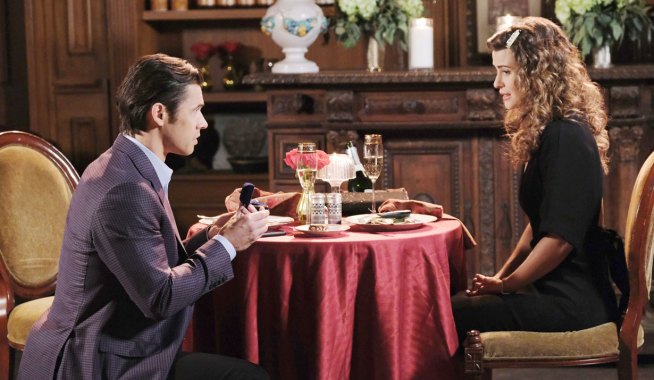