Thursday March 5, 2020: On Days of our Lives today, Jenn flies off the handle at Kate and Gina, Marlena doesn't want Hattie to be bait for Stefano, and Chad learns Abigail's still in Africa. 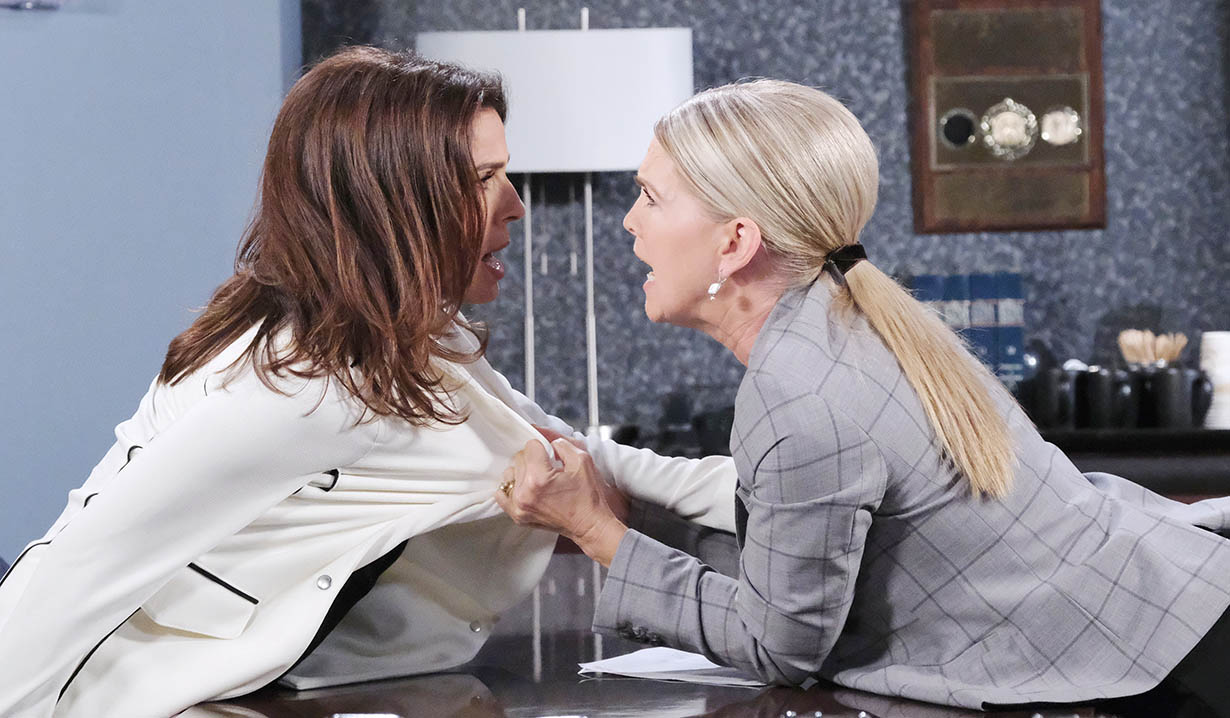 Princess Gina is annoyed by Shawn at SPD. He wants his mother back. She gloats that Hope’s gone. Shawn tells “her highness” she has to submit to an MRI. She refuses to submit to that or anything in this country and again reminds him she’s Princess Gina. She’ll only submit to John. Shawn says she has no choice. Hopefully, it will show them “how Rolf turned my mother into a homicidal windup doll.” They’ll undo his work. Outside, Kate complains to her lawyer on a call about taking his time bailing her out. She bumps into Jennifer who confronts her about not coming clean about Stefano returning and knowing Gina threw her off the balcony. Kate denies knowing all of it and is sorry but says she did the right thing by saving John from Gina. Jenn tells her that Stefano has taken Kayla hostage. Who knows if he’ll let her go? Kate says not to worry. Steve is more like Stefano lite. She’s sure Kayla’s love will break the hold Stefano has over Steve. Jennifer tells Kate that Bill passed away. Kate’s shocked and asks when the funeral is. Jenn says she missed it when she was locked up. Kate’s sorry. She runs off crying. Shawn appears and hugs Jenn. Jenn visits Gina who has been expecting her. Gina claims Jenn going off the balcony was a “terrible accident” and claims it wasn’t personal. She had to protect her interests. Jennifer barks that she was in a coma for a year. Gina laments it was hard to pretend to be her loving, supportive cousin. Gina finds pleasure in teasing that she almost offed Abigail for being nosy. This sets Jenn off and she grabs Gina by the lapels and shakes her. Shawn rushes in and takes Jenn into the other room. Jennifer explains what happened. Later, Gina growls about instructing her lawyer to press charges as Shawn takes her to the hospital. 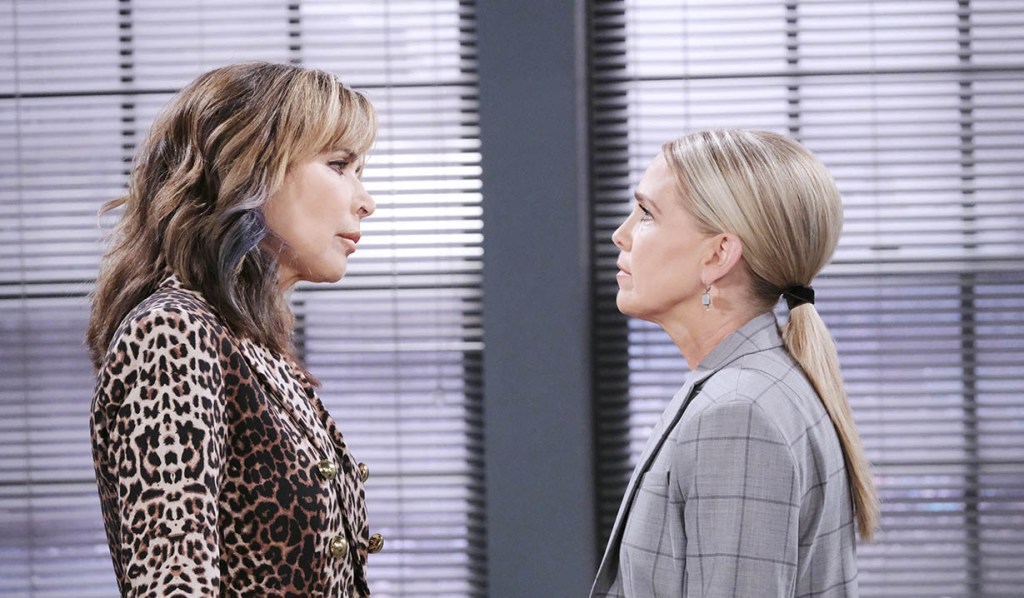 At the DiMera manse, Chad stares at his father’s pinky ring and his portrait and reads the letter from Stefano telling him he’ll be by his side as he regains his empire. Chad takes some pills for a headache as Jack wanders in. He just came from the airport and says Abigail didn’t return with him. JJ decided to stay and so Abigail thought she’d stay and help him get settled for a while. “She didn’t tell you?” Chad says Charlotte likes hiding his cell phones and yesterday threw it in the dishwasher. His new one is charging. Jack heard that Stefano was inhabiting Steve’s body. Does Chad know where Stefano could have taken Kayla? Chad doesn’t know but says he was there today and left his pinky ring. Jack wonders why he’d risk getting caught to leave it. Chad says it’s a big deal and explains the letter – off the record. Jack warns Chad to keep his distance from Stefano. He knows the man has some pull with him. Chad will think about this. They embrace and Jack says he and Jenn will help him take care of the kids until Abby returns. Jack goes and Chad continues to read the letter where Stefano calls the most important thing in life la famiglia (the family). He hears Stevano’s voice tell him to put the ring on and does so. 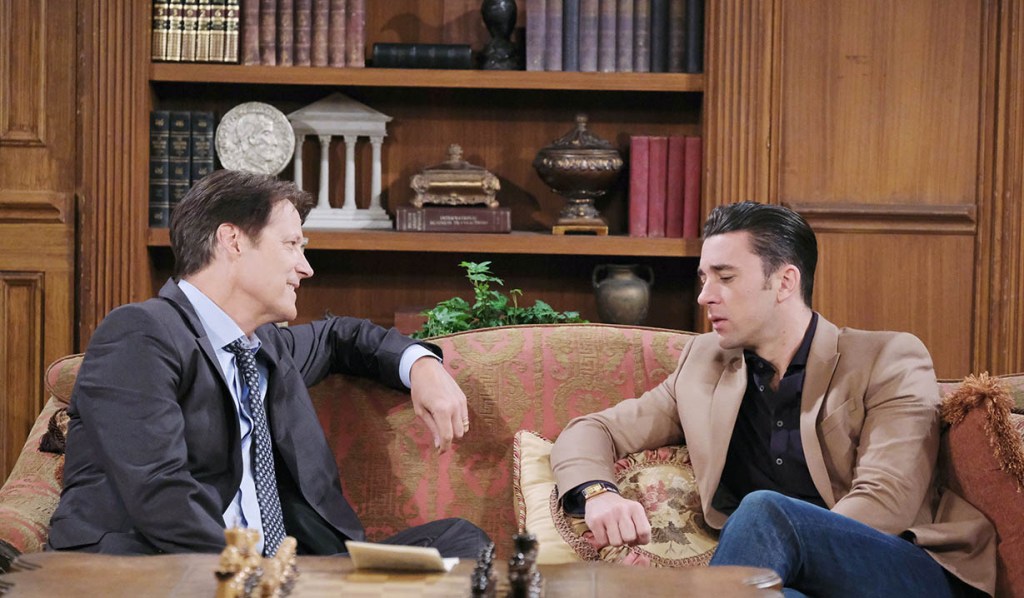 In the warehouse, Kayla tries talking to Steve, telling him he’s the love of her life but Stefano says not to call him that name. He finds her irritating and wonders why Justin doesn’t feel the same. Kayla insults him back, telling him Marlena can’t stand him. They go back and forth and he tells her to can it before he’s forced to kill her before it’s time. Kay’s shocked. Stefano gets on a call with Rolf and talks about wanting Marlena to be comfortable.

More: Best lines of Days of our Lives

At the pub, Hattie agrees to Justin and John’s plan to fake Stefano out so he thinks she’s Marlena. Roman doesn’t like using her as bait again. “He’s not gonna be stupid twice,” Pard says. Marlena arrives and having heard their plan prefers to act as bait. She fills them in on Ben’s execution and how he’s free but in the hospital recovering. “That’s one hell of a story,” Hattie quips, happily. Marlena goes with John and Justin to meet Stefano. Kate turns up and Roman gives her hell about keeping the secret that Steve turned into Stefano to herself. Does she have any idea of how much pain she’s caused? She does. Roman fires her, causing Hattie to gasp, “Roman. You can’t do that to her.” Roman barks that this is between him and Kate. Kate shrugs. The lure of the simple life is over for her anyway. Kate packs and goes and Hattie worries about her BFF.

John, Marlena, and Justin arrive at the meeting place and John hides as the others go to Stevano and Kayla. “There she is. My queen,” says Stefano. Justin transfers the money into his account. Stefano asks if she came of her own free will. She says Justin didn’t drag her there. Is she finally willing to submit to him? Marlena is only there because of all the people she loves that he hurt. She’ll go away with him, knowing he’ll never hurt them again. Kayla says not to do it. He’s going to put a chip in her brain to make her submissive. The men make the exchange as John is knocked out in another area of the warehouse.

Jack arrives at SPD. Jenn updates him on Gina bragging about wanting to kill Abigail.

Ciara Forces a Confession From Evan...

As Stefano’s Pawn, Chad Tries to...