Ciara Storms the Prison With a Gun to Evan’s Head, Yelling to Stop the Execution

Tuesday March 3, 2020: On Days of our Lives today, Brady and Kristen have a strange encounter with Dr. Raynor, Gabi donates bone marrow, and Will tackles Evan for the gun. 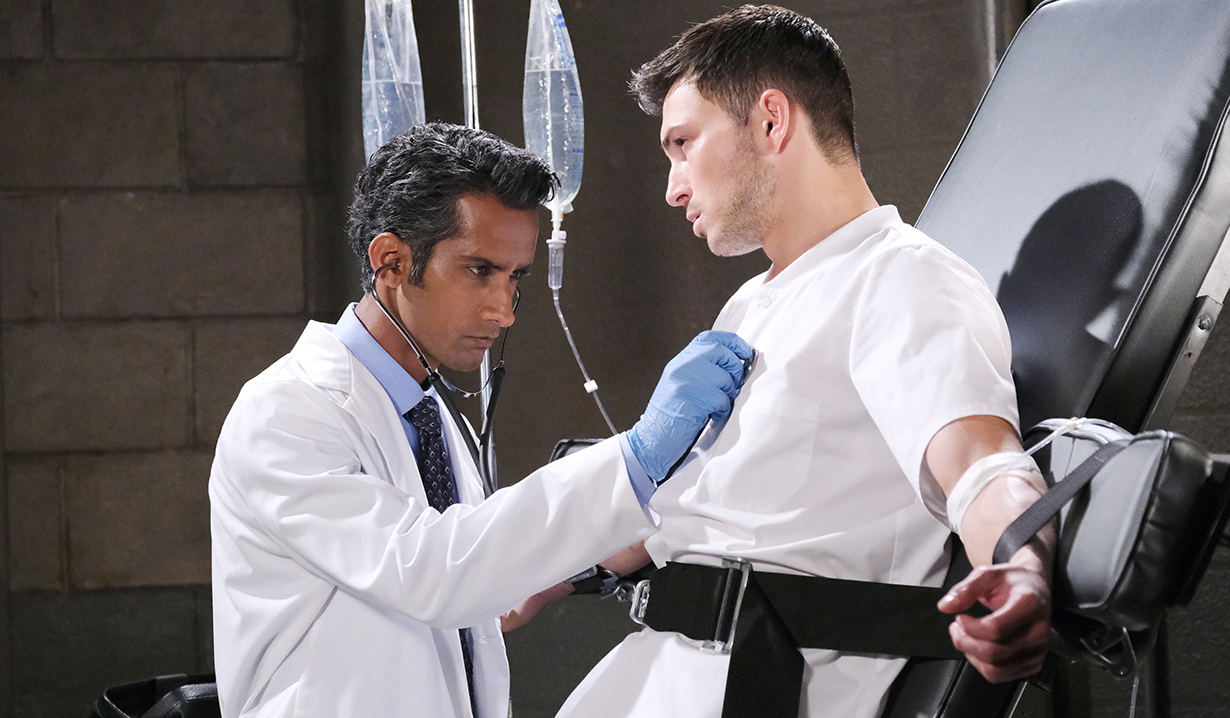 At the square, Kristen asks if Brady’s still mad she lied that Stefano was walking around looking like Steve Johnson. He doesn’t want to throw away what they have and asks for “no more lies.” They hold hands and move on. They bump into Dr. Raynor, who looks at them with guilt in her eyes. Kristen thanks her for the kind card she sent after their daughter died. Raynor flashes to Xander telling her not to breathe a word that he switched Sarah’s dead baby with Kristen and Brady’s live baby. Brady says they don’t blame her for their daughter’s death. He thanks her and she flashes to Xander paying her off and telling her to go to the Dominican Republic. Raynor had doubts she could do it but Xander threatened her if she didn’t. Raynor snips that she’s glad but is late for work. She goes, leaving Kristen to have the same feeling that something isn’t right. Brady hugs her. They agree to go to the hospital to provide moral support for Eric and Mickey.

At the hospital, Sarah, Xander, Eric, and Nicole gather to wait for Mickey’s bone marrow transplant. They’re concerned that Gabi’s not here yet. What if she bails? Gabi strolls in smiling. She got stuck in traffic but she’s ready to save Mackenzie’s life. Nicole asks her not to pretend she’s doing this out of the kindness of her heart, “Because you don’t have one.” Gabi knows. It was ripped out when she gave Stefan Julie’s heart. Still, she wants to get the show on the road so Sarah takes her to be prepped as Eric goes for coffee. Nicole thought for sure that Theresa or Tate was the donor from how he and Victor were acting, demanding that they get tested. In her room, Gabi rants about there being no television, and about possible complications. Sarah says the complications are low. Gabi worries about the pain from surgery and Sarah snipes about Julie being in pain because of her murder pacemaker. Eric appears with coffee. Gabi admits she does want to help Mackenzie, not just because she’s getting something out of it because she’s a mom. Sarah and Eric admit they are grateful to her. They talk about being stressed and Gabi gets it. She heard about Maggie. She gripes that her daughter’s father has been locked up months for a crime he didn’t commit, one that Maggie committed – drunk. “But I’m the pariah?” Dr. Raynor arrives and looks away when Sarah says she’s glad that she’s going to be doing the extraction. She and Eric go and Gabi looks uneasily at the needle. Later, Brady and Kristen appear in Gabi’s room. They thought Eric was there. Gabi says they got what they wanted and left. She’s in pain. Kristen says, “Good.” She calls Gabi out on milking this. She deserves to suffer a little. “You’re not a martyr.” Gabi laughs, knowing who she’s talking to. In the waiting room, Eric and Sarah walk in on Xander and Nicole arguing. Nic goes to get food and Sarah and Eric take off to sign some hospital forms while Xander prays to God to let Mickey live. He sees Dr. Raynor and blasts her for returning to Salem. Raynor’s part of the team to save Mickey’s life. She took his money against her better judgment. She ran into Mickey’s biological parents earlier who called her a hero. She says she doesn’t think she can live with this secret just as Nicole returns. Elsewhere, Sarah cries in relief, hopeful that Mickey will be fine. 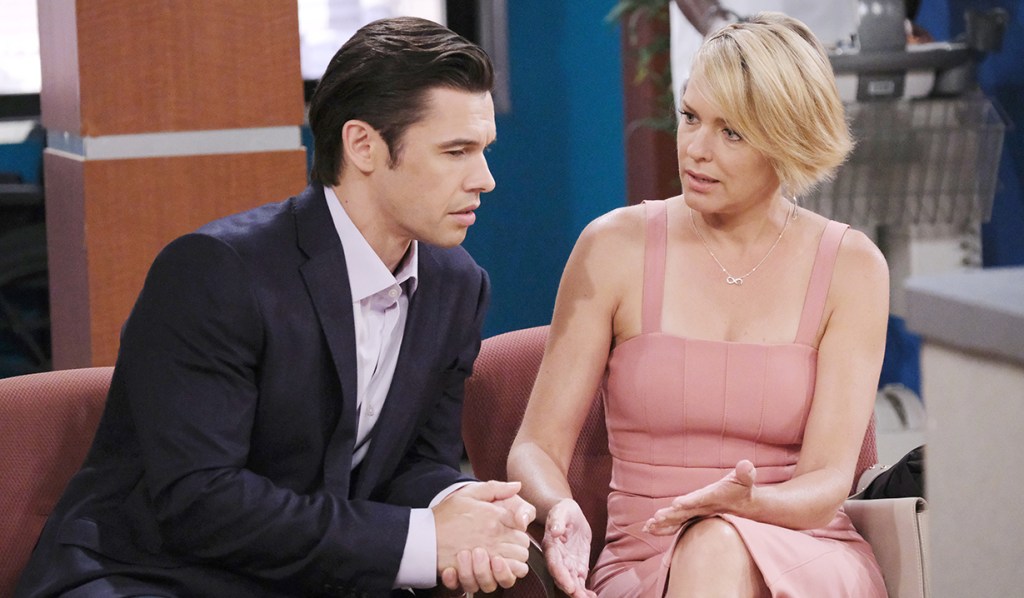 At the Kiriakis mansion, Ciara tells Sonny that Evan killed Jordan. The DNA evidence proves it. Evan exclaims that Jordan was crazy. They all knew that. He was trying to protect David. Evan pulls his gun again. He’s trying to start a new life but needs money to do that. Sonny will get him some from the safe. Ciara says no, if he does that, Ben’s a dead man. Ciara and Will beg Evan to turn himself in. They ask where David is and Evan assures them he’s safe. He starts to rave like a lunatic that everything is ruined and Will goes at him. The gun goes off and the bullet lands in the wall. Ciara grabs the gun and says they’re wasting time. She forces Evan to drive to Statesville while Sonny and Will wait for the cops. 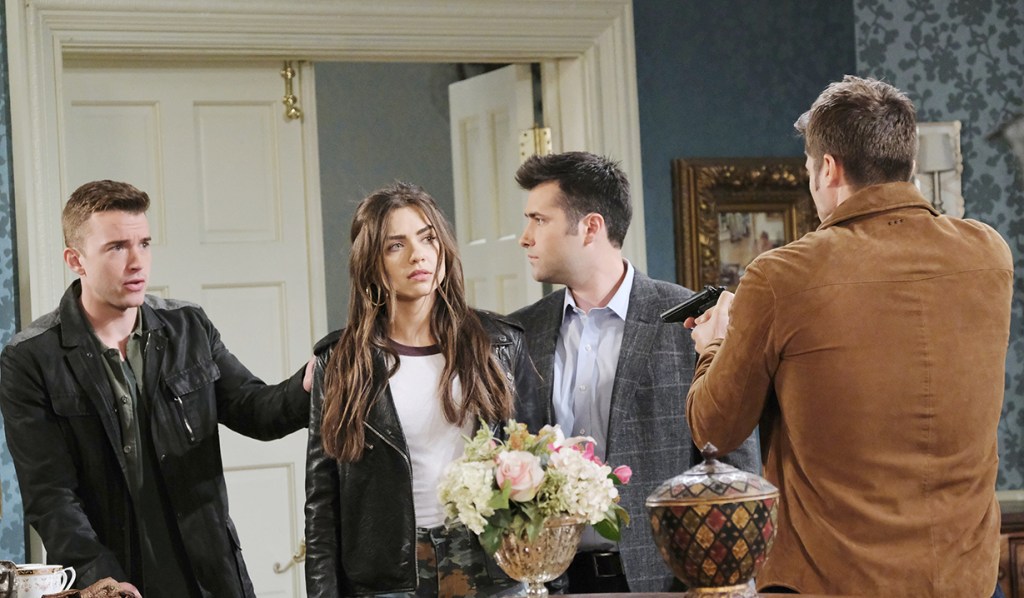 More: Sonny laying the smackdown a highlight on Days

At Statesville, the warden states that the governor has decided not to grant clemency. Marlena gaps that they’re about to kill an innocent man. She tells Ben she’s sorry. Ben receives the first injection which calms him. He hallucinates that Ciara’s begging him not to leave. Warden Floyd shoots down Marlena’s pleas to wait until tomorrow. Ben flashes to first meeting Ciara after her motorcycle accident and to other better times with Ciara as Marlena tells Ben to hold on since he has so much to live for. The paralytic is administered and the doctor tells Ben the third drug administered will immediately stop his heart. Ben finds it hard to breathe and begins to cry as he flashes back to making love with Ciara. Suddenly, an alarm rings and Ciara races in with a gun at Evan’s head and guards trailing her. She yells to stop the execution. 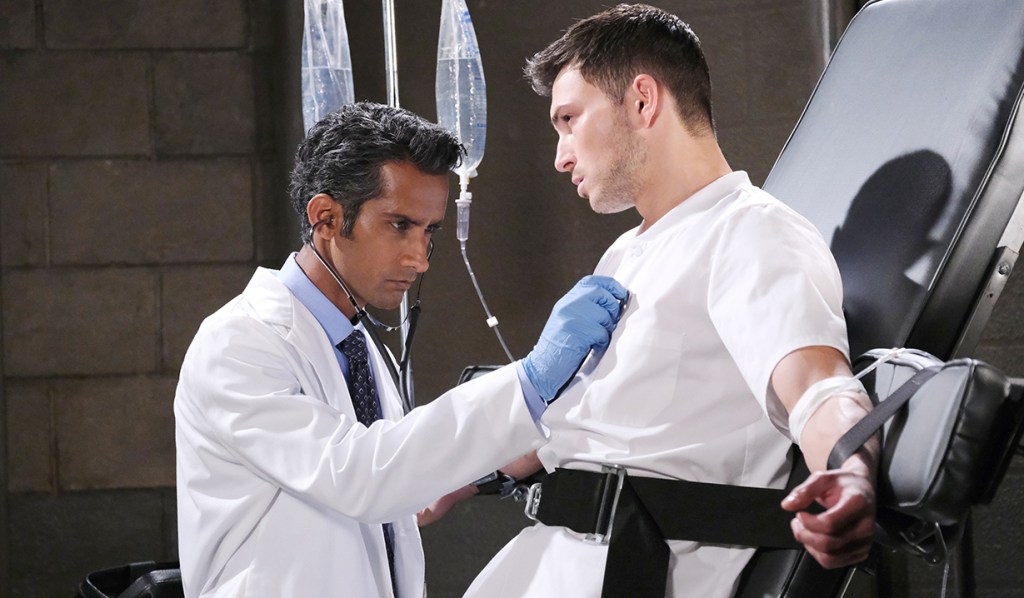 Nicole suspects Xander has a secret with Dr. Raynor.

The Governor Refuses a Stay of...

Ciara Forces a Confession From Evan...