The Governor Refuses a Stay of Execution, Even Though Mayor Carver Made an Impassioned Plea

Monday March 2, 2020: On Days of our Lives today, Justin is fraught with worry over Kayla and Marlena, Will and Marlena are shocked with Ciara's news about David's father, and Hattie wants to know where she stands with Roman. 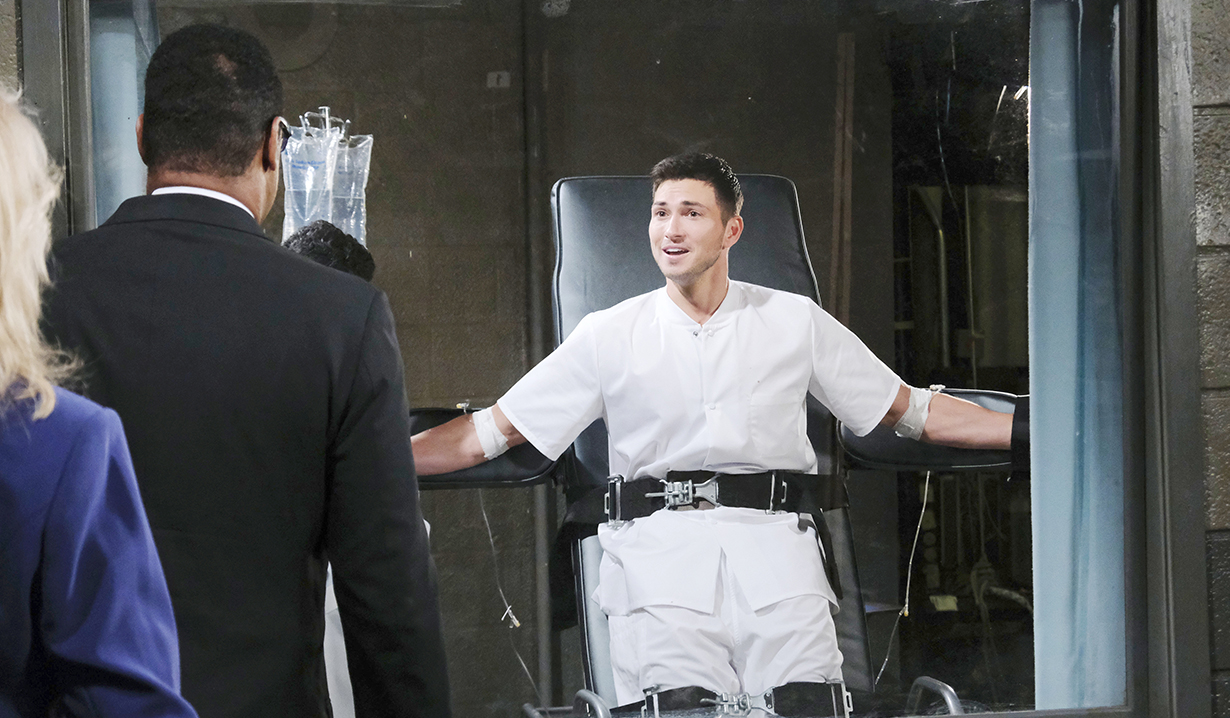 Stefano stops Kayla from leaving the warehouse. He hopes Justin complies with his terms so he can finally be rid of her. Dr. Rolf returns and apologizes that Kayla set herself free. Stefano and Kayla exchange barbs. Kay asks why he hasn’t let her go. He got what he wanted. Stefano assures he hasn’t gotten Marlena yet. Kayla says Justin will never sacrifice Marlena for her. Stefano begs to differ. They go back and forth. Kay says the only way he’ll get Marlena is to transplant her personality into someone else. Rolf thinks that’s a good idea.

From the pub, Roman yells at someone on a call to find his sister. He disconnects and Hattie assures him that Stefano won’t hurt Kayla. Roman’s not convinced but Hattie reminds “Roman that Steve or Stefano or whatever he’s calling himself,” couldn’t even kill her. Roman thanks her for being in his corner. He kisses her cheek, leaving her wide-eyed in surprise. She giggles. He’s sorry his kiss made her uncomfortable. Hattie is reminded of the last time he kissed her on the cheek. She wonders if it means anything. He asks if it has to. Hattie explains that she thinks about their first kiss all the time because she has feelings for him. 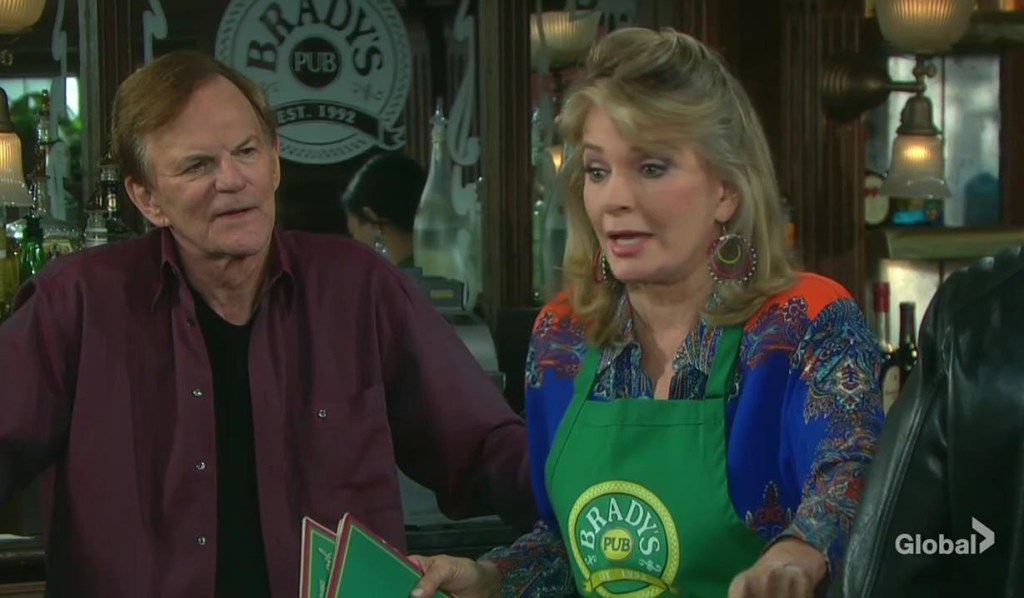 At the hospital, Justin says he’d be at Statesville for Ben’s execution but Steve has Kayla. Justin gives all of the details of what transpired between him giving Stefano millions and wanting to trade Kayla for Marlena. John can see Justin’s worried and tries to ease his concerns.

At the Kiriakis house, Evan pulls a gun on Sonny after he gently dumps him for Will. Evan apologizes. He’s in trouble and needs his help. He explains that the background check on him dug up his real name which would reveal he’s David’s father. Sonny’s stunned. “You slept with Jordan?” He assumed his last relationship was with a man. Evan fell for her, knowing she wasn’t the most stable person. It wasn’t until the end that he realized “how truly psycho she was.” He learned he was the kid’s father when Jordan posted photos on her social media. But he has a criminal record and wants to leave Salem with his son. He needs money for a fresh start and wants to be a family with Sonny and Ari. Sonny asks where David is. Evan looks panicked. 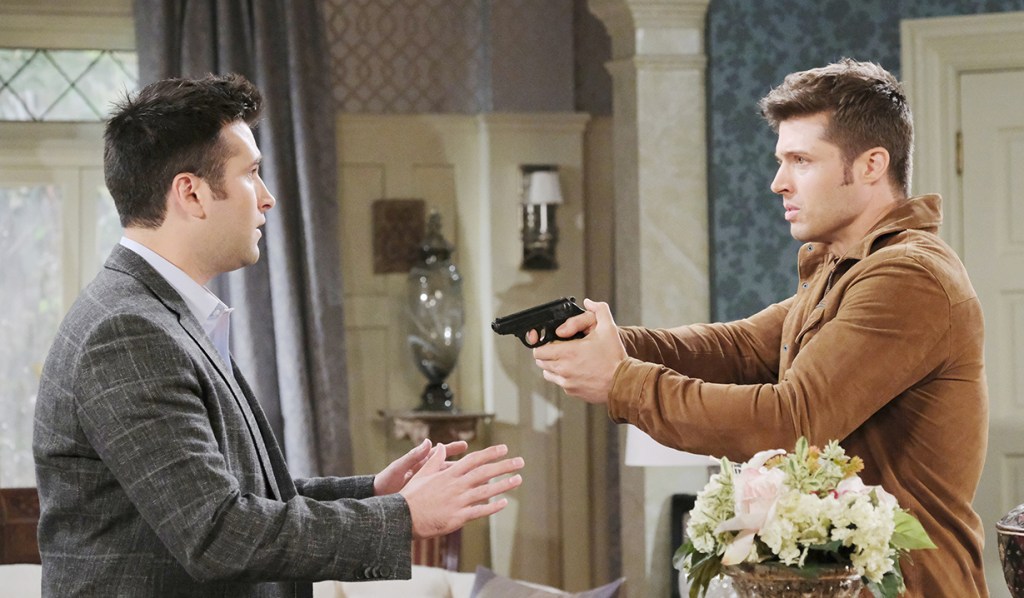 From Rafe’s, Ciara calls Statesville, asking for a stay of execution. The person on the other side of the line doesn’t believe her, she runs off, hoping it’s not too later.

At Statesville, the prison doctor, (played by Karthik Srinivasan), prepares drugs that will be used in Ben’s execution. Warden Floyd greets Marlena. She’s surprised Justin didn’t show. Meanwhile, Ben is led into a room with a window into the viewing room. Will arrives and they press a button that allows them to tell Ben to stay strong – that they’re there for him. Ben looks glassy-eyed and in shock. Marlena hugs Will, glad he’s free. She’s happy he’s there for Ben. Will says Ben made prison almost bearable. Ben is strapped to a bed, arms spread. He breathes uneasily. The table is lifted to a standing position and Ben can barely breathe. Ciara rushes in and begs the warden to stop this. She tells them about the DNA evidence of the real killer. She can prove it. Marlena asks the warden to hear her out so Ciara tells the whole story about the DNA belonging to Christian Maddox, who is Evan Frears. Will jumps up, shocked. He saw Evan with Sonny just now. He calls him but there is no answer. Marlena asks them to go find out what’s going on and she’ll stay with Ben. Ciara tells him she’ll get Ben free. They run. Marlena calls Abe who knows the governor. Abe is contacting the governor. The warden doesn’t care and asks the doctor if the prisoner is ready. The doctor says the needles have been inserted and tells Ben what to expect. Ben begs the warden to wait. The governor calls and Marlena gives Ben more hope but the warden has decided not to stay the execution even though Mayor Carver made an impassioned call. Ben yells, “Oh no,” and Marlena tears up, sorry. 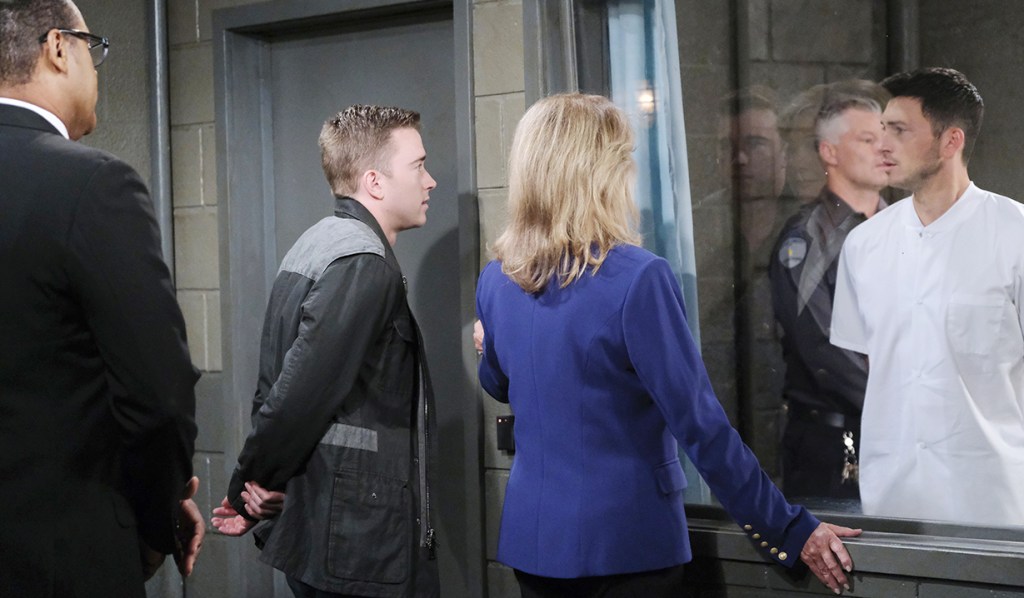 John and Justin rush into the pub. They need Hattie’s help. She’s upset that they interrupted her private conversation with Roman. The men tell Hattie and Roman all about Stefano’s machinations. They want Hattie to pretend to be Marlena again. Hattie agrees to it but Roman’s worried. It doesn’t feel right. Stefano calls. Justin says he spoke with Marlena. Stefano will release Kayla if Marlena agrees to go away with him. Hattie pretends to be Marlena and agrees to Stefano’s terms then grins knowingly to John and Justin.

Will and Ciara rush into the Kiriakis house. They exclaim over the gun and update Sonny on who Evan really is but he knows. Will says it’s over. They all know what he did. Evan shoves Sonny and brandishes his gun at Will. “Then you know what I’m capable of.”

Xander runs into someone he thought left town.

<p>Evan shocks Sonny by pulling a gun on him after Sonny dumps him for Will. Evan explains it’s not about that. It’s about his past… he needs help.</p>

<p>Dr. Marlena Evans and Will Horton show up at Statesville prison. They say their goodbyes to Ben Weston who is being put to death. Ben is innocent of killing his sister Jordan Ridgeway. Her shady ex-boyfriend Evan Frears (AKA Christian Maddox) killed her.</p>

<p>It’s the day Ben gets executed for being wrongfully convicted of killing Jordan, his sister. The governer calls at Abe’s behest but even he can do nothing without a confession or proof from Evan.</p>

<p>Ciara arrives at Statesville. Ben’s rocked to see her. She explains she knows who killed Jordan and found him. She runs off with Will to get a confession.</p>

<p>Ciara arrives at Statesville. She struggles with the guard as she tries to get a stay of execution for Ben.</p>

<p>Ciara watches as Ben is prepared for death. She tries to stop the progression of the execution.</p>

<p>Evan Freers, AKA Christian Maddox, pulls a gun on Sonny. He winds up with Will, and Ciara in his sights.</p>

<p>Ciara turns the tables on Evan. She’s a woman on a mission, wanting to get Evan to confess to killing Jordan so Ben won’t be put to death.</p>

<p>Ben lays on the bed as the doctor prepares to inject him. Ben only has minutes to live. He’s beside himself.</p>

<p>A guard stands with the doctor at Statesville. The doctor is ready to inject Ben. Ben is breathing heavily, in shock.</p>

<p>Rafe arrives at the Kiriakis mansion where Will and Sonny tell him all about crazy evan pulling a gun on Sonny. They explain how Ciara forced him to drive to Statesville so he could confess to Jordans murder.</p>

<p>Rafe is at Statesville, after learning what’s been going on with Evan, AKA Christian Maddox. Rafe holds a gun to Evan’s chest. They want a confession so that they can stop Ben’s lethal injection.</p>

<p>Ben’s heart stops when the doctor injects the last of the three syringes. Ben dies while everyone is scrambling to get Evan’s confession but the doctor’s quick thinking has him jamming adrenaline into Ben’s chest.</p>

<p>Ben and Ciara are reunited after Ben comes back to live when the doctor administers adrenaline. Looks like Ben will be released.</p>

<p>At the gatehouse, a flashback is shown with Evan getting a hold of Jordan to tell her he knows baby David is his. They argue about Evan being a part of his son’s life.</p>

<p>Evan commits murder. He uses a necktie to strangle Jordan, which of course made it look as if Ben killed his sister.</p>

<p>Jordan died at Evan’s hands a year ago. Evan strangled her with a necktie.  </p>

<p>Victor and Xander discuss their many secrets and lies at Julie’s Place. Where of course, nobody can overhear them!</p>

<p>Nicole and Kristen chat at the hospital. Nicole’s suspicious of Xander.</p>

<p>Victor and Maggie hold hands at Julie’s Place. They’re in a good place after he kept the truth from her about her DUI.</p>

After Ciara and Rafe Learn Evan Is...

Ciara Storms the Prison With a Gun...