Monday February 24, 2020: On Days of our Lives today, Maggie's memory comes back to her, Rafe takes Ben back to prison, and Victor vows to get Will out of prison if he agrees to stay quiet about Maggie's accident. 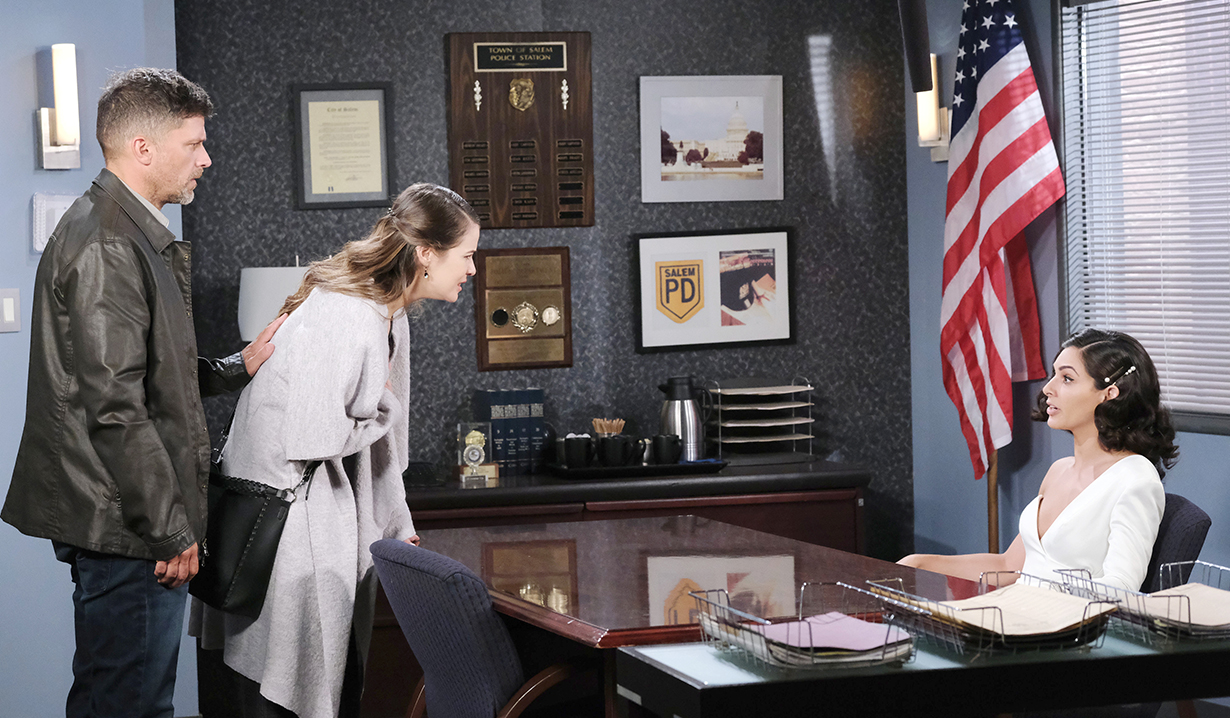 Ben turns himself in at SPD and asks the DA to let Ciara go, claiming that he coerced her into helping him escape. Ciara yells that he didn’t. Rafe cuffs Ben and allows them a minute to say goodbye. He thanks her for believing in him. She won’t give up finding David’s father. She sobs and they kiss as Rafe drags Ben away. In the interrogation room, Gabi sobs, realizing their daughter will have two parents in prison. Sonny hugs her. He’ll take good care of Arianna. Gabi thinks she should take her chances with the jury. “What are you gonna do. Download an app that makes the jury deaf?” Sonny asks, gently. Gabi realizes he’s right and wonders what’s wrong with her. 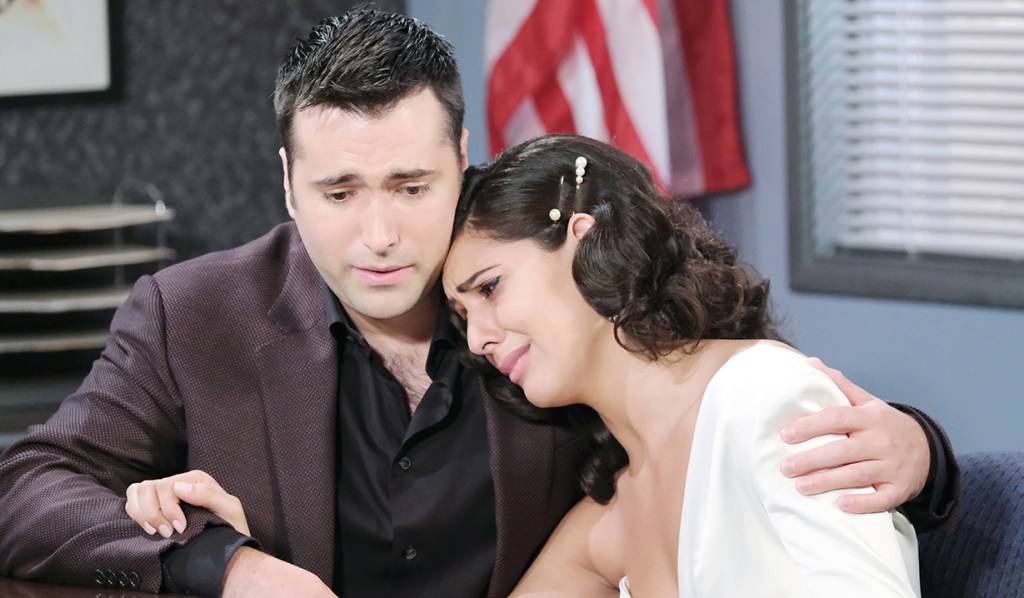 More: Only in Salem do these oddities happen

At Statesville, Victor vows to pull strings to get Will out of prison if Will keeps Maggie’s secret. Will reminds Victor that he has a life too. The only reason he and Sonny are divorcing is that Sonny thinks he killed his mother. Victor asks if he can keep his mouth shut. Will says yes but Victor had better work fast. He wants out. They shake on it. 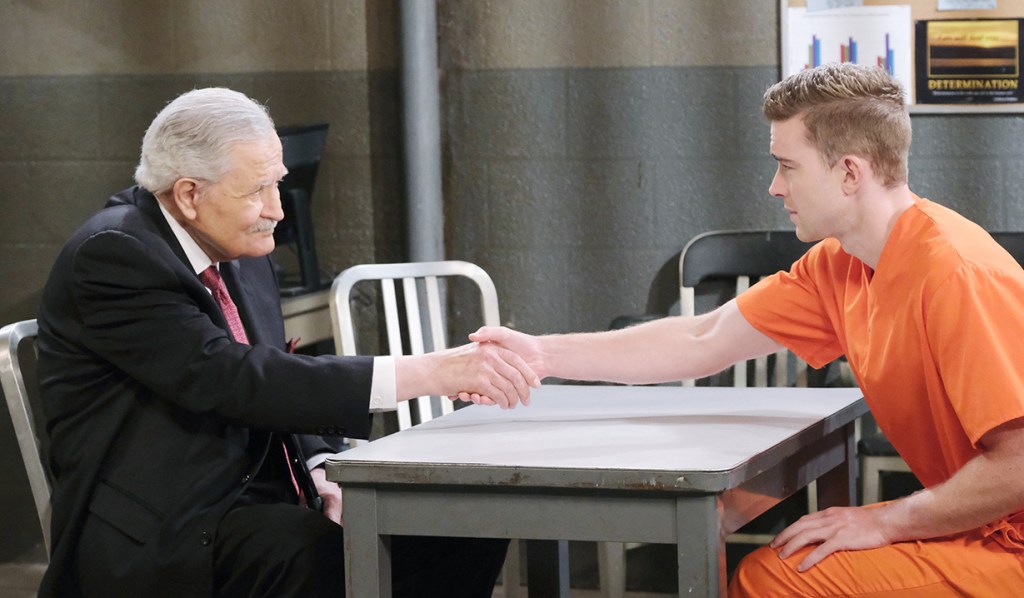 At the hospital, Maggie thinks about her conversation with Will about the night she fell off the wagon and appears out of sorts. Xander asks if she’s okay and she hears his voice and starts flashing back to Xander asking her if she was okay in her car. She claims she must have deja vu and tells Xander what she remembers. Meanwhile, Sarah and Eric have learned Gabi is a match for Mickey and they go tell Maggie and Xander.

At home, Xander urges Maggie to have a nap then goes to Victor in the great room. They discuss Victor’s agreement with Will to keep quiet and Xander lets Victor know that Maggie’s beginning to remember the night she drove drunk. Victor’s worried. Upstairs, Maggie can’t shake her confusion and then remembers everything. She cries out that she was drunk and had a blackout. 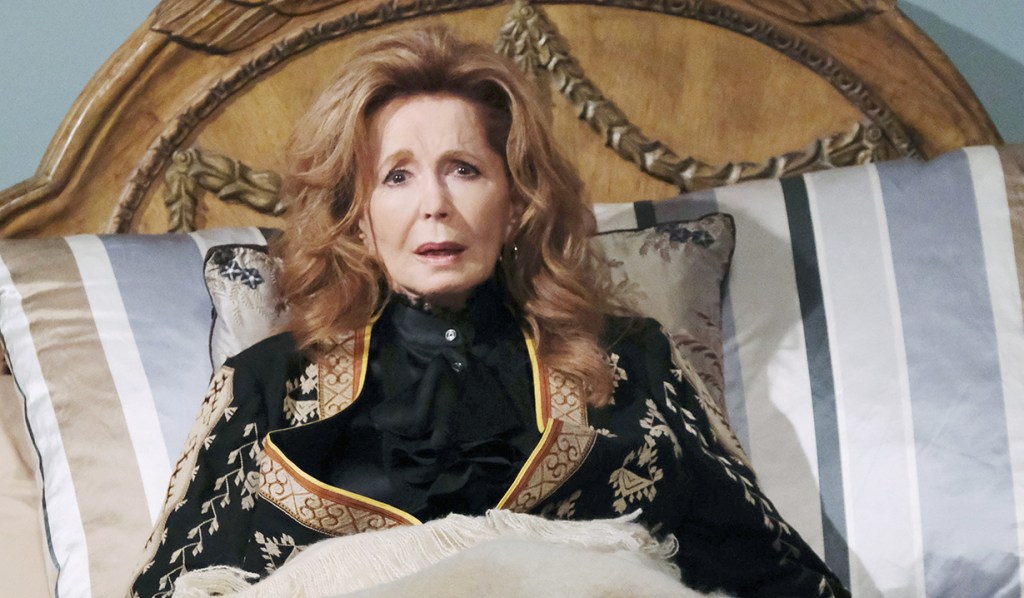 Eric and Sarah arrive at SPD just as Gabi’s about to agree to the 10-year prison sentence. Sarah tells Gabi her bone marrow is a match for Mickey’s. Gabi’s shocked and finds it amazing. Sonny leaves to get the DA. In the outer room, Rafe tells Ciara she’s lucky the DA is looking the other way. Ciara doesn’t care because Ben’s going to be put to death for something he didn’t do. Rafe tells her to face reality. She cries and asks for help. She tells him about her theory that David’s father killed Jordan. Rafe tried to look for him so he’d sign off on the adoption. “The guy vaporized or something,” because Rafe couldn’t find him anywhere. As they talk, Ciara wonders if the DNA found wasn’t David’s but that of David’s father. He checks the case files and notes the DNA isn’t quite a match. He agrees to enter it into a federal database. Back in the interrogation room, Gabi lets Eric and Sarah know she hasn’t agreed to the surgery. When the DA returns, Gabs tells him to take his deal and “shove it.” The DA leaves and Gabi refuses to go back to prison. She tells Eric and Sarah to make the charges disappear if they want her bone marrow to save their sick baby.

In his cell at Statesville, Will decides to file divorce papers. Ben arrives. He jokes that he missed this place and it’s fish sticks night. Will asks why he’s back and learns he turned himself in. Ben relays everything that happened and touches base on Ciara’s theory on who really killed Jordan. Will thinks it’s a longshot, “But it’s not nothing.” Ben asks why he’s still there. Will shares that Maggie was so wasted the night of the accident that she doesn’t recall it and how Victor convinced him to stay quiet. Ben’s pissed and demands he call Sonny and tell him. Will can’t. Ben tries to talk him out of throwing his life away. 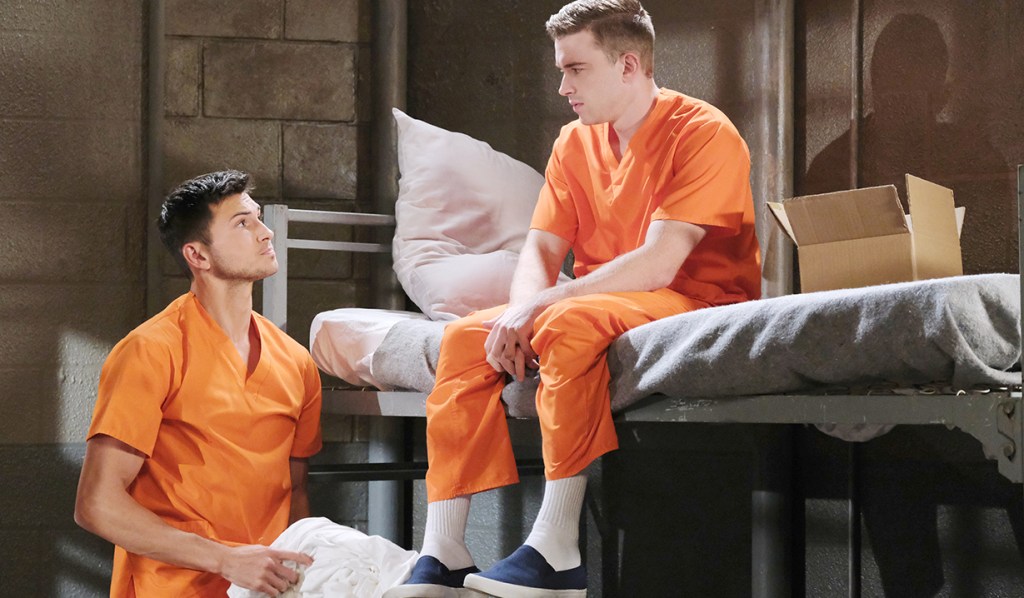 Sonny returns home. He overhears Victor saying he went to see Will and is dreading telling Arianna about Gabi’s incarceration. Victor’s shocked to hear Gabi’s a match for Mickey. “How can that be?” Sonny goes to tell Ari and thinks it’d be easier if Sonny knew the truth but he needs to protect Maggie. Maggie appears and tells the men that Will didn’t kill Adrienne.

Sarah and Eric are faced with a tough decision.

Ciara Bashes Rafe’s Head In With a...

Maggie Screams Upon Realizing She...