Friday February 21, 2020: On Days of our Lives today, Ciara learns Hope turned into Gina, Gabi is given a plea deal, and Mickey gets a donor match. 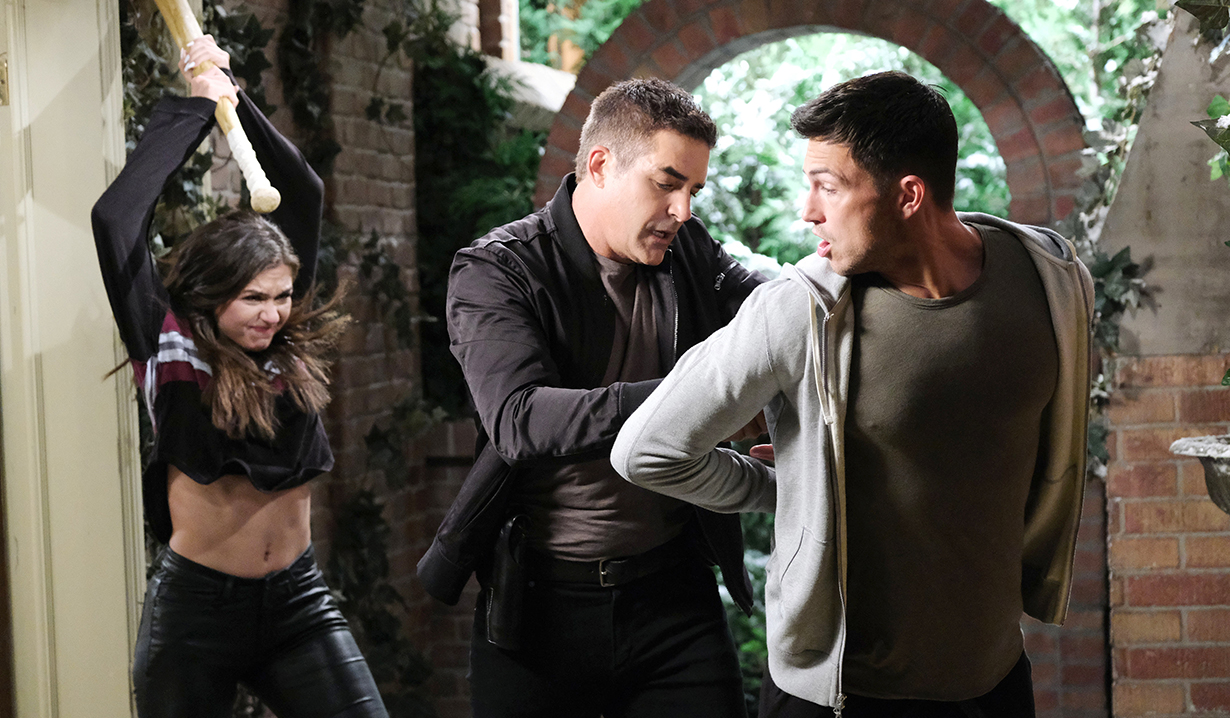 Rafe catches Ben leaving the gatehouse and his mouth drops open. He aims his gun at Ben. “I was really hoping you weren’t a complete idiot.” Ciara begs for mercy but Ben tells her it’s over. Ciara asks him to look the other way the way he did with her mom. Rafe says that was a big mistake. He tries to cuff Ben and Ciara bashes him with a baseball bat. Rafe goes down and Ben looks at her in shock. He checks on the cop and says, “At least you didn’t kill him.” He takes off. Ciara wakes Rafe up and apologizes. “You helped a wanted man get away and now you’ve assaulted the police commissioner?”

Sonny visits Gabi at SPD. He’s angry. His father doesn’t think there’s a way for her to avoid prison. He asks who gets the fun job of explaining this to Ari. Ari loves Julie. How’s he supposed to explain that her mother tried to kill her multiple times? Sonny yells, asking if Gabs knows her daughter even exists. He punctuates his anger by pounding the table. Gabi finds what he’s saying horrible but Sonny says he gets to be horrible. Gabi whispers that Julie needed to pay. Sonny shakes his head. He can’t get through to her. Gabi sobs that she loves her daughter and will lose her. “It’s not fair.” DA James Giddens (played by Terrell Tilford) arrives. He says Gabi will get 10 years in prison. No time off for good behavior and no parole. “Take it or leave it.” If this goes to trial, he’ll ask for a life sentence and calls 10 years a gift. Giddens goes and Gabi wonders what she has done.

At Statesville, Maggie asks Will why he asked her to visit. Will flashes to Ciara telling him to come clean so he can be set free. He asks if he can be tested as a bone marrow donor for Mickey. Maggie cries and thanks him. Maggie apologizes. She should have visited sooner but it hurts her seeing him there. The worst night of his life was hers, too. She confides about her drunken binge caused by her guilt over Summer’s. Maggie has no memory of that night. “I let both of my girls down,” she says. Will asks how she knows she didn’t drive. Mags doesn’t know. She assumed. Will smiles. Maggie prays Will gets a second chance.

Nicole arrives at Basic Black. She tells Eric that everyone there has tested to become a donor. Someone will be a match. She gives him a drawing from Holly and finds flowers. She’s overcome.

At the Kiriakis mansion, Sarah tells Kristen, Brady, Xander, and Victor that the hospital found a bone marrow match for Mackenzie. She leaves the room and calls Eric while Brady continues his tirade to Victor and leaves. Sarah returns and almost hears Xander talking about Mickey being Brady’s. Sarah lets them know Maggie went to visit Will. She goes to get Mickey and Xander and Victor assume Ciara told Will the truth. Victor asks him to go to the hospital and they’ll come up with a cover story if Tate’s the donor. Vic takes off to Statesville.

Kristen and Brady arrive at Basic Black. They discuss the bone marrow match. Brady worries it’s Tate and explains that Victor had him tested behind his back. Nicole gasps. Wasn’t that a long shot? None of them finds that it makes sense. The odds are still astronomical. Brady knows his granddad doesn’t do anything without knowing the odds. Kristen thinks the flowers are for her but Nicole sets her straight and as Brady takes a call, the women rehash Kristen’s misdeeds and trade barbs.

More: Days column – only in Salem

At the hospital, Sarah and Xander talk about what comes next with Mickey’s surgery. Eric walks up. 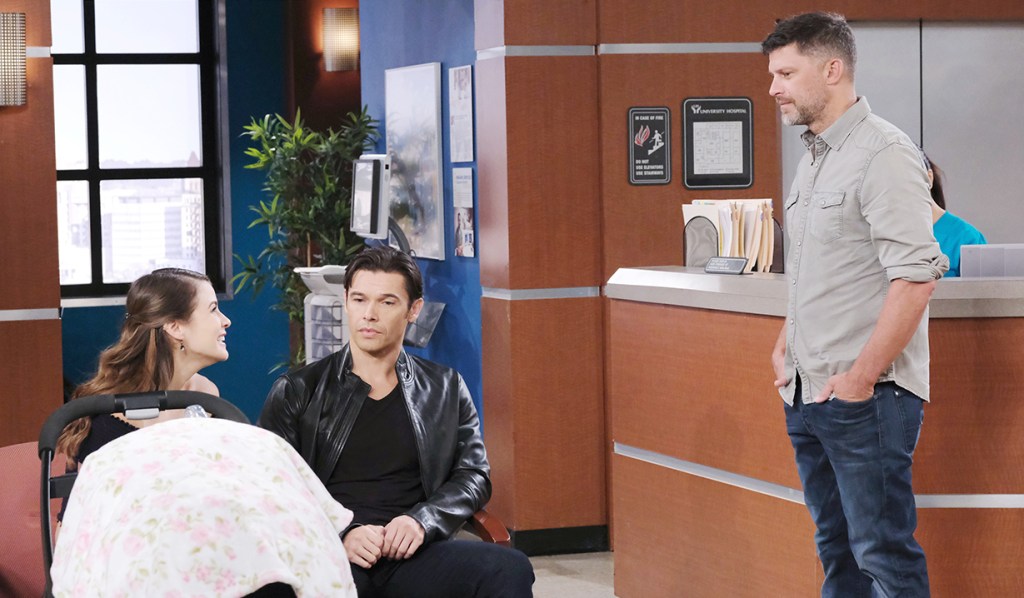 Victor arrives at Statesville as Will is trying to get Maggie to remember the night she drove drunk. Victor tells them that Sarah found a match for Mickey. Sarah wants her at the hospital so Maggie runs away. Will comes clean about knowing Victor kept Maggie’s DUI a secret. Will knows he didn’t kill Adrienne. Victor asks if he’s thought about how Maggie would feel knowing she killed her own… Will asks, “Her own what?” Victor begs Will not to tell the truth.

At SPD, Rafe has told Ciara about Gina taking over her mother. Ciara asks why she’s just hearing it now. Rafe snaps that she was harboring a fugitive just as the DA appears. Back in the interrogation room, Sonny urges Gabi to take the deal. Later, Ben turns himself in before the DA is about to throw the book at Ciara.

Maggie arrives at the hospital. Xander asks how Will is. She flashes to Will asking if she’s sure she didn’t drive and looks confused. She starts to remember Xander talking to her when she was drunk. Elsewhere, Sarah learns who the donor match is and seems surprised. 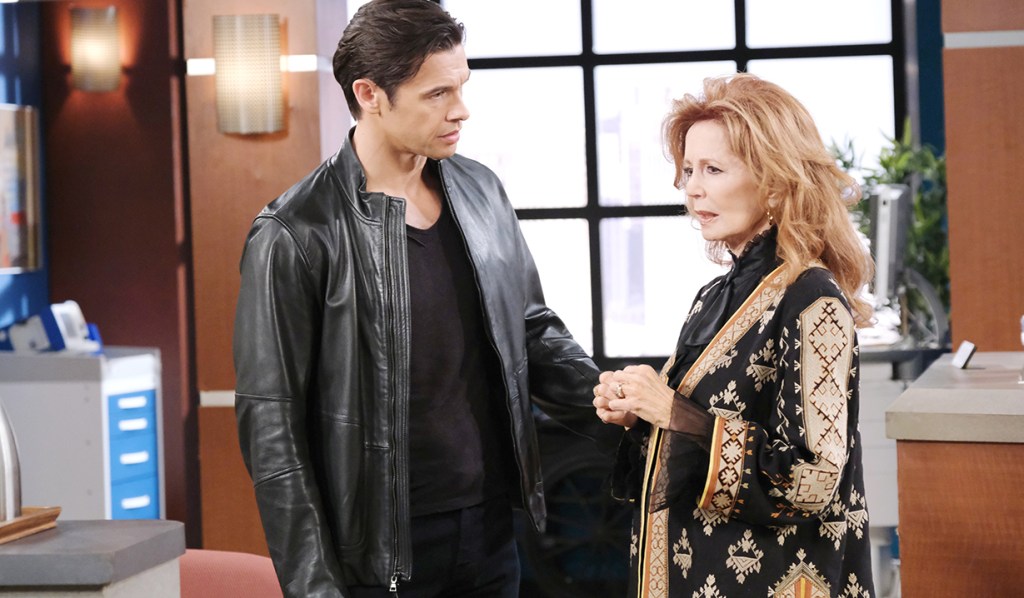 Victor puts pressure on Will.

Ben goes back to prison.

Before Ben Takes Off on the Run,...