Tuesday February 18, 2020: On Days of our Lives today, Julie shocks Gabi and the wedding guests with a secret, Doug and Jennifer remember the old days when Jennifer learns who died, and Rafe can't get over what his sister has done. 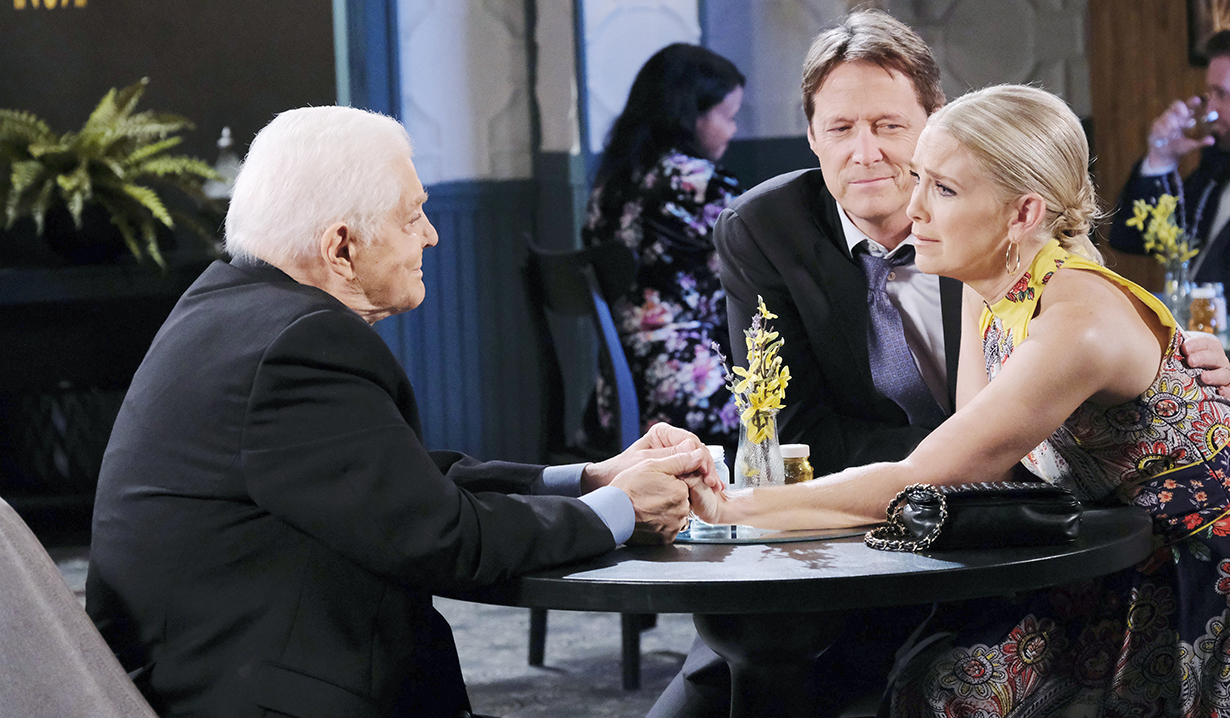 At the square, Rafe moves to take the cell phone from Gabi but she snatches her hand away. Julie passes out after Gabi zaps her, which puzzles Valerie since her pulse is strong. Julie opens her eyes and tells them she’s never felt better in her life. Gabi’s jaw drops open. Julie insists she’s fine. Finally, Chad grabs Gabi’s phone and Julie says she’s faking “and you fell for it. The murder app is completely useless,” Julie finishes. JJ tells Gabi how he met Chris this morning. He has a record. He realized Gabi must have sent him and he didn’t deny it. JJ made sure Julie got a new device and that Chris was sent to jail. Julie reminds the room that Gabi murdered Nick and Gabi clutches her head, asking her to stop. Lani tells them Theo was in on it and they told Julie in advance. Julie apologizes for the scene but felt it was necessary to catch Gabi. Gabi apologizes to Eli but he doesn’t believe she’s sorry. Gabi maintains that she fell in love with him but was afraid of what he’d do if he learned the truth. She looks at JJ, she thought he was her friend. He thought she was his. Julie scoffs that she was ready to welcome her into her life. Gabi asks her to shut up, “Just for once in your life.” Julie apologizes to Lani for how she’s been treating her. She breaks down crying. She’ll be grateful for Lani’s sacrifice. Abby and Chad decide to drive Julie to see Doug. JJ hugs Lani and urges her to talk to Eli, who looks at her, shakes his head and walks to the park. 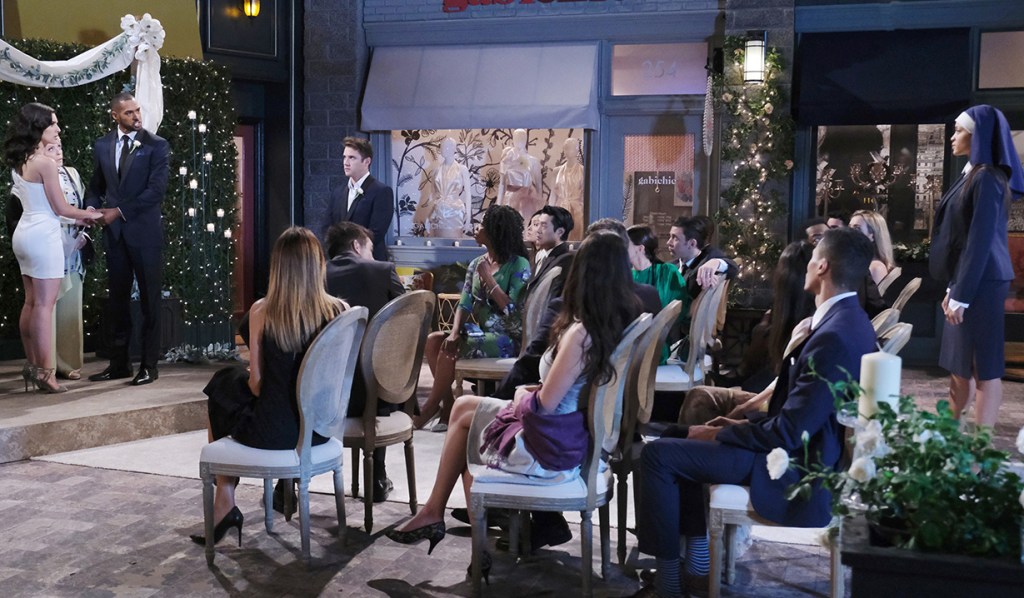 At Julie’s Place, Jack and Jennifer try to comfort Doug who can’t get over how Hope was taken over by Princess Gina. Jenn goes to take a call. She returns, upset. Lucas called. “My father died,” she says, breaking down. She hugs Doug. He had a heart attack in his sleep. Jack’s sorry. Jenn says it’s no shock. His health was declining since he had heart surgery but he’s been devoted to his patients and refused to come home. Jack remembers him as a hard worker. Doug calls Bill Horton a good man. He’s known him for 50 years. Brent Douglas was his real name. He met Bill in prison and recalls one inmate trying to kill Bill with a knife until a guard showed up. Doug talks about wanting to con Susan Martin out of her inheritance but when he met Julie, he set his sights on her instead. Doug owes everything he is to Bill Horton. Jennifer emotionally recalls her dad giving her a set of pearls on her wedding day. Doug comments that they seem to get together for funerals more than weddings these days. Abigail, Chad and Julie arrive and fills everyone in on what went down at the wedding and that Gabi was arrested. Doug muses that she could have been killed. Later, JJ appears and they all mope over Doug’s visit to “Hope.” Julie vows they’ll get their daughter back. Doug agrees but has more bad news. Jennifer shares that Bill Horton died. Julie cries out and Abigail looks stunned. Julie hugs Jennifer. The family will all head to Africa except Chad who will stay home with the kids. Jack calls his son extraordinary for all he has done, which took courage. Jack’s proud. They embrace. Everyone files out and Doug says if it wasn’t for Bill Horton, he never would have met Julie at all. He flashes back to their time in prison and first meeting Julie and kissing her hand. Julie recalls his time as mayor, club owner, world traveler, and father, as they reminisce about Bill’s 50 years. Julie thanks her husband for the love and passion. She can’t imagine her life without him in it. Nor can he imagine life without her. They embrace and kiss. 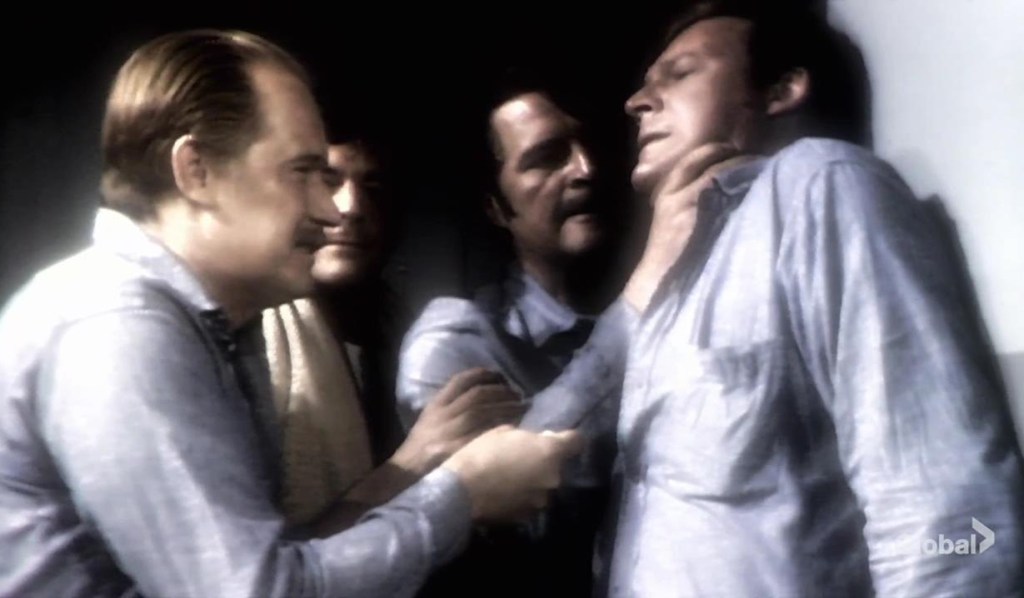 More: Who was Bill Horton – a history

At SPD, Rafe goes to Gabi in the interrogation room. How could she have done this? Gabi cries and explains she did it out of love. She needed someone to blame. Rafe argues that it’s not Lani’s fault. Gabi snarks that he’s taking her side but Rafe’s not taking sides. Gabi felt the Hortons treated her like crap and she wanted payback. She wanted them to feel her pain. She blames Lani for stealing Eli from her in the first place. Rafe denies that Lani meant to do that. 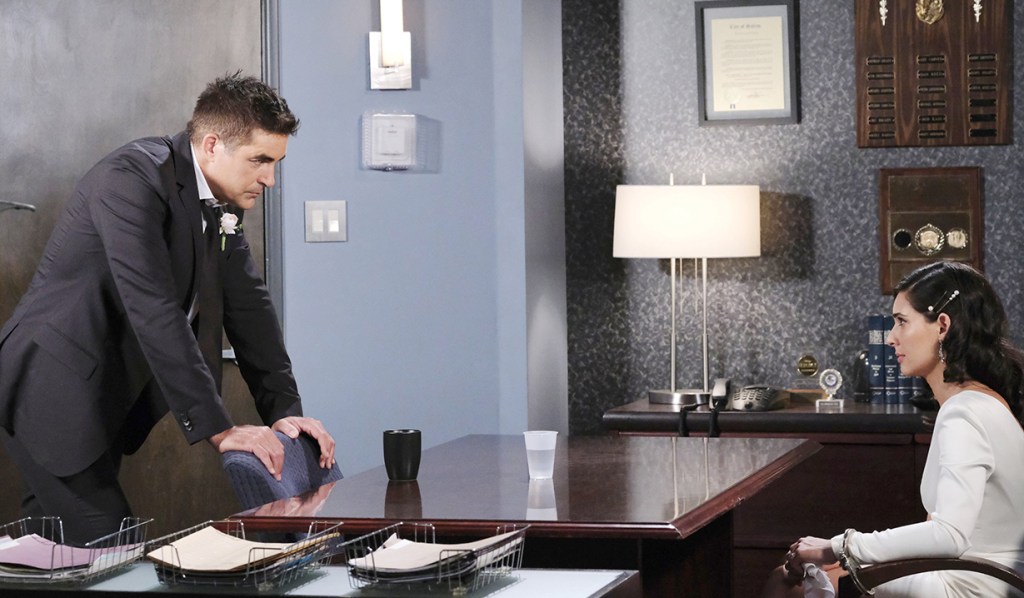 Lani follows Eli to the park. Why didn’t she tell him the truth? She couldn’t risk it. Eli spits that she told JJ. Lani says he was just promoted to Police Commissioner and Gabi was watching her every move. She didn’t plan on telling JJ. She’s been hiding the secret for more than a year. Lani professes to still love him.

More: Tour the set of Days of our Lives

At the DiMera house, Chad and Abigail kiss goodbye.

John and Marlena get romantic.