Tuesday February 11, 2020: On Days of our Lives today, Marlena and John are reunited, Stevano turns to an angry Kayla for help, and Kate saves Rafe. 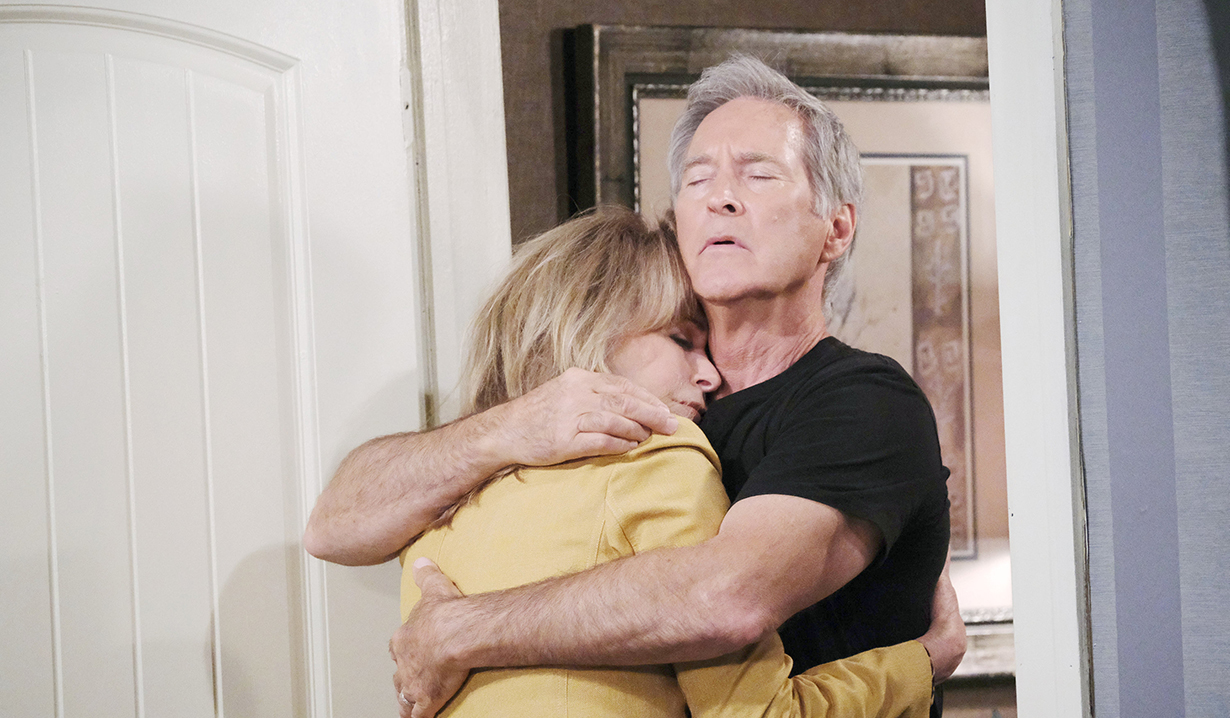 Jack and Jennifer arrive at the SPD, where Shawn updates them on Hope being turned back into Princess Gina. They’re dismayed to hear she’s in Prague and may have kidnapped Marlena. Jennifer feels Rolf’s responsible and remembers ‘Hope’ coming up behind her as she was putting his flashdrive into her laptop the night she fell. She shakes her head, “It can’t be.” She recalls seeing Rolf’s plan to change Hope into Gina and trying to warn her. Hope told her, “I am Princess Gina,” and pushed her. Jennifer gasps, “Hope is the one that pushed her.” She realizes it’s why she framed Eve. Jack hugs Jenn and reminds her it wasn’t Hope. He’s glad Jennifer didn’t remember sooner – it was probably the only thing keeping Gina from killing her.

In the Prague dungeon, John tells Rafe and Kate that he was drugged by Hope, who thinks she’s Gina – she took Marlena hostage. Rafe takes off to find her. John questions Kate being there. She deflects and wants to take him to a doctor. He’s concerned with saving Marlena but collapses when he stands. Kate tries to rouse him and starts CPR; he’s not breathing. He comes around as Rafe returns saying he couldn’t find Marlena and Gina. Meanwhile, Gina has Marlena open her suite door at knifepoint. Marlena tries to tell her she’s been brainwashed, and that John doesn’t have feelings for her. Gina doesn’t want to hear it and thinks Stefano must be furious she escaped. Marlena relays how they played him. Gina makes a call to ready a plane at a private airstrip. Marlena unsuccessfully tries to convince her they should check on John. Gina directs Marlena to leave but Roman’s there. When Roman calls her ‘Gina’, she shoves Marlena and runs off. Outside, Gina’s stopped by Rafe and is knocked out as she wrests herself free and falls. Upon awakening, she asks why Rafe’s calling her Gina. She’s stunned to learn she’s in Prague and remembers finding Rolf’s lair. Rafe thinks she’s Hope again and explains she was turned into Gina. She’s distraught to hear she tried to kill John. Rafe holds her. In the hotel, Roman’s trying to convince Marlena to see a doctor when John appears to embrace her. Marlena asks Roman to let the SPD know about Hattie and Stefano as he goes. John tells Marlena he thinks Steve’s dead. She relays he’s alive, but he’s not Steve…it’s Stefano. John recalls finding the Phoenix ring and reflects that no one can keep them apart. Outside, Gina raises the knife to stab Rafe as he’s holding her. Kate races up and grabs it. “Not today, Bitch.” Rafe slowly realizes he was duped as Gina seethes, “Hope’s gone.” 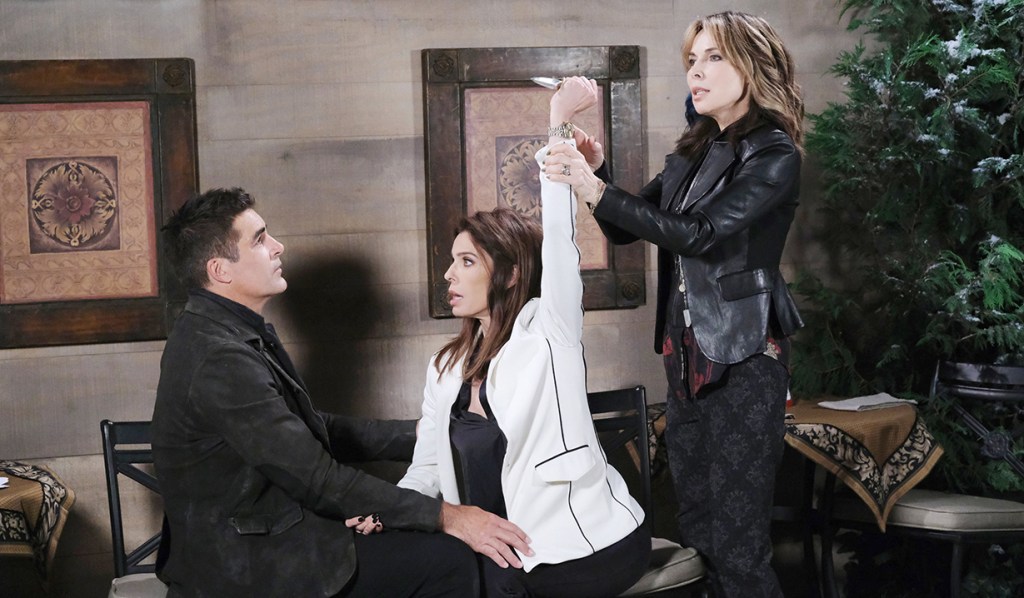 In Princess Gina’s loft, Hattie cowers behind the throne and Abigail screams as Chad struggles with Stevano for the gun and it goes off. Stevano is shot. As Chad tells Abigail to call 911, Stevano rallies, knocks him out, and takes off. Chad assures Abigail he’s fine as Hattie complains they’re locked in. Chad asks Hattie about Stefano looking like Steve. Hattie fills them in and Abigail gawps. “How is that even possible?” Chad quickly says, “Rolf.” They learn Hope is also Gina. Hattie predicts John and Kate will find Gina and slap the snot out of her. Chad’s upset about Kate keeping the secret. Hattie explains she was promised a job at DiMera. Hattie gets back in the throne and cozies up in a blanket as Abigail eyeballs her. Chad’s confused about his father and is glad to have Abigail. They kiss. Hattie’s bored and wants her ‘royal subjects’ to entertain her. Chad and Abigail are listening to her when Shawn busts in and asks, “Where’s Stefano?” 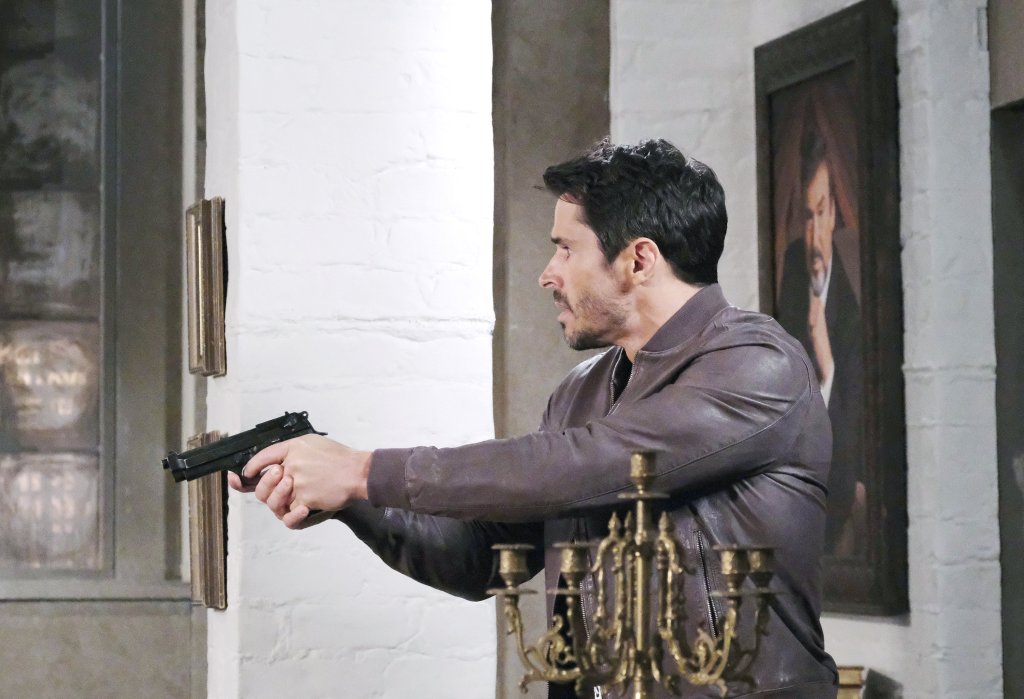 Kayla’s stunned to see a wounded ‘Steve’ in her office at the hospital asking for help. Kayla inspects his bullet wound and thought he was in Prague. ‘Steve’ tells her he and John returned from Prague and Marlena was kidnapped – Stefano shot him. He locks the door and Kayla argues with him about going to an operating room. Kayla gets to work while remembering another time she patched him up. ‘Steve’ recalls it was at the emergency center, but Kayla retorts it was in his basement – how could he forget? Stevano covers. Kayla admits she’s wracked her brain to figure out what she did to change his feelings. Stefano grunts that people grow apart, feelings fade. Kayla doesn’t think it makes sense – they were closer than ever when he left. She’s decided she was delusional and rants about his disinterest in their children. Kayla’s physically ill over the pain he’s caused. Stefano suggests they not discuss the past. Kayla shakes her head and fumes. Kayla’s phone rings – it’s Roman. Stefano asks her not to answer. Roman leaves a voicemail warning her Steve’s not Steve. Meanwhile, Stefano has one more favor to ask of Kayla. 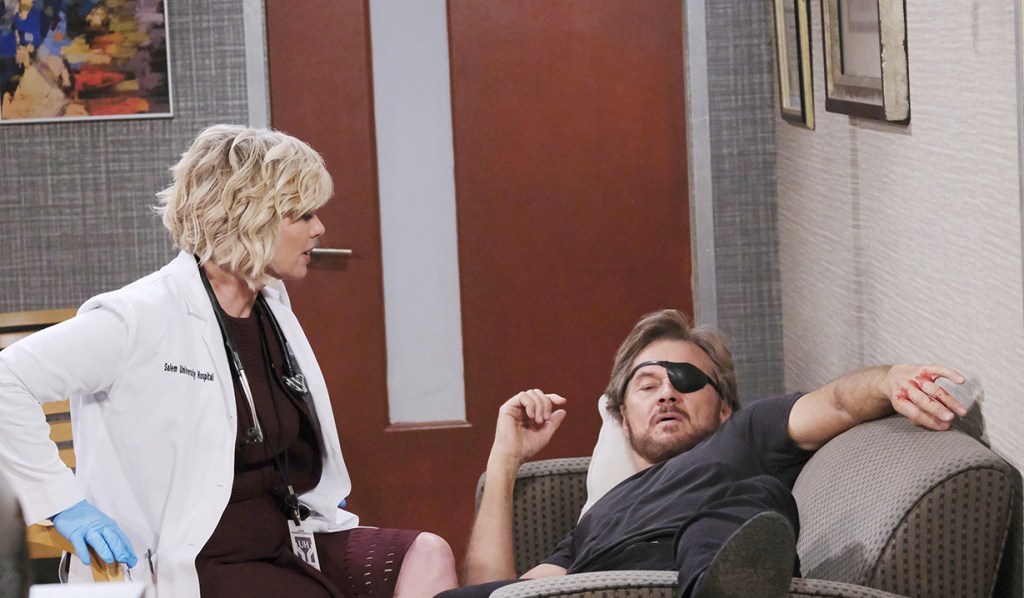 Kristen keeps a secret from Brady.