Stefano Reveals Himself to Marlena, and She Shocks Him With a Welcoming Response and an Admission

Friday February 7, 2020: On Days of our Lives today, Stefano tries to convince Marlena she's drawn to him, Ben and Clyde start to break out of prison, and Gina threatens John's life when he refuses to make love to her. 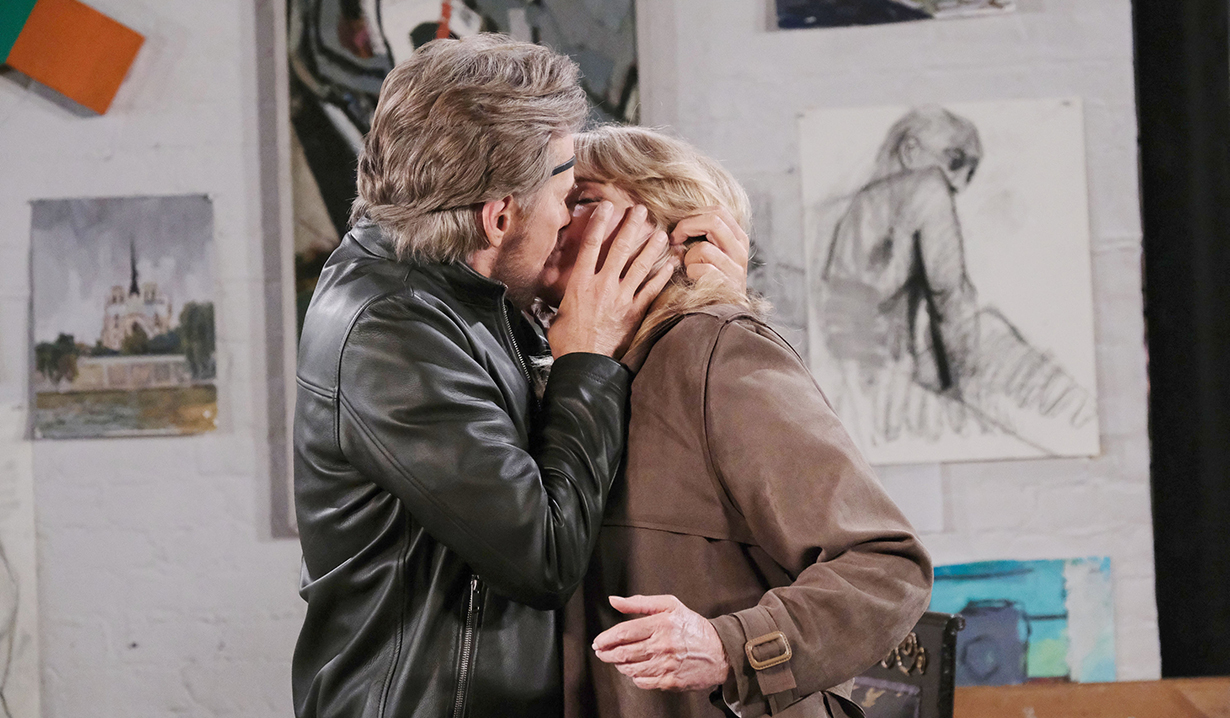 In Prague, Rafe leaves a message for Shawn with an update. Kate appears, surprising him. She flashes to telling Hattie that Marlena’s in danger and tells Rafe she’s there to join the search for Marlena and Hope. Rafe says he’s there to find Princess Gina. He tells Kate about Stefano brainwashing Hope and how they believe she kidnapped Marlena. “Hope is not the only person that is infested with a host.” He says Steve Johnson has been compromised. He fills Kate in on Steve’s outburst at Anna. Kate acts surprised and tries to throw doubt on him being compromised. When that doesn’t work, Kate comes clean and tells Rafe that Steve is Stefano. She tells him everything. Rafe’s pissed that she knew this whole time. Kate wants to fix it. Meanwhile, in the dungeon, a drugged John makes out with Princess Gina, thinking she’s Marlena. When he sees Hope’s face, he exclaims, “What the hell.” Gina tells him he was about to make love to her. She kisses him as he looks around, feebly. John complains that his brain is foggy. Gina gave him something to relax him and asks him to admit he has feelings for her. He runs his hands through his hair and calls them friends. Gina calls him dashing, like Cary Grant. John repeats that they’re just friends. She reminds him of them having sex back in 1999 in the submarine. He flashes back as she explains she’s not Hope but Princess Gina. John looks horrified as Gina tells him Hope is somewhere inside her but that Rolf brought her back to life. John says he should have seen this coming. He yells, “You drugged me,” and shoves her away. He doesn’t love Gina. He has only ever loved Marlena. Gina snipes that she’s gone and she’s happy she made that happen. She lies that she killed Marlena. John will make her pay for this. He stumbles toward the door and laughs at her. Gina’s offended and threatens his life. 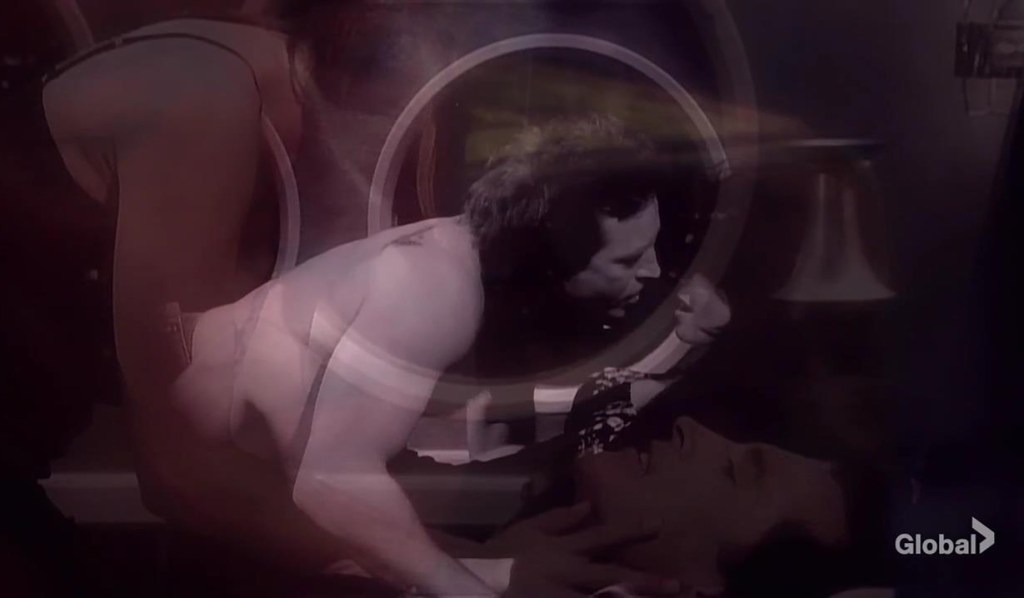 Kristen’s shocked to find Chad and Abigail in her room at Salem Inn with Steve’s portrait. They tell her it looks exactly like Stefano’s portrait and asks her if this is what he looks like now. Kristen lies that Stefano looks like himself. Abigail reminds her she said she hardly recognized him. Kristen says a lot of time has passed. Chad and Abigail remind her that different personalities have been known to inhabit a body. Kristen shrugs that off to her Dissociative Identity Disorder. Chad smiles and asks his sister to come clean. Kristen denies hiding anything and invites them to search her place. Since they’re getting nowhere, they go, leaving the portrait behind. 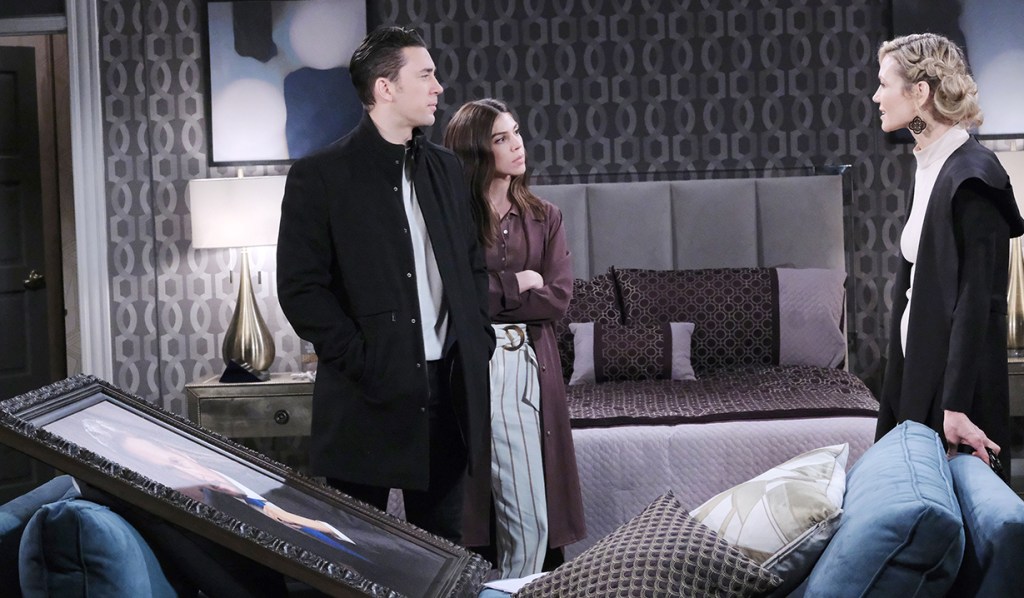 Stevano plants a kiss on Marlena’s lips and she shoves him back demanding to know what he’s doing. “Steve” says they’re both in pain and calls it natural to do this. Marlena says it’s not the answer. Kayla’s her friend and kissing him is wrong. Stevano tries to convince her otherwise and when that fails, he spills the truth as he takes off his patch and puts on his phoenix ring. “It is I, Marlena. Stefano DiMera. And it is so good to be back.” He shares that Rolf kidnapped Steve and put his “very being inside of him.” He came back for her. Marlena says there’s no way she’d ever be with him no matter how he looks. “I still hate you.” Stefano thinks she’s always been drawn to him. Marlena snaps, reminding him of the time he locked her in a cage. Stefano thinks she would have been more open to him if she wasn’t so loyal to his “pawn.” John wasn’t a pawn to her. Stefano asks her to let down her guard and see what she’s been missing. He talks about a life of bliss with him and finally, Marlena grabs Stefano and makes out with him. Stefano’s shocked. She pulls off his clothing and then stops. “I can’t do this to Roman,” she exclaims. He’s the one she loves – the man of her dreams. Stefano realizes it’s Hattie – not Marlena.

In Statesville, Ben has filled Will in on the date of his execution. Will’s sorry. He didn’t expect it to come so soon. Ben says he’s out of options and decided to take Clyde up on his offer to break out of prison. Will’s stunned. Does he think it’ll work? Ben believes Clyde can make it happen. They talk about their friendship. Ben will always be grateful to Will for forgiving him and for their time there. “Me too,” Will says. Ben asks him to break out with them but he can’t so Ben tries to convince Will to tell the authorities that Maggie was responsible for the accident. Will wishes Ben luck. He deserves to be free. “You too,” says Ben as they embrace. Clyde sidles up, “Okay girls, break it up.” Clyde wants Will to take a hike since he has business to discuss with his son but Will plans on helping with the escape. Later, Ben and Clyde are in the gym. Clyde says he paid off the guard and gets to work on cutting away the fence. In their cell, a guard, (played by Cirroc Lofton), does roll call and Will lies that Ben’s sick. The guard finds pillows in Ben’s bed and calls in an escape in progress. 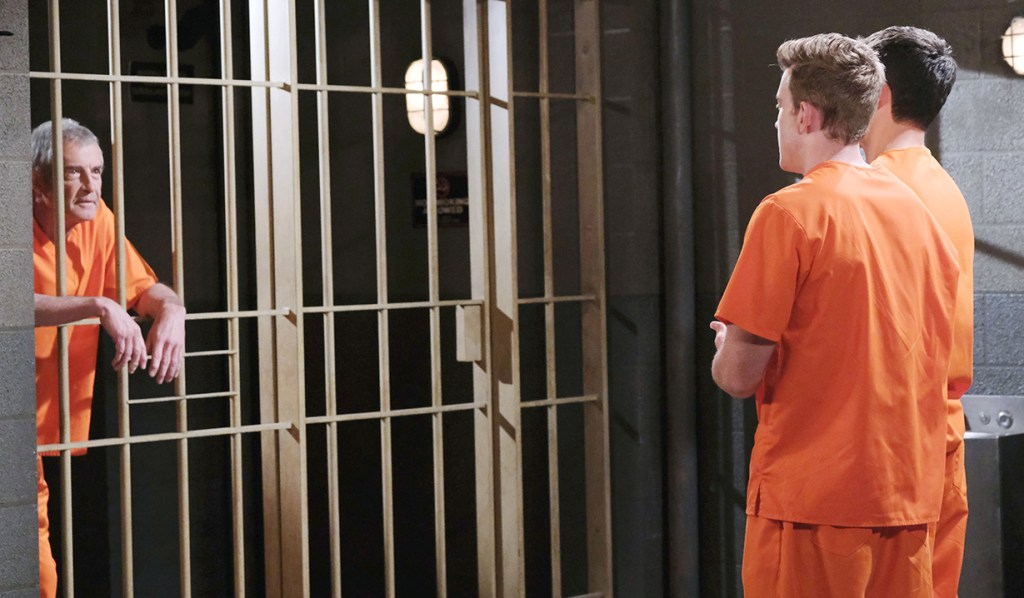 Back in the Prague dungeon, Princess Gina shoves a hand in her jacket and comes out with a letter opener. She’s ready to stab John when Marlena opens the door and yells at her to stop.

Ciara Comes Up With a New Theory...