Monday February 3, 2020: On Days of our Lives today, Rafe and Roman work hard to find Marlena and Gina, Kristen shocks Nicole, and Eric learns something about Nicole he didn't know. 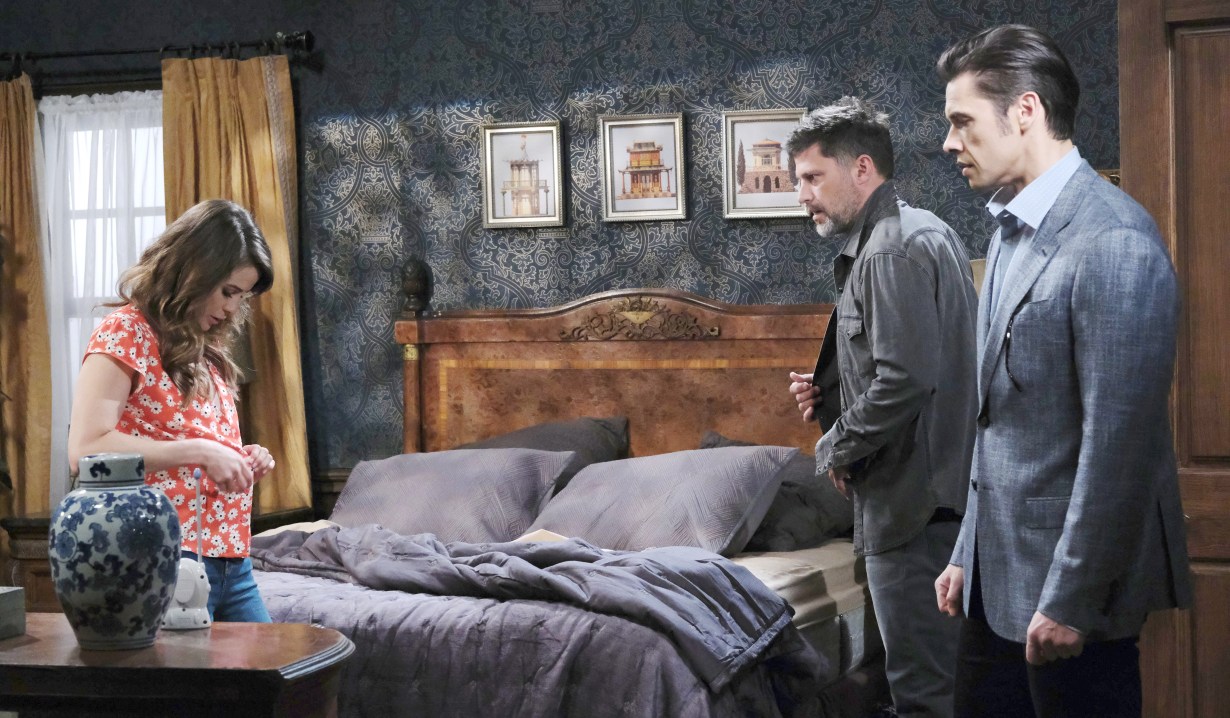 On her bed in the Kiriakis mansion, Sarah tells Eric if he needs anything, he only needs to ask. They stare at each other’s lips and start making out. Sarah laughs and pulls away. That’s not what she meant. She’s been leaning on him a lot and wanted him to lean on her. They get into why Eric’s lack of forgiveness for Nicole and how he’s not angry with Sarah. They admit their fears for their kid and start kissing again.

At Eric’s place, Xander and Brady argue about whether Tate should be tested as a possible match for the bone marrow transplant. Brady calls it a longshot and asks why he’s pushing this. Kristen appears at the open door and questions them. Kristen needed her signature for Titan. Nic signs and Kristen asks if Tate’s sick. Brady says he’s not. Xander tells her about Mackenzie needing a bone marrow transplant. He asks if she’ll be tested. “Of course,” Kristen says. Nicole clutches her stomach, “Oh my God, I think I need to sit down,” she says since Kristen is doing something selfless. Kristen doesn’t want Eric and Sarah to go through the pain she and Brady went through. Xander’s grateful. 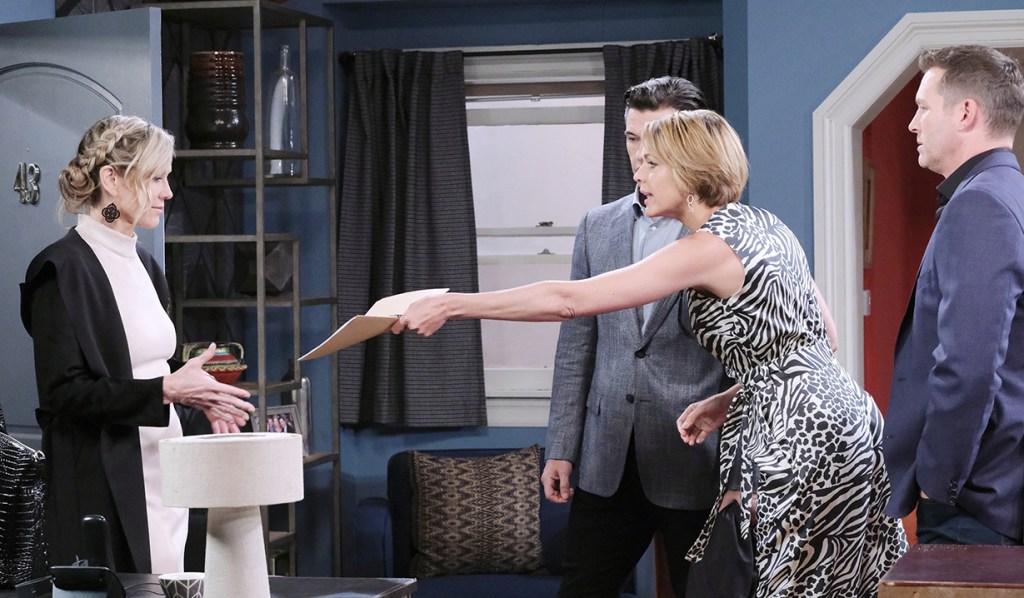 At the gatehouse, Abigail and Chad find a portrait of Steve. They find it looks so different. There’s no patch and it looks similar to Stefano’s portrait. Chad points out the phoenix ring on Steve. They ponder what it is. Abigail thinks it could be a prank but Chad smirks. “DiMeras don’t do pranks.” They agree it’s bizarre. It looks like Steve sat for it. Chad wonders if his father changed his face to look like Steve Johnson. Abby calls it crazy and asks why he would. Chad calls it a tactical advantage. They start putting two and two together and realize he told Kristen but not Chad because he knew Chad would tell Abby and she’d tell her family. Chad needs to talk to his sister. He’ll play Kristen and Stefano off each other. Abby refuses. Chad knows it’s dangerous but has no choice. 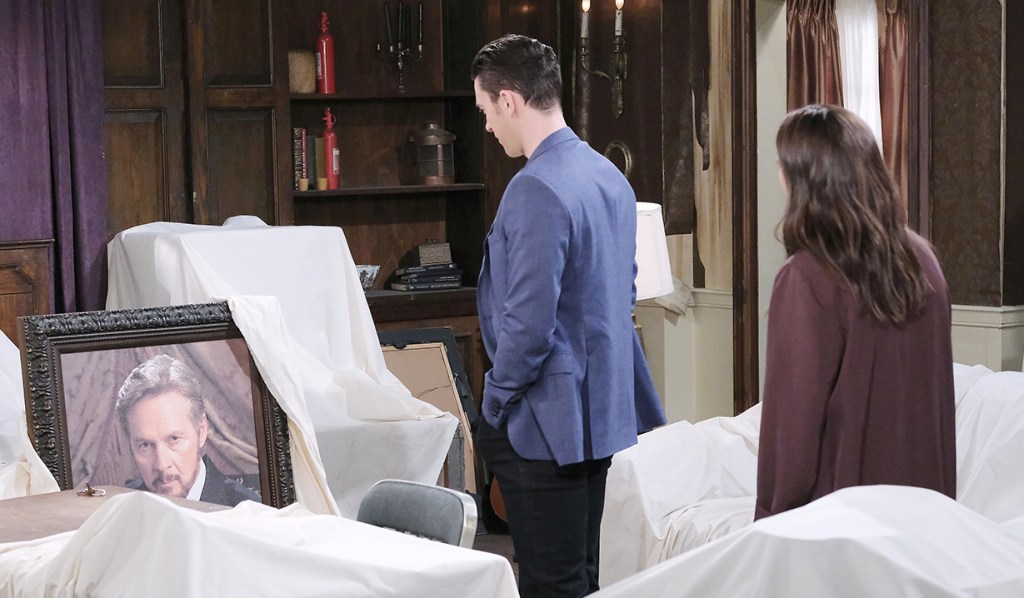 At Princess Gina’s loft, Marlena sobs that she can’t believe she won’t see John again. “Steve” apologizes. John was his best friend. Stevano says his final request was that he take care of her. And he will. Marlena collapses into his arms. She pulls away suddenly and says she can’t stand to look at him. She blames him. She begged John not to go but he insisted because he thought Steve needed him and would protect him. She laments not being there to hold him when he died. She calls him arrogant and careless to underestimate Stefano. “I don’t know who you are, Steve. I don’t know what’s happened to you.” Stevano promises he did all he could to protect John. Marlena apologizes for lashing out.

In the dungeon in Prague, “Hope” lies that Stefano shot and killed Marlena. John backs away in shock. “Hope” cries that it’s true as John’s legs buckle and he collapses to the floor, crying. Princess Gina holds him and smiles as she says she’s sorry. John stops crying. He doesn’t believe she’s dead. He takes the pick “Hope” used to unshackle him and works on the lock. When he can’t unlock it, Gina tries. She breaks the pick intentionally and feigns anger. John yells and then shares that he’ll never believe Marlena’s dead until he sees her.

At SPD, Roman can’t reach Steve or John. Rafe says Shawn checked in but hasn’t found anything. They wonder where Gina would take Marlena and Rafe has an idea. They head to the loft. 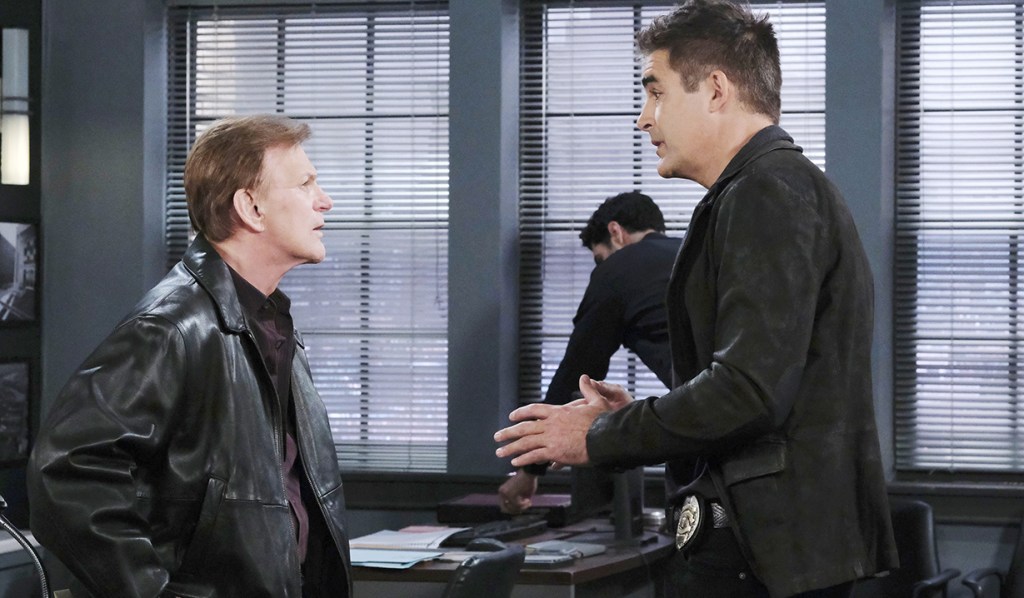 Xander arrives home and calls Victor to tell him that Brady and Kristen will be tested as possible donors but that Brady was too protective of Tate to allow it. Xander thinks Tate being Mackenzie’s half-brother would be a match. He goes to check on Sarah and knocks before entering. He finds Sarah and Eric putting their clothes on. “Oh,” he stammers. Eric leaves and Sarah tells him this isn’t what it looks like. Xander tells her to be with Eric, knowing that’s what she wants. Sarah says they didn’t have sex. In fact, she’s not in love with Eric. “I’m in love with you,” she states.

Roman and Rafe stand outside the loft and Roman takes a call from one of his contacts. Marlena’s passport was scanned at the airport. It looks like they need to go to Prague. Inside, Marlena tells “Steve” that they need to get out before Princess Gina returns. She hauls on the door but it’s locked. They talk about how that could have happened and Marlena refuses to believe her husband is dead. 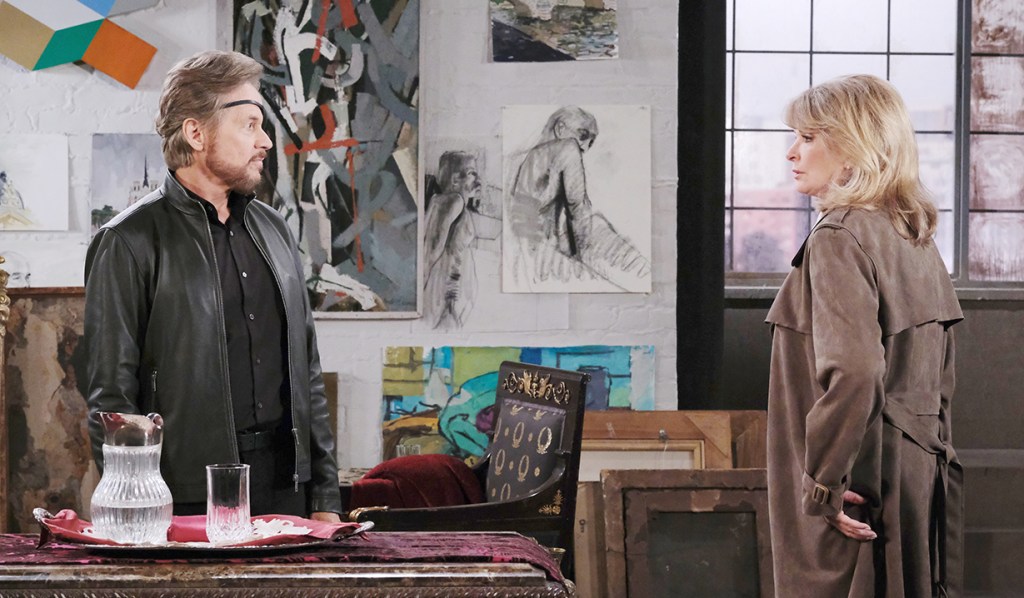 At the hospital, Nicole is tested. Brady says he is in the National Bone Marrow Registry still from when Chloe needed a transplant. Nic is upset that she hurt Eric over their faked affair and Brady urges her to go to him. Later, Kristen appears. He asks how she is. She’s holding up but they’re both thinking about Rachel. Brady thanks her for getting tested. He walks her home.

Outside the pub, Roman has cashed in frequent flier miles and got him and Rafe on the next flight to Prague. Roman worries when he can’t get a hold of Steve or John. 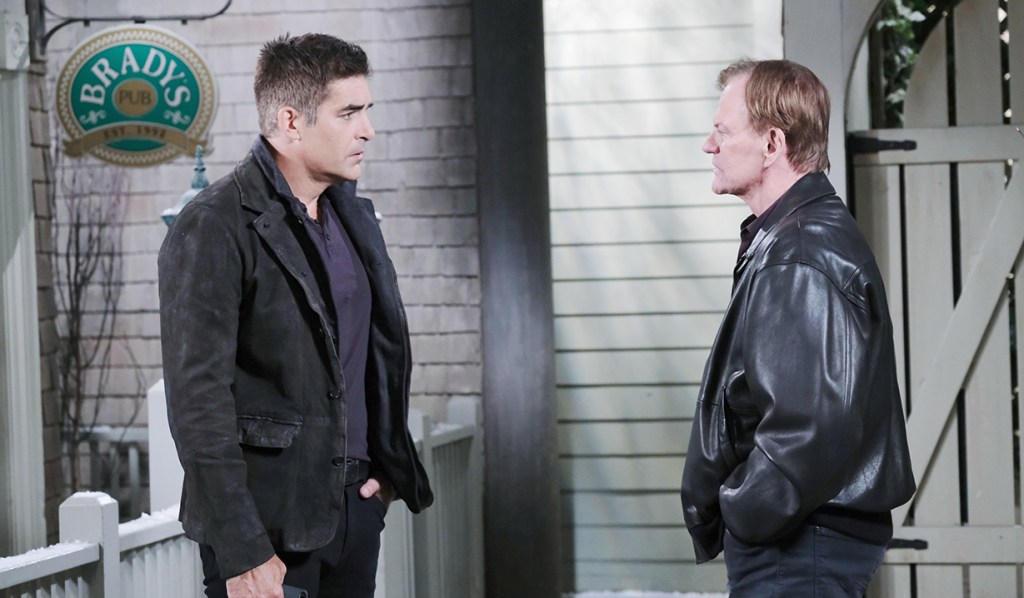 At Kristen’s, Brady wants to tell Kristen about him and Nicole.

Nicole finds Eric at the pub. She’s sorry he and Sarah aren’t a match for Mackenzie. She and Brady were tested. He thanks her. She admits she and Brady aren’t together and never were.

Sarah has a declaration.

Ciara is beside herself.

<p>Stefano feigns being Steve to Marlena at Princess Gina’s loft. Marlena’s still reeling from learning that Stefano killed John, not realizing that “Steve” is lying to her.</p>

<p>Roman, who used to be the police commissioner at Salem Police Department, is talking with Rafe Hernandez about Marlena going missing at Princess Gina’s hands. Rafe gets an idea…</p>

<p>As Chad and Abigail are looking at renovating the gatehouse once lived in by Ben and Ciara, they come across a portrait of Steve Johnson and wonder why it’s there. Who painted it?</p>

<p>Nicole and Brady talk to Xander about who should be tested as a match for Mackenzie who needs a bone marrow transplant. Brady finds Tate to be a longshot. </p>

<p>Xander walks in on Sarah and Eric. The two are putting on their clothing after we assume they’ve had sex in her bedroom at the Kiriakis mansion. But Sarah denies it.</p>

<p>Roman and Rafe discuss how they know Princess Gina has Marlena. They wonder if Marlena could be at Princess Gina’s loft since Rafe found a tiara there once and decide to head to Prague.</p>

<p>Princess Gina holds a sobbing John after she lied and told him Marlena was dead at Stefano’s hands. He tells her he doesn’t believe her.</p>

John Collapses in Grief After...

Ben & Ciara Are Heartsick After...