JJ Goes Ballistic on Kristen After Learning She Killed Haley

Friday January 24, 2020: On Days of our Lives today, as last Mother's Day continues, Sarah learns Adrienne's fate and Brady learns his daughter died, while in the present day, Ciara tells Will he's innocent. 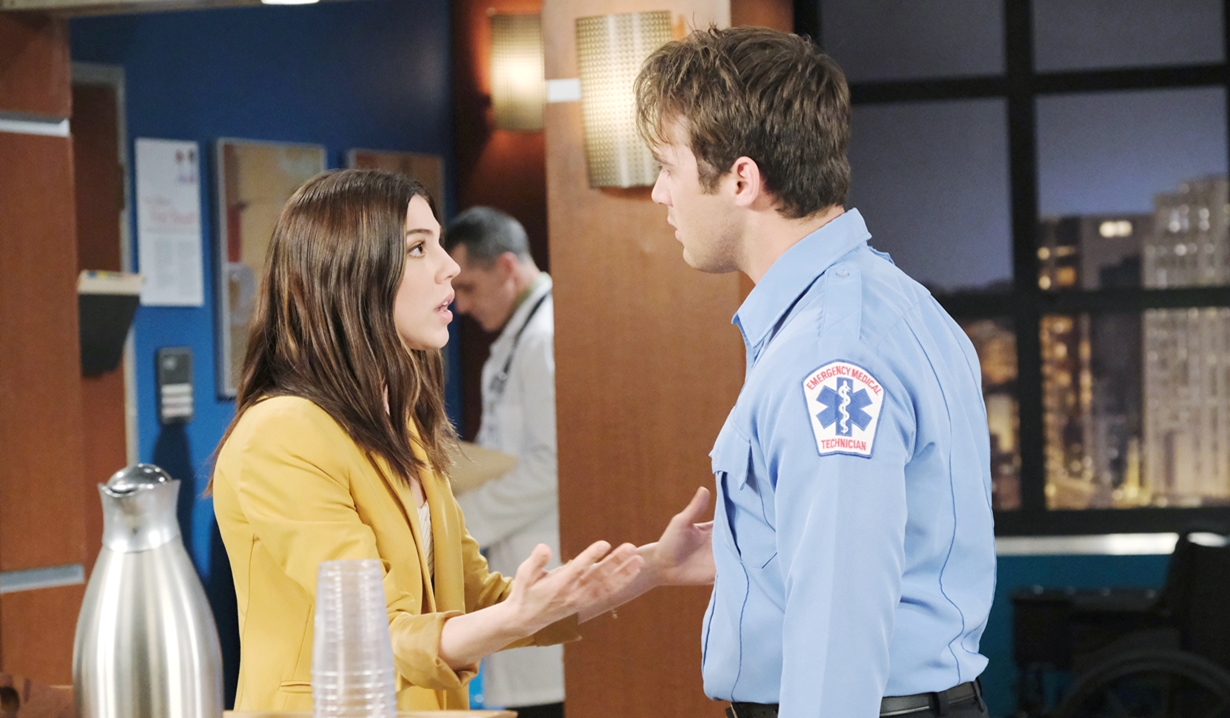 At the prison, Ciara tells Will he can’t sign the divorce papers. He already has – he and Sonny will never get past him killing her mother. Ciara replies he didn’t – she came to tell him he’s innocent.

In the hospital waiting area, Will tells Sonny he caused the accident – it’s his fault Adrienne is dead. He chokes out, “I killed your mother.” Sonny protests it’s not possible; he’s a good driver and Sarah said the car was black. Will counters his car’s dark gray and it was dark. Sonny learns he was distracted by his phone and levels, “My mom is dead because you were texting?!”

JJ joins Jack in Jennifer’s hospital room and breaks the news about Adrienne. Jack reels, “My little sister’s gone.” He worries how he’ll tell Jennifer when she awakens and stammers, “Someone has to tell Abigail.” JJ will find her.

In Adrienne’s hospital room, Justin tearfully asks his dead wife what he’s supposed to do without her. Kayla joins him and he recalls proposing to Adrienne. She embraces him as he must go check on Sonny and phone Alexander and the twins. Jack enters and Kayla’s so sorry. He tells Kayla, “This is impossible.” She assures him she left Steve a message, then exits. 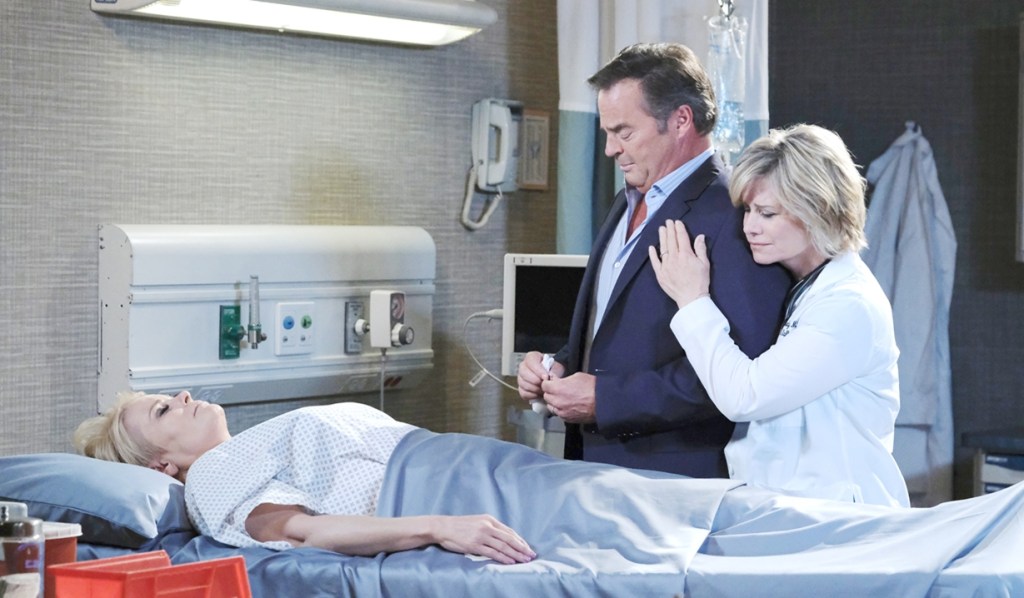 Xander hands Sarah the crying baby in her hospital bed and says, “She’s perfect.” Sarah agrees, and thanks him for delivering her precious angel, but notices she doesn’t look the way she remembers her from the birth. Xander grimaces slightly and thinks it’s natural she’s discombobulated. Rafe enters and relays Brady’s baby girl was born as well before asking about the accident. Sarah recounts what happened – she thought it was a black car, but they should probably ask Adrienne. Xander interjects, “I haven’t had a chance to tell her yet.” Sarah’s stunned Adrienne’s dead. Rafe exits and Xander assures her it’s not her fault. Sarah hopes Rafe finds who did it. Xander relays it was her cousin, Will. Sarah’s floored at the tragedy of it all. After, Xander asks about a name. Sarah reveals it will be Mackenzie, Mickey for short, after her adoptive father. Xander approves. She can’t wait to tell her mother.

Outside Kristen’s hospital room, Abigail arrives just as Haley’s landed at the bottom of the staircase and gasps, “Kristen, what did you do?!” She rushes to Haley, can’t get a pulse and hollers for help as Kristen walks away. 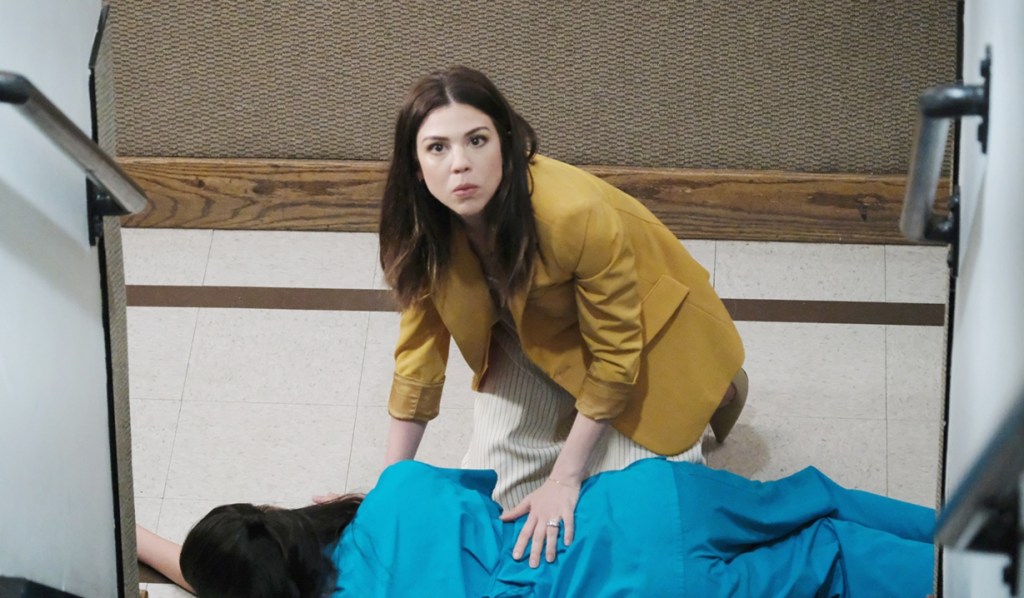 Brady finds Kristen in her hospital room and asks what’s wrong and where is the baby? She tells him, “Nurse Chen’s not coming, Brady.”

By the hub, JJ finds Abigail and is stunned when she says she’s so sorry about Haley, then explains she’s dead. In shock, he says they have plans. Abigail saw it – she describes the scene she came upon and JJ takes off.

As Brady’s asking Kristen if the baby’s okay, JJ bursts into the room and shouts, “You crazy bitch! What have you done?” Brady holds him off as he relays Kristen pushed Haley down the stairs. She’s dead and the police are on the way. JJ hisses Kristen will pay, then goes. Brady, shell-shocked, listens as Kristen confirms she got upset at Nurse Chen, who told her their baby is dead. Brady thinks it has to be a mistake and goes to find out. He returns holding a baby – they have to say goodbye. Kristen weeps. Rafe enters and Brady makes him leave. Brady and Kristen cry together.

In the waiting area, Sonny is screaming hysterically at Will that his mother’s dead because he was too busy to contact his mother on Mother’s Day earlier as Justin appears and hollers, “What’s going on?” Will tells Sonny he has to know. He assures Justin how much he loved Adrienne then confesses to causing the crash. Will shares the conversation he had with Adrienne at the scene. Justin yells, “The love of my life is dead…because of you!” Will wishes it were him.

At the hub, Kayla’s told Abigail about Adrienne. JJ appears and asks to see Haley.

In Adrienne’s room, Abigail supports her devastated father, Jack as he kneels at the bedside. 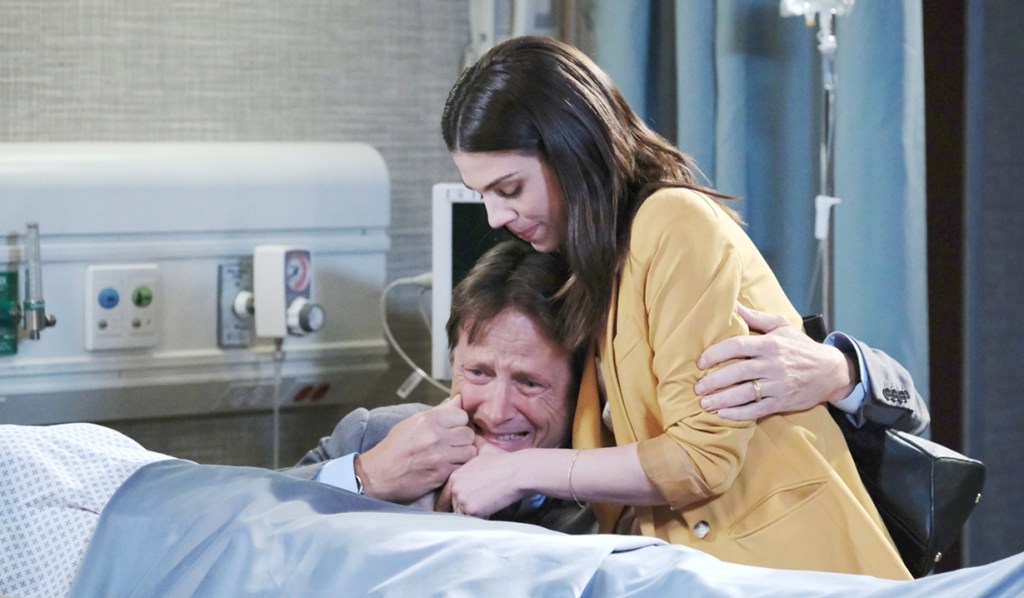 In a darkened room, Kayla leaves JJ with Haley’s body. He cries, “My beautiful girl. You can’t leave me this way.” She made him believe in love again; tonight was going to be the start of their life together. He pulls out the engagement ring and sobs while lying next to Haley.

In the waiting area, Justin and Sonny come upon Will, who is giving his statement about the accident to Rafe. 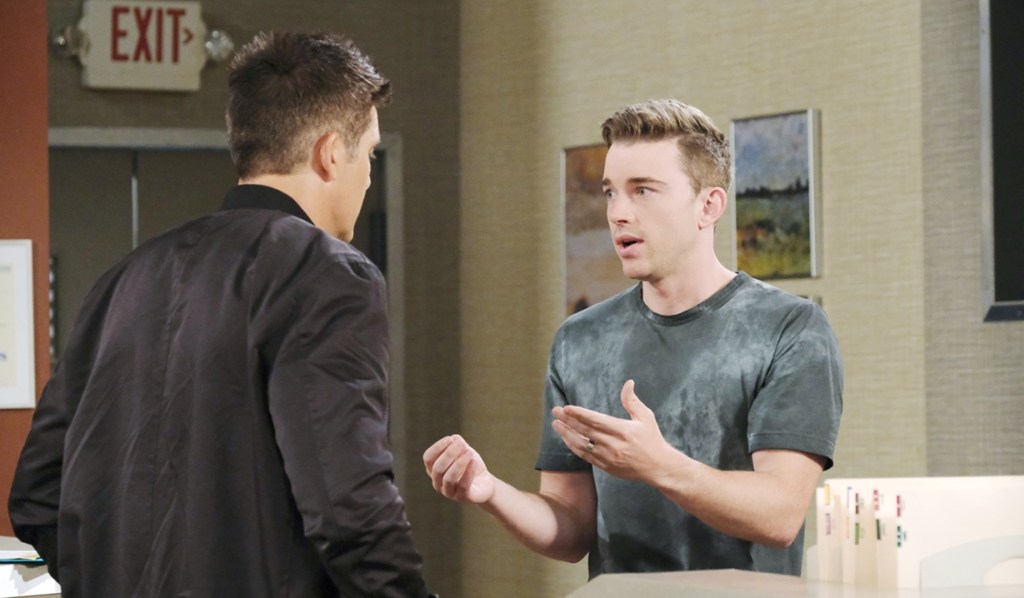 In the prison, Will is stunned that Ciara’s claiming Maggie is the one who ran Adrienne off the road. Ciara replies, “Now you know the truth, and everyone else needs to know it too.”

Will and Ciara debate revealing the truth. 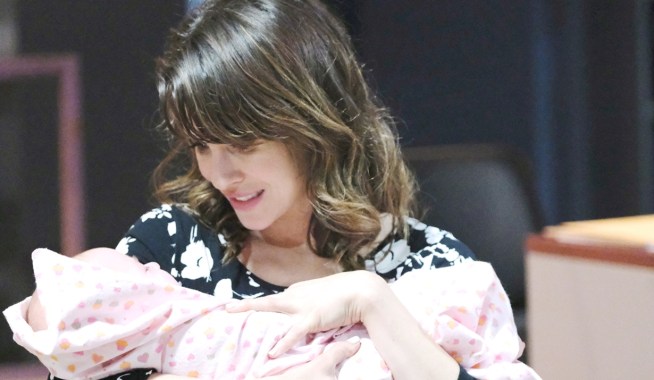 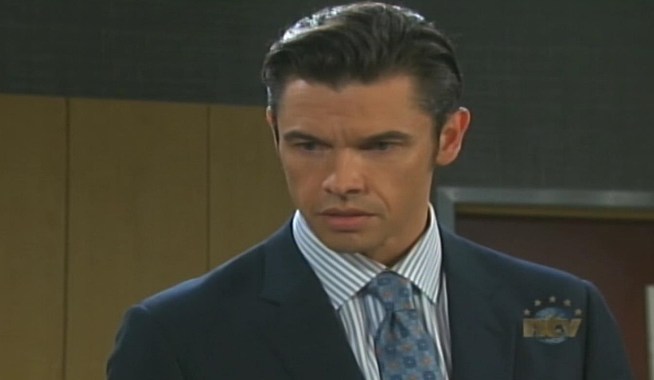