Ciara Tells Will He’s Innocent, That He Didn’t Kill Adrienne

Friday January 17, 2020: On Days of our Lives today, Sarah and Eric return to Salem, Maggie nags Victor to tell her why he sent an urgent text to Ciara, Brady tries to make Kristen see that he's over her, and Sonny wants answers. 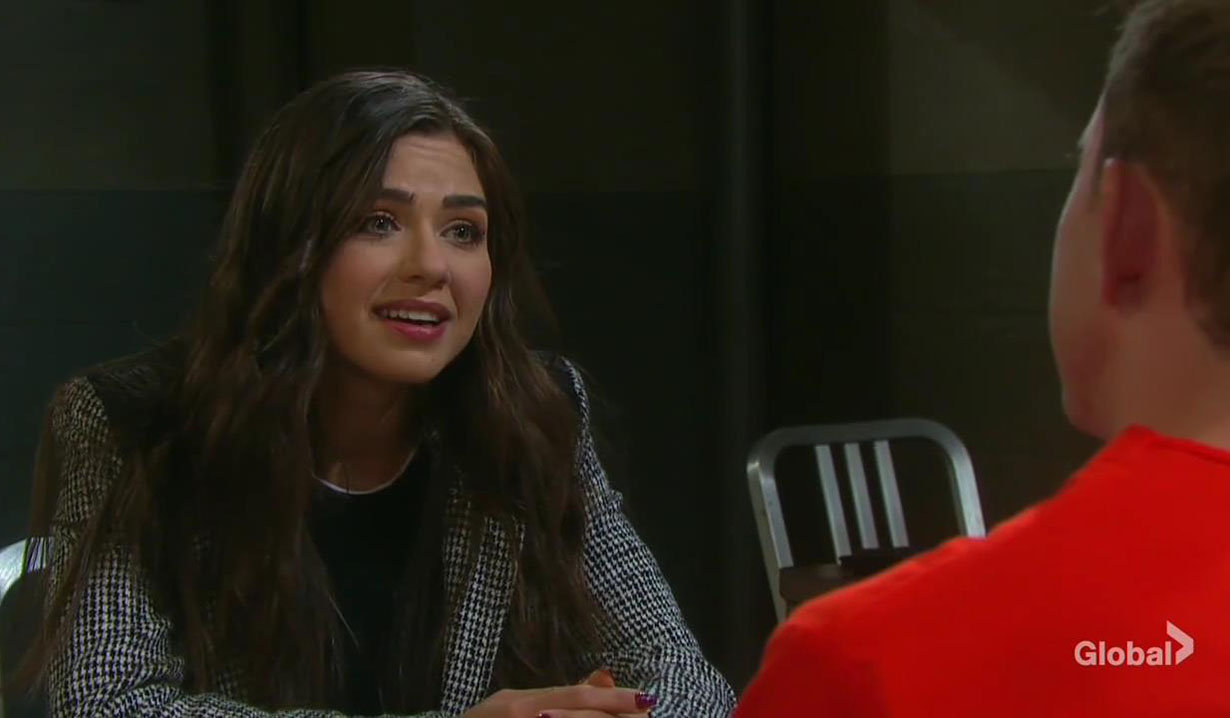 In the hospital, hand on hip, Maggie wants to know what Vic’s urgent text to Ciara was about. By the hub, Sonny tells Justin and Kayla that Victor’s grumpy. Kayla goes to see him and Justin cringes as he hands Sonny divorce papers from Will. Sonny digests that. He didn’t expect it to happen so fast. Back in Vic’s room, Maggie continues to harp at Victor. He tells her not to nag and she yells, “I am not nagging you. I’m just trying to keep you from having another stroke!”

At home, Ciara flashes to learning who really killed Adrienne. Xander appears and asks if she’s going to keep her mouth shut about their confession. Ciara asks how she can when Will’s in prison for a crime he didn’t commit. Xander demands she drop it or lives will be destroyed. Sarah interrupts with Mickey and Ciara runs away while Sarah and Xander catch up.

Will is shocked to see Adrienne visiting him at the prison. He gasps. Rolf brought her back. Adrienne asks why he killed her. He didn’t mean to. She laments that she and Justin were happy but he destroyed everything. Will wakes up gasping. He dresses and is visited by Sonny holding divorce papers. He asks if this is truly what Will wants. Will’s eyes fill as he grabs the papers and signs. Sonny won’t sign. Will urges him to and yells that nothing will change his mind. Sonny’s taken aback so signs.

Brady appears in Kristen’s office at Basic Black. She tries to get Nicole out of the company but Brady asks why he’d want to do that. “I love her,” he says. Kristen sniffs. “There’s no way you’re going to settle for a dishrag like her when you can have me.” Brady attempts to ignore her as she reminds him of how good they were together. He tries to fight his feelings. 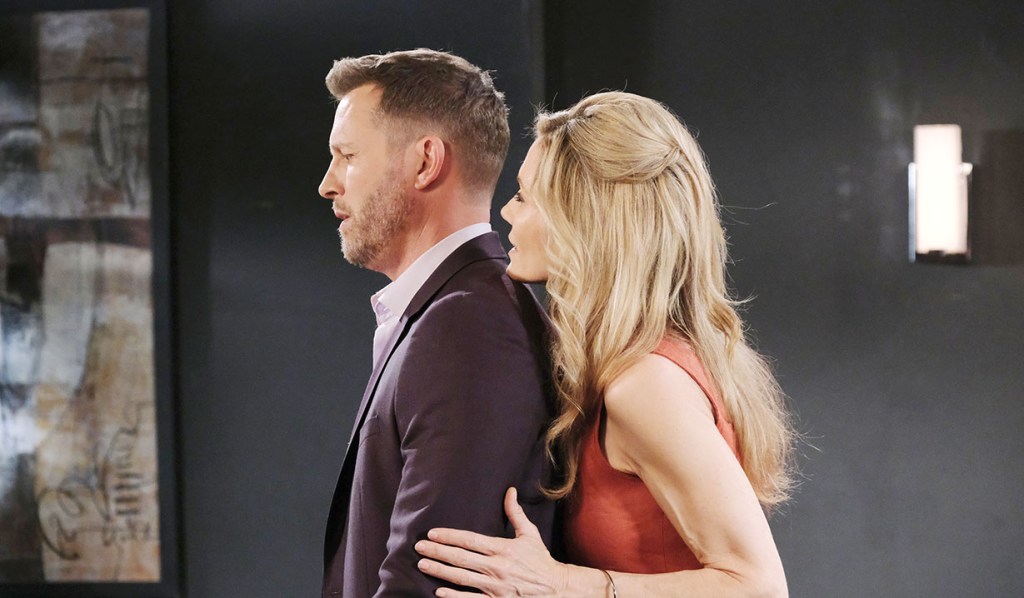 More: Days alum passes on at 95

Eric arrives home to Nicole. It’s awkward. He looks her up and down and tells her he’s back for good. Mackenzie’s tolerating chemo well so far. They’re home for final treatments. Nicole is glad to hear it. She assumes he wants her to move out but he lets her stay since he’s got the room above the pub. He asks after Holly and learns she’s reading and learning to add. He looks at a dollhouse he sent her and Nicole relays that she loved it. Nic heads to work, heartbroken.

Ciara arrives at the hospital and tells Justin that Xander and Victor had nothing to do with Jordan’s murder. He’s surprised she changed her tune. In Kayla’s office, she greets Eric and Sarah. Their oncologist calls and tells Kayla the treatment isn’t working. Their best hope is a bone marrow transplant. Sarah cries. In Victor’s room, he and Maggie talk about Mackenzie’s cancer. They hope she’ll be fine. She goes and runs into Justin who tells her Will and Sonny may be signing divorce papers now. Ciara looks shaken up. Justin and Maggie’s hearts are broken for them. They hug and Justin hugs Ciara. Everyone separates. In Vic’s room, Xander relays news that Ciara refused to keep their secret. If she tells their secret, “All hell’s gonna break loose,” Xander says. Later, Maggie finds Sarah in Kayla’s office alone. They hug as Sarah cries.

At Basic Black, Brady and Kristen almost share a kiss when Nicole arrives. Brady kisses her passionately and shocks Nicole as he shoves her against the wall and throws her on the desk. They go at it until Kristen blows her lid and demands Nicole get her hands off of him. Nicole asks what “the bitch” will do about it. Brady sends Nicole off so he can deal with Kristen. Kristen knows he’s using Nicole to push her away. She touches him again and brings up their emotional connection. She shows him the bracelet he gave her the day their baby was born. They never discussed their loss and she thinks it’s time. 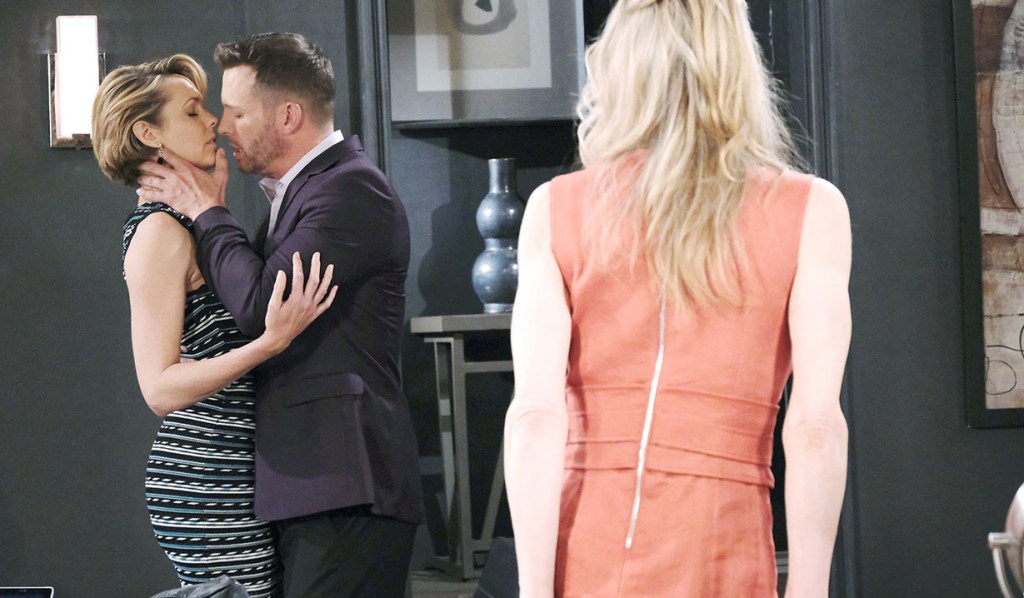 Eric and Mickey run into Nicole at the pub. Nicole fawns over the baby and notices Eric looks about to cry. He tells her the chemo’s not working. Nicole tears up. She’s so sorry. He’s trying to hold it together so she hugs him.

At the park, Justin hugs Sonny, who tells his dad his marriage is officially over.

Ciara drops by the prison and tells Will that he’s innocent. “You did not kill Adrienne,” she says.

Sonny and Justin revisit the day they lost Adrienne. 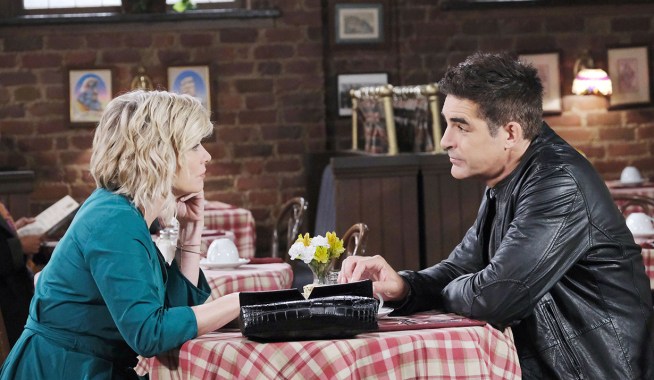 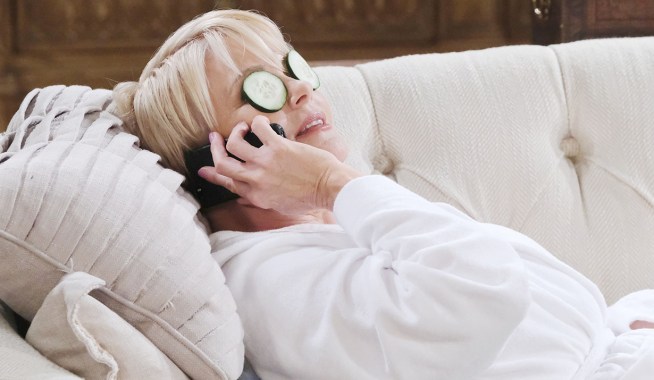