Stevano and Gina Agree That John and Marlena Must Die

Wednesday January 15, 2020: On Days of our Lives today, Princess Gina and Stefano come up with a plan to get what they want, Rafe is happy to hear his sister's news, and JJ comes up with an idea on how to get Gabi's cell phone in order to disable the pacemaker app. 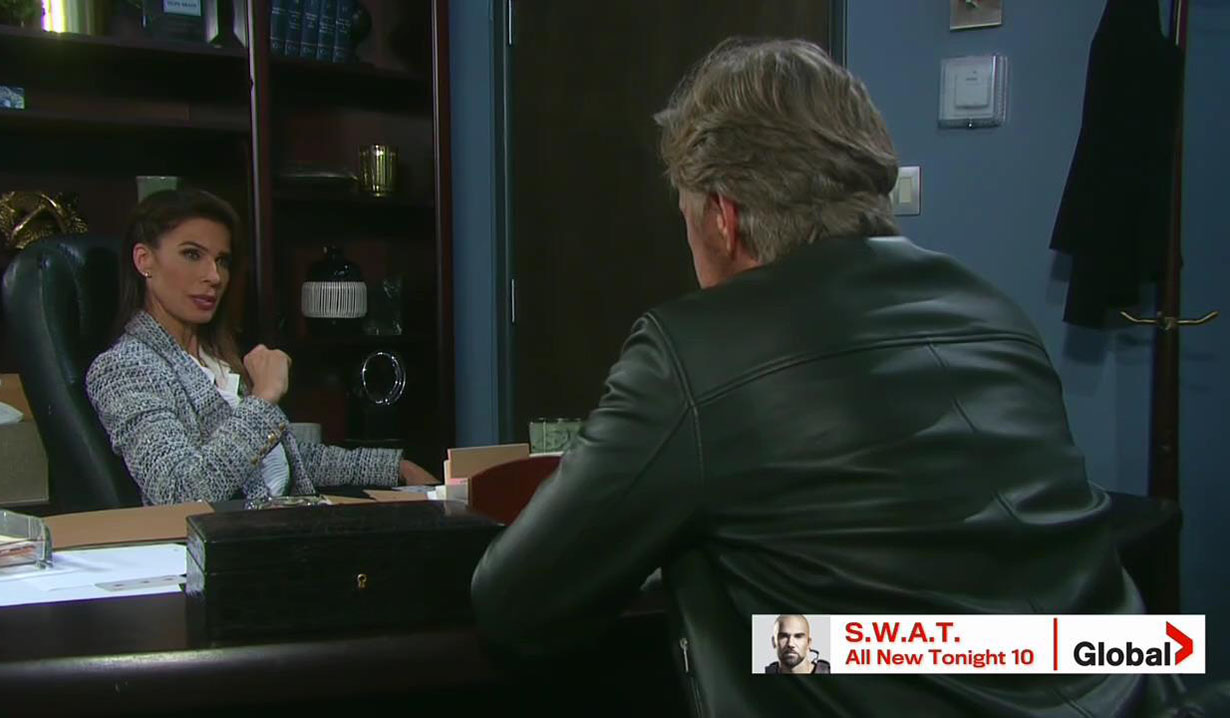 “Steve” arrives at SPD. He tells Rafe Hope contacted him to help track Stefano around. Rafe notes that they were the last two people to see him alive. He thinks the old guy is getting sloppy. Returning to town means he’s losing his edge. Stevano laughs. Maybe it’s time to let the big boys take a shot at him. He goes to Hope’s office. He just saw her boyfriend. Gina snipes that Rafe’s not her boyfriend. She’s smoking and playing “American cards” because she’s bored out of her mind. Stefano puts out the cigarette, reminding her she “gave up that filthy habit.” She cries that she’s stressed. She uses air freshener and tells him in order to get John she’ll have to kill his beloved Marlena. Stefano barks out a laugh. He’ll kill her if she tries. Gina laughs but needs his help. Stefano knows. He spoke with Kristen yesterday and she is already covering for them so they can devise a new plan. Stefano has a plan. The best scenario is for both John and Marlena to die. Gina calls him mad but he explains. She finds it brilliant.

In the DiMera living room, Gabi and sees Eli making out with Lani in her nun’s habit. Gabi screams and asks what’s going on. Eli’s still hot for Lani. He can’t help it. “She looks so good in that habit,” he says, licking his lips. Gabi wakes up alone wondering where Eli is. She dresses and heads into the living room and finds a note from Eli. 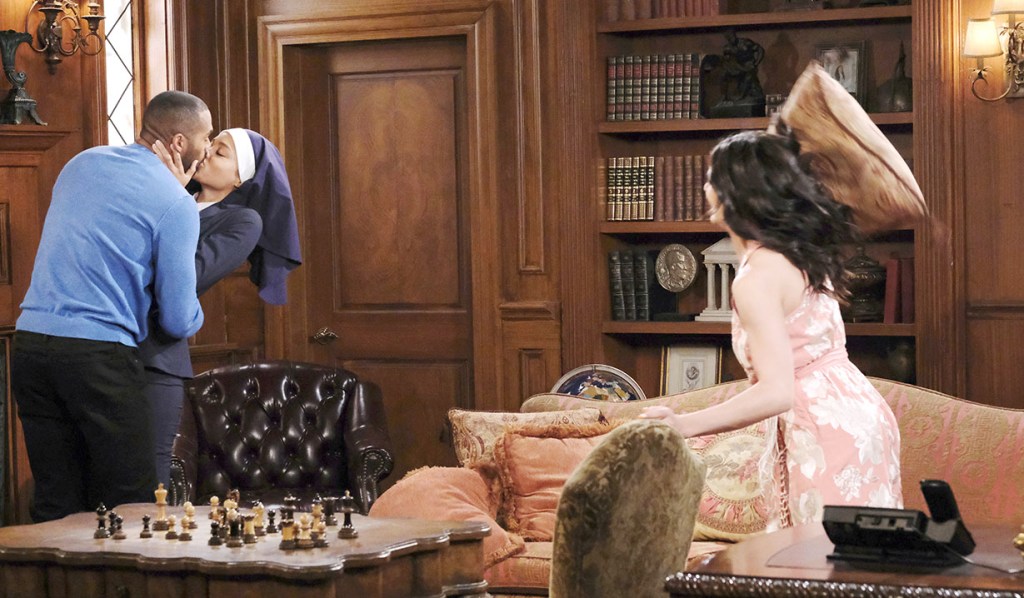 Abe smiles when he sees Eli in the square looking at Gabi’s engagement ring. Eli says he’s proposed to Gabi without a ring. Abe is reminded that he did the same with Lani. Eli doesn’t think history will repeat itself. Eli was hoping Lani would explain why she dumped him when she was in town. Abe’s shocked. He didn’t know she was there. Eli says she’s gone and fills him in on her shattering Gabi’s storefront window. Abe’s puzzled. He asks where she is and learns she might be at the convent. Again Abe’s shocked. He’s been in the dark. He will call her. 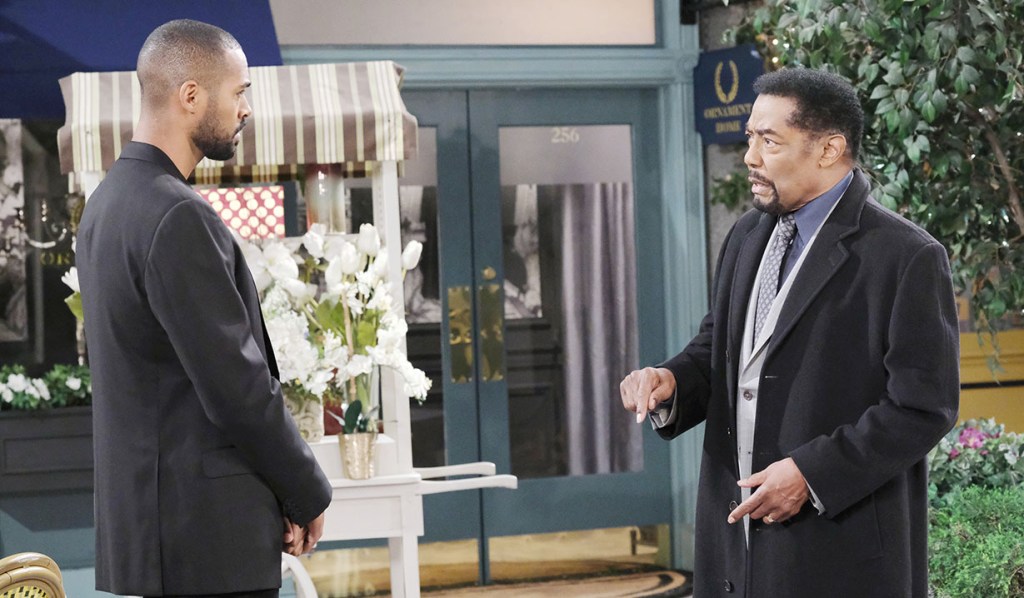 At JJ’s, JJ and Lani haven’t had much sleep. JJ needs to stop Gabi. Lani is worried she’ll kill Julie and can’t risk that. JJ needs to take action but learns they can’t even tamper with the pacemaker or Gabi will get notified on her app. JJ has a plan. Lani ignores Abe’s call and JJ says he can become friendly with Gabi and try to disable the app. It’d be a start, then they can disable the whole system. Lani thinks Kristen will help which stuns JJ. He says no and leaves. Lani calls Kristen with an update.

Marlena wakes up at the townhouse after a nightmare that Stefano has kidnapped her. John comforts her. She explains he took her dancing and wore a mask. John says he and Steve won’t let Stefano near her. He makes her breakfast in bed and she giggles. John dropped by his hideout last night and found a cigar butt. Hope was there and said she doesn’t think Stefano’s still in town. They both say Hope apologized for hitting on John. Marlena doesn’t see any sincerity but agrees to give her another chance. Gina and Steve arrive. 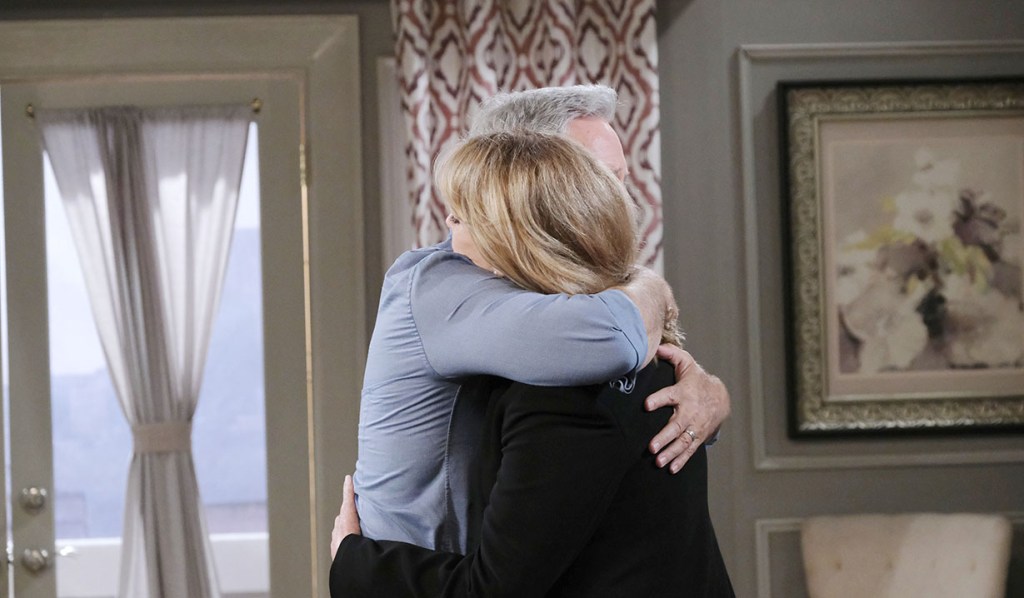 Kayla finds Julie in a room at University Hospital. Doug made her promise to see Kayla. He’s worried about her since her heart transplant. As Kayla examines Julie’s heart, they talk about Steve’s return. Julie and Doug think Hope has changed. Bringing Steve back like this wasn’t considerate of Kayla’s feelings. Kayla talks about Steve being in love with another woman. Julie snorts and thinks Kayla should commit to Justin. Kay says it’s too soon and looks at the paper from the EKG strip which looks off to her.

Rafe arrives at the DiMera mansion. Gabi relays she and Eli are engaged. Rafe’s thrilled and they embrace. He agrees happily to walk her down the aisle. Talk turns to Ari. She knows she hasn’t been a perfect mother. Rafe knows she’s doing the best she can. A test for her pacemaker app comes in and Rafe sees it. He questions her. She grabs the phone and covers. Eli arrives and Rafe congratulates him on his engagement. Eli asks him to be his best man but he’ll be walking Gabs down the aisle. Eli will find someone else. Rafe goes and Eli gets on bended knee and gives Gabi her diamond ring. She calls it beautiful and kisses him. 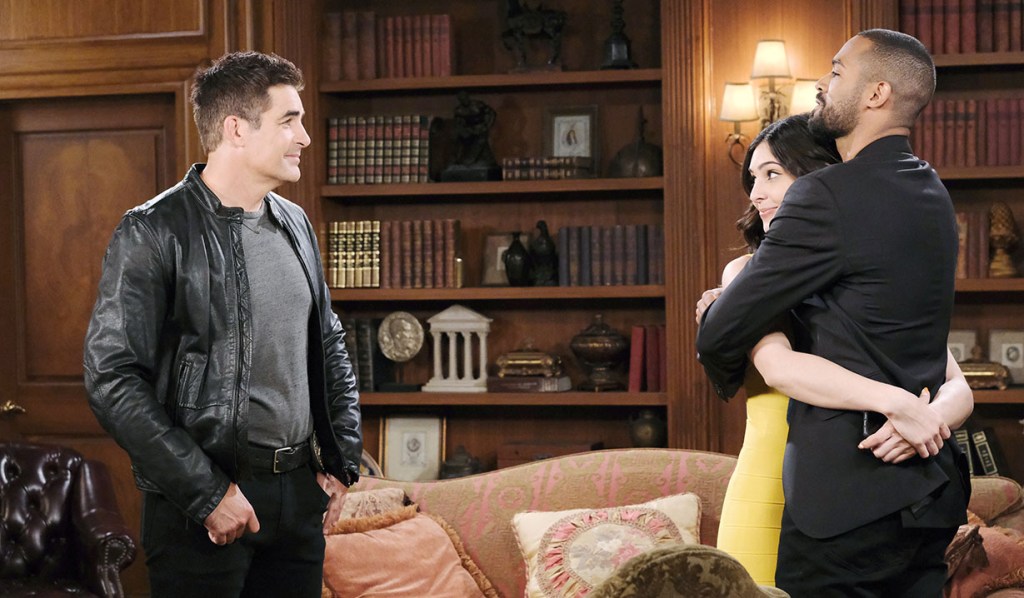 At the square, Abe tells Rafe about the cigar butt John found at the loft. Rafe’s astounded. There wasn’t one there which means Hope’s throwing him under the bus. He needs to know why. He calls Lani again and questions her about everything. She admits she was there and she is a nun but refuses to say more. Abe’s worried.

JJ arrives at the mansion and learns that Eli and Gabi are engaged. “You can’t do that man,” he says.

Rafe goes into Hope’s office at SPD and smells smoke. He locks the door and snoops, finding cigarettes, shocked.

<p>On Days of our Lives Wednesday, Gabi has a nightmare that Eli has turned to Lani. He’s making out with her when she throws a pillow at them.</p>

<p>Gabi’s nightmare has Eli and Lani reuniting. Gabi watches them hug and kiss and has a meltdown. </p>

<p>Gabi awakens. She’s startled and disturbed from her nightmare that Eli wants Lani, not her.</p>

<p>Kayla does some tests on Julie at the hospital. Julie gives Kayla some bold advice about her love life and then Kayla finds something interesting on the EKG.</p>

<p>At the Horton Square, Eli looks at a ring he plans on giving to Gabi. They were engaged on Tuesday January 14 at Julie’s Place but he didn’t have the ring at that point.</p>

<p>Eli and Abe bump into each other at the Horton Square. They discuss Lani’s whereabouts and Eli’s stunned to learn what’s going on.</p>

<p>Rafe stops by DiMera mansion. Gabi and Eli fill Rafe in on their engagement news. Rafe’s happy for his sister.</p>

<p>Eli gets on bended knee again and slides a big diamond ring on Gabi’s finger. Gabi’s emotional as she once again says yes to marriage.</p>

<p>At JJ’s place, he and Lani discuss what Gabi did to Lani. JJ wants something done about this and comes up with a plan.</p>

<p>Princess Gina and Stefano decide that they have to kill John and Marlena. This is in order to get what they want.</p>

<p>At the townhouse, John and Marlena hug each other. They’re alone for the time being with Stevano not in the home.</p>

Eli Proposes Marriage to Gabi and...