Ben Loses His Last Appeal, Devastating Both Him and Ciara

Friday January 10, 2020: On Days of our Lives today, Kayla is still stunned by Steve's behavior, and Victor wakes up after surgery. 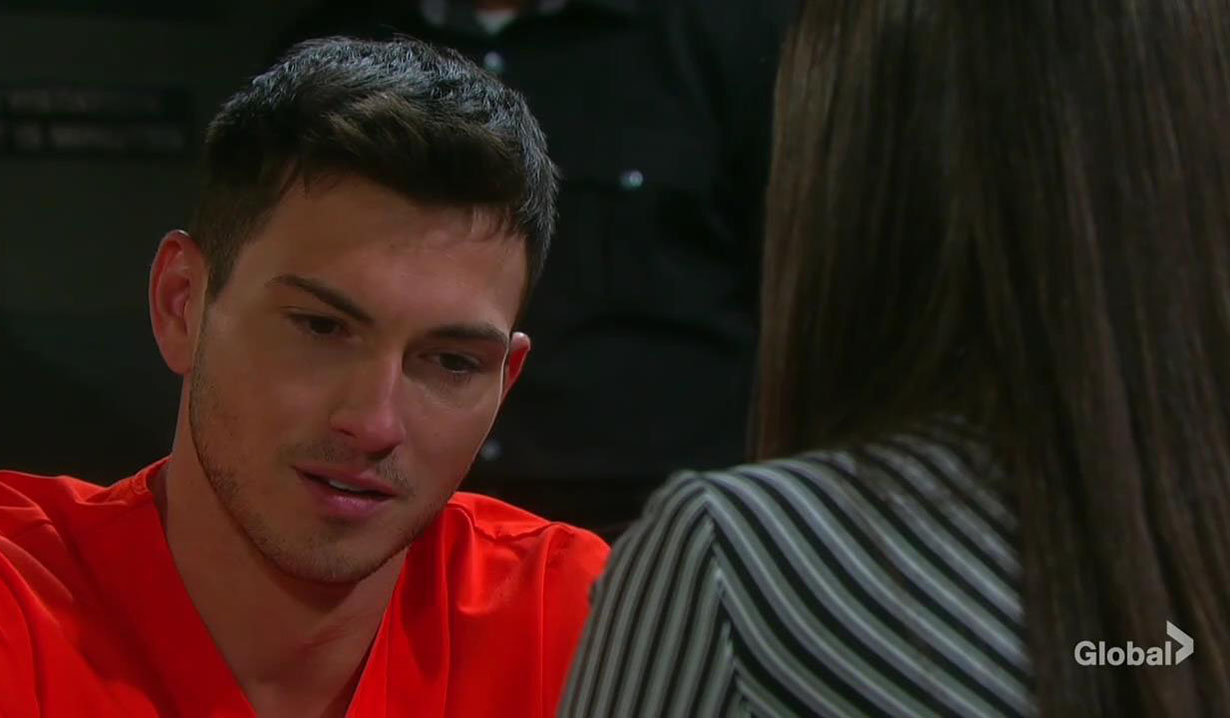 Marlena finds Kayla without her appetite at the pub. She tells Marlena that Victor pulled through surgery like a champ and his prognosis is excellent. But she’s thinking of Steve and tells Marlena about Jack’s argument with Steve. Marlena learns that Steve’s changed. “He’s cold, almost cruel.” Marlena wonders if he wasn’t aware of his words. Maybe he’s laser-focused on his mission of finding Stefano and Rolf. Kayla cries that Justin’s been a wonder. She beats herself up for her inability to let go of Steve and shakes her head over his behavior. Marlena is sorry. Kayla asks why Hope brought him back. That beats Marlena. She doesn’t know why Hope does anything anymore. She reveals Hope’s been making passes at John. Kayla tries to understand Hope, knowing she’s had a rough go of it lately. Marlena asks if she’s excusing her behavior but Kay’s not.

Kristen’s shocked and annoyed to find Steve Johnson on her doorstep at Salem Inn. He says he’s there because of her father. He asks if she’s seen him. She hasn’t and bitches that he hasn’t made an effort to see her, yet he’s communicated with Chad and wants her stock. Stevano is sensing anger issues and hopes to convince her to help catch him. Kristen scoffs and calls her father a great man. There’s no way in hell she’d work with Steve to expose him. They talk about her wanting Brady back and she tries to commiserate though he admits Kayla being with Justin doesn’t bother him as much as everyone assumes. Kristen doesn’t get it. He’s happy for Kayla. Kristen will only be happy if Brady’s with her. Stevano brings the conversation back to Stefano and assumes her father loves her. She complains of the silence and Stevano raises his voice. Maybe he had his reasons for not contacting her. Kristen starts to cry as her frustration grows about her father ignoring her so Stefano confesses that he is her father. Kristen yells at him to get out but he yells that he’s Stefano DiMera, and rips off his eye patch. Kristen starts to weep. 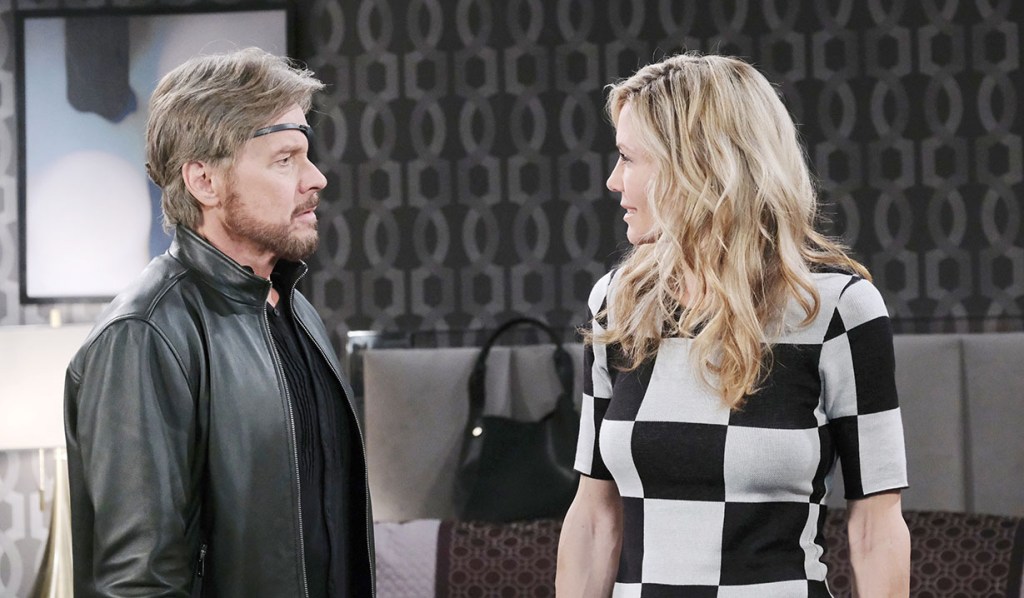 Princess Gina sneaks into her loft under the crime tape. She calls Stefano’s name and finds John who asks why she expected to find Stefano there. She saw the lock on the door was tampered with and took a chance. John holds up a half-smoked cigar and calls it proof he was there. “Hope” complains about him breaking in. He’s sorry but wanted answers. He asks how she tracked Steve down. She asks if it’s a problem. Is he accusing her of something? He says no but talks about how Steve’s a different man. He’s cool and nasty to everyone but Marlena. “Hope” shrugs. She and Steve both want the same thing. She again apologizes for thinking he was into her. John feels bad. “Hope” is worried she’ll lose their friendship since he’s being so distant. John knows their friendship will survive.

At the hospital, Victor has woken up and Xander tells him surgery went well. He convinced Maggie to go home and rest and while he knows Victor needs his rest, they need to discuss Ciara. He asks what went down before his stroke and learns that Ciara accused them of setting Ben up. Justin finds Ciara praying in the chapel and interrupts to tell her Ben’s appeal didn’t go through. Justin appears in Vic’s room, having overheard Victor and asks if Ciara was right. Xander barks that Victor needs rest and calls Ciara delusional. They had nothing to do with Jordan’s death. Justin’s truly sorry for his uncle’s stroke but isn’t convinced by Xander’s words. He defends Ben but explains that the ruling just came in. 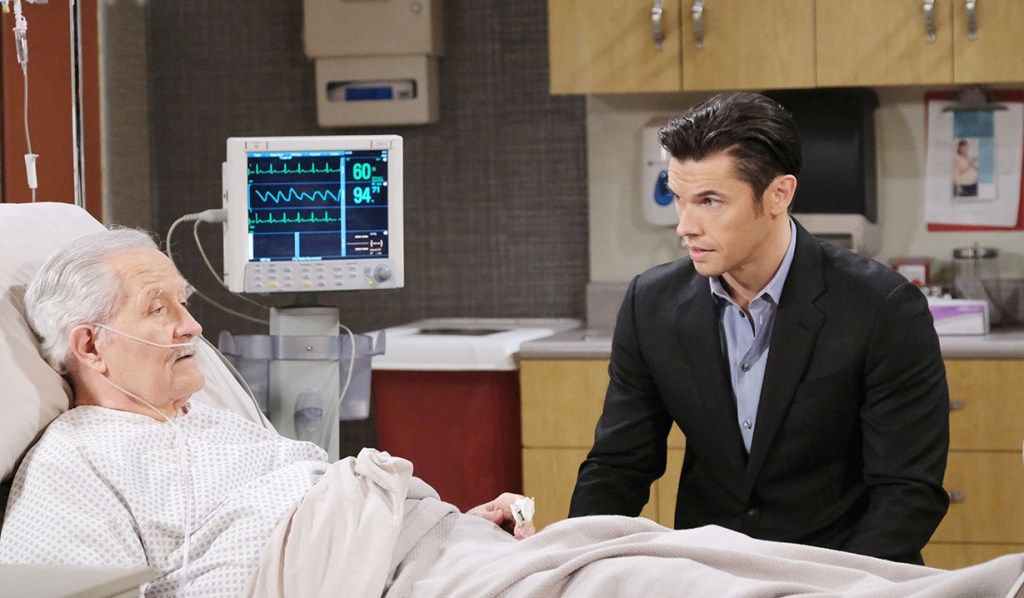 At the prison, Ciara’s sorry that they didn’t overturn Ben’s conviction. Ben’s not surprised but breathes heavily, trying to come to terms with the news. He blinks away tears and Ciara breaks down. She tried to be strong for him. What do they do now? Devastated, Ben says she needs to go and forget about him and never to return. Ciara hugs him, sobbing and the guard tells her to step back. Ben explains he’s lost his last appeal so if the guard touches her, he has nothing left to lose. Ciara vows to get to the bottom of this. She goes and Clyde appears, sorry to hear the news. He suggests Ben finally let his old man help him. He wants to bust them both out of prison.

Ciara returns to the hospital to talk to Victor but Xander plays guard dog and refuses. Ciara doesn’t take orders from him. Victor calls Ciara’s name. She tells him she loves him but begs him to come clean about setting Ben up for murder. If he doesn’t, she’ll tell Maggie everything she suspects. Victor turns to Xander. “We have to tell her the truth.”

John drinks beer at the pub, which makes Marlena smile. It’s better than him drinking wine with Hope. John doesn’t want to discuss Hope. He toasts his wife.

Clyde has a shocking suggestion for Ben.