Tuesday January 7, 2020: On Days of our Lives today, Gabi again orders Lani out of Salem, Julie and Maggie give JJ support, and Xander leans on Ciara for Victor winding up in the hospital. 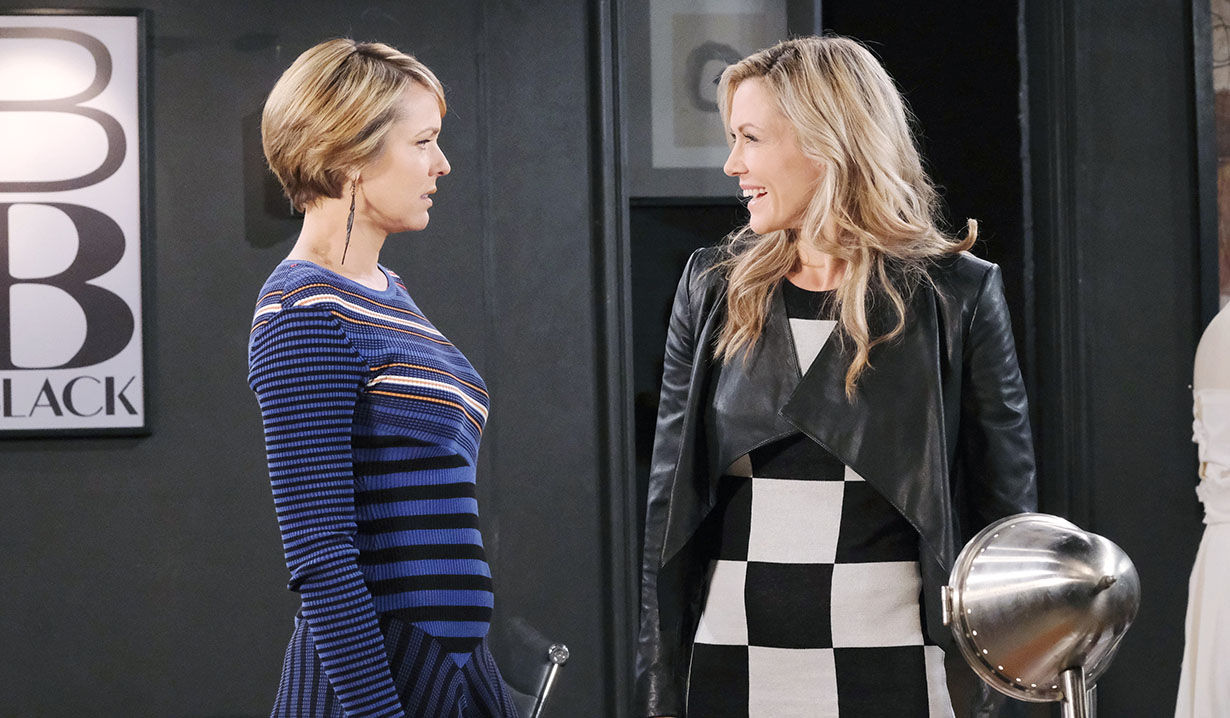 At the hospital, Xander asks what Ciara did to Victor. She won’t defend herself to “a lowlife like you.” Xander snipes that if Victor dies it’ll be on her hands. Kayla appears. Victor’s still in the ER. He had a dose of TPA but the clot is large. He may need brain surgery. Xander’s pissed to learn Ciara hasn’t called Maggie yet.

At Salem Inn, Lani thinks of Eli. Gabi calls and orders Lani to get her ass out of 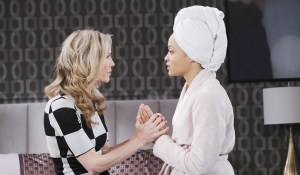 Salem or she’ll send Julie, “that bitch, straight back to hell.” They disconnect and Lani complains to Kristen who suggests she not leave town but lie low for a while.

At the Horton house, Julie tells JJ that Julie’s Place was vandalized by “you know who.” JJ asks, “Freddy Krueger?” Julie says no. “Worse, Kristen DiMera.” JJ rubs his arm and remembers almost shooting Kristen. Julie blames the drugs. Maggie arrives, glad to see JJ looking like his old self. She came to support him since his last meeting didn’t go so well. They agree to go to another – without Brady. Maggie talks about her own slip. If he needs a friend, she’ll be it. They hug. Maggie gets a call from Xander who tells her about Victor’s stroke. Maggie’s jaw quivers and she tears up.

At Basic Black, Brady guzzles water and flashes to Kristen as Nicole tries to 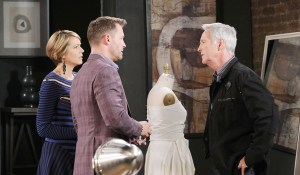 talk business. Nic can see his mind is on Kristen and laughs about Kristen whipping off the nun’s habit to show her landmark red dress. John arrives with the news of Victor’s stroke. Brady asks why he’s telling him. He’s still sore that Victor fired him after he lost his baby. John says this is bad and Brady should at least be there for Maggie. Brady agrees and goes while Nicole fills him in on Kristen’s return. John’s grateful Nicole and Brady are friends again but is worried she’s on the rebound from Eric. Nic says they’re just close friends.

More: Behind-the-scenes of a soap set

At the DiMera mansion, Gabi and Eli discuss Kristen throwing the 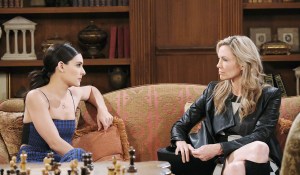 planter through her storefront window. Kristen arrives. She didn’t throw the plant. Lani did. When Eli rushes off to talk to Lani, Kristen taunts Gabi about him missing his ex. Kristen’s willing to discuss her shares. Later, Gabi refuses to do something for Kristen, sniping that she can stick it.

Eli pounds on Lani’s door at Salem Inn. In the habit, Lani answers. Eli rants about her being the one to break the window. 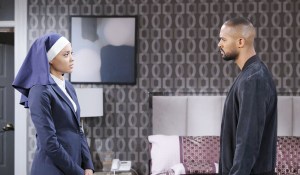 Gabi’s done nothing to her so why did she do it? Lani freaks and yells that he has no idea what Gabi has done. Eli again asks what she’s done. Lani tells Eli about Gabi forcing her to get on her knees and beg her to give Stefan’s heart to Julie. “And I did it,” Lani cries. Eli knows Gabi was filled with grief. She probably didn’t know what she was saying. Lani doesn’t believe that. She says she’s leaving town and tells him to go live his life and she’ll live hers. She shows him the door.

Maggie rushes into Xander’s arms at the hospital, sobbing. 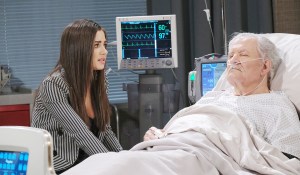 In Victor’s room, Ciara cries and apologizes to her grandpa. She’s worried about him but loves Ben too. Maggie appears and holds Victor’s hand as she whispers words of love. Xander tells Victor to hang in there and takes Ciara out of the room where he grabs her and yells at her. Brady arrives and yells at Xander and takes Ciara aside so she can update him on the blood clot. They commiserate over how Victor pushes them away. In Victor’s room, Maggie begs her husband to be stubborn and fight this. She begs and sobs at him not to leave her. Xander appears with a handkerchief. 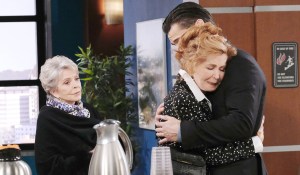 She’s surprised. She didn’t think he was the type to carry those around. Xander says Victor taught him a few things. Xander stays with Vic, promising that nobody will ever find out what they did. He’ll make sure of it. Later, Vic is wheeled out and everyone says a tearful goodbye as he heads into surgery.

Julie and JJ walk in the park and run into Lani in a nun’s habit. “Well, if it isn’t The Flying Nun.” 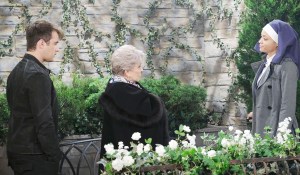 Julie goes to get coffee while JJ thanks her for talking him down from killing Kristen. He wishes he could repay Lani.

Kristen saunters into Basic Black. She tells Nicole she works there now and asks Nic to welcome her to the company.

Eli returns home. He tells Gabi that Lani claims she broke the window because of something Gabi made her do. “That bitch is lying,” Gabi says.

Kate has a warning for Will.

Victor Has a Stroke When Ciara...