Kristen Assaults Nicole When Brady Refuses to Take Her Back

Thursday January 02, 2020: On Days of our Lives today, Kayla wants to know why Steve's back in town, Princess Gina makes up a lie as to why she contacted Steve, and Gabi and Lani have a confrontation. 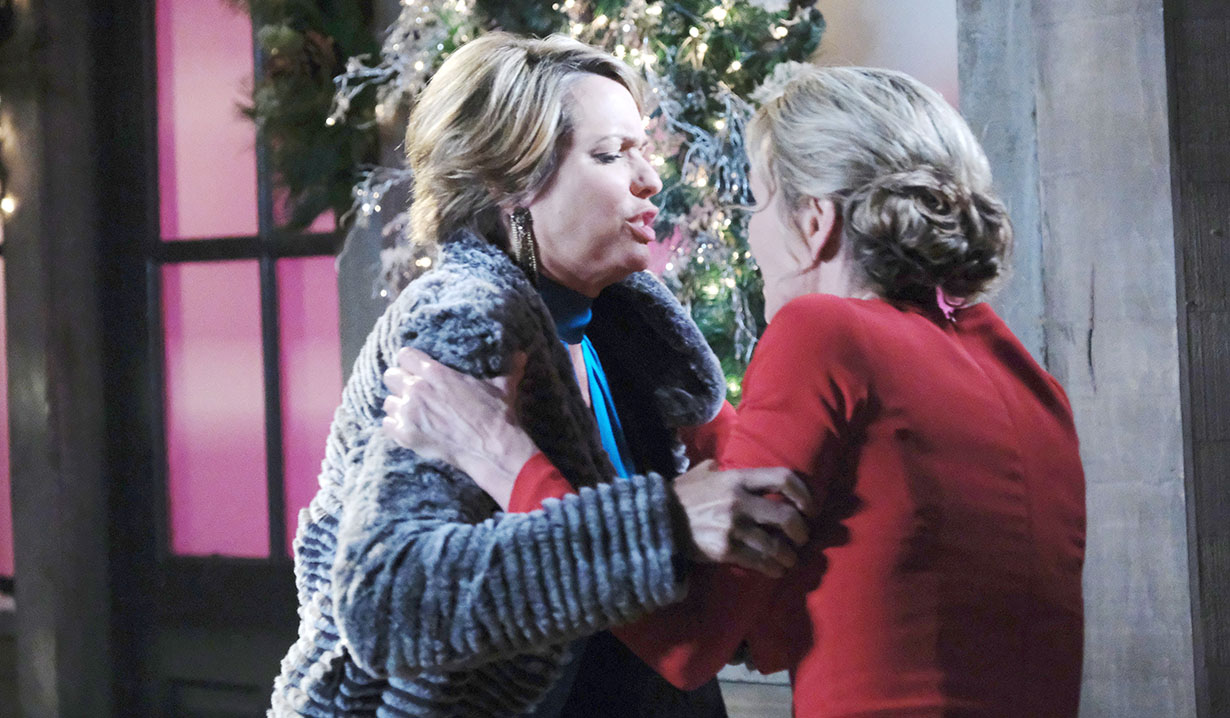 Salemites at Julie’s Place are shocked, some happy, as “Steve Johnson” appears with “Hope” after the clock strikes midnight. Outside, Nicole and Brady kiss while being watched unnoticed by Kristen. Inside, Kayla gasps Steve’s name as he happily announces he’s back.

Gabi and Eli kiss at midnight outside Lani’s Salem Inn room. Lani opens the door in a nun’s habit. They’re shocked to see her as they were looking for Kristen. Lani tells them Kristen’s kind enough to let her stay there. She acts pious and says against her advice, Kristen went to crash a party. Eli’s shocked. Are nuns allowed to go to parties? They discuss the vandalism at the boutique and Lani admits Kristen gave up her habit. They wonder then if she vandalized it. Gabi’s too annoyed and stalks off.

Back outside Julie’s Place, Kristen confronts Brady and Nicole. She lashes out at them for kissing but Nicole calls it a friendly kiss. Kristen saw them together at her place and accuses 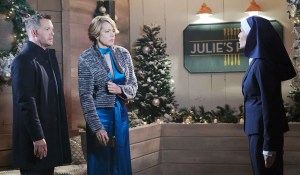 Nicole of being pathetic and desperate. Nicole narrows her eyes, hand on hip. She accuses Kristen of stalking them. Brady wonders why she cares if they’re together. Kristen takes off her habit and veil and says she and God broke up. She tells them about JJ almost killing her and how it opened her eyes to her needs. She is tired of being treated like dirt and thinks she should be forgiven for past transgressions and Lani should be forgiven by Eli. They’re confused more, reminding her that Lani left Eli at the altar. Kristen says there’s more to the story than Lani’s letting on. She begs Brady to let her come back. Brady reminds her she took off after their daughter died. She’s sorry. Kristen begs and Brady fights tears. He asks if that’s true, why is she masquerading as a nun and throwing insults. Kristen finds Nic a predator. Brady balks at that. Nic’s been sympathetic and a comfort. Nicole asks Brady to go and Kristen attacks her. They fight. Brady gets between them and Brady says she hasn’t changed at all. Nicole recounts Kristen’s many misdeeds and asks what’s wrong with her. They go and she tears down decorations, screams, and sobs. Inside, “Steve” says, 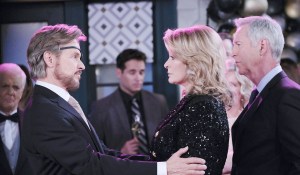 “Happy New Year, Sweetness.” He greets Justin and gets an earful for abandoning Kayla. Steve says Kay’s not the reason he returned. He’s there because of Marlena. “Hope” says she tracked Steve down, worried that Stefano’s targeting Marlena again. Marlena’s surprised since she wasn’t convinced he’s back earlier. Hope says Stefano’s DNA was found in the loft. She didn’t want to take chances with Marlena’s life. “Steve” says nobody knows Stefano better than him or John and Marlena. He assures Marlena Stefano is no threat to her while he’s there. They ask if he’s had leads but he wants to shelve the shop talk until tomorrow. John squints and everyone stares at “Steve,” confused as he tells Marlena she’s never looked better. Kayla confronts him about being Santa at the Christmas party. He denies it and calls her sweetness until Justin tells him to knock it off and takes Kayla away. John asks Hope why she didn’t clue them in on contacting Steve. Steve says it doesn’t matter. They make a good team. They battled Stefano together more than once and know him well. Steve asks to crash at the townhouse but Marlena says their guest room is taken. John offers the sofa.

At the square, Gabi and Eli reel from their confrontation with Lani. Gabi pretends she lost her earring upstairs at Lani’s and tells him to wait for her at home. She’ll get it. She heads to see Lani again. Lani hides a bottle of wine she was about to open when Gabi knocks. Gabi accuses her to stop the act. If she messes with her relationship with Eli, she’ll hurt Julie. She goes and Lani thinks of Eli, while across town, he’s thinking of her. 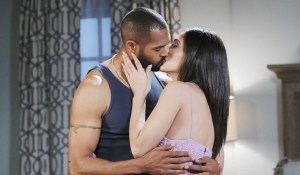 At the mansion, Gabi returns and Eli bitches about Lani’s return. Gabi assures that Lani understands it’d be a mistake to cross her. They make love.

Back at Salem Inn, Kristen explains what happened with Nicole and 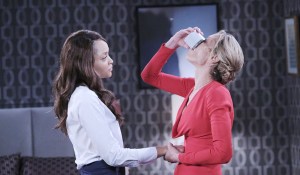 Brady as she drinks. She plans on fighting for her man.

In the park, Kayla and Justin go over Steve’s strange attitude. Kayla calls Justin good and kind. She thanks him for being there for her. They hug.

At the townhouse, John hugs “Steve.” John can’t believe that narcissistic jerk Stefano thinks he has a shot with his wife. John goes to get sheets while “Steve” calls Marlena precious to him – as a friend. He hugs her.

Xander and Victor come to a realization.

<p>Gabi and Eli kiss at the DiMera mansion on New Year’s Eve. Gabi worries about Chad’s taunts so they went out to confront Kristen and ask for her DiMera shares.</p>

<p>Chad and Abigail celebrate New Year’s Eve at Julie’s Place. They worry about the kids since they both woke up but JJ had things under control.</p>

<p>Justin tells Kayla, John and Marlena that Roman wasn’t in the Santa suit at the hospital on Christmas. They wonder if Stefano was the man in the suit. </p>

<p>Nicole arrives at Julie’s Place with Brady. Marlena approaches and talks to her about hurting Eric and warns that she shouldn’t hurt her other son Brady.</p>

<p>It’s New Year’s Eve and Julie makes a toast before the clock strikes midnight. Once Julie’s toast is done, the cheering begins and then the gatecrashers arrive…</p>

<p>John makes a toast with Julie on New Year’s Eve. Marlena and John kiss after and then gasp when “Steve” shows up.</p>

<p>Stevano greets his Queen of the Night at Julie’s Place. He crashed the party as Steve with Princess Gina, pretending to be Hope.</p>

<p>John is welcoming his buddy Steve home. John doesn’t realize that Steve’s actually Stefano which is why he looks so stiff.</p>

<p>Outside Julie’s Place, Brady and Nicole kiss at midnight when Kristen reveals herself. She accuses them of having sex but Brady says though they’re not, why does she care?</p>

<p>Justin hugs Kayla at the park after the party. Kayla’s confused as to why Steve returned and not for her.</p>

<p>Princess Gina as Hope sits with her parents during the New Year’s Eve party. Earlier, Gina wanted to wear her tiara to the party but Stevano flipped a coin and they decided to go as their alter egos.</p>

<p>Lani pretends she’s a nun when Gabi and Eli come around. Lani tells them Kristen’s not around. She gatecrashed Julie’s party.</p>

<p>Kristen attacked Nicole outside of Julie’s Place. Kristen’s jealousy and obsession with Brady made her think they were having sex and she wants Brady back.</p>

<p>After the gatecrashing didn’t work, Kristen goes home to Salem Inn. Lani comforts her as she tells her friend about her night.</p> 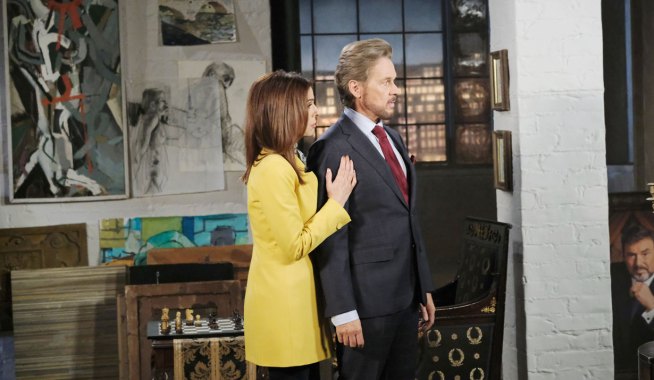 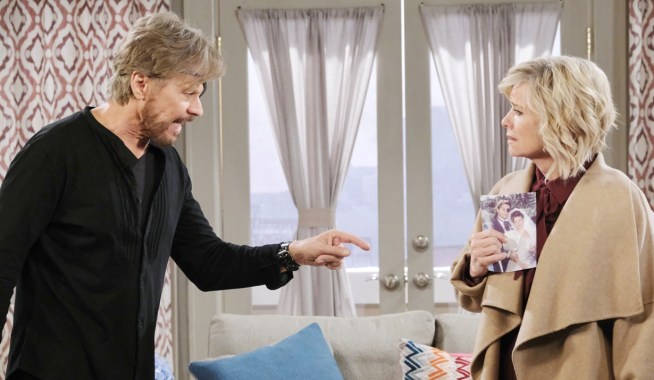