Eve and Hattie Are Released From Prison on Christmas Eve 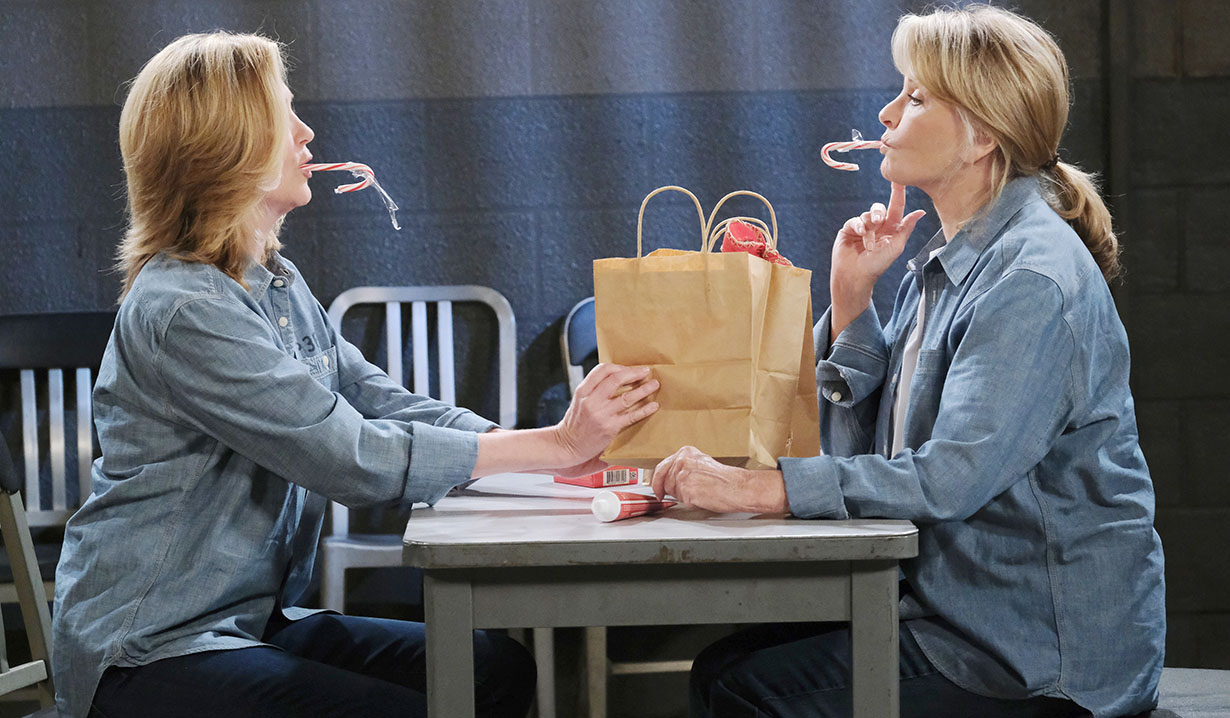 In prison, Hattie decorates a tree as Eve tells her that she just spoke to Justin and is getting out of this hell hole. Later Hattie gets the good news that she too is being released.

At University Hospital, Jenn fawns over JJ. She feels bad that JJ felt he had to keep his addiction secret, but he admits someone else knew. 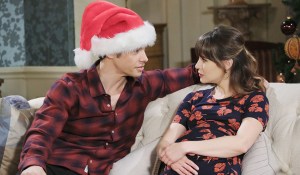 At the Kiriakis mansion, Xander misses a call from Sarah. Maggie explains that Sarah and Eric are busy with the baby’s doctor and probably won’t be taking calls tonight. Maggie has to head to the Horton’s for the tree trimming and asks if he wants to go with her but he turns her down. They wish each other a Merry Christmas. After Maggie leaves, Xander thinks back to spending last Christmas with Sarah who was still pregnant. Xander, dressed in a Santa cap, promised to make sure all the baby’s Christmas wishes came true and had flooded her room with baby toys. Sarah felt awful that she never bothered to get him a gift. His only wish was that next year they’d celebrate like a real family. In the present, Xander realizes Christmas wishes don’t come true for those on the naughty list. 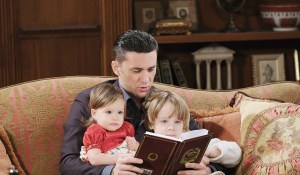 At the DiMera mansion, Chad reads A Christmas Carol to Thomas and Charlotte. Gabi walks in and Chad suggests to the kids they head to Grandma’s to light the tree. He hopes the ghosts of Christmas visit Gabi one night soon. Later, Eli arrives to pick Gabi up for the tree trimming party. He also gives her a gift, framed fortune cookie messages. Flashback to a year ago, both were alone for the holidays and celebrated together by ordering Chinese food. In the present, Gabi is touched that he saved their fortunes. Eli felt that the meal turned things around for both of them. 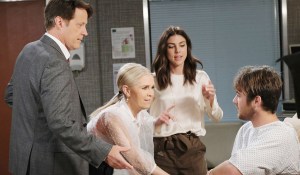 Back at the hospital, JJ tells his family that he didn’t want to ruin their first Christmas back together with his problem. Jack tells his son they’d rather be with him tonight. Flashback to the year before when Jenn was still in her coma. The kids insisted on staying with Jack and their mom at the hospital and skip the Horton party. In the present, JJ refuses to have them spend another holiday in the hospital and insists they all go to the Horton party. 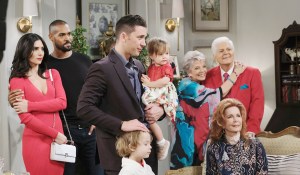 At the Horton house, Chad arrives with the kids, and Julie pulls him aside. She knows there has been tension between him and Gabi and hopes they can put their differences aside for tonight. Julie points out even she has forgiven Gabi and she has changed. Maggie eventually arrives, followed by the Deveraux family and then Gabi and Eli. JJ and Gabi share a moment alone and she assures him that he will get through this rough patch. Julie signals to Chad, so he and Abigail approach Gabi and Eli to thank them for what they did for JJ and Julie. Julie feels now that there is peace on earth they can get to the annual hanging of the ornaments. Julie hopes Gabi will hang her ornament near hers because she feels so close to her, and she opened her heart which is the true meaning of Christmas. Eve enters and exclaims, “Bah Humbug!” Eve hugs Abby and thanks her for being the one who set her free but vows her parents will pay for the travesty of justice that led to her incarceration. She lost a whole year of her life thanks to them, and she’s brought them all a special Christmas gift. She reaches into her purse and Eli throws himself at her to stop her. She tells him to relax, she doesn’t have a gun, and reveals a one-way ticket out of Salem to get away from all of them. She hopes Jenn and Jack get exactly what they deserve. Eve departs.

Back at his place, Gabi begs Eli to never put himself in front of a bullet, but as a cop, he can’t promise her that. However, he promises her that he’s not going anywhere. They read their fortune cookies, which are identical and read, “You will love someone and they will change you.”

At the DiMera mansion, Abby and Chad have put their kids down and snuggle on the couch with some cocktails.

Hattie makes her way to Marlena’s place in hopes she still will put her up for the night because Marlena owes her for saving her life.

Maggie returns home to find Xander is nowhere to be found.

Stevano makes an appearance at the hospital’s Christmas celebration.

<p>Victor Kiriakis takes a call from the Kiriakis estate. It’s Christmastime in Salem.</p>

<p>Jack, Jenn and Abigail visit JJ at Christmas while he’s in the hospital. This is the first Christmas in years that the whole family has been together since Jack’s death years previously.</p>

<p>Stefano (Stevano) dresses up as Santa at Christmas for the annual University Hospital party. The kids are waiting for Kayla to read A Christmas Story. In the past, Steve (Patch) read the book as Patchy Claus.  </p>

<p>Roman and sister Kayla at the pub during a tender moment. This will be another year without Caroline and with Steve being turned into Stefano by Rolf, Kayla also is having Christmas without Steve.</p>

<p>Xander and Maggie spending Christmas together at the manse. Maggie heads to the Horton family Christmas alone after this.</p>

<p>John looks on with a strange expression when faced with a big white pair of panties. Christmas in Salem.</p>

<p>Hattie enjoys a candy cane while she trims the prison tree with homemade ornaments and strings popcorn on it. This, before she and Eve have a Christmas meal together.</p>

<p>Prison has made Eve and Hattie BFFs. This is Eve’s last Christmas in prison before her release. Hattie’s not far behind her.</p>

<p>The Horton Christmas tree trimming ceremony is always a special event for family. This year Gabi gets her own bulb presented to her. Little does Julie know what Gabi has done to her heart…</p>

<p>It’s the most wonderful time of year for Chad and Abigail’s children, Thomas and Charlotte. Here they are with Chad and Maggie at Christmas during the tree trimming.</p>

<p>Jack and JJ Deveraux take a gander at this year’s Horton Christmas tree. There are more bulbs on the tree this year and it’s likely JJ was hoping Haley would have her own.</p>

<p>Gabi and Eli share a kiss on Christmas. Eli’s head of Gabi’s security at DiMera and the pair also have a thing going. But what happens if Eli learns the truth?</p>

<p>Eve Donovan Deveraux surprises the Hortons during their party. Eve’s leaving Salem. She shows them her plane ticket.</p>

<p>Ciara Brady visits her cousin Will at Christmas, and her boyfriend Ben. Both are in prison for murder and it’s the first Christmas they’re locked up.</p>

<p>Xander flashes back to Christmas at the Kiriakis estate from 2019 (since the time jump means they’re in 2020). Sarah was pregnant and the two were getting closer.</p>

<p>Chad DiMera is at home at the DiMera mansion reading to his children, Charlotte and Thomas.They’re listening to their dad read A Christmas Carol.</p>

<p>The Horton Christmas is an annual affair that has them all placing their homemade bulbs on the Christmas tree. It’s significant since they also put up the ones from those they’ve lost.</p>

<p>In the Horton square sits Evan the nanny, Sonny and Arianna. Ari has questions about her daddy Will during Christmas.</p>

<p>Evan has David in the baby carriage as Sonny and Kate discuss Will. Kate’s not happy to see Sonny with Evan since his husband is in prison.</p>

<p>Gabi and Eli spend time at Horton square. They’re just outside of her store, Gabi Chic.</p> 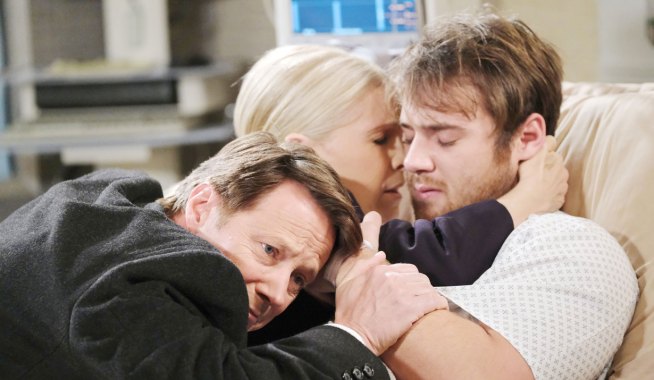 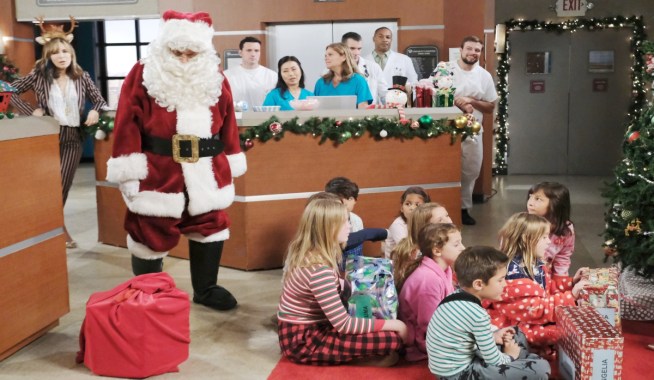