Friday December 13, 2019: On Days of our Lives today, Ciara has plans for Xander, the CCTV footage unveils something interesting, and Jenn is released. 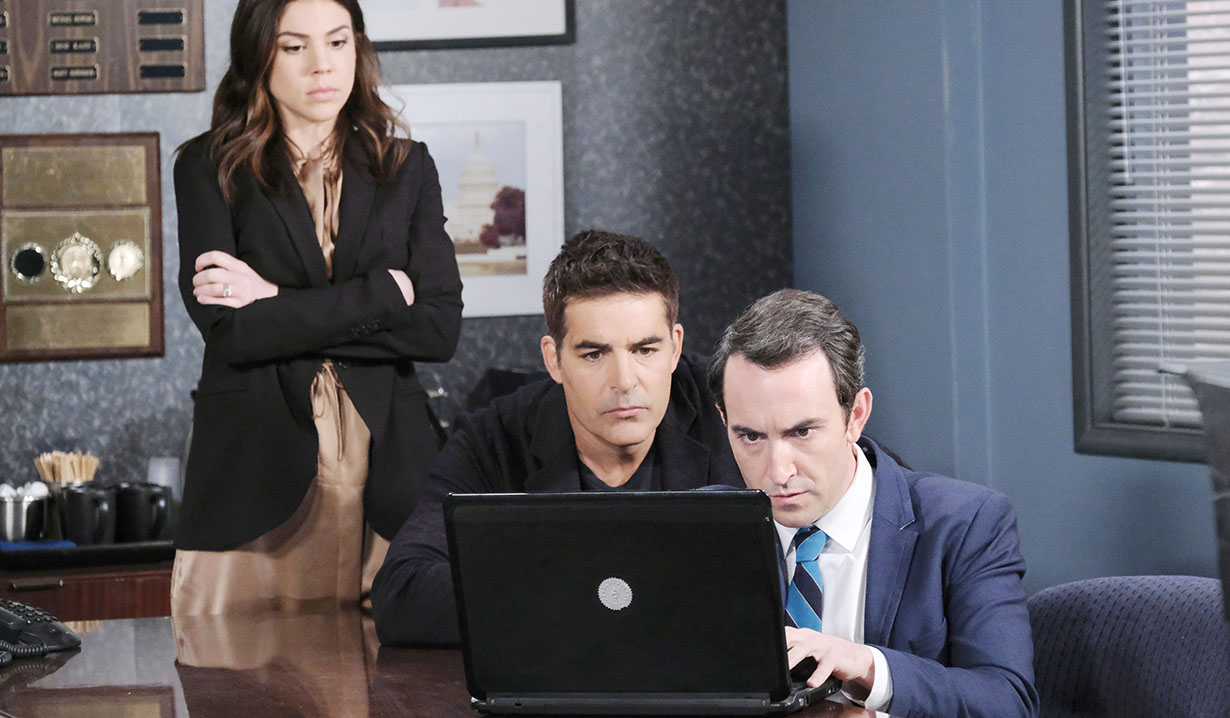 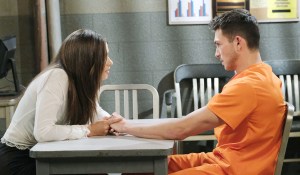 Ciara hates to take advantage but knows Xander will be off his game but will become his new best friend and he’ll let his guard down. Ben becomes angry at the thought of Ciara using herself as bait. She reassures him. When the guard isn’t looking, they kiss. Ben is in pain and tries to hide the reason behind it but Ciara knows he’s keeping a secret. He admits Clyde shivved him when he saved Will from being shivved. Ciara can’t make sense of it and worries. Once she’s gone, Ben finds a dead rat in his bed.

Sarah tells Xander she and Eric are taking Mickey to Boston for aggressive treatment. Xander will go with her. Sarah cries when she says he can’t go because Eric won’t allow it. Xander’s floored. She reminds him he has Titan to run. Sarah’s shocked, knowing that’s all he ever wanted. Xander says it was until she and Mickey came into his life. He needs to do something. Sarah knows and is grateful. She knows how much he’ll miss Mickey and will update him regularly. She calls babies the most resilient patients. She sobs as she blames herself. Xander comforts her and he says goodbye to Mickey, telling her to fight like hell. Xander professes his love for them both and they say goodbye.

At Eric’s, he tells Nicole about taking the baby to Boston for treatment. Nicole wants to help but Eric barks that she can’t. Nicole’s been praying. “Since when do you pray?” Eric bites. Nic says it’s been since they worked together at the rectory. She prays he’ll forgive her. Eric gripes about the secret she and Sarah kept. He doesn’t think he can trust her again. Nicole says this was Sarah’s secret to tell but Eric says Nicole was thinking about herself. In the 20 years he’s known her, she has 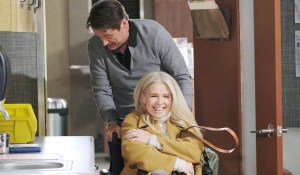 n’t changed. He reminds her she dumped him for 5 million dollars when she married Lucas that one time. Nicole says sitting in judgment is God’s job and that’s how she forgave him after he killed Daniel. Her point, “Who is to say you can’t forgive me?” Nicole apologizes. She says if there is no hope for them, she’ll find another place to live. He tells her to stay or move. He’s not sure how long he’ll be. Nic cries.

Jack arrives at the hospital and happily wheels Jennifer out – she was released.

At the DiMera mansion, Abby tells Chad her mom’s out of the hospital today. He’s happy and wants to go with her to Jenn’s. He lets Abby know he got the specialist to look at the CCTV footage. They embrace and kiss.

Princess Gina strolls into the interrogation room at SPD. Rafe heard she opened Eve’s case. He asks what her first move is. She has none which confuses Rafe. “Hope” doesn’t owe Rafe any explanations and takes off, making Rafe wonder, “What the hell is wrong with her?” Later, Abby and Chad arrive. They tell “Hope” about the specialist they hired to look at the CCTV footage. “Hope” says she can’t let civilians look at it. Rafe appears and offers to use him as a consultant. “Hope” worries but agrees to it. Soon, Buck arrives, (played by Clayton Ferris). 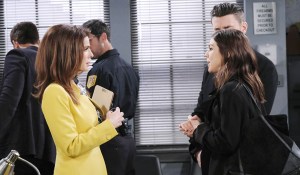 Introductions are made and “Hope” walks off to frantically call Stefano to beg for a plane out of the country as Rafe walks up. “Did you just say you’re leaving the country?” Gina thinks fast. She’ll spend Christmas in Hong Kong with Shawn and Belle since they can’t make it. Rafe’s surprised she’ll miss the Horton Christmas. Chad and Abby rush out of the interrogation room. Buck is certain the footage was tampered with. They all go into the interrogation room. The woman was superimposed with another person but he can uncover who the real culprit is. “Hope” looks sick. She fakes a coughing fit and excuses herself, then calls Stefano again from elsewhere. He’s not there. She panics. Chad gets a text that the plane landed in Salem so he goes to find out what happened in Rome. Rafe goes to get Hope and finds her racing out of the SPD. He stops her. Inside the interrogation room, Buck finds out the real culprit. “Oh. My. God,” Abigail says, shocked.

Jack and Jennifer arrive home and he carries his wife over the threshold. Jenn reminds him of his bad back. He doesn’t care. They head inside and Jenn’s surprised the family isn’t there. Jack asked the family to give them some time. They look at wedding photos. Jenn misses Adrienne. Jack vows nothing will keep her from him again. He brings in a wedding cake. Jennifer’s moved. They cut it together and stuff their faces, finding it delicious. They chat about what they would have done during their wedding reception and get romantic as they dance.

Xander closes himself in his office at Titan and throws things off his desk in despair. Ciara arrives with paperwork. He says to leave it. She heard about Mickey and is sorry. He asks her to overnight something to Sarah in Boston. 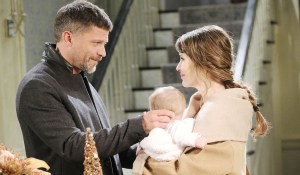 She’ll do that. He takes out his lockbox and says it’s a bracelet – his mother’s. It’s supposed to ward off evil and he’s feeling desperate. Ciara’s nervous when he can’t get his key into the lock. His face grows dark and he asks if she knows anything about it.

Eric picks up Sarah from the mansion, and they take off for Boston.

Eve gets a wonderful surprise.

<p>Xander is sad to have to say goodbye to Mickey. Sarah explains she and Eric are taking her out of town for treatment for her neuroblastoma cancer. </p>

<p>Eric and Sarah share a moment while they prepare to take their daughter out of Salem for treatment. Mickey’s got neuroblastoma stage 3 cancer and will require radiation, chemo and other treatment.</p>

<p>Xander looking unkempt after hearing the news that Sarah and Eric are taking Mickey out of Salem for cancer treatment. Xander thinks of Mickey as his daughter.</p>

<p>In Xander’s office at Titan, he attempts to open his lockbox. Ciara stands by nervously, since this is a new lockbox she had to replace when she broke into the original.</p>

<p>Abigail and Rafe watch Chad’s expert look over the CCTV footage taken the night of Jennifer’s fall off the Bistro balcony. They find something interesting that will change Eve’s case.</p>

<p>Jack carried Jennifer over the threshold for the first time as a married couple. Jenn just got released from the hospital after spending a year in a coma. </p>

<p>Jack and Jennifer are giddy with glee when Jennifer is finally released from the hospital and gets to go home. Jenn’s been in a coma for a year.</p>

<p>At the DiMera mansion, Chad and Abigail kiss. Abigail explains that “Hope” got her the CCTV footage to view the night her mama went off the Bistro balcony.</p>

<p>“Hope” has the CCTV footage for Abigail set up in the interrogation room. Abigail’s excited to learn if the footage was tampered with.</p>

<p>Ben Weston in his prison cell. He finds something interesting…</p>

<p>Ciara visits Ben once more in prison to discuss his case. Ciara’s glad Justin’s taking over Ben’s case and they discuss what comes next.</p> 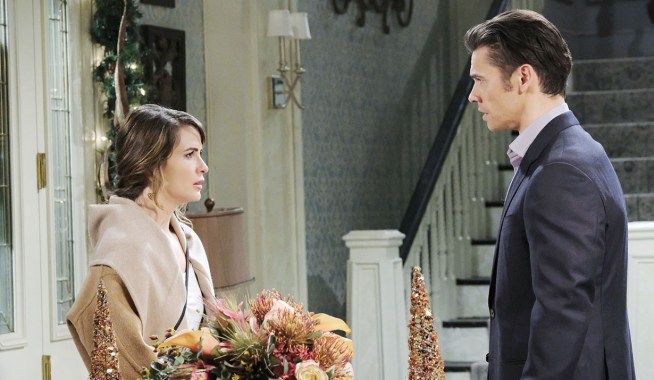 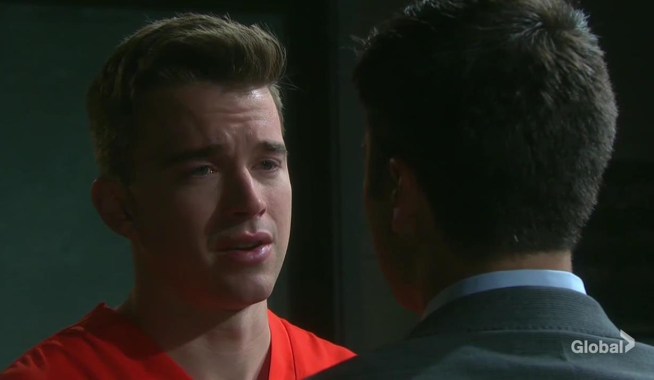