Thursday December 12, 2019: On Days of our Lives today, Maggie, Roman and Kate hear the bad news about Mickey, Nicole learns Eric and Sarah are leaving town, and Kate fights for Sonny and Will's marriage. 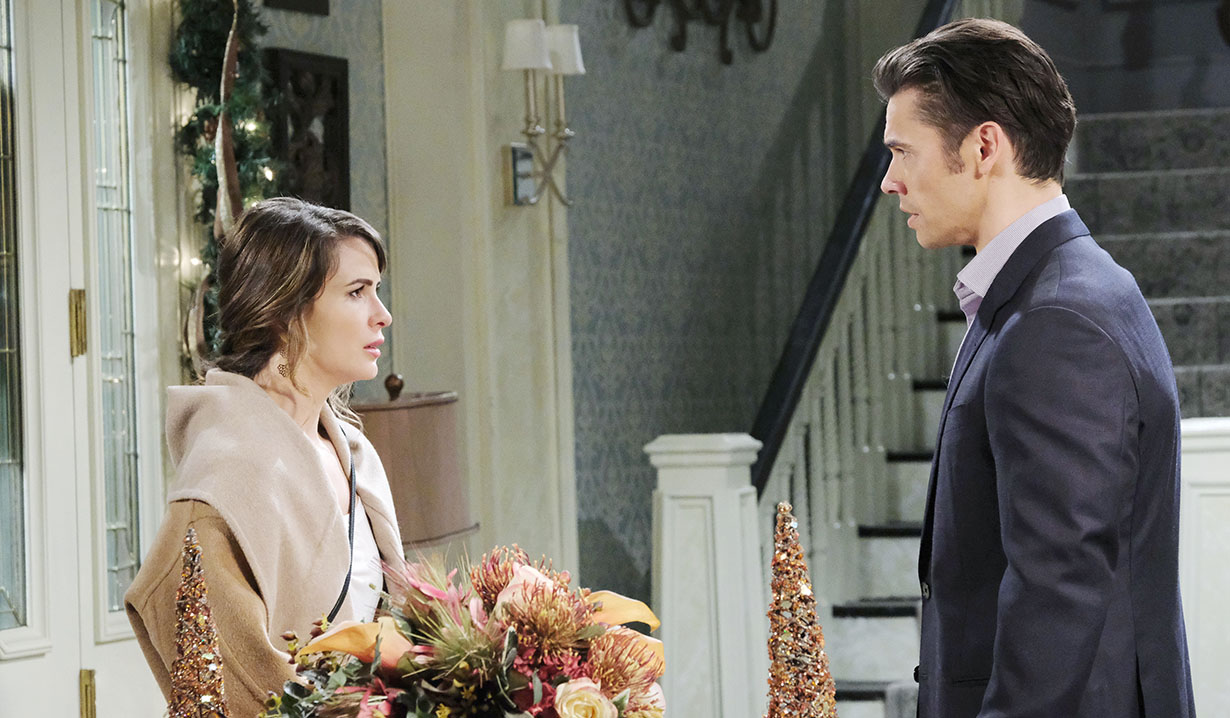 Justin bumps into Will at the prison after seeing Ben. It’s awkward. Justin says he’s taking over Ben’s case. Will thinks Ben will have a fighting chance now. He brings up Adrienne and how he thinks about her daily. He’ll never stop hating himself for taking her away from him and Sonny. Justin nods. Will felt like Adrienne was his mom in his heart. Justin knows Will didn’t mean to hurt her. Will thanks Justin. He says he told Sonny to stay away. Justin’s not sure if that’s the right thing. Will thinks Justin hates him. Justin could never. He hates what he did but thinks of Will as a son and can’t stop loving him. “You’re a part of our family for better or worse.” Justin breaks down. Justin reminds Will that life goes on. He found and fell for Kayla and is happy. Will’s dumbstruck and glad. Justin asks him not to give up on life. They embrace.

More: Days heads to the UK with episodes

Outside the pub, Sonny flashes to Evan’s kiss. Evan appears. Inside, Kate refills the sugar while Eric tells his father about Mackenzie’s cancer. The men hug as Sonny and Evan head inside and Evan apologizes for the kiss. Kate eavesdrops and snaps at Evan. Sonny tells Kate to mind her business. Evan explains that Sonny’s not to blame. Kate thinks other couples have survived worse but Sonny doubts that. Still, Kate begs Sonny not to give up. She goes and Evan’s uncomfortable and apologetic. They toddle off and Kate goes out.

At Basic Black, Brady gets bad news about Mickey and shares it with Nicole. 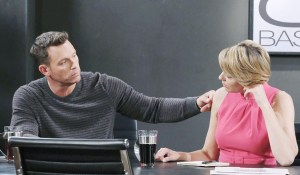 “Oh no, that little baby?” Nic can’t sit around and do nothing. She rushes to find Eric.

At the Kiriakis mansion, Sarah tells her mom that Mickey has stage 3 neuroblastoma. Maggie hugs her as they cry. Maggie’s shocked but Sarah relays that Eric doesn’t want Xander in her life especially since Xander has been a father to Mickey this whole time. It’s not fair and Sarah of all people knows that a step-father can be more than a biological dad. Sarah knows and sobs. She doesn’t want to shut Xandy out but has to pick her battles.

Kayla finds Xander rummaging through her office at the hospital. She demands to know what he’s doing. He wants to know what’s going on with Mackenzie. He fights tears and explains that Eric refuses to allow him to know anything. Kayla’s sorry. She assumes Eric’s unhappy that his baby was kept from him for a year and can’t blame him. They head out and run into Sarah, Mackenzie, and Maggie. Xander holds the baby.

Eric runs into Nicole outside the pub. Nic’s sorry about Mickey’s health and babbles about not knowing this would happen. Eric thinks God is handling him “this way. The right way,” and he can’t be helping his daughter if he’s bitter. Nic asks if he forgives her. She moves to touch him. He’s sorry but he can’t think of anything but his daughter right now. He goes.

Eric arrives at the hospital and his eyes shoot daggers when he sees Xander holding Mickey saying, “It’s okay, daddy’s here.” Eric has a fit. Maggie says Xander has a way with Mickey and Xander begs Eric to let him help. Eric apologizes but refuses and they take off.

Kate goes to see Will at the prison. She states that he needs 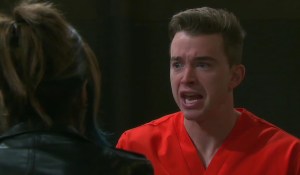 to get over himself and start fighting for Sonny because Evan’s sniffing around. Will knows Evan and calls him nice. Kate thinks Will is an idiot. She tears up and says he and Sonny are meant to be. Will tells her to get used to the fact that he let Sonny go. Kate pressures him to fight.

At the park, Sonny bashes Kate and her bad track record with men. He snipes about her thinking she has all the answers. “She has good ears,” Evan says. They smile and Sonny admits he’s not sure he can find a way to forgive Will. Evan thinks he should keep his distance. 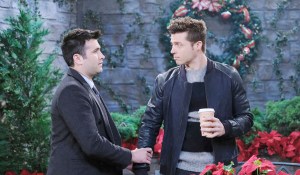 Sonny grabs his arm. He could use a friend. Evan admits he feels more for him than friendship. Will calls. He needs to see his husband.

Nic returns to Basic Black, crying to Brady that Eric says she’s not what he needs right now. Brady gives her the day off since she can’t concentrate.

Kate returns to the pub and Roman lets her know that Mickey’s got cancer. Kate knows the baby will beat this. Roman’s near tears and repeats her thoughts.

At the condo, Justin tells Kayla about his chat with Will.

At home, Xander asks Sarah what the doctor said. He learns she and Eric are leaving town with Mickey.

At Eric’s, he tells Nicole he and Sarah are leaving town.