Tuesday December 10, 2019: On Days of our Lives today, Kate and Stefano flash back to ten months ago, Lani begs for Kristen's life, and Jennifer begins to remember. 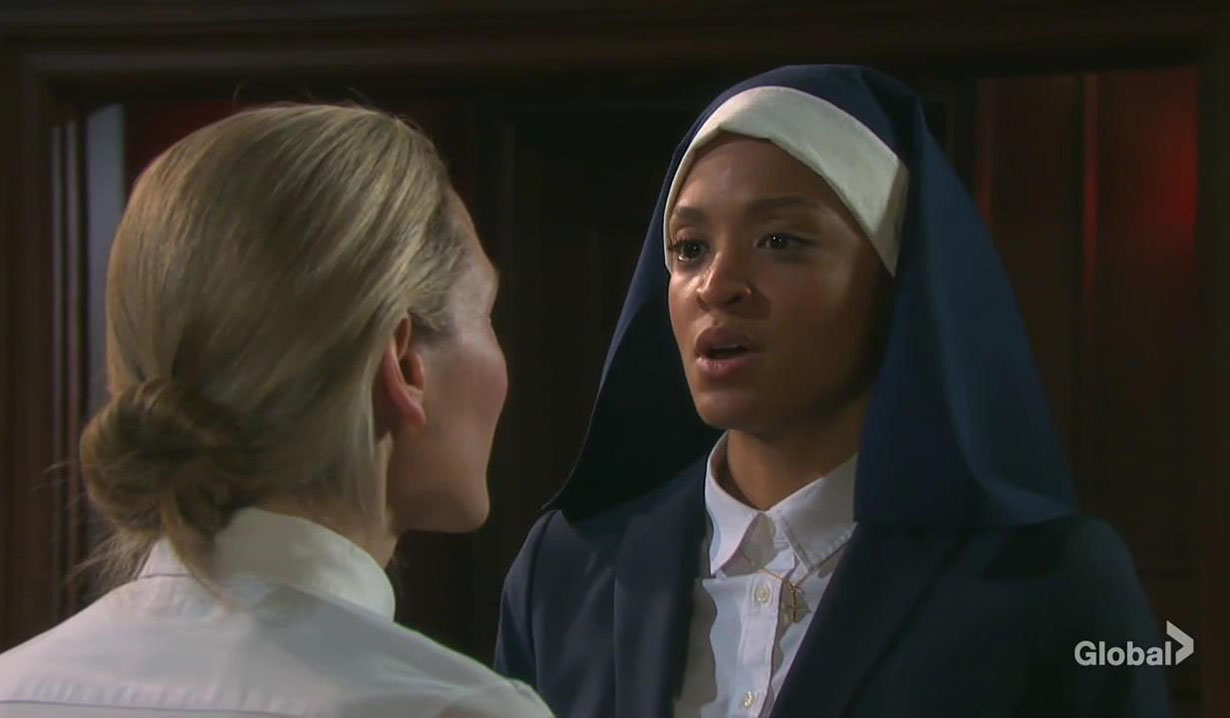 In Rome, outside of the convent, Lani begs JJ not to murder Kristen, reminding him Haley’s death was an accident. JJ shakes and Eli worries when Lani gets in the line of fire. Lani tries to talk him down. Lani knows Kristen has been paying, praying for them both. Lani says Kristen never got to hold her baby in her arms or see the baby’s eyes. Lani and Eli know that pain. JJ was there when she lost David. “It was out of her control,” Lani says, just like it was out of his control when JJ shot Theo. JJ freaks. Lani reminds him 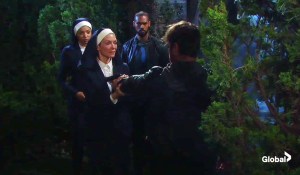 Abe forgave him, as did she and Theo. Eli chips in, saying when Lani dumped him, he found love with Gabi. Kristen jumps up angry. She can’t believe he’s with her of all people. Lani begs her friend not to tell. Kristen knows JJ just wants to heal. If he thinks he’ll find peace to shoot her. JJ lowers the gun as Kristen takes Lani and walks away. Eli grabs the gun and the women head inside and Kristen shakes, terrified. She won’t let them shame her. Lani’s grateful Kristen stood up for her. Kristen realizes she’s not taking her vows. She’ll go back to Salem. She rips off the veil and jacket and asks if Lani’s going to go back and take back what’s rightfully hers, too. Lani strips off the veil and they head out. Outside, Eli helps JJ leave, hoping to keep his ‘ass’ out of jail.

At the square, Jack worries to “Hope” that Abby and Jennifer left the hospital. “Hope” points up to The Bistro and they rush up together. Upstairs, Jenn says she sensed someone come in behind her after she used the computer. Jenn says, “Hope.” Abby asks if she saw 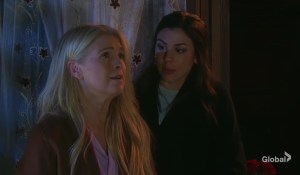 Hope. Jenn says no, Hope’s here. “Hope” and Jack walk up and Jenn gets dizzy. “Hope” asks Abigail why she couldn’t just listen to her. Jack takes Jenn back to the hospital and “Hope” tells Abby she has to stop pushing this. There’s no reason to pursue this as they’ve proof Eve pushed her. Abby’s sorry but something doesn’t add up. Who took the flash drive? Hope shrugs and says it’s irrelevant. Abigail’s baffled. Gina recalls stealing the drive but says she recalls nothing. Abigail says something in Hope’s story doesn’t add up. How did she not run into the person who pushed her mom? “Hope” fakes a new memory that she was still on the elevator when she heard Jenn’s screams. “I’m not sure,” she says. “Hope” reminds Abigail she’s been a reporter for five seconds and then immediately realizes what she’s said. Abby’s offended and shocked. “Hope” apologizes. She hugs Abby and thinks there’s only one thing left to do. She throws Abigail over the balcony then shakes her head from a fantasy.

At the DiMera mansion, Gabi packs up Chad and Abby’s things and says it’s time for him, his wife and their bratty kids to get out of her house. They argue and Chad refuses to leave. He doesn’t think Gabi’s a match for him and Abby. Gabi says fine. Stay. She warns that she intends to win DiMera. “Bring it,” Chad says.

At Princess Gina’s loft, Stefano tells Katarina that it’s thanks to her that he’s back. Ten months ago, at the pub, Gabi yelled at Kate for giving her a lousy meal. She could have strangled Gabi and says it only got worse. She left a letter instead of a tip which read, Here’s the only tip you’re gonna get, Kate. Be a better waitress or get a better job.” Stefano calls his timing impeccable. That day, Stefano texted her. She flashes to arriving at the loft for the first time and being surprised to see him as Steve for the first time. Stevano knows his new face gave her a shock. Transforming Steve into the phoenix went beyond what even Stefano thought Rolf was capable of. They flash to Kate yelling that Steve never liked her. Stefano countered with, “I always loved you.” 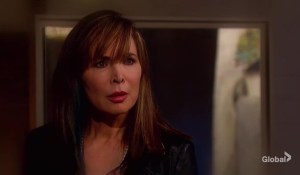 He’d never have chosen Steve’s face but he had no choice. He urges her to ask him anything so she asks about the dosage of insulin she gave him daily and he gets it right. He also remembers their dance at the Penthouse Grill and blackmailing her into a marriage that turned into love and passion. Kate cries and Stefano kisses her neck, one of her favorite spots. That’s when Kate realized it really was Stefano. She asked what he wanted – he wanted her beauty, strength, and passion. An ally. He wanted her to keep her waitress job and felt lucky to earn her trust. They drink and Kate wonders if she made the right decision making a deal with the devil. She asks what he’ll do with Chad lying. Stefano will take care of his son. He texts him about the lie and Chad replies.

Jack puts Jenn into her bed at the hospital. He frets but she’s fine and concerned about JJ. Jack’s so happy his wife is back.

At the pub, Gabi can’t get a hold of Eli about the shares and is annoyed. Kate appears and gives Gabi coffee.