Friday December 6, 2019: On Days of our Lives today, Gabi and Chad go toe-to-toe, Haley's ghost has words with JJ, and Lani fantasizes about how things could have gone with Eli if she'd been honest with him. 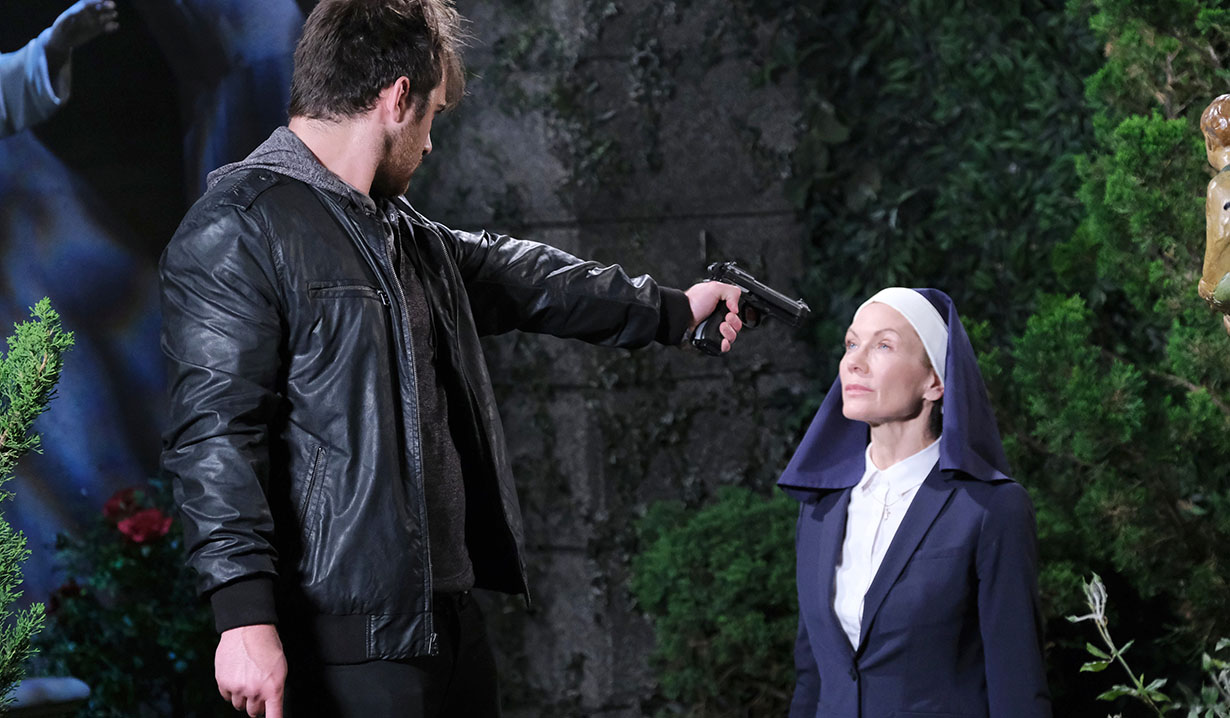 In Rome, Eli calls Gabi with an update from a cafe that he’s arrived. He wishes she was with him. Gabi barks that he should focus on getting the company shares. They’re glad to pull one over on Chad. They disconnect and JJ watches Eli from a bush nearby. JJ goes to follow Eli when Haley’s ghost stops him and asks why he’s following Eli. JJ explains he’s planning on making Kristen pay for Haley’s death. Haley can’t let him throw away his life for nothing. JJ tells her to get out of his head. He runs away. Meanwhile, in the convent, Lani appears to have doubts about taking her vows as a nun. Both agree they made the decision when in a bad place. Lani mentions giving up their worldly goods. Kristen doesn’t mind. The stock is meaningless but giving up love isn’t going 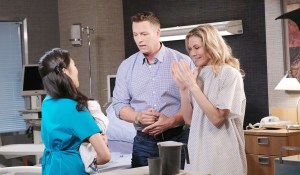 to be easy. Kristen flashes to Haley bringing her and Brady their daughter and how happy they were, welcoming her. Kristen will do her penance there and hopes nobody will find her. Lani knows the pain of losing a child and fantasizes about how she could have done things differently, by telling him the truth about Gabi’s machinations before the wedding. Kristen urges Lani to tell Eli the truth if she’s having doubts about the convent. Is she just hiding from the real world? Lani hasn’t thought of that. She doesn’t know how to forgive Gabi or herself for what she did to Eli. They pray for guidance. Later, Kristen goes to the garden alone. 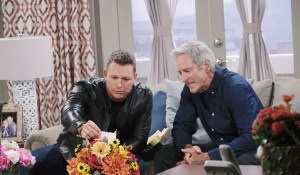 John says there is a Fergie Jenkins rookie card in there. John wants to convert Brady to a Cubs fan. Brady laughs. He says Tate’s collecting and wants to become a Dodgers fan. Brady comments on Marlena’s flowers and learns that John thinks Stefano sent them. “Dead men don’t send flowers, Dad,” Brady states but if he is alive, Kristen’s probably with him. John thinks if she is, she’s gone to a dark place. Wherever she is, Brady just wants Kristen to be alright. He flashes back some more to kissing Kristen and fawning over their kid. John’s so sorry.

At the hospital, Marlena takes one look at Mackenzie and notes she seems lethargic. She feels her forehead and tells Eric she’s running a high temperature.

Sarah kisses Xander passionately in her room at the Kiriakis mansion. Xander was just about to walk out the door. He asks why she’s doing this and she continues to kiss him. They wind up in bed. 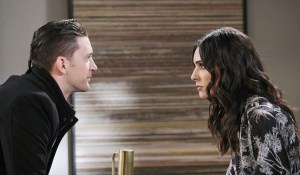 the jet to go to Rome. Gabi is sure he knows why and starts yelling that she knows Chad’s trying to get rid of her but it’s not going to happen. She’s going to get to Kristen and the stock first. Chad doubts his sister will betray him. They argue and she winds up firing him. Chad vows that Abigail will write about what Gabi did to her which will mean Arianna will find out what kind of person Gabi really is. Gabi balks at that. She gives him his job back until she has control of Kristen’s shares. She’ll get rid of him and the board if her demands aren’t met.

Sarah and Xander arrive at the hospital. Eric fills them in the baby’s fever. He refuses to let Xander go with him to comfort the baby. Xander paces while they leave and Marlena returns and she tells him the baby is sleeping. She asks him to go home. Xander doesn’t care what Marlena thinks of him. If the baby cries and needs him he wants to be there. He loves that girl as if she’s his own. Marlena shrugs. “She’s in good hands.” In the kid’s room, Sarah cries and Eric apologizes for not noticing. Sarah doesn’t want him to blame himself. Eric hesitates and then comforts her, his arms around her shoulders.

Back in Rome, Eli goes to change while JJ lets himself into his hotel room, 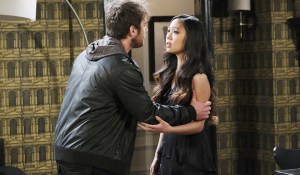 high. He smiles since “the chick at the front desk thought he was Eli’s bodyguard.” He quickly finds Eli’s gun and hides when Eli appears dressed and mutters that he’s not bringing his gun. Once he’s gone, Haley’s ghost returns to talk him out of what comes next. He ignores her and goes.

At the convent, JJ finds Kristen outside and holds a gun to her head as Lani runs into Eli. His jaw drops open.

Chad admits something to Kate.

<p>Chad and Gabi go toe-to-toe over who should control DiMera. Since Chad’s a DiMera, and has Stefano on his side, he thinks he should be CEO while Gabi already has control and wants to pattern the company after what Stefan would have wanted.</p>

<p>Brady drops by his father’s townhouse and John shows him the flowers Marlena received from “S.” They discuss who that could be and John reveals he thinks it’s Stefano. </p>

<p>JJ is ready for payback. He’s heading to Rome in order to confront Kristen for killing his girlfriend Haley. The DA ruled the nurse’s death an accident but JJ still wants revenge.</p>

<p>JJ thinks about Haley before he leaves for Rome. Haley’s death left him lost and on drugs, trying to escape his pain.</p>

<p>This is a flashback to when Kristen gave birth to her and Brady’s baby. The two were happy for a short time until the baby’s death.</p>

<p>Haley holds Brady and Kristen’s baby. This is just after the birth though the baby didn’t make it and neither did Haley.</p>

<p>Eli arrives in Rome at Gabi’s behest. He’s looking for Kristen in order to get her to sell Gabi her DiMera stock but comes upon Lani, who is a novice, and ready to become a nun and take her vows. </p>

Eric Wants Xander Out of Sarah and...

Box Office: ‘Bad Boys for Life’ Rules Over ‘The Gentlemen’