Steve Johnson Is Revealed to Be Stefano DiMera

Wednesday November 27, 2019: On Days of our Lives today, Thanksgiving comes to Salem, Jennifer hears bad news, Abigail believes in Eve, Sonny lets his dad know that he's fine with him dating Kayla, and Marlena receives a bouquet of flowers from S. 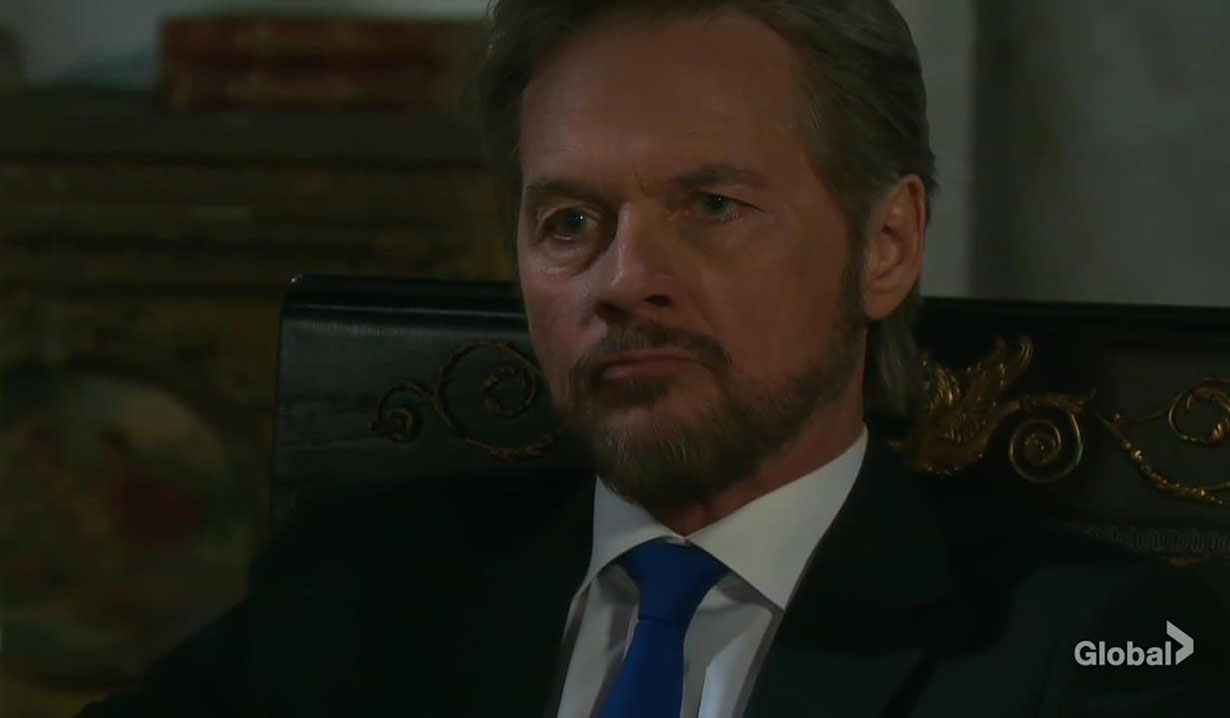 At the hospital, Jack and Jennifer wish each other a Happy Thanksgiving. Jenn has so much to be thankful for. Kayla appears and Jennifer apologizes for exploding when she learned she and Justin were dating. Kayla understands. Jennifer’s had time to absorb everything and she’s happy for them.

At the DiMera mansion, Abigail is on a call with Eve, going over their last conversation about Jennifer’s “fall.” Eve asks her to check the CCTV footage. Abby wishes her a Happy Thanksgiving and they disconnect. She tells Chad she believes in Eve. They wonder if Stefano will reach out today.

Justin and Sonny finish a run at the square and think about Adrienne and Will. Evan walks up. Since Evan has nothing to do Justin invites him for dinner.

At the townhouse, Marlena gets a flower bouquet. The card reads, “Thinking of you, S.”

At Princess Gina’s, the man Gina calls Stefano strokes flowers and Gina comments on him sending Marlena the flowers. She complains about spending Thanksgiving with the “dreary but kind Hortons.” Her painting is finished.

Hattie’s brought to see Eve in the visitation room in prison. Hattie just finished “marshmallowing yams.” Eve asks if she can get some but Hattie says only the VPs get it. She gets “turkey chili.” Eve makes a face. Later, Hattie gets one of the VIP meals. Hattie says the way to survive is by making friends and being nice. She offers some of her meal and Eve reacts kindly. Hattie’s excited. They wish on the wishbone and Eve wins.

Chad and Abby arrive at the hospital. Mr. Chin messages so Chad goes to deal with it and receives a Thanksgiving message from “Stefano.” Abigail goes to Jennifer and Jack with a delicious meal. Since JJ’s not there, Jack’s forced to reveal Haley died. Jennifer’s upset. Abby brings up the night Jenn fell and says she believes Eve’s innocent. Things are tense. Jenn didn’t realize Hope was there when Abby brings it up. Chad walks in and cuts the tension by asking Jenn, “White or dark meat?” After dinner, they take each other’s hands and say a prayer that Alice taught Jenn. Abby and Chad head out and he tells her about his text from his dad. Back in Jenn’s room, Jenn starts to wonder if Eve’s innocent since she swore on Paige’s grave she was. 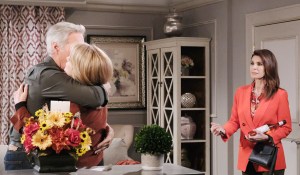 stay there. Marlena’s cold but John’s thrilled but it’s too extravagant. “Hope” says John became a wine connoisseur when Marlena was gone, which annoys Marlena since she didn’t know. John wrote to her and told her but she never replied. Gina flashes to ripping up Marlena’s letters then Marlena tells “Hope” to bring the wine to Doug and Julie. John’s uncomfortable. “Hope” hugs them both, wishing them a Happy Thanksgiving. Once she’s gone, Marlena reveals something is off about Hope. “This isn’t Hope,” she says. They forgo dinner for dessert and make out. Later, Marlena calls Sami and learns she didn’t send the flowers.

At the Kiriakis mansion, Evan is in awe over the size of the mansion and its 48 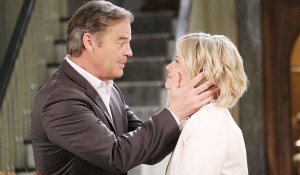 bedrooms. Kayla arrives, nervous. They kiss and Justin says everyone there loves her including him. She lets him know that Jennifer apologized. They hug as Sonny walks in with Evan. It’s awkward. Introductions are made. Justin and Evan get some chips while Kay apologizes for how this must feel to him. He admits it’s a little weird since she’s his aunt. He’s sorry that things didn’t work out. Sonny knows she’s good for his dad and loves her. She loves him too. They embrace. Justin returns, beaming at the scene. Later, dinner has ended. Evan thought Uncle Vic was a trip. 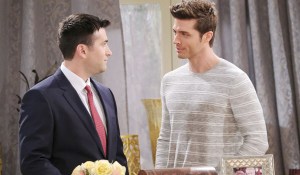 They share a moment and Evan goes. Justin thinks everything went well. Vic didn’t kick anyone out. Xander didn’t hit anyone. They laugh and Justin asks her to move in with him.

Princess Gina returns home and tells “Stefano” all about her visit to Chez Black. She doesn’t get what he sees “in Mar.” She reveals her painting and asks what “Stefano” thinks. She shows a photo of Stefano, who is now played by Stephen Nichols.

Days of our Lives will be pre-empted due to the National Dog Show. 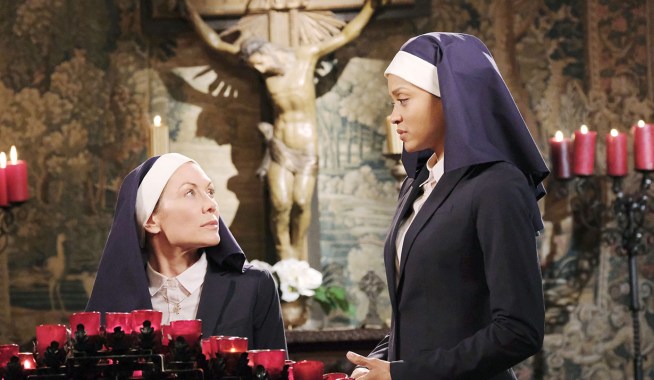 Eric Yells at Sarah for Keeping Mackenzie From Him, Waking Up the Baby 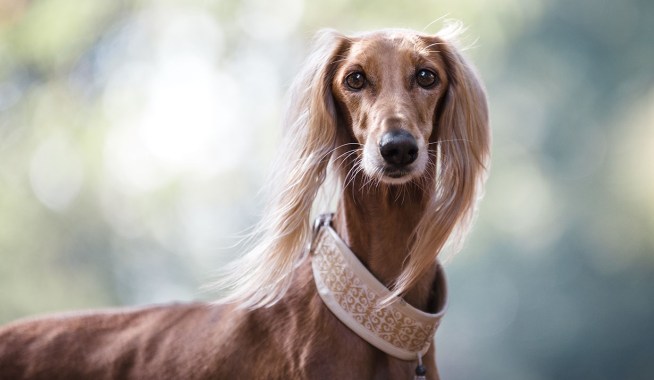