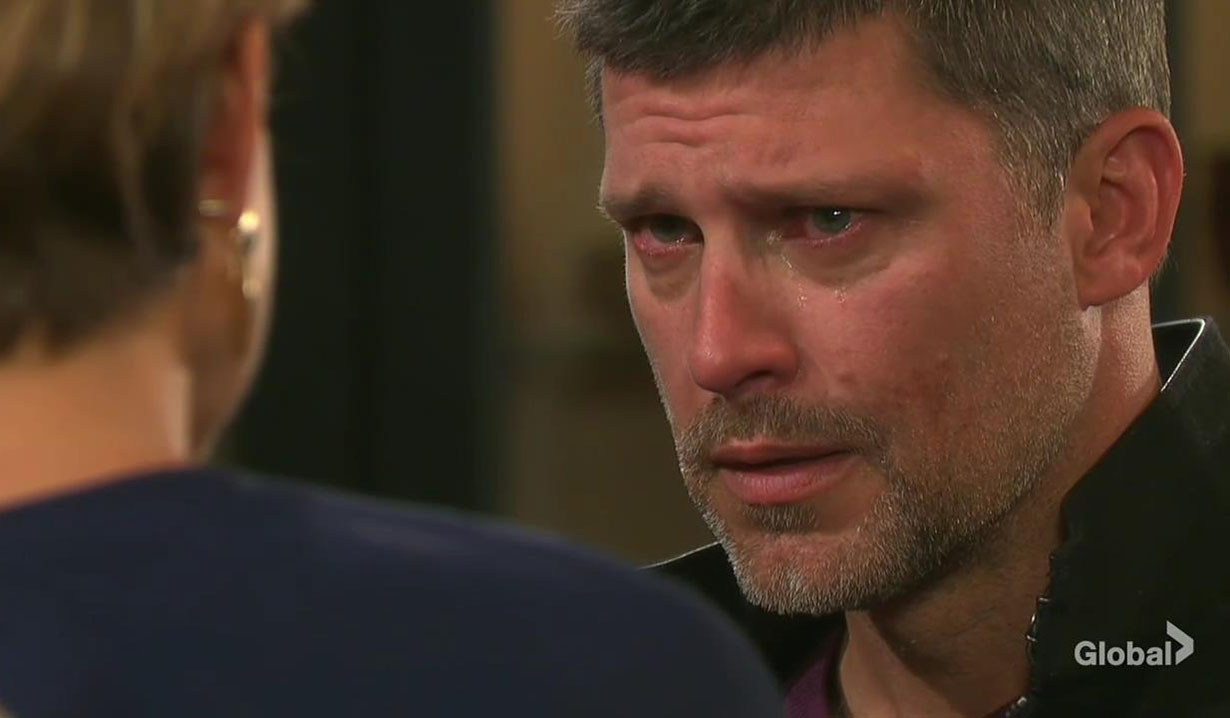 Eli is caught in the DiMera sitting room by Abigail looking at Chad’s last message to the man he thinks is Stefano. Eli covers that he was doing security maintenance. Abigail stops him. What’s the rush? Eli becomes skeptical. They debate whether they should trust Chad and Eli reminds her Chad locked her in a psych ward. Abigail trusts her husband and warns Eli that when Gabi’s feelings are hurt, she tortures men. Eli’s not worried. 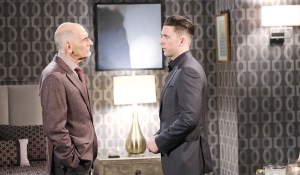 Chad enters the Salem Inn room to meet the man he thinks is Stefano but it’s Dr. Rolf. Chad asks if Rolf’s been pretending to be his father. Rolf scoffs and says no. He’s delivering a message that Chad should put his wife on a leash. Chad won’t do that. Abby does what she wants. Rolf assures that Chad will be in his rightful position as CEO soon.

In prison, Clyde meets Ben in a visitor’s room. Ben’s nervous and asks Clyde to call off the kidnapping. Clyde calls his son a downer. Ben knows Clyde can’t trust Ray. Clyde becomes suspicious. He didn’t tell Ben that Ray was on the job. 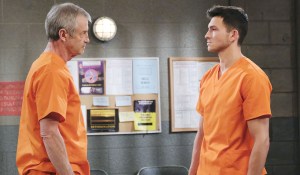 Ben saw him texting Ray and knows the man is crazy and vicious. Clyde shrugs.

Ray texts and Clyde runs off to call him, leaving Ben angry.

At the kidnapper’s cottage, Ciara is startled when Ray wakes up from passing out and accuses her of tricking him. Ciara shoves him and then smashes the potted plant over his head and runs off with Mickey.

At SPD, Xander hands over his confession to “Hope.”

In Eric’s apartment, Nicole is shocked when Eric asks her to marry him and begins to cry. With tears in his eyes, he says he knows this isn’t the most romantic or creative proposal. Nothing would make Nicole happier. She’s dreamt of this but she can’t since she’s been keeping a secret from him. She blurts that Xander’s not Mackenzie’s father, that Eric is. Eric’s jaw drops. Nic confesses everything and Eric takes it in. Nic admits she’s known for over a hear and Eric cries then becomes angry that she kept him from his child. He goes, leaving the ring box behind.

Ciara drops Mickey off at the park and calls Rafe from a burner phone. With a fake accent, she tells him where to find Mickey. She hides to watch over the baby.

At SPD, Rafe disconnects and tells Sarah, Xander, and Hope that he got an anonymous tip. Xander trails Rafe as “Hope” comforts Sarah and hands her the confession to keep hold of for now.

Once Rafe and Xander and some cop find Mickey on the park bench at the park, Ciara smiles and takes off. 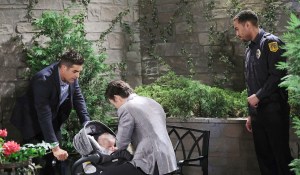 Xander and Rafe bring Mackenzie back to SPD. Sarah stuffs the envelope in her bag and rushes to Mickey and holds her, relieved. Rafe guesses the kidnapper had a change of heart. They take the baby home.

Back at the prison, Ciara sees Ben and he’s upset that she went off on her own to save the baby. Ciara says it’s over – the baby’s home safe. Ben’s relieved and calls her amazing. Ciara just wants Ben home. Ben guesses there’s no confession from Xander but she’ll keep looking. Ben admires her way of always giving him hope. Later, Clyde returns to Ben and lets him know about what Ciara did. Clyde’s exasperated. He’s got to learn to count on him in order to get out of prison. Ben accuses his dad of using him to get out of jail on his own.

Princess Gina returns to her loft and can’t find Stefano. She grows concerned that he risked it all to meet with Chad. Rolf appears. Neither is sure where “Stefano” has gone. Later, he turns up and Gina gets back to painting him, glad he didn’t meet with Chad. If he had taken he meeting, his son would have had quite the reaction.

Chad returns home and tells Abby that he never saw Stefano, that Rolf showed up with a message that he thinks Abs is trying to push her agenda and he wants Chad completely in control. Abby tries not to overreact but it feels as if Stefano’s trying to make Chad choose between her and him. Chad made it clear that they’re a team. He shares that his father has a plan to takeover DiMera. Abs tells Chad about Eli snooping. They discuss how much he’s changed as Eli eavesdrops.

Once home, Xander gets the baby’s teething ring from Sarah’s purse and finds the confession. He questions her and she says Hope gave it to her, admitting it’s from him. Sarah asks what’s in it. Xander lies that he set up an offshore account to pay off the kidnappers. Sarah’s grateful. Outside, Ciara eavesdrops and Sarah goes to take Mickey to bed while Xandy tosses the envelope into the fire. Once he’s gone, Ciara tries to fish it out while upstairs, Sarah and Xander almost kiss. 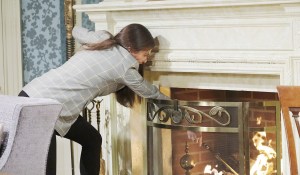 Eric Yells at Sarah for Keeping...