Abigail Investigates Jennifer’s Fall From the Balcony for Eve

Wednesday November 20, 2019: On Days of our Lives today, Sarah reels over her baby's kidnapping, Ben is beside himself after Clyde's reveal, and Xander almost catches Ciara breaking into his briefcase. 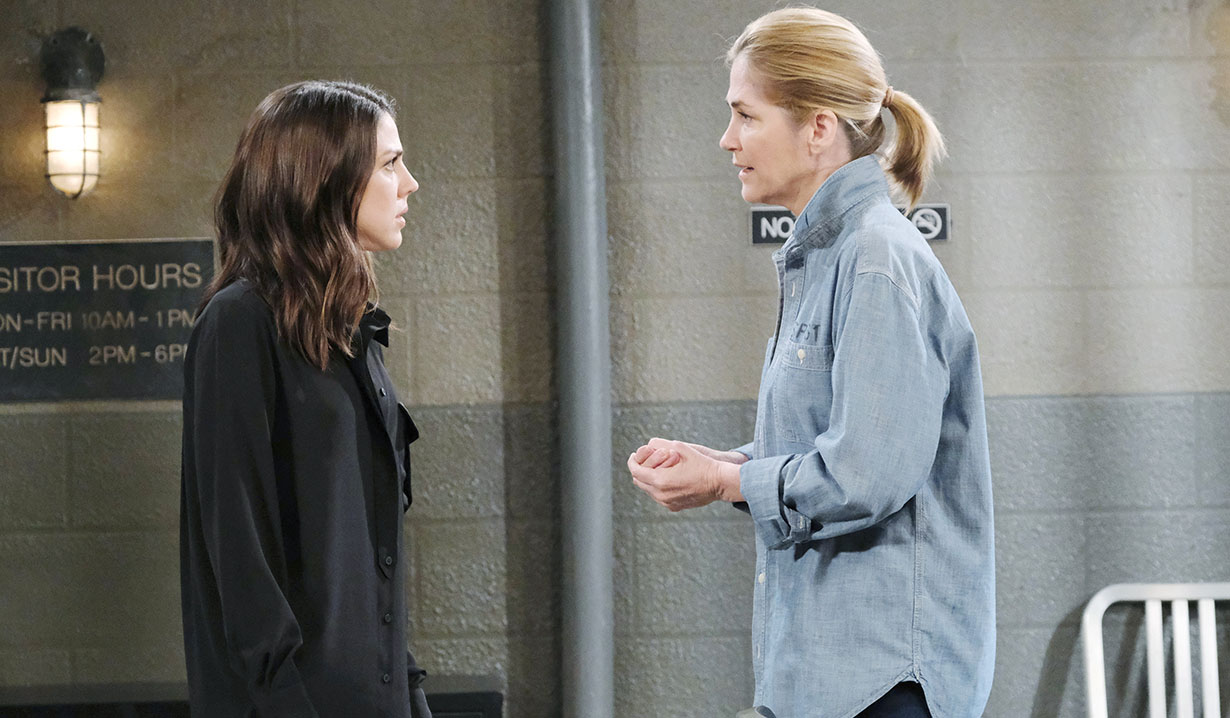 Abigail busts into Statesville, not happy she was summonsed, by Eve. Eve explains that she didn’t push Jenn off the balcony. She was framed. Abigail blows up. She’s heard this all before. Eve says this is just like when Abby set Gabi up. She was wrongfully convicted just like Eve. Abigail’s offended but Eve says she should understand that things aren’t always as they appear. Eve begs but Abigail doesn’t believe her. Eve swears on her daughter’s grave and says now that Jennifer’s awake, she may be in danger, especially if she remembers who did this to her. Abigail asks what she wants. Eve asks her to investigate. Abby will see what she can do. She goes and Hattie appears, ranting that Bonnie wrote in her book that Hattie doesn’t give good advice and that she’s boorish. Eve agrees with Bonnie’s assessment and shares Abigail’s visit.

At Gina’s loft, she’s surprised that the mystery man she calls Stefano has lost the chess game against Chad. The man drops one of the pieces and Gina wants to know if he’ll follow through to meet Chad in person. He says nothing and Gina says this poses a lot of problems that could ruin their plans.

In prison, Clyde reveals he had Xander’s little precious baby girl kidnapped. Ben’s pissed as Clyde explains his friend on the outside “borrowed little Mickey.” Clyde says they’ll get the kid back as soon as Victor and Xander admit they set Ben up. Ben worries about the child. Clyde shrugs and wanders off.

Sarah has a meltdown after someone kidnaps little Mackenzie at the square.

Xander catches Ciara in his office. Her back is turned and her body’s hiding his briefcase. 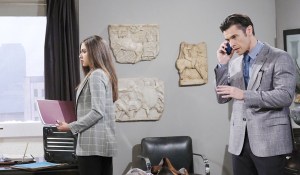 She quickly covers that she has papers for him to see. Before she turns, Xander gets a hysterical call from Sarah about the baby and he runs off. Ciara calls Ben to update him and he tells her about his conversation with Clyde and that he’s planning on having Mackenzie kidnapped. Ciara realizes the kidnapping has already happened and shares that Xander just left after a call from Sarah. They disconnect and later, back at the prison, Will walks in on Clyde and Ben discussing the kidnapping. Clyde covers and Will asks if Ben really wants to hang out with this piece of garbage. Clyde points at Will and reminds him if it wasn’t for him telling Ben Will was still alive and finding Rolf’s diary, Will would still be dead. Will doesn’t care. It doesn’t erase the fact that Clyde tried to murder his husband. Clyde doesn’t like that and reminds Will he killed his own mother-in-law. Ben sides with Will and this bothers Clyde. Ben tells Will he doesn’t have blinders on where his father is concerned. Clyde warns Will he can make life difficult for him now that he’s out of the hole. Will goes and Clyde says the next step is coming.

Sonny arrives at the DiMera mansion for brunch with Chad. Sonny sees the chessboard and asks who he was playing against. “My father,” Chad says, shocking 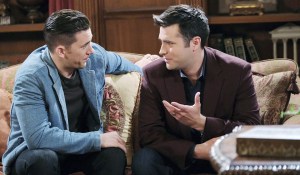 Sonny. He covers, saying he imagines what his father’s next moves will be. Sonny understands it must make him feel close to his father. Chad misses him. Sonny can empathize now. Chad’s sorry. Sonny opens up about still being unable to believe and accept that his mom is actually gone. They commiserate. They discuss Will and Sonny becomes upset as Chad suggests that Will pushed him away not because he doesn’t want to see him but for another reason. Sonny says love doesn’t transcend everything. Chad suggests with time… Sonny says no. His mom is gone and it’ll never change. Sonny brings up his dinner last night with Evan and Chad’s interest is piqued. Sonny explains they’re just friends. He goes and Abs returns – she’s proud Chad won. “Stefano” responds with “Tonight.”

Xander arrives at the square as Rafe’s questioning Sarah. She sobs in Xander’s arms. Rafe calls Hope to update her and Princess Gina answers after seeing the caller ID, “Commissioner Brady?” After the update, Gina rushes off. Sarah sobs and Xander tries to calm her down.

At SPD, Rafe and “Hope” discuss the kidnapping and when Ciara was kidnapped by the dirty cop. They get the CCTV footage and rush off to watch, leaving Ciara behind, hopeful that Ben can convince Clyde to give the baby back.

In the park, Sonny calls Evan for a date.

Ciara finds Xander and Sarah at home. Sarah cries on Ciara’s shoulder while Xander receives a text saying that he’ll get the kid back when he admits what he did.

Eric tells his dad about his future plans.

Someone Kidnaps Mackenzie As...