Monday November 18, 2019: On Days of our Lives today, Sonny dines with Evan and opens up about his feelings, Justin and Kayla have a romantic evening together, and "Hope" gets kicked out of John and Marlena's townhouse. 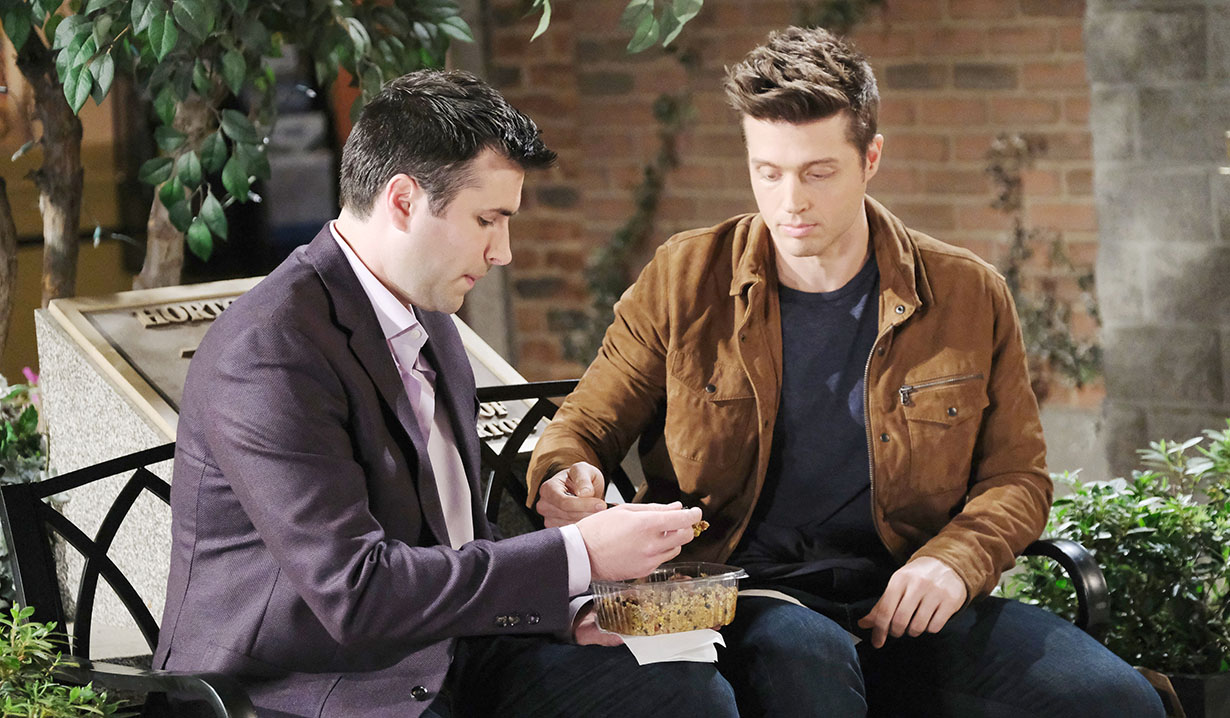 Marlena walks in on John and Princess Gina at home. 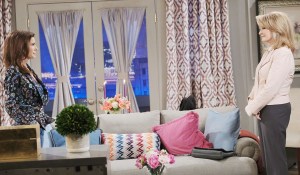 She asks if she’s interrupting something. John dashes to her and hugs her, glad to see her before Christmas. Marlena’s doing the rest of her residency from home. Gina looks uncomfortable. John takes Marlena’s bags to their room and Marlena asks how long Hope is planning on staying there now that she’s home. “Hope” asks if she’s giving her the boot. Marlena wants to reconnect with John and is sure Hope understands.

Kate visits Will in prison. They hug and he asks when she’s going on her trip. Kate saw Sami and the kids at Adrienne’s funeral. They both pause, upset and Will says it’s not the same thing. 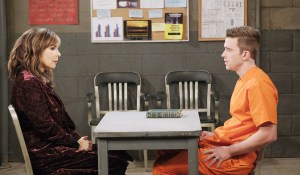 He doesn’t want his grandmother to put her life on hold. Kate doesn’t want him stuck there alone. He admits Sonny doesn’t visit anymore at his request. He flashes to telling Sonny not to visit and Kate sadly reminds her grandson that it was an accident. That doesn’t matter to Will. Adrienne’s dead. Kate understands but he won’t be locked away in this hellhole for the rest of his life. Will muses that his life is still over. Kate refuses to believe that and won’t give up on him. They hug emotionally and she goes, leaving Will to stare at Sonny’s photo.

Sonny finds Evan at the square with food from Julie’s. He offers to share with Sonny who hasn’t eaten. They have a picnic on a bench and eat some quinoa and joke that David’s like a caffeinated chipmunk so Evan needs his strength. Evan loves kids but didn’t plan on being a nanny. Sonny gets to know Evan more and learns he moved from the west coast after a relationship fell apart. “I wanted a place that was simple, quiet, not a lot of drama.” Sonny finds that hysterical. “Wow you really need to do your research.” Talk turns to Will. Sonny still can’t fathom that his husband took his mother away from him. Evan asks if he’s had therapy. He has but isn’t sure he can get over Will destroying their lives. They finish dinner and make plans to watch football together and have coffee.

Justin greets Kayla at her condo. They kiss and Justin calls himself a lucky guy. 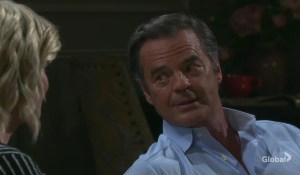 Kayla is the lucky one. They dine and talk about Julie’s pacemaker going off for no reason. Kay touches base on what happened to Adrienne being so devastating to them all. This week has been hard, especially for Sonny. Kayla knows this would have been Justin and Adrienne’s one-year anniversary, too. Kayla flashes to six months ago when she gave Justin the news that Adrienne has died. Justin panicked and sobbed and Kayla held him while they cried together. Justin’s grateful to Kayla for being there for him. She reminds him he was there for her too. They reminisce about dinners at the pub and to three months ago when she moved into a condo after Kayla sold her house. The same day, she received filed divorce papers from Steve and Justin was there for her. While he comforted her, they shared a kiss. They kiss and talk about naysayers on social media who may bash them for being together. Justin doesn’t care what anyone thinks. They make out.

At Princess Gina’s loft, “Stefano” reads Abigail’s text from Chad stating he can’t communicate with him anymore unless they meet. He responds, saying he knows it’s Abigail’s words and asks why she’s interfering. Abigail messages back from the DiMera mansion that she and Chad are a team who make decisions together. She and Chad argue when she types that Stefano doesn’t have enough courage to face his son. Jack intervenes. He dropped the kids off with the nanny and Chad goes to tuck them in. Chad looks at the laptop as Abs ushers him out. Jack tells her about how the kids had Jennifer read them Sleeping Beauty. They look at photos and Jack admits Jennifer was tired. Jack admits he worries since last time she closed her eyes she fell asleep for a year. There’s still so much she doesn’t know. They discuss Abigail’s new job at The Spectator, taking over for Adrienne. Abby segues into telling Jack about what she and Chad were arguing about when Chad returns. Chad sends Abby upstairs to tuck their kid in and Jack says they can discuss it tomorrow. Chad asks if she really would have told her dad about Stefano. Abby says this is a huge story. Chad argues that this is his life. They agree to be respectful of the man Chad thinks is Stefano, and Abby finishes her message asking him to meet. He will under one condition…

Jack arrives at the townhouse and gives John and Marlena the hourglass. He doesn’t need it anymore and is grateful to them for lending it. Jack goes. Marlena needs a shower so John laughs that he thinks he’ll get into her shower with her. They laugh and say goodnight to “Hope.”

Marlena Walks in on John With a Half...

Someone Kidnaps Mackenzie As...