Friday November 8, 2019: On Days of our Lives today, the show celebrates 54 years of dramatic storytelling, today marks the never-before-seen in soap history - time jump. Days jumps one year in their storylines. One couple celebrates a year of marriage, while Princess Gina tries to ensure Jennifer dies. 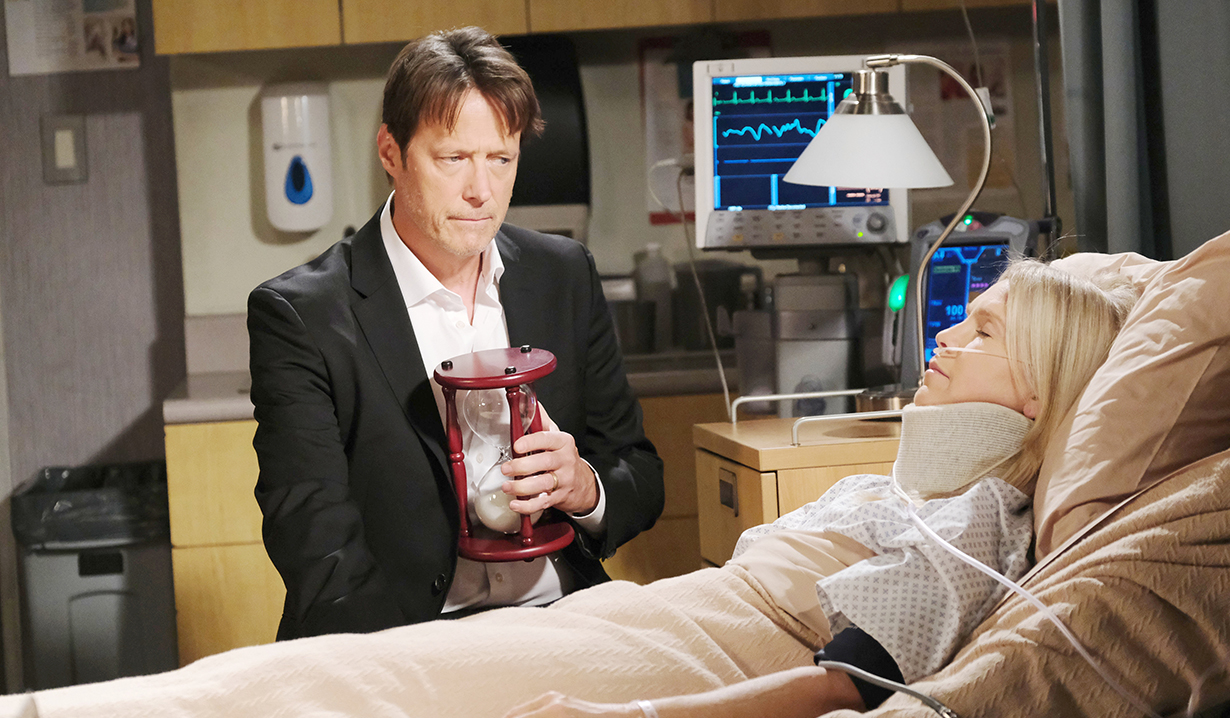 In the square, John wishes Marlena a happy one year anniversary. They kiss and he tells her she’s the best thing to happen to him. He gifts her an hourglass. He used to bring it to the hospital and pray she’d come back to him. It’s his way of saying, “Love never gives up hope.” Jack appears. Marlena’s sorry about Jennifer. Jack asks how John stayed sane when this happened to Marlena. Jack explains he’s looking for the flash drive Jenn stole from Rolf. He speculates that Rolf’s responsible for Jenn’s fall. They talk about looking into it. John tells Jack about how he hung in there during Marlena’s coma, using the hourglass. Every day he’d turn it over with the hope that this would be the night she’d wake up. Marlena suggests Jack needs the hourglass so John gives it away. “Turn this over every day Jack,” he says and asks him to have faith Jennifer will come back to him. When that day comes, he can give it back to them. Jack leaves, appreciative and Marlena says she recalls something Tom Horton once told her. “Like sands through the hourglass, so are the days of our lives.”

At the hospital chapel today, Kristen interrupts Eric’s prayer and asks if he has influence 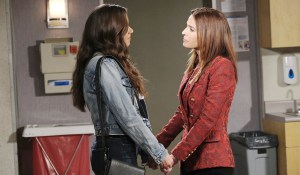 with “the almighty.” Kristen says what she did to Eric was hideous and she doesn’t want her child to see her do things like that. She has to be honest. She reveals Sarah’s pregnant with his baby as Brady walks in. Eric thinks she’s lying. Brady admits he didn’t know. Eric flashes to Sarah fainting and starts to realize Kristen’s telling the truth. In Jennifer’s room, Princess Gina’s about to smother Jennifer when Ciara interrupts. They commiserate over Jenn still being in a coma. In the chapel, Eric has left and Brady’s surprised Kristen didn’t tell him first. She thought Eric deserved to know first. She wanted to make amends for past transgressions. Brady asks if she was trying to score points with him. Kristen wants to prove she is willing to change. She’ll do everything she can. Brady kisses her.

Nicole finds Sarah about to leave Salem from the Kiriakis mansion today. She stops her and shows her positive pregnancy results. She knows Sarah’s pregnant with Eric’s baby but hasn’t told Eric because she’s terrified their baby would bring them back together. She asks Sarah to promise to keep it to herself. “Are you that insecure?” Sarah asks. “Yes,” Nicole admits. Sarah cries. Nicole feels guilty, knowing she’s being selfish and she’s sorry. Sarah thinks Nicole and Eric belong together. She doesn’t want to come between them. Nic admits Xander knows. Sarah already knows that but she didn’t know that Xandy paid Rolf to bring the results to Eric, thinking he could talk Sarah into staying in Salem. Sarah’s flummoxed by that. She tosses the results into the fireplace. 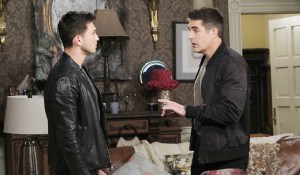 the window when he left this morning and now it’s wide open. He notices Ciara’s photo smashed. He blames Jordan. Rafe tells Ben to find Ciara and get out of Salem. He’ll text the safe house address. Rafe goes and someone watches from the bushes as Ben locks up and leaves a message for Ciara not to go home.

Ben tears into the hospital today and interrupts as “Hope” is about to smother Jenn. He asks if Ciara’s there. She tells him Ciara went home. He runs off, worried. Later, Rafe calls and asks “Hope” to the SPD. Once she’s gone, Jack appears with the hourglass, crying.

At SPD, Rafe asks “Hope” for her help with Jenn’s fall today. He asks her to look at the security cam footage so they can nail down what happened to Jenn. Rafe sees a shadow of someone coming to the terrace.

Ben arrives home to the gatehouse today and the place is a mess. 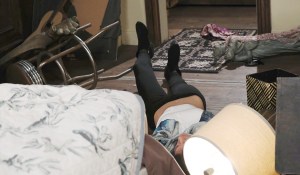 He’s about to call Rafe when he sees Ciara on the floor. He sobs as he feels her arm and says it’s cold.

Back at the hospital, Jennifer wakes up and it’s a year later. Jack sobs happily and can’t believe she’s back. He explains she fell and was in a coma. Jennifer asks how. Jack says he’s just glad she’s back after so much time. She asks how long. “It’s been a year.” Jennifer looks confused.