Friday November 1, 2019: On Days of our Lives today, Lani's mother arrives for the wedding, Jennifer and Jack apply for a wedding license, and Gabi taunts Lani. 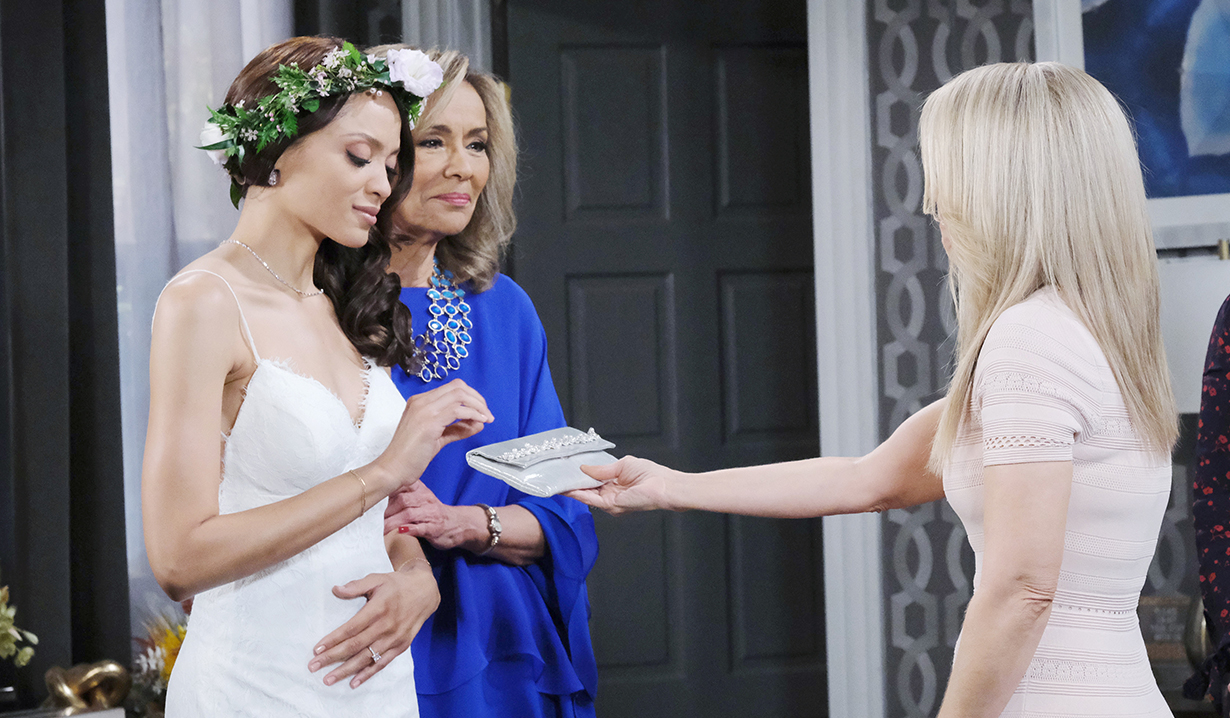 Jack brings Jennifer breakfast in bed with a newspaper. He wants her to see the headline. She laughs. She knows what it is, “Jordan Ridgeway’s Reign of Terror.” She wrote it herself. She opens the paper and sees an application for a wedding license. Jenn’s shocked since he’s a commitmentphobe. He’s seizing the day and this time when he marries her, it’ll be forever. Jenn kisses him then signs the application. She needs to get ready since the bridal party is on the way over. Jack takes off.

In the Kiriakis mansion, Sarah and Xander have trouble zipping Sarah into her dress. 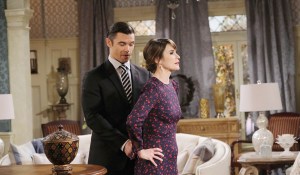 Maggie appears and starts crying. Will Sarah reconsider staying in Salem? Sarah won’t but she’ll miss everyone. Xander leaves the room and Maggie says she likes Xander but doesn’t like them dating. She asks if Sarah’s trying to make Eric jealous but Sarah denies that.

At Princess Gina’s loft, Gina’s ready for Lani and Eli’s wedding. Rolf doesn’t think this is a good idea for her to attend as royalty but John will be 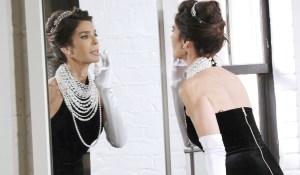 there and she’s certain he’ll want to see her. She asks if he’s concerned that Hope will see her. Rolf thinks fast and lies that Hope’s out of town. Gina removes her tiara and takes off with Rolf stammering. He tells Stefano’s portrait that Gina will do something outrageous if he doesn’t give her some leeway. If everything goes according to plan, this will be worth it in the end. Someone calls and Rolf says, “Yes sir?”

At the square, Eli hugs Marlena. Val had emergency surgery and can’t make it, but both Eli and Marlena know it’ll be a perfect wedding. John won’t make it either, she says. He’s working. Eli pointedly says that a lot of people aren’t going to be able to make it. Later, Xander sees “Hope” and tells her she looks fabulous. Princess Gina doesn’t know him and asks who he is. Xander is flummoxed. Jack appears and Gina is excited to see him. Xander meanders away and Jack confidentially tells Hope he and Jennifer got engaged. Gina’s surprised and hugs him. Jack talks about wanting a honeymoon that doesn’t include Jenn on her cell about work or Rolf’s flash drive. Gina’s interest is sparked and Gina asks if Rolf’s up to something nefarious. Jack raises his eyebrows and reminds her that it is Rolf!

At The Bistro, Lani flashes to Gabi’s blackmail and isn’t sure what to do. Abe arrives and notices Lani looks serious. Abe knows they can get through anything. 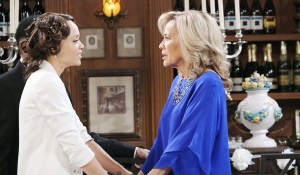 When Lani’s mom, Tamara Price (played by Marilyn McCoo) arrives, Lani jumps into her arms. Both tear up.

Gabi visits Julie in the hospital with a surprise. She takes out her cell phone and shows Julie an app she downloaded. She’ll live stream Eli and Lani’s ceremony for Julie. Julie’s touched. She’s misjudged Gabi. Gabi agrees. She texts Lani to get to Julie’s hospital room.

Back at The Bistro, Lani’s happiness is threatened when she receives Gabi’s text. 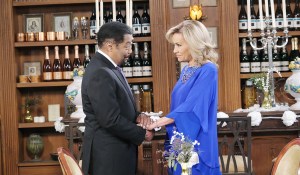 She leaves Abe with Tamara and they think Lani has pre-wedding jitters. It’s been years since Tamara and Abe saw one another. She hopes that someday he’ll consider her a friend. He takes her hands and grins and says she’s much more than that, she’s the mother of his child.

Lani arrives at the hospital and Julie boasts about the wedding being live-streamed. Lani needs to tell Julie something and turns to Gabi. Gabi presses the button so Julie’s heart races and Lani glares at her. Gabi stops abusing Julie and Julie says she’s fine now. The women leave and Gabi reiterates her blackmail. Lani asks if she can at least dump Eli before the wedding so he’s not so humiliated. Gabi refuses her request and sashays away with Lani almost in tears. Eli arrives at Julie’s room later and learns about the live-streaming.

Maggie and Sarah arrive at Salem Inn to Jack’s room. They learn she and Jack are engaged and squeal in delight. Lani arrives and fights tears. They start by getting Lani’s dress on. Jenn says Hope’s supposed to have something new but since she’s not there, Sarah 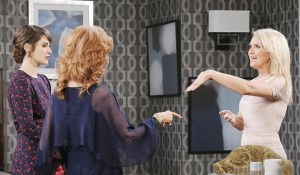 says Lani’s gown is new. Jenn lends Lani Alice’s wedding purse, and Maggie gives her a blue handkerchief which she and Julie made. Lani runs off sobbing.

Outside Salem Inn, Eli hugs Billy, an old FBI mentor (played by Billy Davis Jr). Eli introduces him to Abe and asks that they get together soon. Later, Marlena finds “Hope” and tells her John can’t make it. Gina’s visibly upset and runs off, running into Jennifer and Jack. She brushes them off.

Back at the square, everyone starts taking their seats and 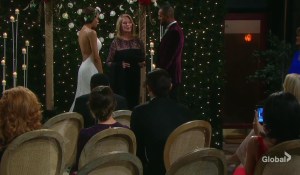 Lani appears in her wedding gown with Abe. Lani streams the event. Tamara sings Ave Maria as Lani walks down the aisle. Marlena begins the ceremony…

Lani Dumps Eli at the Altar on Their...