Marlena, Jordan, Claire and Ben Go on a Murder Rampage on Halloween

Thursday October 31, 2019: On Days of our Lives today, Jordan breaks Claire out of Bayview to cause mayhem, Tony shocks Marlena and John with a big reveal, and some deaths occur all on Halloween. 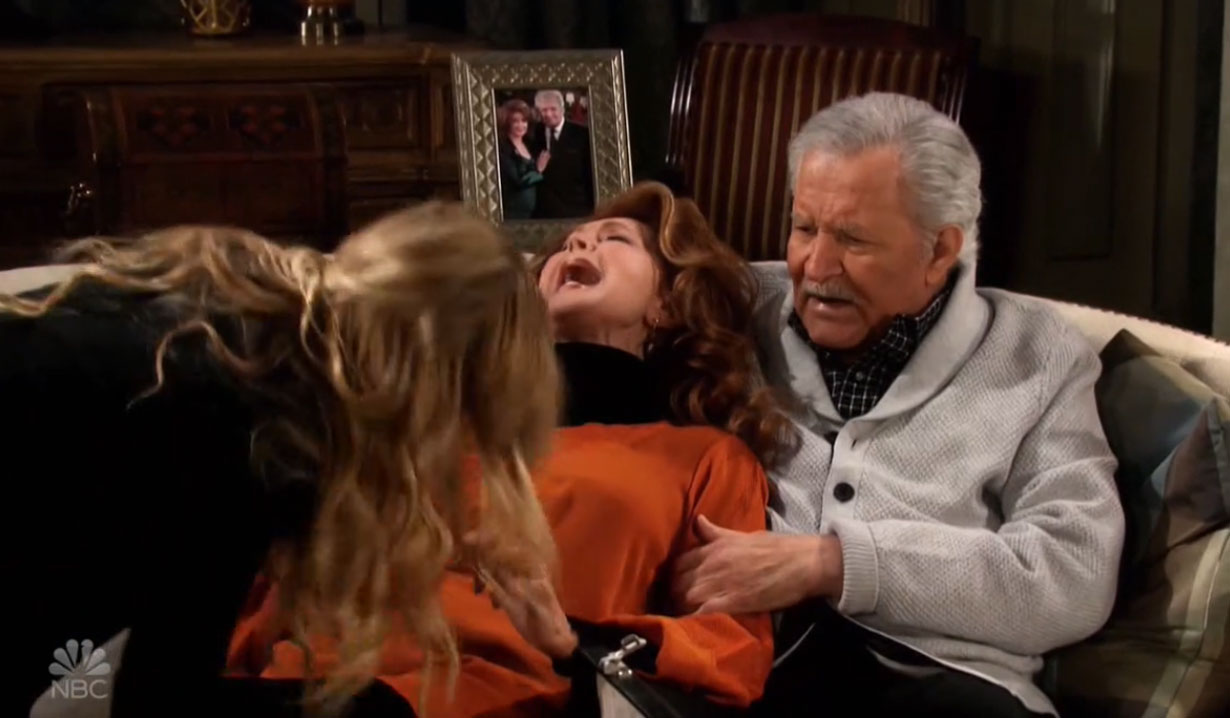 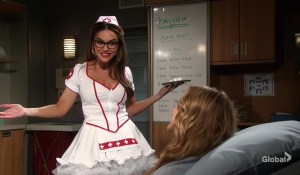 Claire out and cause mischief.

Ben leaves Ciara home while he goes to see Victor. Will turns up and finds a necktie of Ben’s. He winds it around his hand and asks if she’s frightened Ben will kill her in her sleep. She’s not. Ben has a lot of love to give. Will says he also has “a lot of violence to give.”

At the Kiriakis mansion, Maggie overhears Victor telling Ben his men are going to kill Jordan. Maggie tells him, “The hell you are.” She tells him to let the police handle it. Maggie asks Ben to go be with Ciara. Once he’s gone, Maggie agrees. He should have Jordan killed. “She’s a menace. She said some hateful things about my lemon bars.”

At the townhouse, John and Marlena cuddle on the sofa watching a scary movie. Marlena thinks a movie about a woman being possessed is a little far-fetched. A knock brings Marlena to the door. A masked man stands before her in a black cape with a sword. She screams and John tries to close the door. Tony rips off his mask and says it’s just him. They let him in, grumbling and when John gets the drinks, Tony explains that he’s killed Anna. Marlena asks why he’d do that. He loves Anna. Tony says he’s actually Andre. Later, John reappears and grabs back-from-the-dead Andre. He tells John that he has an accomplice. Marlena hits John over the head with a baseball bat and Andre says, “The Salem Stalker kills again.” Marlena gives him an evil smile.

Jordan and Claire arrive at the hospital and interrupt JJ and Haley making out in a bed in the lounge. They’re both wearing sexy nurses’ costumes and wielding knives. They want to know where David is. Neither knows so Claire stabs and kills Haley. “She should not have taken Tripp away from me!” She can’t deal with the hysterics so stabs JJ in the back.

At Rafe’s he mopes over trusting Jordan. She appears and apologizes. The cupcake was meant for Ciara. Rafe says that doesn’t make it okay. 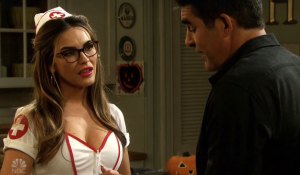 She needs help. Jordan professes to love him. He didn’t know. She asks to start over. Rafe’s not sure. Romantic music plays as Rafe tells her it’s hard to say no to her. They kiss passionately. Jordan dresses Rafe in a doctor’s coat, glasses and says they need disguises. Rafe’s not feeling well. Jordan grins. She used the same poison in her lipstick. She calls it the kiss of death as Rafe keels over dead.

Claire arrives at the Kiriakis house. Maggie and Vic are shocked to see her. 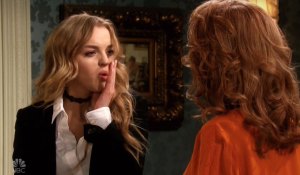 She says she’s been released and is excited about a brand new start. She wants to sign up for Titan’s executive training program. Victor’s sorry. Ciara got the last spot but she can apply next year. Claire starts yelling about how Ciara takes everything from her. Maggie thinks some chamomile tea will help and a lemon bar. Claire hates her lemon bars. Maggie slaps her across the face – how dare she? Claire shoves Maggie on top of Victor and injects her with a syringe. Victor says she’s dead. How could Claire do this? Claire has enough for two – she injects Victor, too. 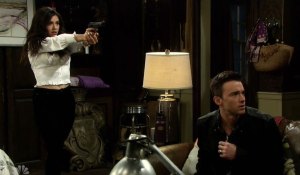 Marlena arrives at Ciara’s with the hockey mask on and a black jogging suit. Ciara pulls a gun while Will lets her in. Ciara apologizes and puts the gun away and goes to make Marlena tea. Marlena grabs the necktie, winds around her hand and strangles Will to death. Ben arrives and yells for Ciara when he sees Will dead. Marlena walks in the door and blames Ben for killing Will again. He assumes it was Jordan who has Ciara. 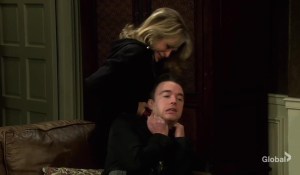 He runs off leaving Marlena in a huff. She takes out a gun and kicks Will’s dead body. Andre arrives and she shoots him in the head.

Ciara arrives at the townhouse. She yells for John and opens the door to find him dead on the floor. She grabs the baseball bat and leaves. 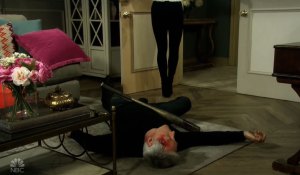 Nobody’s there except Claire…

In the DiMera yard, Claire and Jordan dig graves. Marlena arrives. Jordan is ready to kill Marlena when she says, “Shut it Tammy-Sue.” They’re a couple of amateurs. She tells them the Salem Stalker has returned and she’s proud of her granddaughter. Claire feels validated and hugs Marlena. She tells them to dig the hole deeper. She’s got a few more bodies in her trunk. Later, there are bodies all over including Ciara’s. Marlena calls them “The Charlie’s Angels of Death” and then they debate which of the angels they are. Ben appears and finds Ciara. He holds her dead body and cries out. Marlena tells him to stop whining. When Claire and Marlena point at Jordan as being the murderess, Ben strangles her and they toss her into the grave. “Nice work,” Marlena says, welcoming The Necktie Killer to the club.

Ben wakes up from his nightmare, startled. He tells Ciara about his horrible nightmare. 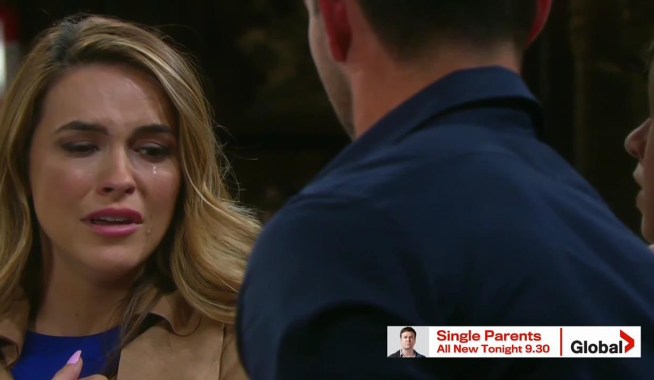 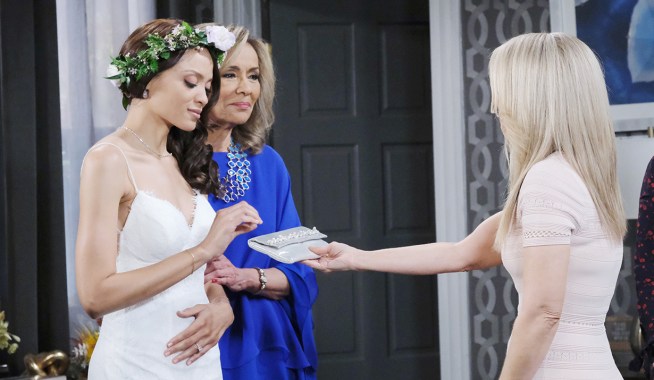