Monday October 28, 2019: On Days of our Lives today, Lani's shocked to learn Gabi means business, Jordan is horrified at Rafe's sickness, and Marlena can't believe when she hears Hope has a smoking habit. 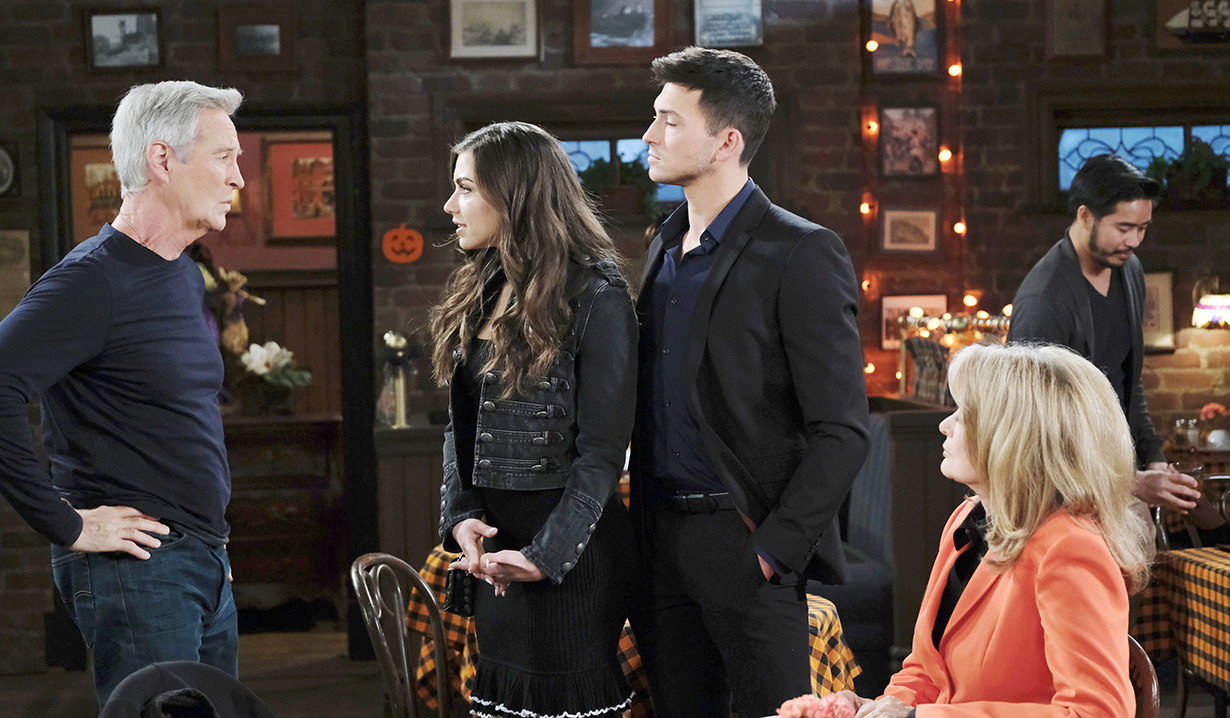 Outside the pub, Marlena snips to John that cigarette smoking is a disgusting habit and equally gross to toss the butt on the ground. She wonders who would do that. 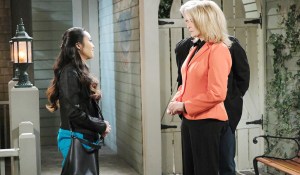 Haley pops up and says, “Ciara’s mother.” Marlena and John are puzzled. Haley says she asked her about it and Hope looked confused, said she didn’t smoke and dropped the butt and left. Marlena is astounded. John’s never seen Hope wear that shade of lipstick before. They head in for food and John recalls that Hope told him she heard voices while in the chapel. They guess she’s overwhelmed.

At Princess Gina’s loft, Rolf welcomes her majesty back. Gina and Rolf discuss her history with Stefano – some good, some bad. Rolf says he disappeared but the phoenix always rises. She learns that Hope Brady shot him. 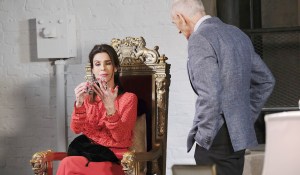 Gina asks what her “dismal doppelganger” is up to. She hears Hope’s ‘penniless and alone’. She asks Rolf to help her light up a cigarette but he says smoking causes disease. He gets some champagne instead. Gina’s dying to see John Black, the love of her life. Rolf reminds her the authorities are still pursuing her and says John’s married to Marlena. She never understood his attraction to “that commoner.” Rolf goes to get her chocolate. When he returns, she’s gone.

At their cottage, Ciara is feeling much better and apologizes for having to leave the party early. They talk about how adorable David is. Ciara calls Jordan’s cupcakes ‘next level’ and assume she has a secret ingredient in them. Ciara says her mom seems off somehow lately. They assume she’s stressed. They’ll invite her over to take care of her for a change.

Rafe collapses at home much to Jordan’s horror. Her gaze 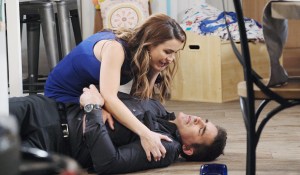 turns to the cupcake platter and she realizes Rafe must have been poisoned. “You couldn’t have eaten the cupcake meant for Ciara. That’s not possible,” she muses while calling 911. JJ arrives and pumps his stomach. As they wheel him out, Rafe wakes up. Jordan tries to stop them from taking him to the hospital but JJ insists Rafe goes.

At the hospital, Lani’s shocked and appalled when Gabi uses her app to force Julie’s heart into cardiac distress. From the window, Lani tells Gabi to stop it. Gabi will when she agrees to dump Eli. In Julie’s room, Julie worries something is wrong as her heart races. Eli calls Haley as Gabi turns down the app. Haley goes to get medication and closes the blinds on Julie’s window. Gabi calls it ‘intermission’. Eli comes from Julie’s room and Gabi fakes concern. Eli thanks Gabi again for donating Stefan’s heart to his grandma. “Sometimes you just have to be the bigger person,” she says. Lani shoots her an annoyed look. Eli also knows how badly Lani felt about shooting Stefan. He’s glad they’re past it and grateful to her for forgiving Lani. Gabi says she’d like 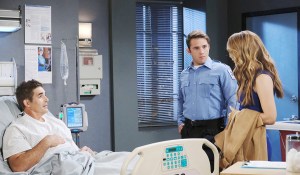 to be at the wedding. He’d love to have her. Eli goes into Julie’s room and Lani asks how she can hurt Eli this way. Gabi says it’s about hurting Lani. Lani asks what she’s supposed to tell him. Gabi says whatever it is, to make it convincing. Lani tries to reason with Gabi but it doesn’t work. Lani tries to bond with her over losing a loved one but that doesn’t go over. Eli returns and Gabi heads in. JJ arrives with Rafe and they wait for tests. Jordan appears after calling Ben and tries to stop the tests. Rafe says they already took his blood. In Julie’s room, Julie tells Gabi how grateful she is for her generosity and kindness. Everyone files out and Gabi continues her threats. In Rafe’s room, Haley tells Rafe he was poisoned.

Ciara arrives at the pub and overhears John and Marlena discuss Hope’s smoking habit. John explains Haley Chen saw her. Marlena questions how Hope has been. Ciara tells her about the random neck pain she’s had and how she seemed tired. They dine on burgers and Ciara says she feels much better. Marlena’s concerned so they explain she was ill after David’s party. She’s glad to hear that they’re in Jordan and David’s life but cautions Ben to be careful of Jordan pulling the rug out from underneath him. John and Marlena go and Ben gets a call from Jordan who asks after Ciara. She learns Ciara’s feeling better and disconnects. 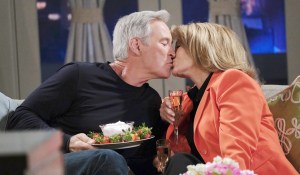 At home, John whips out the strawberries and whipped cream with champagne. They eat and ruminate over Ben having dinner with Jordan. Marlena’s worried Jordan’s playing Ben. They talk about Ben turning his life around and how they’re lucky to have found each other.  They kiss while outside, Gina arrives.

Ben and Ciara return home and make out. Ben leaves to do his security rounds, noting that the weather is nice for the trick-or-treaters tonight. Ciara picks up Ben’s coat and the vial of poison falls out. 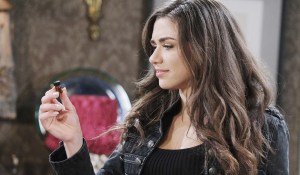 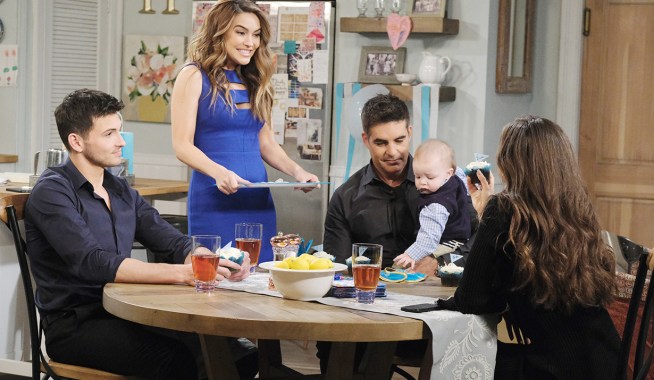 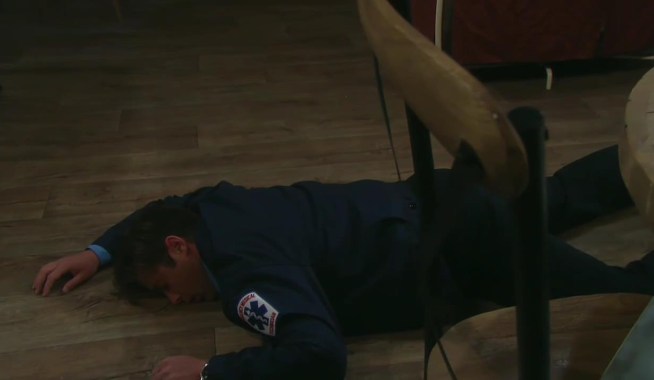