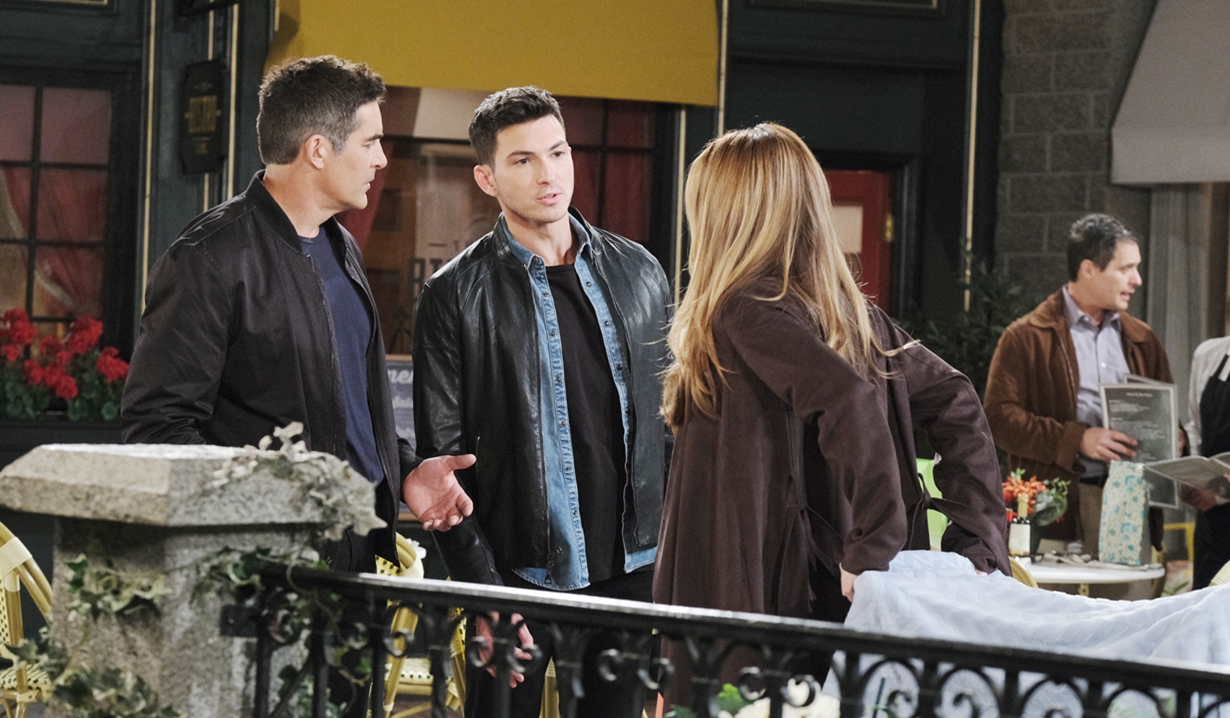 In the hospital chapel, Gabi reminds God she prayed to him to make Stefan whole again, and now the one person who loved all of her has been taken away. “Why do you hate me so much?” she sobs. She recalls going to church every Sunday as a little girl; but she’s lost what that little girl had. “I’ve lost Stefan, and I’ve lost you.” 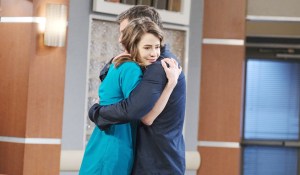 Sonny and Will enter. They confirm Julie’s still in surgery and hand her an envelope with Stefan’s personal effects. Gabi slaps it away. By the nurses’ hub, Eric presumes Sarah’s leaving town because of him. She flashes to learning she’s pregnant. Sarah thinks it’s best – seeing him with Nicole hurts. She assures him, “Wherever we end up, we’ll be fine.” Eric asks, “What do you mean ‘we’?” Sarah covers and Eric insists she keep in touch. They embrace and say goodbye.

Rafe catches up with Jordan, pushing the stroller, in the square. She invites him to join her to walk and talk. Ben appears and fumes he wants to talk about what she did to Ciara. They bicker about whether Jordan belongs in a hospital and Rafe interjects there’s no proof she was driving the car. Ben reveals Jordan stalked Ciara and cornered her in an elevator. Despite Jordan’s protests, Ben tells Rafe if he cares about Ciara, he needs to do something. Rafe gets a call – the driver who nearly hit Ciara was a drunk who’s confessed everything. He tells Ben to keep his distance. Jordan adds, “Amen.”

At the Kiriakis mansion, Victor questions Ciara’s late visit. Ciara mentions Julie and says she just wanted to see him. Victor laughs, “Before I croaked?” Talk turns to Jordan, and Ciara mentions her scary run-in with her in the elevator – she’s afraid of what she might do. Ciara steps out and Victor calls someone – he wants Jordan Ridgeway dead…tonight. Ciara reappears and Victor says there’s nothing he wouldn’t do to keep her safe. Later, Victor gets a call from Ben about the drunk driver and questions if he’s being paranoid about his sister. “Whatever you were going to do, don’t do it.”

In Eric’s apartment, Nicole confirms to Xander she knows Sarah’s pregnant and assumes Eric’s the father. Xander says Sarah confided in him about the pregnancy, and the father is Eric, but he doesn’t want Nicole to tell him. He explains Sarah doesn’t want Eric to know and plans to leave town. Nicole learns Xander sent Rolf, then changed his mind. She wouldn’t wish Xander on her worst enemy. Xander taunts that Sarah’s the one person who can take Eric away from her since he’s such a stand-up guy. 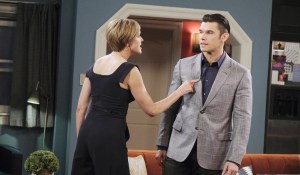 He adds if Eric finds out about the baby, he and Sarah will be bonded forever – where will that leave Nicole? He points out Sarah can give Eric a family; if he finds out it’s only a matter of time before he goes back to her…and their child. Nicole protests, but Xander suggests she forget she saw the envelope. Nicole shows him out as he urges her to keep her mouth shut. Later, Eric arrives. Nicole has something to tell him… Eric interjects that Sarah’s leaving and they said their goodbyes, then asks what she needs to tell him. Nicole replies, “It will keep. Come on, let’s go to bed.”

In her bedroom, Gabi contemplates her and Stefan’s bed as Will and Sonny bring tea. 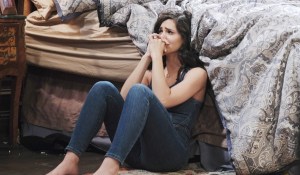 She wants to be alone. After, Gabi slumps onto the bed and cries. She flashes to kissing Stefan there, then sobs and throws things before sagging to the floor, sobbing. She asks, “Why did you give me your heart, Stefan, if you weren’t going to be around to love me with it?” She gets his wedding ring from his personal effects and curls up crying into her pillow.

At home, Ben disconnects from Victor as Ciara arrives. He updates her on the drunk driver. Ciara reassures him it made sense for him to accuse Jordan. She asks about the phone call and Ben fibs it was George from Stefan’s security team. They embrace as Ciara tells him they took Stefan’s heart; she’s so sorry. Ben thanks her; she’s his whole world. Ciara notes tomorrow they’ll know whether Julie was saved by Stefan’s heart.

At Rafe’s place, he leaves Jordan alone in the kitchen and she answers the door to a pizza delivery man in a black leather jacket. She didn’t order pizza. The man gets a text from Victor to cancel tonight’s order and leaves her the pizza. After, Jordan fills Rafe in…she guesses it’s her lucky day.

Sarah returns to the Kiriakis mansion where Xander learns she didn’t quit her job yet, but still intends to leave. Elsewhere, Victor receives a text the delivery was cancelled.

After an encounter with Hope, Kate is left perplexed.

Julie Is Shocked to Learn Gabi...