Monday October 14, 2019: On Days of our Lives today, Xander imagines possible outcomes of his plot, Nicole and Eric have an unexpected visitor, and Anna is caught off guard. 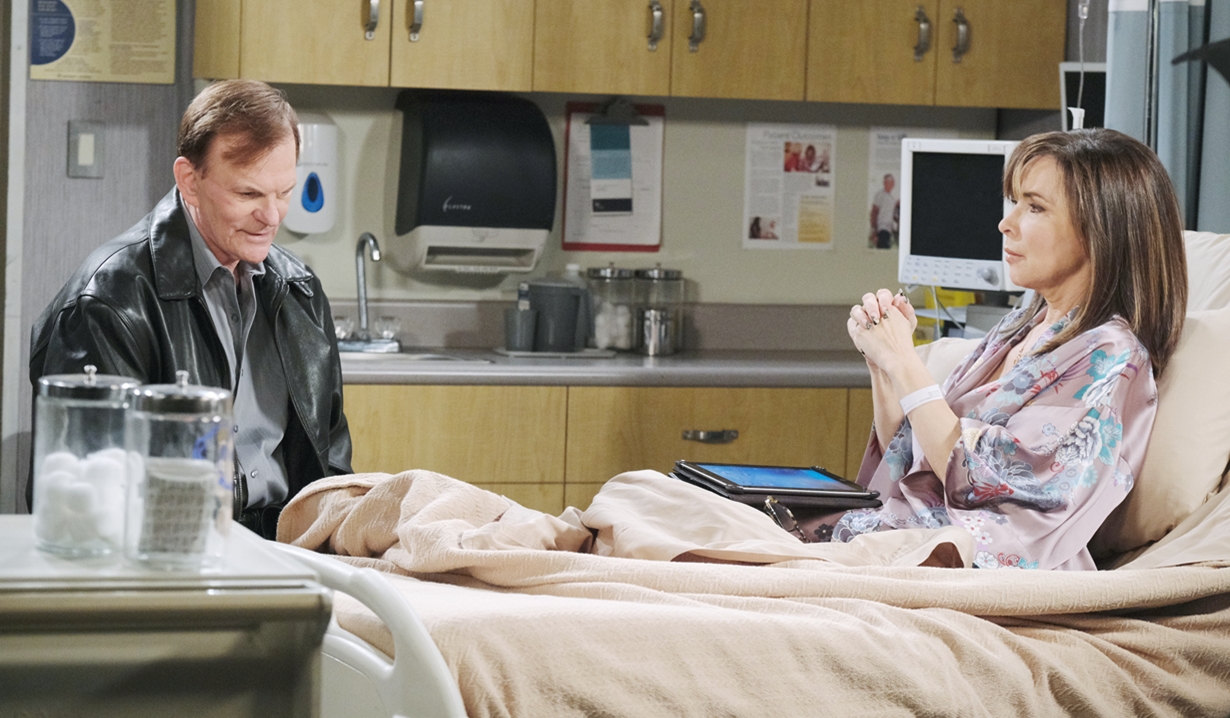 In their suite, Anna and Tony share a champagne toast and she presents him with the engagement ring she bought Roman to give her to make Tony jealous. She wants Tony to pop the question. Tony won’t propose with that ring and suggests she try a little patience. They laugh and canoodle until Anna leaves. Once alone, Tony takes a call and says, “Yes, I’m Anthony DiMera.”

Eric enters his apartment and Nicole advises that Holly is with Maggie and reveals a sexy negligee. They’re making out on the couch when Marlena knocks then uses her key. Marlena enters as they scramble and awkwardly wishes Eric a happy birthday. Nicole invites her to stay and goes to change. 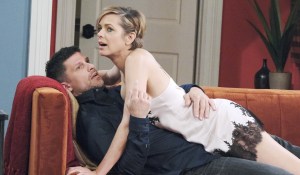 Marlena updates Eric on Julie’s transplant – Sarah’s scrubbing in. Nicole hears her ask if Eric thinks about Sarah. Eric has thought about her, especially since he had the mistaken idea she was pregnant. Nicole joins them and Marlena goes. Nicole worries about his feelings for Sarah, who could give him children. She wonders if he’d have gone back to Sarah if she’d been pregnant. Eric wouldn’t walk away from his child, but wouldn’t leave the woman he loves either. Nicole notes he left Sarah when she returned; what’s to stop him from doing the same to her? Eric loves Nicole more deeply and says nothing will change it.

Roman visits Kate in her hospital room and notices her flowers from Dr. Rolf. Kate hopes he expects nothing in return. They appreciate that Roman and Will are alive thanks to Rolf, but Katie wishes he hadn’t saved Vivian. Talk turns to Julie and Roman wonders how she’ll feel about getting that psychopath Stefan’s heart. Kate snarks sarcastically about it affecting Julie’s sparkling personality. She relays she’s tired of being hospitalized but is distracted to hear Kristen is focused Brady. Kate enthuses that Victor will be apoplectic and fire Brady – Roman’s made her day! Elsewhere, Hope is experiencing murky flashbacks of herself when John appears and says her name. 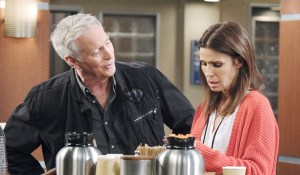 Hope admits she’s exhausted and they discuss Julie going to the OR soon. She tells John when she was in the chapel praying, she thought she heard a voice but no one was there. John thinks maybe it was God’s voice and they hug. John hands Hope the rosary she dropped, and she tells him Rolf found it before. John learns he’s been hanging around and wonders what he’s up to. Marlena arrives as they remember what Rolf did to each of them. John and Marlena convince Hope to go eat with them. In Kate’s room, she’s visited by Tony, who learned his brother was taken off life support. He tells her Mr. Chin called him to take over for her as CEO. Kate replies, “Over my dead body.” She rants. Tony reminds her he’s never been interested in running DiMera. Kate demands he call Chin and tell him that. Tony demurs that Anna has expensive taste; a job would be helpful. Kate feels he’s unqualified and fumes as he exits. She calls Chin herself to say there’s no need to install Tony, but is displeased with his response.

At the Kiriakis mansion, Dr. Rolf questions Xander sending him to tell Eric about Sarah’s pregnancy and scoffs that it could blow up in Xander’s face. Xander’s certain nothing could make him leave Nicole. 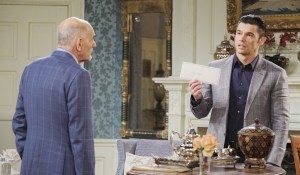 Rolf asks what the delivery is worth to him. Xander imagines Sarah telling him she’s staying in Salem so they can live happily ever after, then kissing him. Xander replies, “Name your price.” Rolf doesn’t want money, but there is something else – Rolf needs a new lab for a top-secret project he’s working on. Xander’s concerned about what he’s up to, but agrees. Once alone, Xander imagines Sarah telling him Eric has left Nicole so they can be together and looks concerned. He then imagines her being furious with him for Eric finding out about the baby, and decides he must stop Rolf.

In the square, Anna returns the engagement ring to Roman and says, “Roman Brady. 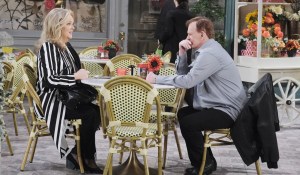 Please do me the honor of not marrying me.” She explains when Tony first came back he was acting like a DiMera – she won’t have that. Thank goodness he wants nothing to do with his family. Roman asks about her wedding plans. She’s thinking France, but is just glad he’s back and they both want the same things for their future. Later, Hope, Marlena and John run into Dr. Rolf. Hope thanks him for returning the rosary. He learns she has nothing else to say and bundles off. Hope changes her mind about eating with Marlena and John.

In their suite, Anna is dismayed as Tony updates her on his job as CEO of DiMera Enterprises.

Brady bonds with Kristen over the pregnancy.

Gabi Forces Lani to Beg For...