Jack Kills Dr. Shah During a Knife Struggle and Reunites With Jennifer

Friday September 27, 2019: On Days of our Lives today, Vivian celebrates, thinking Kate's dead, Kate learns that she was in a coma after awakening, and Kristen is shocked to hear she's pregnant when she's always been told she could not conceive. 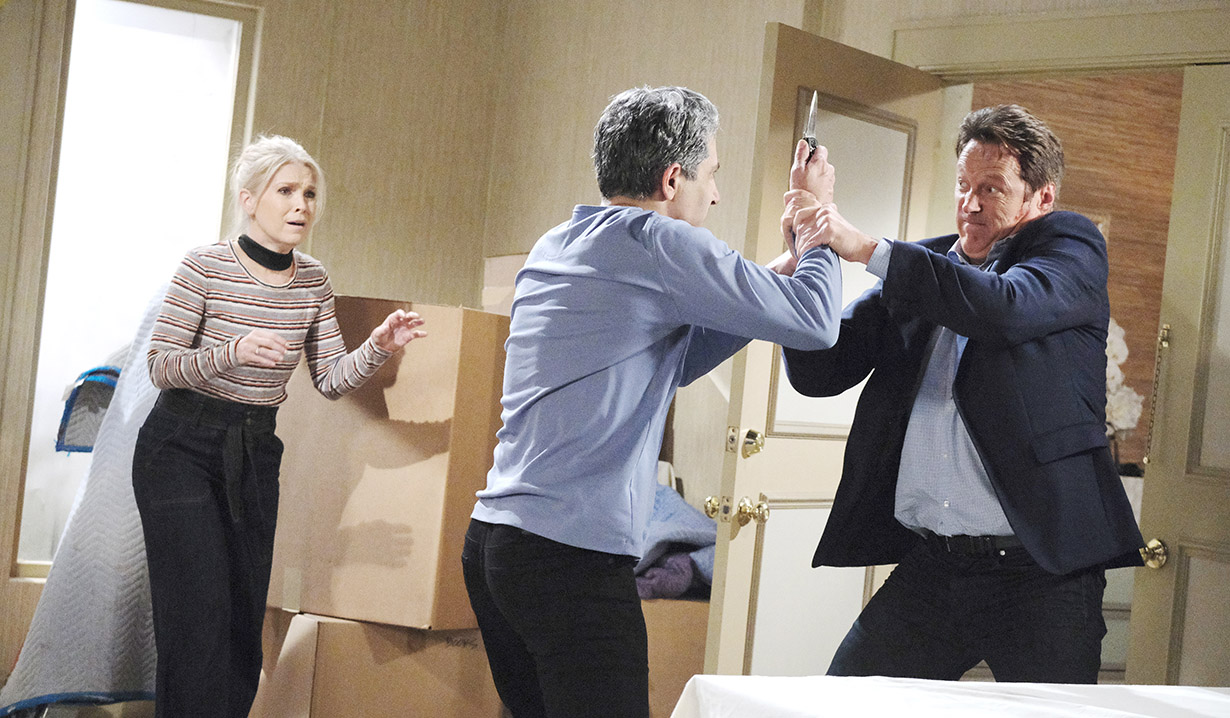 At the DiMera mansion, Vivian’s in a great mood after hearing that Julie is getting 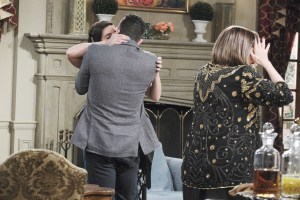 Kate’s heart. It means Kate can’t finger her for the shooting. Stefan doesn’t jump for joy over the news. If Kate dies, Gabi won’t be happy – also, Kate’s Ari’s great-grandmother. Vivian doesn’t care. She calls Gabi a gold-digger and would rather her son was matched up with Eve Donovan. Vivian wants Gabi gone. Gabi appears and tells her that getting rid of her won’t help. Will and Sonny suspect she shot Kate so doubts Vivi will get away with this. Gabi calls Vivian ‘dumb’ for thinking Stefan would cheat on her. She says, “You’re pretty much my bitch now.” Vivian’s offended and tries to get her son to take her side. Stefan ignores her and talks about dinner plans to his wife. When Vivian won’t shut up, Gabi starts counting at her the way she would with Arianna when she’s naughty. Stefan knows how to shut both up. He kisses Gabs and Vivian clutches her head then runs off.

Kayla, Lucas and Will are shocked when Kate wakes up before surgery at the hospital. Kate wonders why they’re all crying and learns she was in a coma and were told 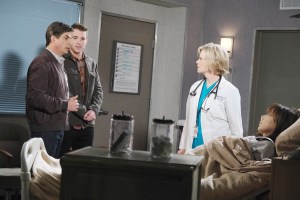 that the chances of her regaining consciousness were slim. Kate begins to cough. She’s confused and the lights begin to give Kate a headache. She’s wheeled back into her room and Lucas wonders how he’s to explain that he was about to donate her heart to Julie. “She’s gonna kill us.” Will retorts, “What do you mean – us?” They head into Kate’s room. She’s asleep and Lucas lashes out at Kayla for telling him that his mother had no chance of living. Kate wakes up and has more questions. Kayla tells her she was shot. Kate asks who the shooter was. She can’t recall anything from that night. Kayla explains it’s due to Retrograde Amnesia and she may never remember.

At the clinic in Brookeville, Kristen’s shocked to learn from Dr. Rolf that she’s pregnant. She says it’s impossible. Rolf reminds her with him, “all things are possible.” He knows fertility treatments while in Nashville helped. Later, Rolf and Kristen are gone when Sarah wakes up. She asks if it’s over. Xander lies that her doctor had an emergency and wasn’t able to perform the abortion. Sarah goes from shock a new decision not to abort, she says because she thinks this is a sign. 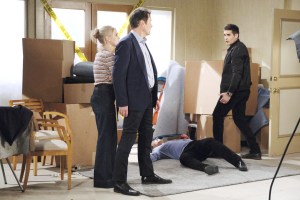 after he hits his head. He flashes to marrying Jennifer, the love, and tells Jenn he remembers her. He sees Shah get up and go for the knife. Jack launches himself at Shah and they struggle for the knife. The knife goes into Shah’s heart and he falls to the floor and dies. Jack feels for a pulse and his eyes widen. “I killed a man.” They talk about his memory returning. Jack knows that her badgering caused him to remember, not the fall. He quotes the poem that Jenn wrote for their wedding and Jenn cries. They laugh over all of the memories of the kids and the life they had. Jenn corrects him – “the life we have.” They embrace happily. Rafe shows up and Jack explains everything.

At Kristen’s room at Salem Inn, Kristen tries to get used to the idea that she’s really carrying Brady’s child. Rolf tells her to get plenty of sleep and eat healthily. No “hanky panky” he says. Kristen gasps at the thought of being celibate for 9 months. She throws Rolf out and calls Brady.

In the square, Jack worries that JJ will be angry with him for lying about 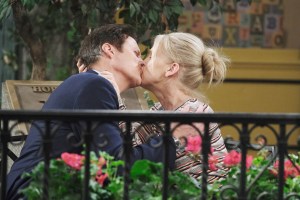 where he went. He says JJ’s a good guy. He breaks down thinking of that and Abigail. He tells Jenn he was an unfeeling jerk and Abs was so sweet. Jenn knows the kids will be excited that he has remembered. They reminisce and get close but Jenn pulls away to call JJ. After the call, Jack and Jenn kiss.

Back at the hospital, Rolf eavesdrops as Kayla explains to Lucas that Kate surviving was a miracle. Rolf flashes back to telling an unconscious Kate that he had a softs spot for her since she married Stefano. He injected Kate with something in her IV and said, “That’s better.” In Kate’s room, Will tells his grandma that Vivian’s alive and they suspect she shot Kate. Kate flashes to when it happened and gasps. Vivian shot her! Rafe arrives. He got a call that she was awake and can’t tell her how happy this makes him. Will blurts that Vivian shot Kate.

Jack reunites with his son.

Jack Remembers His Life, Kristen Is...