Wednesday September 25, 2019: On Days of our Lives today, Julie learns from Maggie by accident that Jenn's missing, Jennifer makes an attempt to get Shah to trust her but it only makes things worse, and Sarah prepares for her abortion. 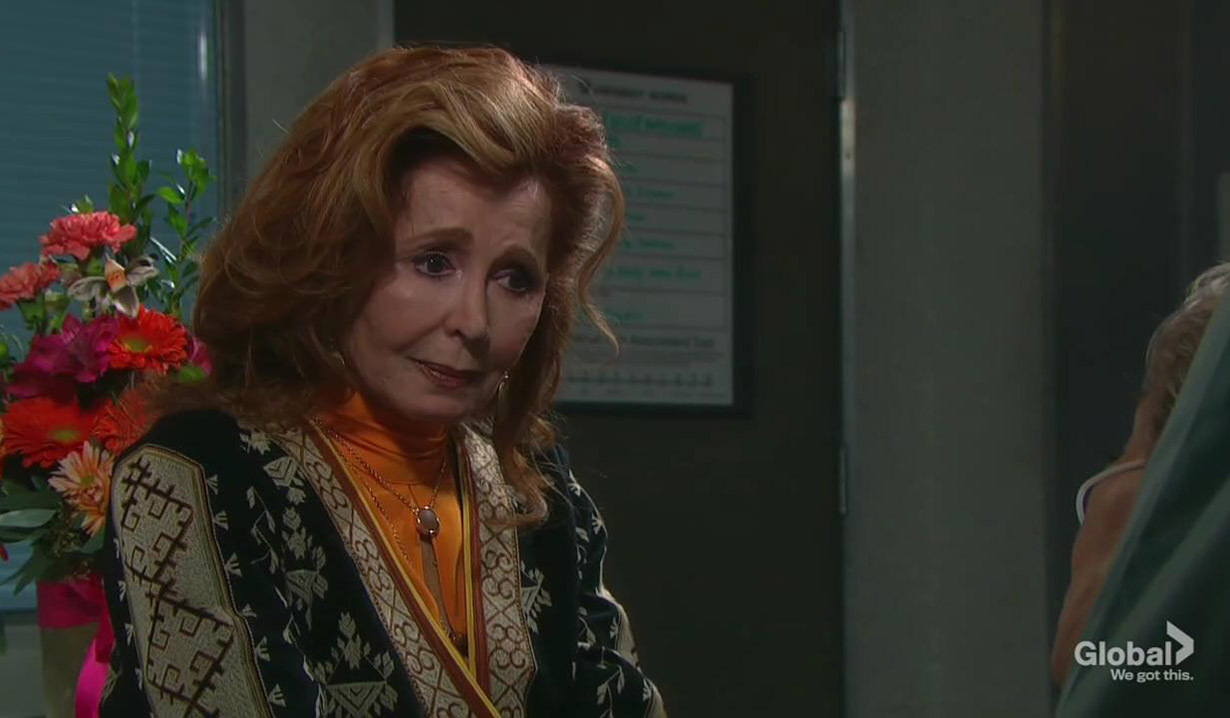 Eric wakes up on his sofa with a start, thinking he heard Holly crying. Nicole says Holly’s fine. In fact, she 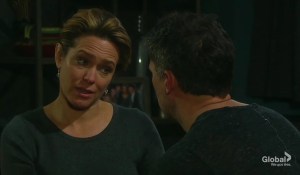 wants to pick out her clothes for preschool. Nicole talks needing work and jokes about putting Kristen’s time at DiMera Enterprises on her resume. Eric offers her her old job at the Horton Center. Unless she worries she’ll get sick of him. She laughs and kisses him. That’ll never happen.

At the Kiriakis mansion, Xander whines to Kristen about blackmailing him. Sarah appears and he disconnects. He took time off this morning. He can’t let her go through this alone. Maggie walks in and asks what he means. Xander covers. Maggie hopes he’s not hitting on her. She has a soft spot for him, “But I don’t have amnesia.” She goes to the hospital to see Julie while Sarah whines that her mama can never find out the truth. Xander promises nobody will ever know about the abortion.

Eli visits Julie in the hospital. He begs her to fight.

Jack barks at Lani at SPD about finding Jennifer. Lani says Eli’s been searching for her all night but he stepped out to visit his dying grandmother. Jack snipes that there’s nothing he can do about that but he can do something to ensure Jenn stays alive. Lani calls Eli, apologetic. “Our idiot mayor is here freaking out,” she says. She needs him there. Eli disconnects and Julie asks why Jenn hasn’t visited. Eli makes something up about her being with Jack. Julie starts getting upset and he tells her to can it. Rest. 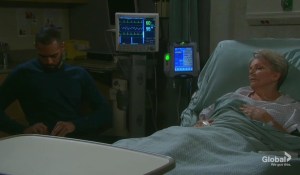 He leaves and Julie can tell he’s lying to her. She’ll find out on her own. She calls Haley into her room and asks where JJ is. Haley claims he’s busy. Julie says she knows it’s because of Jennifer and begs her to tell her what’s going on. Haley says nothing and goes. Maggie appears with what she calls “Obligatory flowers and some trashy magazines.” Julie asks her not to be upbeat. She’s her oldest friend. She wants Mags to be straight with her. Maggie calls her grumpy and Julie complains that everyone is pretending she’s not dying. Maggie’s uncomfortable. Julie asks her friend to look after Doug for her. Of course Maggie will but Julie wants her to take her place. Maggie reminds her she’s married to Victor. Julie says sex isn’t the issue. She wants her to divorce Vic first. It’s not like it’ll work out anyway. “You’d be marrying up!” Maggie thinks she’s out of her mind and cries as she says nobody could take her place with Doug. As they talk, Julie tricks Maggie who lets it slip that JJ and Jack are looking for Jennifer because she was kidnapped. Julie immediately gets worked up, screaming in devastation.

At what appears to be Ted’s old suite, Jenifer screams for help but Dr. Shah tells her nobody’s coming and 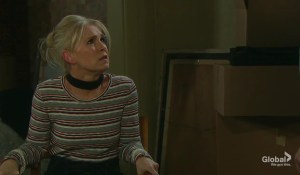 they’re leaving Salem soon. She’s grossed out by his touch. She’ll never want him. He says he’ll wait and reminds her he’s in charge. Jennifer apologizes for hurting him. She tries to get him talking – she thought she knew him as a man in control but realizes how angry he is. Henry agrees he’s been angry for as long as he can remember. He tells her all about how his mother went on dates with awful men and after they broke her heart she’d go on drinking binges. He was happy when she told them it was just the two of them, but it never lasted until some new guy came in and took her away from him. “Like Jack took you away from me,” he says, gun in hand. Jennifer tells him she’s realized she misjudged him and hurt him. She’s sorry. She tries to manipulate him into thinking she cares but he sees through her. He says it’s like a repeat of what happened with his mom until the end. Jenn asks if he hurt her. He says she died naturally but then laughs and shrugs, telling her that he could be lying. Jenn begs him to untie her so she can show him her feelings for him have changed. Shah unties her and holds a knife to her throat.

Back at SPD, JJ thanks Jack for searching for Jennifer. Jack brushes him off and tells him not to read into it, but when JJ’s not looking, Jack shoots him a look that seems to say otherwise. Eli appears. He’s got the airports covered. JJ has learned that Shah’s got a clean record. Jack’s exasperated and runs to “rattle some cages.” Eli gets a call from Maggie who says Julie just had another heart attack. He goes and Jack returns. JJ tells him Ted Laurent was Shah’s attorney in a neighborhood dispute…

At the square, Nicole and Eric canoodle and talk about how Holly loves him. They run into Xander and Sarah and everyone looks as if they’d rather be somewhere else. They attempt polite small talk and Nic asks where they’re off to. Xander says it’s none of her business. Eric gets angry so Sarah drags Xander away. Nicole asks Eric to let Sarah do what she wants.

At the hospital, Sarah’s gowned-up as Xander asks if she’s having second thoughts.

Jack and Shah have it out.

Lucas Will Donate Kate’s Heart to...

Jack Remembers His Life, Kristen Is...