Thursday August 29, 2019: On Days of our Lives today, Eric and Jennifer work together to convince Jack to make a deal with the devil, Chloe leaves Salem for a job, Eric makes demands of Melinda, and Tripp goes off to medical school. 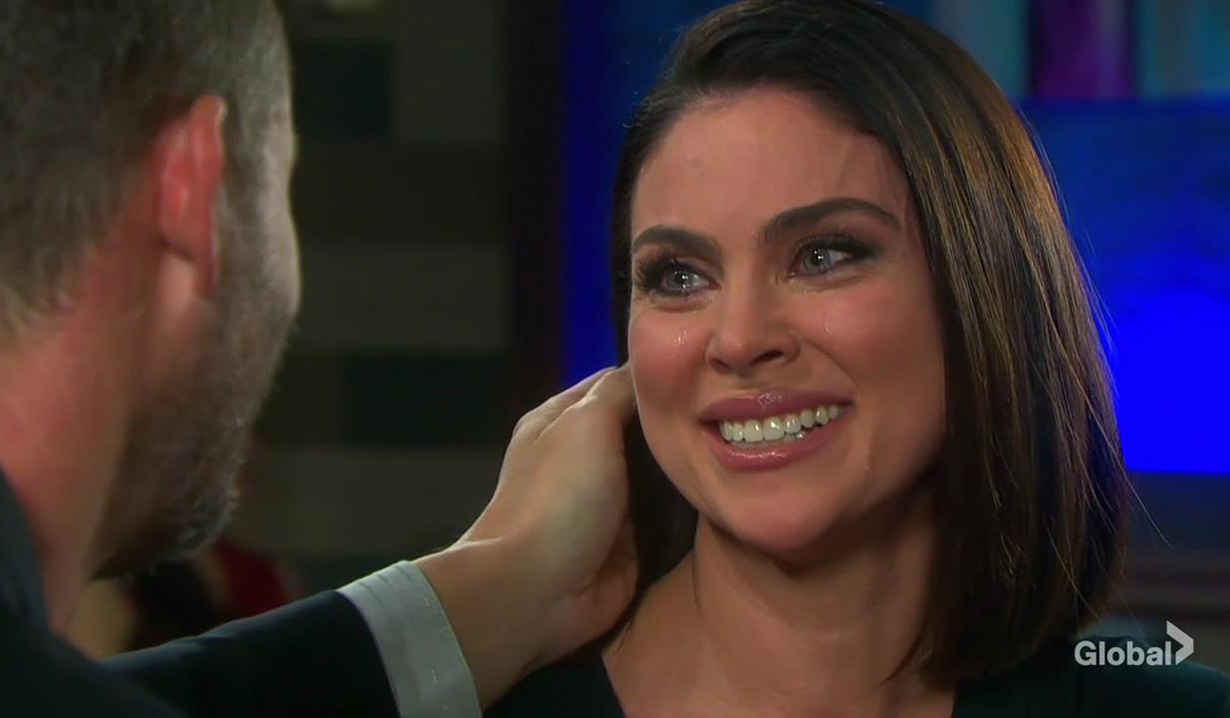 Chloe stumbles into Doug’s Place and tells Brady she’s exhausted from taking the red-eye back from New York City. She asks if Brady’s parents were surprised by the anniversary party. Brady says they all were. Later, Brady has told Chloe the 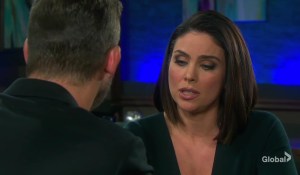 full story about the big Kristen reveal. Chloe’s shocked. She finds it freaky that he had sex with Kristen. Brady doesn’t want to talk about that but he does tell her that Nicole and Holly are alive. Chloe rants about how awful Kristen treated her pretending to be Nicole. Brady says Kristen told him there’s a part of him that still wants her. Chloe gets a call and tells Brady that she got the job in New York City. Chloe worries about leaving since Nicole isn’t found yet but Brady talks her into returning to New York as Nadia Bjorlin’s last airdate is today. They embrace and Brady complains about having to sit through an entire season of opera.

At the pub, Hope brings Jenn a chocolate cake and they groan over all of the signs that Kristen was back in Salem and that Ted was somehow involved. They rehash things and agree that Ted got into this mess himself but Hope believes Ted truly loved her. Jenn doesn’t look convinced. Talk turns to Jack. Jenn thinks they need to find Rolf so he can give Jack his memory back.

At the hospital, Jack tells Kayla on a call that he’s glad that both DiMera siblings are in jail. He disconnects and asks Kayla for help. Eve’s suing him for wrongful termination. Jack knows that the hospital has video footage of her going into 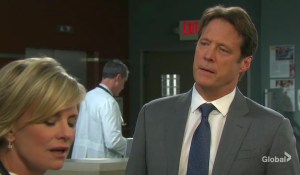 Seth Burns’ office the night the diary went missing. Kayla says he needs a warrant but she makes him a deal. She’ll help if he starts treating Jennifer with the respect she deserves. They argue and she thinks he’s afraid to get his memory back. She goes to get the footage.

At the loft, JJ and Haley have packed to move in with Melinda. JJ hopes she and her mom can bond. Haley says she’s not the maternal type. Tripp arrives. He asks them not to move. He’s moving to California to go to medical school. He was waitlisted so only heard back now that a spot opened up. JJ and Haley congratulate him.

Eric goes to see Melinda at SPD. He wants her to give Kristen immunity so she’ll spill about Nicole’s whereabouts. Trask refuses. Not only does Kristen need to pay for her crimes but Trask doesn’t believe Kristen’s being honest about Nicole. If she is alive, there’s no indication that she’s in trouble. She’s done debating this and kicks Eric out. Eric reminds Melinda that two people risked their lives so that her daughter didn’t go to jail. Trask calls that ‘different’. If she lets Kristen go all hell will break loose again. Jack shows up and argues with Eric about giving Kristen immunity. Jack refuses. Eric says everyone in town thinks he’s a “spineless little worm” and this is a chance to change their minds and give Nicole a chance. Jenn strolls in and helps Eric. She thinks they can find Rolf too. He’s the only one who can help get Jack’s memory back.

At the Kiriakis mansion, Xander can see by the look on Sarah’s face that she learned about Nicole. 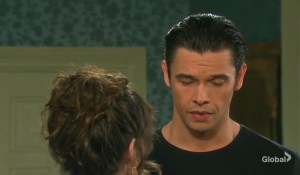 He guesses that Eric dumped her. Sarah slaps him across the face and yells, “The hell you are.” She yells at him for gloating but Xander denies he’s doing that. Still, Xander knows Eric will be done with her once Nicole’s revealed. Sarah demands to know where Nicole is but Xander has no idea. Kristen wouldn’t share that. He’d tell her if he knew. He cares for her. He wants to be with her and says she won’t be second best while Eric will be moving heaven and earth to find Nicole. Sarah cries and realizes she’s acting as if she doesn’t want Nicole to be alive. Maybe she and Xander are more alike than she thought.

Tripp goes to Kayla at the hospital and tells her that he loved working at the hospital. He wants to be a doctor like her so applied and got into medical school. Kayla knows. She gave the school a rave review when they called her. Kayla’s happy for him but she’s worried he’s running from his feelings for Haley. 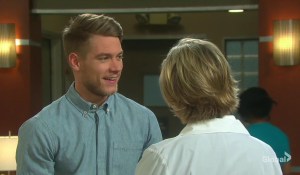 Tripp laughs but he’s leaving anyway as this is Lucas Adams’ last day on Days of our Lives.

Melinda drops by the loft to give Haley her keys but is told that Tripp’s moving and they’re staying. Melinda sternly tells them it’s a relief “not to have my house turned upside down.” She has to get back to work. She takes off and Haley shakes her head. They both assume her mother was disappointed.

Melinda runs into Hope in the park and gives her a letter from Ted, found in his personal effects.

Kate moves into the DiMera mansion. 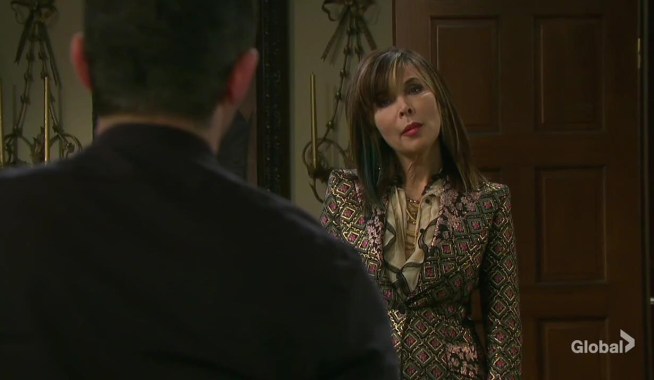 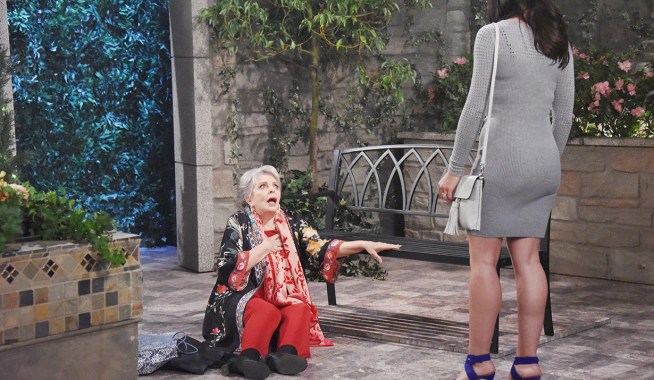