Xander Is Shocked to Learn Ted Laurent Is Dead

Tuesday August 13, 2019: On Days of our Lives today, Anna melts in Tony's arms, Xander learns of Ted's death, and Eric and Sarah share a romantic night. 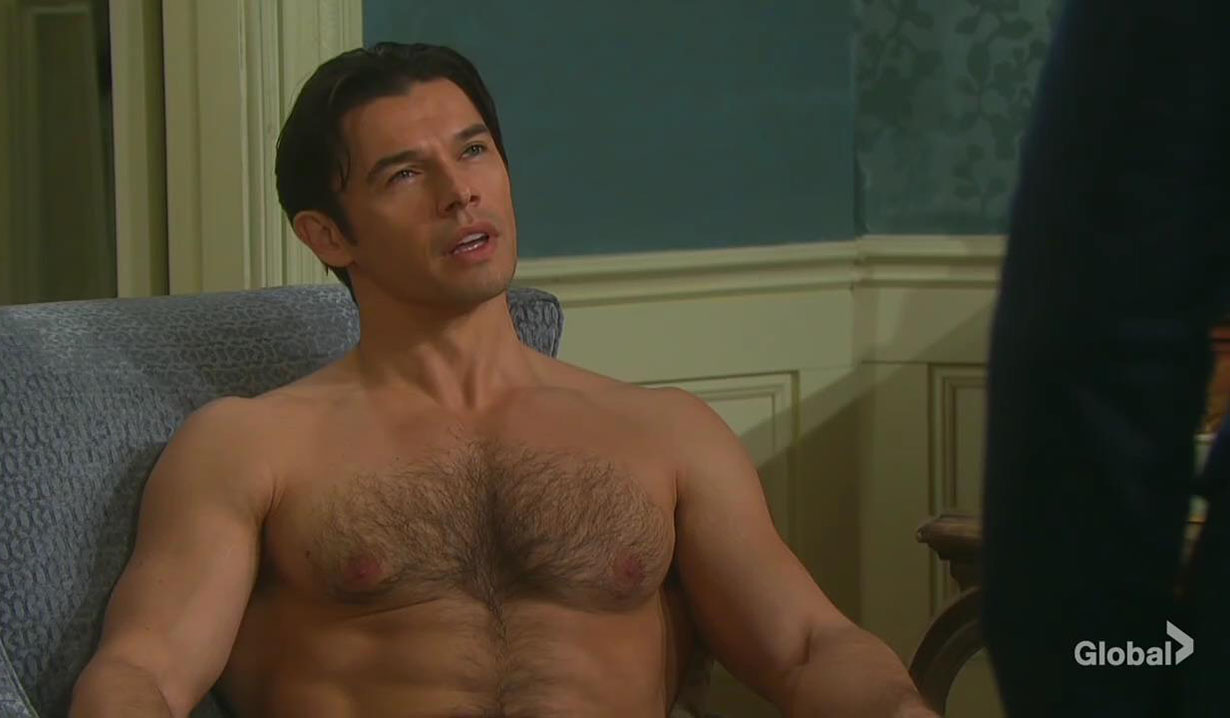 At home, Xander looks at Sarah’s photo and thinks about her. Sonny and Will appear. Will asks for a comment for his article on Ted Laurent’s murder. Xander’s shocked. He has no comment so Will asks if he knows who killed Ted. Xander flashes to Kristen and says Will or Sonny or Kate are good suspects. Will asks why Ted accused Xander of kidnapping him from the pier but there was no video of it from the security cam?

Eric’s got a romantic evening prepared for Sarah. She arrives at his place and they kiss. He stirs his sauce and they talk about Rex. They talk about their future and having a reboot, then kiss some more. Eric stirs sauce into the pasta and Sarah argues about how it should be prepared. With or without sauce. She rubs sauce into his shirt as they banter and he does the same to her. They wind up kissing.

More: Lucas Adams out in August

Anna bumps right into Tony outside Salem Inn, at the square. Tony’s overcome with emotion and smiles. “Anna. My Anna.” Anna hauls off and slaps him across the face. He protests so she hits him a few more times for keeping her in the dark about his return from the dead, for sleeping in Kate’s room and marrying Nicole.  Upstairs, Marlena arrives at “Nicole’s” room.

At Doug’s Place, “Nicole” texts Brady. She can’t wait to see him. 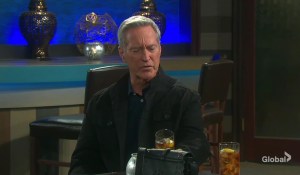 John tells his son he’s planning a surprise for Marlena for August 22, his 30-year anniversary with Doc. If it wasn’t for Kristen, they’d have remarried the same day. Brady hears Kristen’s name and flashes to her talking about her tattoo. He tells his dad he’ll do whatever he can to help with the party. He goes as Hope arrives. She needs John’s help. She tells him the story of all the money she found at Ted’s, the woman who dropped the hundred dollar bill and threw away the diamond necklace. John agrees to help her find out who the woman is and if she’s Ted’s killer and Ted and Kate’s kidnapper. Her main suspect is Nicole. John knows Nicole Walker is incapable of murder. Later, they talk about John’s romantic surprise.

Tony and Anna walk to the park and talks about all the grieving she did. 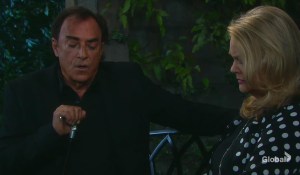 “I shot Steve,” she exclaims. Tony tries to explain that after Rolf’s warehouse caught fire, he barely made it out alive. He was eventually able to regain strength and courage to call her. He wanted to see her, touch her and hold her. Anna still thinks he’s a bastard. Tony tells her she’s still as beautiful as ever. Talk turns to Brady and why “Nicole” married Tony. He explains it’s so Nic can become CEO of DiMera. Anna begs him not to get sucked into DiMera issues. That’s what killed him the last time. He begs to differ. She tells him to take over the company himself but he doesn’t want to. He says he saved her life in the warehouse and feels responsible. Anna tears up. She’s always loved that about him. Tony only wants her. They kiss and canoodle. Anna talks about how unsettled she’d been all these years and here he is. Tony’s so sorry. When she asks him to divorce Nicole, he’s sorry but he can’t. He explains why. This upsets Anna further. She stomps off when he can’t give her what she wants.

At Salem Inn, Kristen hears Doc’s voice and grabs her gun. “Let’s play,” she whispers. She opens the door and Marlena gasps and tries to run. Kristen brandishes her gun and shoots Marlena. Marlena goes down. Kristen hears a knock. She snaps out of her daydream and puts on the Nicole mask and answers. Marlena hopes she knows how heartbroken she is over Holly. She offers to talk so “Nicole” lets her in. She talks about her grief and blames Eric. Marlena knows Eric loves Nicole and she must know he wasn’t responsible for her death. They discuss her marriage to Tony. “Nicole” says she did it for Brady and asks her to stay out of her private life. Marlena argues that it’s crossing over with her family. “Nicole” calls her sanctimonious. Marlena ignores that and calls Brady vulnerable. “Nicole” slyly pulls out a gun, tired of the conversation. Marlena doesn’t see it so she threatens to call the cops when Brady shows up. Marlena leaves and “Nicole” kisses Brady. He tells her that kissing her is “familiar, but different, too.” He doesn’t get it. “Nic” asks him to ignore that and enjoy the ride so they make love.

Marlena joins Hope and John at Doug’s Place. John tells her he and Hope are working on a case together. John goes to take a call and Marlena tells her friend about the surprise she’s preparing for John. 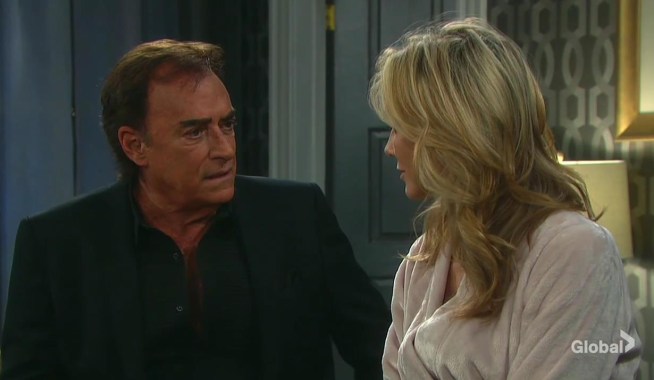 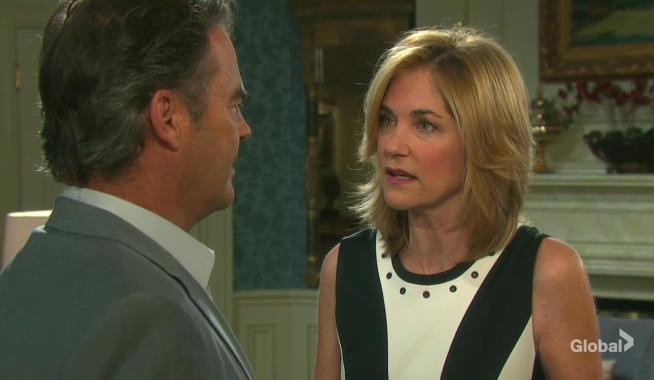