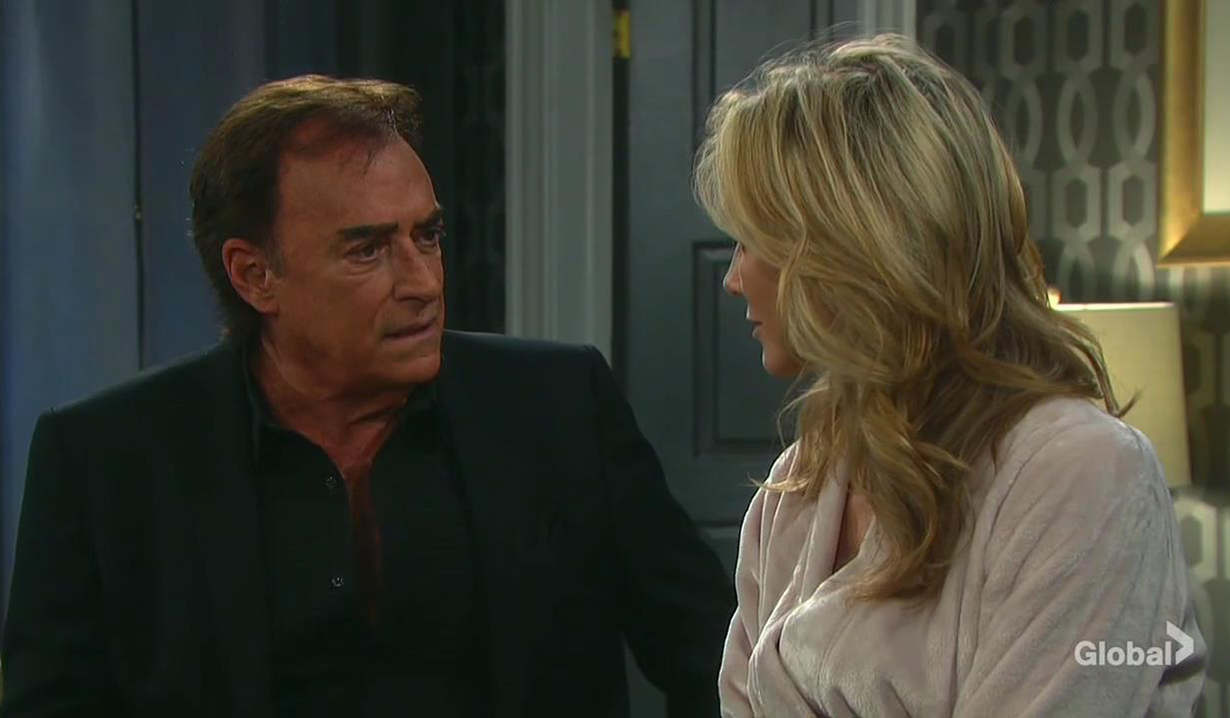 At the gatehouse, Ciara is apologetic for burning Ben’s steak. She must have inherited her cooking skills from her mama. Ben kisses Ciara and tells her the steak is perfect. They discuss possible reasons why Gabi and Stefan married and 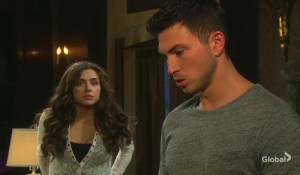 Ben wonders where this leaves him. Gabi knows his loyalty lies with Stefan. Ciara worries she may hold a grudge from when he kidnapped her. Gabi calls. She asks Ben to increase security because Stefan snuck onto the property. Stefan shows up. Ben lets him in and is sorry Gabi double-crossed him. Stefan wants Ben to investigate Hope. Ciara asks why. Stefan reminds her she shot his father in cold blood. She has it in her to shoot someone when she feels wrong. Ciara scoffs. She won’t let Ben investigate her. Ted had a lot of enemies and anyone could have killed him. “Including you.” Stefan clarifies he wants something Hope said investigated – all the money Hope found at Ted’s. Stefan tells them about Hope finding a hundred dollar bill from that mysterious woman in the park and then finding that diamond necklace in the trash can nearby. Ciara’s seen the necklace. They ponder who the woman is and why she tossed the evidence. Ben vows to find the woman for Stefan.

John arrives at Marlena’s office. Marlena’s stunned to hear Tony DiMera is alive, wondering how it’s possible. John says Dr. Rolf brought him back. John tells her the story about how Nicole married Tony. “What about Anna?” Marlena yells. 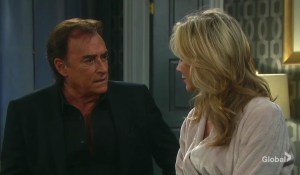 She’ll have a fit if she hears this. Neither understands why Nicole would marry Tony. She worries about Eric. They head to lunch to ruminate over it.

At Salem Inn, Tony and Kristen argue about DiMera Enterprises and Anna. Tony can’t get past being married to his own sister or her “twisted plan.” Kristen asks him to be patient. Once she’s CEO, they’ll divorce. She reminds him she saved his life. Tony’s grateful for that but needs to see Anna. Kristen threatens his life if he tries. Tony holds his hand to his chest and pants a little, horrified about hurting Anna. Kristen tells him to can it.

Anna returns to Salem and greets Roman and Kate. She wrongly assumes they’ve reunited but they set her straight and then ask why she’d care. What about Tony? Anna says he’ll always 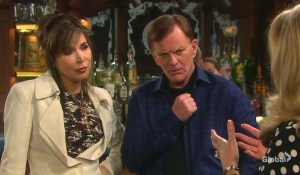 be in her heart but it’s time to let Tony go. She takes out the cocktail shaker urn. Kate and Roman are shocked. That’s a murder weapon. Anna says the cops gave it to her. She’s going to have his ashes interred into the mausoleum. Roman explains that the ashes aren’t Tony’s because he’s alive. Anna doesn’t believe it. Kate’s seen him. He spent the night with her in her hotel room. Anna’s eyes narrow. “He did what?” Kate says it was on the up and up. She felt sorry for him because he had no place to go. Anna asks why he didn’t reach out to her. Kate reveals Nicole married him so Anna learns they’re at Salem Inn and rushes out. Later, Kate sips a dirty martini and she and Roman talk about Anna’s eccentricities.

At Doug’s Place, Chloe asks Brady why he’s looking at a photo of Kristen on his cell phone. Disturbed, 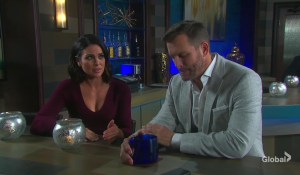 Brady can’t get her out of his mind. Brady tells Chloe about Nicole marrying Tony DiMera so Nicole could become CEO of DiMera. He shares the full story and touches on them having sex. Chloe thinks that’s too much information. Brady can’t get Kristen’s tattoo out of his head. Nicole has scar tissue in the same place where Kristen had her tattoo. He’s just wondering…John and Marlena interrupt. They’ve questions about Nicole. Later, Marlena takes Chloe aside to ask to book Doug’s Place for their 30-year anniversary. Chloe happily books it. Marlena wants to surprise him for once. Chloe asks Marlena to talk to Nicole, to guide and support her since she won’t listen to Chloe. Marlena agrees to it since she too is worried about her. Nearby, John blurts, “You slept with Nicole?” Brady says it was “oddly right.” He thinks things between them could be different. John asks his son to be careful and then goes to Chloe and privately asks if she can book the restaurant for his anniversary. Chloe smirks, knowingly.

Anna bumps into Tony on her way into Salem Inn, while inside, Marlena knocks on “Nicole’s” door.

Anna goes off on Tony.

Faux Nicole loses it with Marlena.

Xander Is Shocked to Learn Ted...