Thursday August 1, 2019: On Days of our Lives today, Eric gets a shock, Hope discovers something at Ted's place, and Sarah calls Rex Eric in an intimate moment. 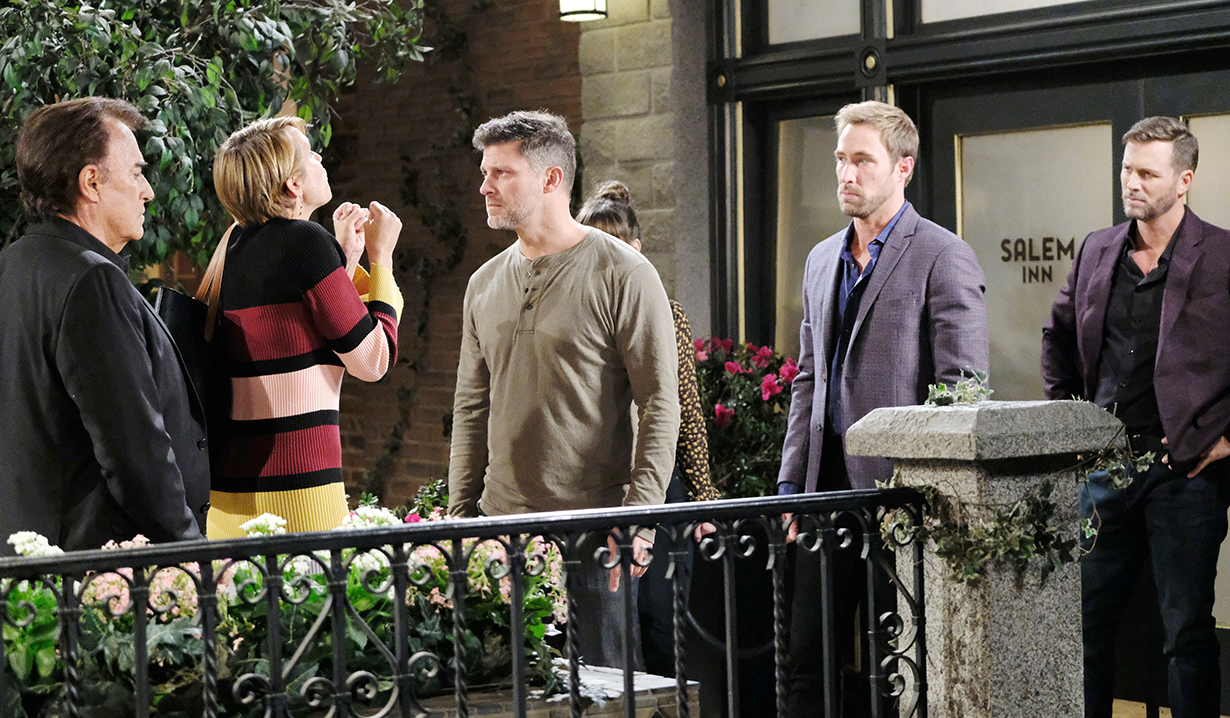 At the hospital, Eric tells Sarah it’s quiet at his apartment now 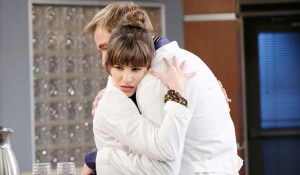 and he’s considering getting a dog. Sarah squeals and offers to take the dog for walks. Rex watches them and once Eric goes, Rex approaches and comments that she and Eric seemed intimate. Sarah lies that they were talking about a patient. Rex is sorry for making assumptions. He’s exhausted.

At the Kiriakis mansion, Will tells Sonny about his editorial about the Stefan DiMera kidnapping case and how the CCTV footage at the pier didn’t show Xander or Ted the day Ted claimed he was abducted from there. 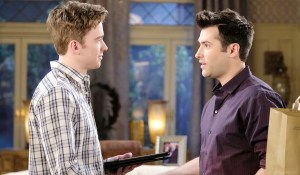 Will says there was something in Hope’s voice that makes him think she’s suspicious of Ted.

At the square, Ted professes to love Hope. They kiss and Hope asks to go to Ted’s house to dine. Ted needs time to prepare. He’ll make seafood salad.

At the DiMera mansion, Gabi paces, worrying about getting the CEO position. Stefan tries calming her nerves. He talks about his intense feelings for her during their wedding and she deflects when he asks if she was feeling the same. They flirt. He wants to consummate their marriage – now. They kiss and head to bed.

In Chicago at Tony’s place, Brady goes to get the car as Kristen in the Nicole mask gloats about reclaiming her legacy. Brady returns and Mr. Shin calls. He’s on his way to Salem so they head home.

Mr. Shin’s arrival interrupts Gabi and Stefan’s intimacy at the DiMera household. “Greetings,” the man says, formally. He tells them the board agreed with this decision – “You’re fired.” Shin knows it’ll take a lot to find a new DiMera to take his place but Gabi reveals she and Stefan are married and she can take over at DiMera.

Tony, “Nicole” and Brady arrive in Salem. Brady goes to check if Shin is checked in at Salem Inn while Eric sees “Nicole” with Andre at the square and gasps. Tony sets Eric straight that he’s Tony. Eric thought he was dead. He asks why Tony’s back and learns Tony got married. Eric’s face falls when Faux Nicole asks him to congratulate them. Eric’s shocked and wonders what the hell he’s thinking. Tony tries to take “Nicole” away but Eric continues to interrogate them. Do they even know each other? “Nic” explains he saved her from the warehouse fire. They fell in love. Eric thinks she’s joking. Brady reappears. Shin hasn’t checked in yet. Eric looks gutted and asks his brother if he knew about this. Brady admits he was their witness. Eric flies off the handle at them both for Nicole making a terrible decision. He yells at his devastation and shoves Brady into the Salem Inn doors. Rex and Sarah appear and Rex grabs Eric. Eric summarizes what went down and Rex is shocked to see Tony. Sarah sides with Eric’s anger, but Fake Nicole tells him this was her decision and orders him to leave her the hell alone. She and Tony go and Brady tries to explain but Eric doesn’t want to hear it. Rex and Sarah feel bad. Eric apologizes for Rex having to separate them. Sarah asks him to come home with them as Rex gives her the side-eye.

Hope and Ted arrive at his house. They start dinner but Ted is missing basil so he runs back to the market while Hope starts rummaging through his things to find out what he’s hiding. She finds a wad of cash just as Ted returns. He asks her to explain.

Brady finds Fake Nicole and Tony outside the pub. They rehash what went down and he goes home. Tony doesn’t get why Kristen doesn’t tell Brady who she is. Kristen says she’ll only reveal her identity once he’s in love with her again.

Rex, Eric, and Sarah arrive at the Kiriakis mansion and agree to dine with Sonny and Will who have take out. Later, in bed, Sarah’s getting too sleepy to have a bath. Rex tells her he loves her and she replies, “I love you too, Eric.” Rex asks her to repeat that. Meanwhile, downstairs, Brady arrives and Eric refuses to speak to him.

Back at the DiMera mansion, Nicole busts in on Gabi’s request to be named CEO to tell Shin Gabi’s not the only DiMera. Tony enters the room and everyone assumes he’s Andre. She corrects them. “It’s Tony DiMera, my new husband.”

Stefan and Gabi Are Married As Fake...