Eve Injects Jack With Fake Serum After Pledging Her Support

Wednesday July 24, 2019: On Days of our Lives today, Rex and Xander clash, Jennifer decides to move on, and Haley deals with PTSD. 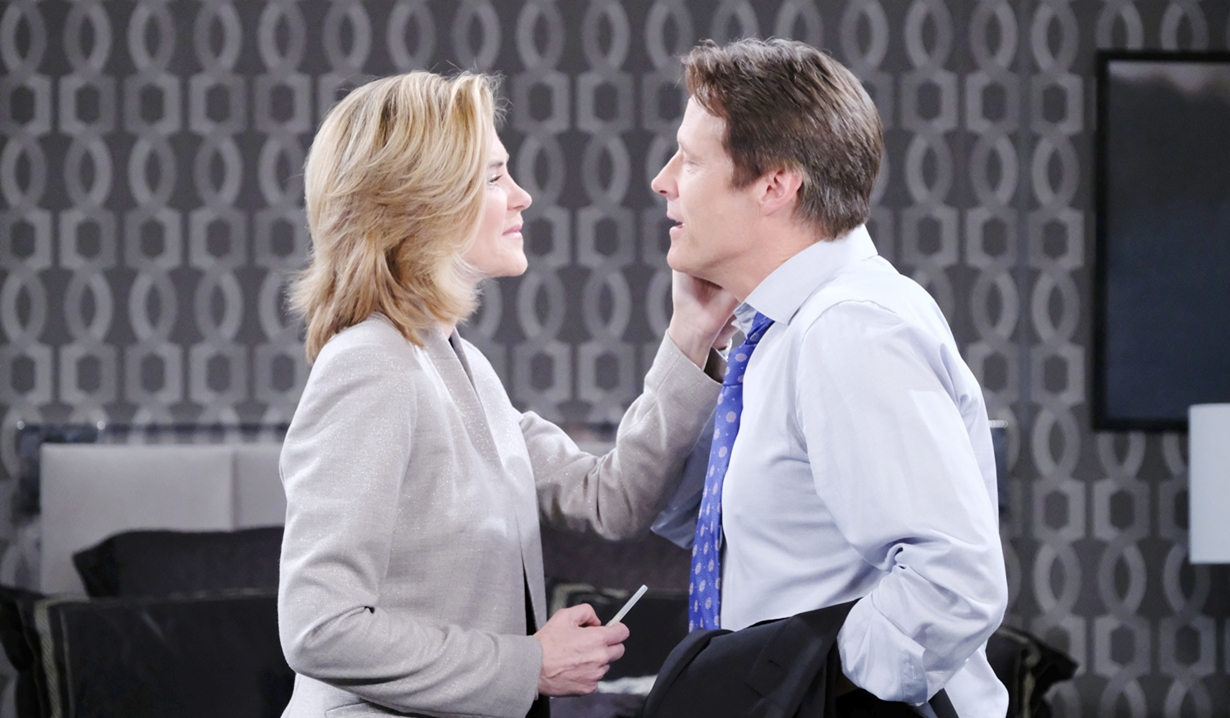 At the apartment, Rex asks Eric if he has any idea why Sarah is in such a rush to move out. He’s not keen to move into the Kiriakis mansion, since Maggie hates him. Eric thinks Sarah wants to be closer to her mom. Rex thinks Sarah feels bad about rubbing their newlywed bliss in Eric’s face. Eric insists he’s happy they’re both happy. Rex vows to be there for Eric; he deserves to find happiness as well.

Xander is thrilled when Sarah arrives at the Kiriakis mansion to move back in, until she says Rex is moving in too. He questions why she’s moving on from the living situation with Eric and points out her mom hates her hubby’s guts. Sarah bristles; it’s none of his concern. She rants about Xander almost killing her mother-in-law until he blurts, “It was all her idea.” He clarifies he meant Stefan, and claims he kept Ted and Kate alive until he could bring Stefan down and protect the Kiriakis legacy. 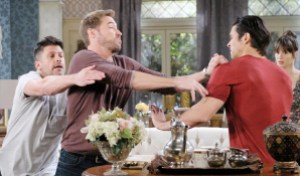 Sarah feels he only succeeded in making himself look bad in everyone’s eyes – including hers. Xander’s distraught that he’s disappointed her and asks what he can do to get back in her good graces. Sarah says he can move out. Xander insists it’s his home as Rex and Eric arrive. Rex snarls at Xander about what he did to his mother – he’ll be watching him. 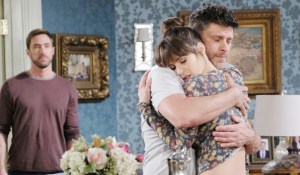 Xander baits Rex for cheating on the most wonderful woman and predicts he’ll slip up again leaving his wife to seek comfort elsewhere. Rex shoves Xander and Eric breaks up the fight. Xander tells Sarah she’ll know where to find him when she needs comfort – here in his home. Xander and Rex step out and Eric makes Sarah feel better. They’ll miss each other, and embrace as Rex reappears.

In the hospital, Jennifer apologizes to Dr. Henry Shaw, (played by Andre Khabbazi) for not speaking since New Year’s. 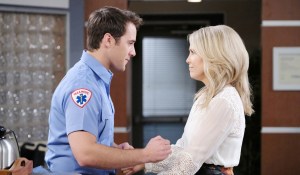 He doesn’t think dinner together is a good idea. After, JJ appears, smiling, and talks about moving into the loft. He admits it’s weird being in Claire’s old room – Haley wasn’t able to sleep until this morning. He blames Jack and his disgusting wife. Jenn updates him on her clash with his father and feels she pushed him too far – now he’ll never take the serum. She has to move on. JJ supports her. Henry reappears and Jenn makes amends by explaining about Jack. Henry’s still interested but wonders if he’s a consolation prize. Jenn assures him he’s not – he was the only one she wanted to see after deciding to move on. Henry agrees to a dinner date.

Eve arrives at the suite and tells Jack she was at the office all night and has made a decision. Jack assures her his feelings won’t change if he takes the serum. Eve clarifies she’s not breaking up with him. Jack was expecting divorce papers since Eve acts like him wanting his memory back is about Jennifer. Eve is determined to quell her insecurities and support him. Eve recalls surviving the loss of her daughter. If she lost her memories, she’d do everything she could to get them back. She wants him to do what he needs to do and is sorry. Jack promises she won’t lose him. He pulls out the serum and Eve worries about it being safe. Jack reassures her. Eve offers to inject it for him. She does it, and Jack gets choked up over Eve’s support. She hopes to give him the greatest gift of remembering his children. Jack decides to go to work while he waits for results and kisses Eve passionately before leaving. Later, Xander arrives to assure Eve he switched the vials. He asks, “Did your husband take the fake serum yet?”

At the loft, Haley dreams she’s sleeping with Tripp when Claire appears and douses them with lighter fluid and flicks her lighter. She wakes up screaming and Tripp rushes in. 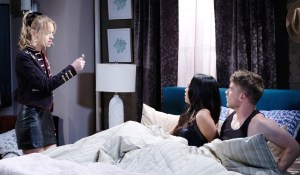 Shaking, Haley explains she had a nightmare about Claire – she was going to kill them. Tripp soothes her and offers to make breakfast. Haley enthuses about Tripp’s omelet but then flashes to Claire stabbing Tripp and becomes hysterical. Tripp thinks she has PTSD. Haley won’t go to the hospital and doesn’t want JJ to know – she’ll handle this on her own. Tripp tries unsuccessfully to convince her to see a doctor, then suggests she sleep in his room and call if she needs him. Later, alone, Haley has another episode, seeing Claire taunting her, and JJ arrives.

More: Lucas Adams exits Days of our Lives as Tripp

At the hospital, Tripp asks Henry Shah for a sedative to help him sleep.

Jack runs into Jennifer in the square and has something really important to tell her.

Gabi and Stefan strategize together.