Tuesday July 23, 2019: On Days of our Lives today, Susan pulls a gun on Kristen, Kate gets a visit from Stefan, and Sarah reaches a decision. 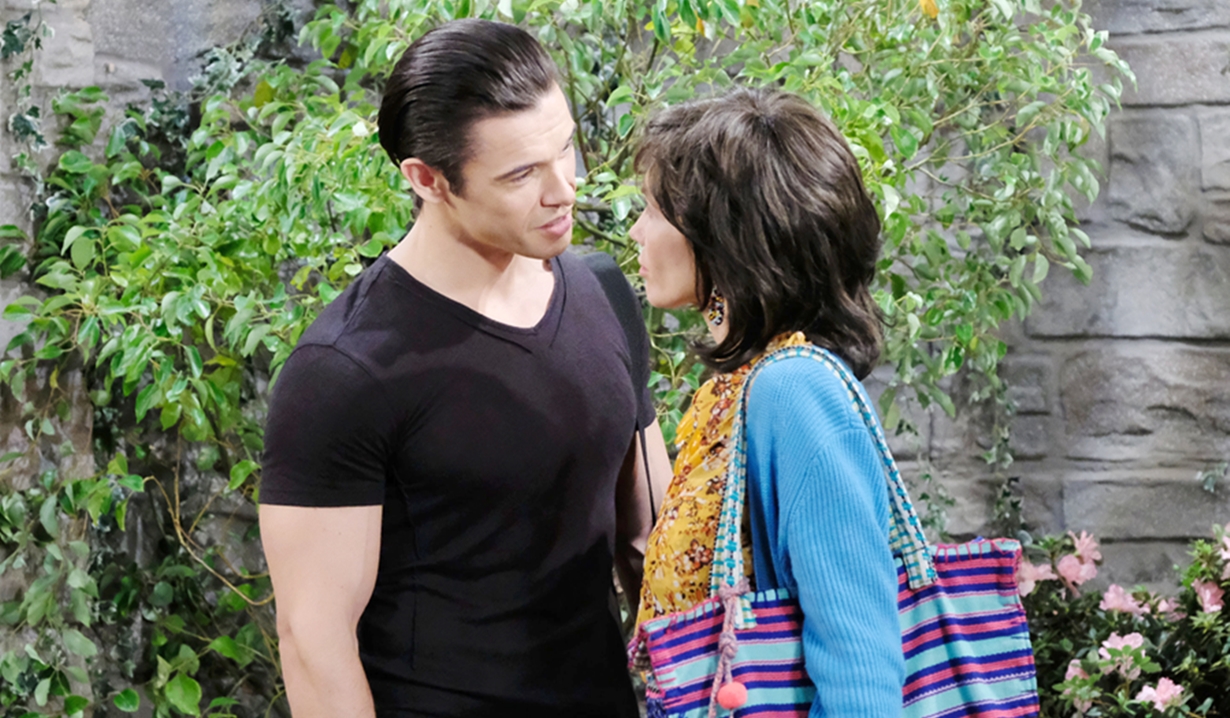 At the apartment, Sarah tells Eric that Kate implied the three of them living together is incestuous. Rex appears and can’t believe he didn’t see it – all the signs are there. Sarah protests there’s nothing going on between her and Eric. Rex is puzzled – he was talking about his mother playing mind games with Sarah. Rex learns Kate whacked her with an ice bucket and leaves to talk to her. Sarah and Eric discuss Rex. 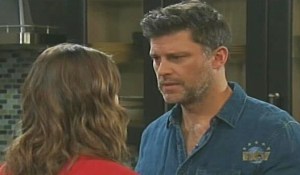 She acknowledges she’s cheated in her heart with Eric and feels Kate may have a point; they’re tempting fate. Eric admits his parents are worried too and says it hurts to see her with Rex. Sarah thought he was going to be with Nicole. Eric stops her – she’s married to his brother.

Kate opens her door to Stefan, who confronts her about lying that he kidnapped her and Ted. He warns she won’t get away with it and asks if Nicole offered her a deal to get him out of the way. He’ll give Kate whatever she wants if she explains why she’s doing this. Kate says she had no choice. Stefan presses her to tell him what’s going on. Rex arrives and Stefan complains his mother’s framing him. Kate flashes to Kristen’s threats and hollers for Stefan to leave. After, Rex calls the cops.

In the square, Ted leaves Kate a voicemail to call back so they can match their statements. Lani appears – they need more than his word that Stefan’s responsible. She alludes to Kate providing a significant detail and Ted reads over his statement. Just then, Lani’s called to Kate’s room. Ted follows.

In the Kiriakis mansion, Brady wants Xander to show him what’s inside the briefcase. They debate until Xander opens it and reveals a folder he didn’t want Gabi to see. Brady sighs about Xander’s secretive nature. Xander counters he dealt with Kate. Brady can’t have him going rogue and needs to see what else is in the briefcase. Maggie interrupts – she’s having a moment of weakness. Brady will take her to a meeting. Xander says he’s behind her, but Maggie questions if she can trust him. Once alone, Xander looks at the mask and says, “Come on, Nicole, let’s have some fun.”

In the park, Susan squeaks as she comes face-to-face with Kristen dressed as her. She pinches Kristen’s face to see if she’s real. Kristen, in Susan’s voice, tells Susan to pull herself together and slaps her. Susan realizes she’s the mean, mean, mean Kristen DiMera, decides she came back to hurt Marlena, and pulls a gun on her. Susan hollers for the police and Kristen protests, “I’m not Kristen DiMera. Come on, don’t you recognize me?” She tells Susan she’s her sister…Sister Mary Moira. Susan asks why she’s not in a nun’s habit. Kristen improvises that she fell in love with the convent’s gardener, Hank. Susan gets caught up in their love story, apologizes for the gun, and hugs her before leaving. Once alone, Kristen growls about needing to find Xander and the mask.

Lani checks on Kate at her room then leaves. Rex confronts Kate about the situation with Sarah. 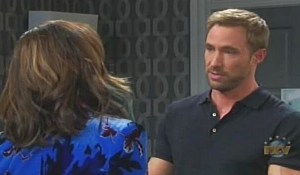 She apologizes, but says her comments struck a nerve – she wonders why. Rex wants them to get along. Kate thinks Maggie should be nicer to him as well. Later, Ted visits and Kate admits she was tempted to tell Stefan the truth, but she didn’t because she’s worried he’s no match for Kristen. Kate updates him that she lied to Lani that Xander and Stefan were talking outside their room in the tunnels – once Stefan’s convicted, Kristen won’t be a problem.

In the square, Maggie and Brady discuss Xander. Brady warns if he tries to harm their family, he’s toast. Susan appears, hugs Maggie, and explains she has to get back to Roger. She apologizes to Brady for not being able to return his feelings, but he’ll find real love.

More: Lucas Adams exits Days of our Lives as Tripp

In the park, Xander meets Kristen and smirks about Susan holding a gun on her. She demands the mask and he taunts her with it, then warns messing with him can be deadly. Kristen’s done working with him. She recaps Ted and Kate are terrified and no one will stop her, as Nicole, from taking over DiMera Enterprises. Xander warns if she gets in his way, he’ll blow her and her big plans out of the water. Kristen leaves with the mask. Later, Lani spots Stefan there and tells him if he threatens anyone else in this case he can kiss his freedom goodbye.

Xander and Rex argue over Sarah.

Pollstar Awards Laud Beyonce, Lady Gaga, Garth Brooks and Others as Touring Artists of the Decade