Monday July 22, 2019: On Days of our Lives today, Kate hits Sarah by accident, the real Susan is confused when Will brings up Susan hitting on Brady, and Gabi continues to attempt to clear Stefan's name. 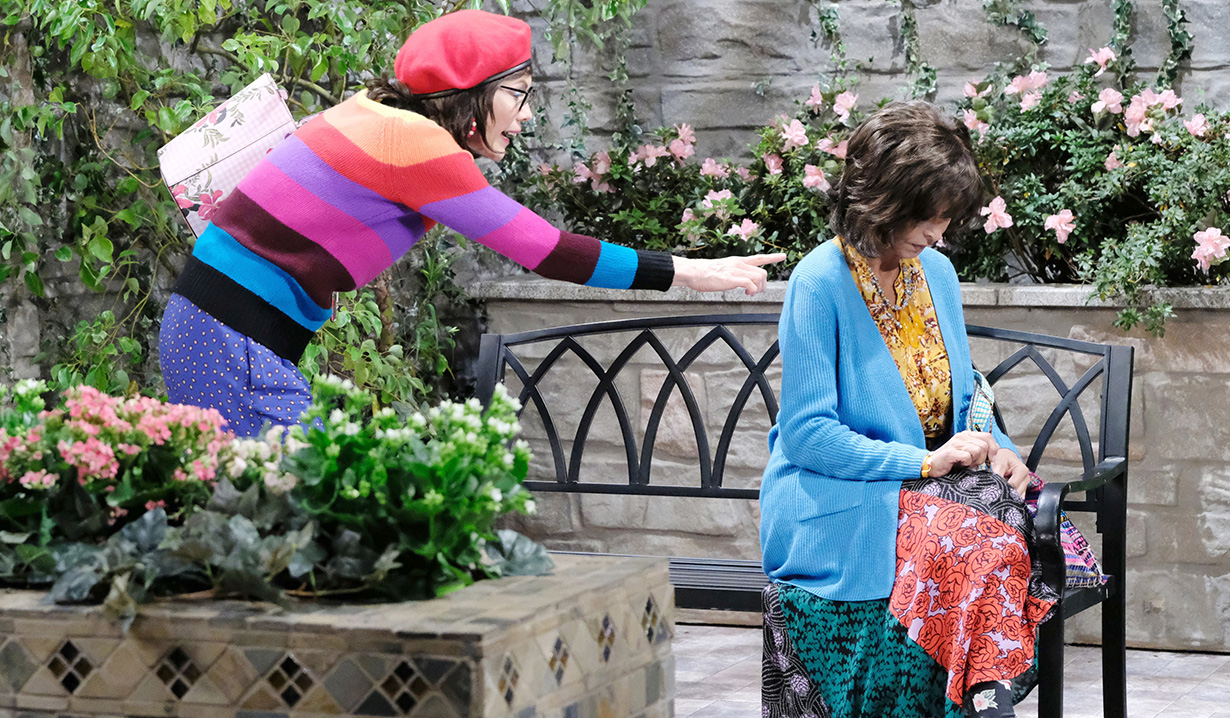 Eric runs into Sarah at home and offers to help her find a place this afternoon but Sarah is going to see Kate after her terrible ordeal.

At SPD, Stefan objects at Lani telling him he’s behind Kate and Ted’s k 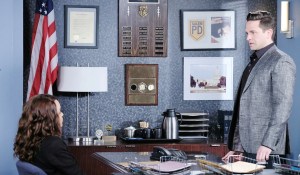 idnapping and calls it a witch hunt. Anyone can get access to those tunnels under Salem. Stefan assumes that something doesn’t add up with Ted and Kate’s statements and asks Lani to fess up.

At the square, Gabi reluctantly admits to Brady she stole Xander’s briefcase because she thought there’d be something inside to prove Stefan didn’t kidnap Kate and Ted but Rafe told her she can’t use stolen evidence. Brady realizes she’s got it bad for Stefan. Gabi denies that and goes.

In the park, Xander razzes Kristen who is disguised as Susan that she’s not getting the Nicole mask back. She threatens to kill him if he doesn’t give her back the mask. Xander retorts that she’ll have to beg first. Kristen takes a knee and begs. He’s not feeling it so she tries again. He throws the Lucha Libre mask at her and laughs then forces her to tell him she was stupid to underestimate him.  He says he’ll go get it.

The real Susan Banks shows up at the Kiriakis mansion. Sonny and Will are puzzled that she returned so soon and in new clothes. She runs into the living room and plays with the goose statue and pretends it’s nipping at her nose while Sonny and Will look on. 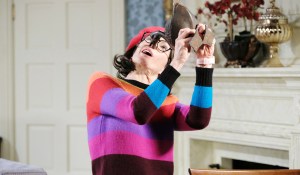 She asks to see Victor but he’s on a call. Will asks if she’s found ‘that gun permit’. Susan says she’d never lose something that important. She shows it to him so Sonny returns her gun from their safe. Susan thinks it’s a gift. The guys confront her about hitting on Brady as he walks in. Susan denies that. She’s with Roger. Brady reminds her she said she had an open relationship. Susan’s shocked and corrects him. She calls an open relationship an “oxen moron.” Sonny tries to correct her, telling her it’s an oxymoron but she doesn’t get it. She runs off to the bathroom while the guys wonder if she’s in denial or has severe memory loss. Will wonders if she’s in denial. Brady texts Xander that he has his briefcase at home and then reveals to Sonny and Will why he has it. Susan returns and whispers to Will that she thinks Brady has a thing for her. She heads out.

Kate paces her room at Salem Inn and flashes to Kristen forcing her to lie. She is afraid to leave the room but eventually goes to get ice, leaving the door open. Sarah arrives and lets herself in and when Kate returns, she hits Sarah over the head with the ice bucket. Sarah falls unconscious. Later, she’s awake and Kate apologizes. Sarah brought her some Ensure. Kate’s a little annoyed by that and that she didn’t get a wedding invitation. Sarah says it was impromptu. Kate asks how married life is. Sarah says it’s the same. Kate urges her to move out of Eric’s. Sarah claims she and Rex have been too busy. Lani arrives to tell Kate that there’s a problem with her statement. They’ve only Xander’s word that Stefan was behind their kidnapping. It’s hearsay and inadmissible. Kate lies that she heard Stefan talking outside the door. Lani protests – Kate never added that to her statement. Kate claims she forgot and kicks both women out. Kate calls and leaves Ted a message to call her.

Gabi arrives at SPD and tells Stefan the latest on her attempt to clear his name. Stefan’s bailed out and heads to see Kate. Lani returns and leaves a message for Ted to call her. Gabi hears and urges her to find out why Ted and Kate are lying to her.

Roman and Marlena discuss Sarah, Rex and Eric’s love triangle at the pub. 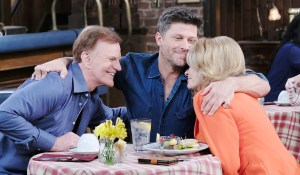 Marlena just wants both the boys happy. Eric walks in and overhears. Eric wishes she’d stop worrying about him. He says he’s taking in meetings and is grateful for their support. They embrace.

Susan greets Marlena in the square. She tells her friend that Brady thinks he’s Elvis and was hitting on her. Marlena’s shocked. Susan drums up clients for Marlena from people she met on the bus to Salem. Will and Sonny find her and talk trash about Susan while Susan stumbles upon Kristen in disguise as Susan in the park and asks for directions.

Eric returns home and Sarah fills him in on Kate clocking her with the ice bucket and Lani questioning Kate’s statement. They wonder if she’s trying to set Stefan up.

Kate’s shocked to see Stefan on her doorstep.

The Real Susan Arrives After...