Kristen Impersonates Susan Banks and Drools All Over Brady

Thursday July 18, 2019: On Days of our Lives today, Eve admits her insecurities to Jack, Sonny and Will are surprised to see Susan on their doorstep, and Gabi tells Brady about Nicole going loco. 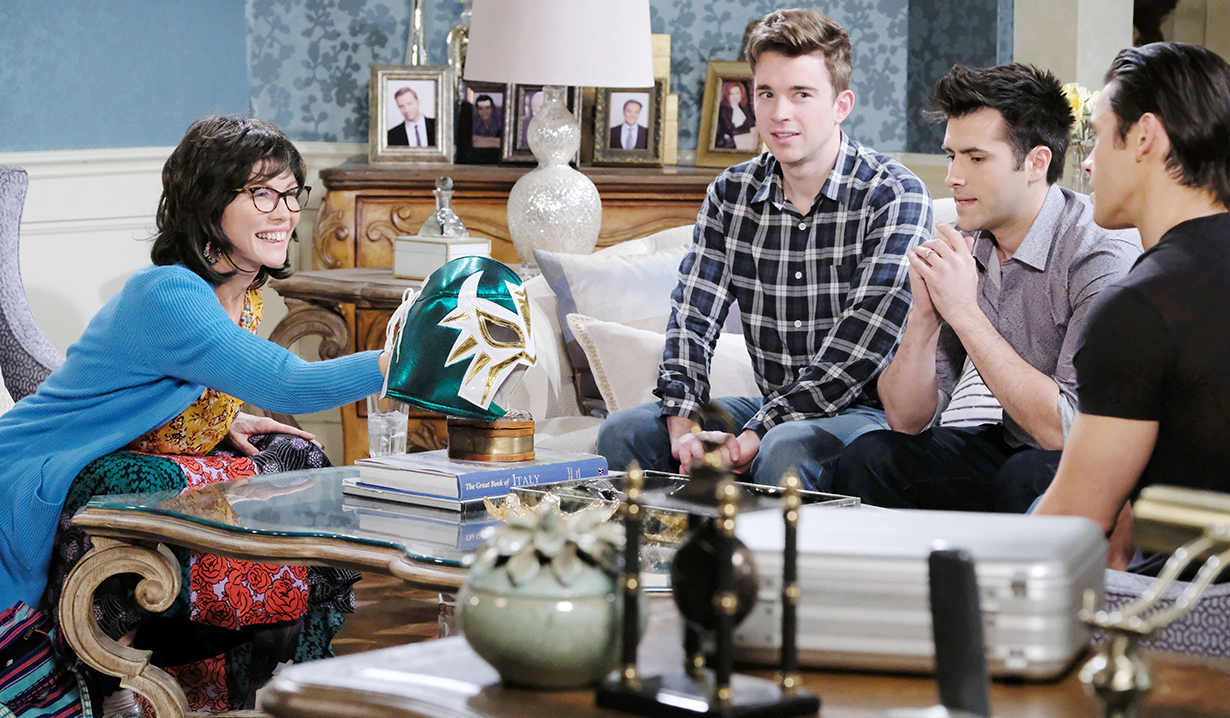 At SPD, Eve yells at Jack when he reveals he wants to take Rolf’s serum to become his old self. She thought he ruled that out? He did but wants a relationship with his children. 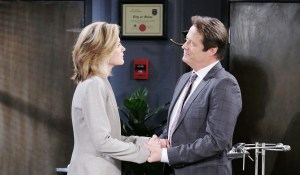 Will has recovered from his tumor and has all of his old memories. Eve thinks this is about him wanting Jennifer back. Jack grins. He loves Eve and is married to her. Does she trust in him? Eve says with all of her heart but she’s frightened. She leaves, crying.

Jennifer runs into Doug’s Place, frustrated after her meeting with Jack. Hope’s downcast and tells her cousin that her divorce is officially over. Jenn hugs her. Hope feels lost. Jenn does too. They thought they’d spend their future with the men of their dreams. Jenn’s ready to move on. The Jack she fell in love with is gone. She goes on and then apologizes for making this all about her and asks if Hope is going to be with Ted. Hope says that’s what he wants. Maybe the divorce means it’s time to explore her feelings for Ted.

Outside the pub, Gabi tells Brady that she thinks Nicole’s behind Stefan being set up for kidnapping Ted and Kate. Brady finds that difficult to believe. He’s surprised Gabi believes in Stefan’s innocence. Gabi tells him about going to confront Nicole and how she was wearing the “kooky mask” – she swears it was a Lucha Libre mask. Brady’s shocked – she hasn’t been herself but he refuses to speak with her. He wants to know why she’s so concerned for Stefan. Gabi says if he goes to prison, she won’t be able to destroy him herself. 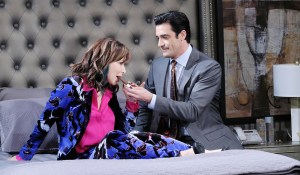 so when they realize nobody’s home so they go into Kate’s room and talk about ways out of their mess with Kristen. Kate faints and Ted sets her on her bed. She wakes up and he gives her water and chocolate. He wants to call an ambulance but she insists she’s fine. She flashes to kissing Ted and then tells him she’s fine and doesn’t like milk chocolate anyway. She asks about his feelings for Hope. Ted thinks she’s ready to move on from Rafe. Kate wonders what law-abiding Hope would feel if she knew that Ted was working with Xander to fake Holly’s death. Ted asks if that’s a threat. It’s not. Kate points out that Hope attracts ‘not so nice’ guys. Ted thinks he’s different but she calls him a liar, blackmailer, and a cheat. Ted claims he’s reformed. He goes and Kate flashes to Ted showering himself in champagne. She tells herself she doesn’t need him.

At the Kiriakis mansion, Xander grins at the Nicole mask and says Kristen’s doppelganger days as Nicole are over. In the foyer, Will and Sonny are shocked when Susan shows up. It’s really Kristen who flashes to finding ugly clothes in her suitcase to fake being Susan. The men hug her, surprised to see her. Sonny goes to get her water while Will takes her into the living room where Xander quickly hides the Nicole mask. Susan spots him and asks, “Who is this big hunk of burning love?” Xander’s introduced as 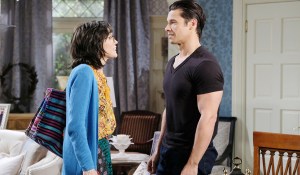 Sonny’s cousin. “Susan” says he shot her very best friend in the world, Marlena Evans. She almost attacks him until the guys pull her away and let her know that he’s the one who helped save Will from the tumor. Susan is grateful and forces Xander to sit with them. She has a gift for him – something “extra special.” She has him close his eyes and fishes out the wrestler’s mask. Xander opens his “peepers” and scowls, realizing it’s Kristen, not Susan.

Meanwhile, Will and Sonny sit baffled by the gift, whispering about how weird it is. Susan nicknames him Xandy and offers the mask. He reluctantly takes it and Sonny jokes it’ll come in handy for Halloween or if he has a career change. “Susan” points out his briefcase and needles him. He finds his words and calls it a “lovely gesture” but thinks she should keep the mask. She wants something more feminine. Xander takes the mask and goes, leaving “Susan” out of sorts. She claims she needs to go to the washroom and follows Xandy. Instead, she bumps right into shirtless Brady in the foyer, who is in from a run. She can barely contain herself from drooling all over him. He says goodbye and heads to shower. She goes to Xander’s room to find the mask but winds up in Brady’s room. He comes from the shower wet, while downstairs, Sonny and Will wonder where she’s gone. Will has a bad feeling. He looks in her purse as Sonny watches in shock. They find a gun.

Gabi finds Xander in the square and accuses him of working with Nicole, not Stefan. Xander gives everything away in his expression and Gabi grabs his briefcase, assuming the proof is in there.

At Doug’s Place, Ted sits with Hope and they kiss.

Outside the pub, Jenn calls Dr. Henry Shah to ask him out.

Gabi vs. Xander in a showdown.

Remember this from July 18, 2007? On Days of our Lives, Sami read a letter about Colleen and Santo, while EJ agreed to help Bo find Tony.

The Real Susan Arrives After...