Jack Decides to Take Rolf’s Serum After Clashing With Jennifer

Wednesday July 17, 2019: On Days of our Lives today, Brady's plan to fire Xander goes awry, Eve makes Ted an offer, and Kristen comes up with a new disguise. 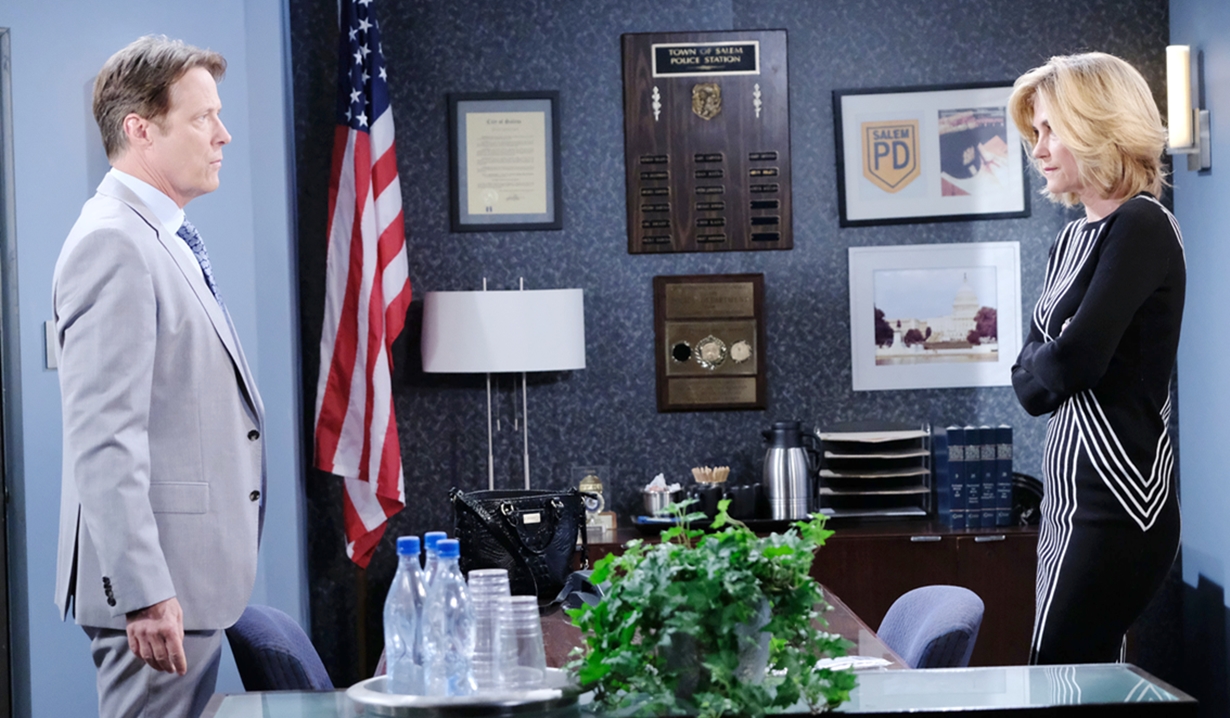 At the Kiriakis mansion, Sonny treats Will to breakfast in bed and tells him Jennifer’s op-ed skewers his Uncle Jack. They hope Jack uses Rolf’s serum. Talk turns to Xander. Sonny feels Brady can now boot Xander from Titan but reiterates he doesn’t want to return. They brainstorm what Sonny’s next business should be, then canoodle.

In the square, Jennifer hands Jack her editorial on his administration. Jack reads that he emboldens racists and fumes. Jennifer explains JJ’s racist landlord kicked him out because of Haley. Jack argues he never encouraged racism. Jenn counters he never spoke against it either. Jack decides he’ll bar Jennifer from his press conferences. Jenn rants that the old Jack was a huge proponent of freedom of the press and would be disgusted. She calls him a coward for hesitating to use the serum. Jack hollers he won’t take it – he doesn’t want her in his life. She returns with an old editorial on democracy for Jack to read. He wonders what bleeding heart wrote it. She says, “You.” Jenn feels the world was better with the old Jack in it; he had kids and a wife that loved him and wouldn’t have traded that for power.

Eve appears in Ted’s hospital room to assure him justice will be served in his kidnapping. Ted flashes to his talk with Kate about incriminating Stefan. Eve wants Ted’s help putting Stefan behind bars – as D.A. Ted can’t prosecute a crime when he’s the victim. Eve’s unbothered, and admits she wants Ted to nail Ben Weston to the wall. 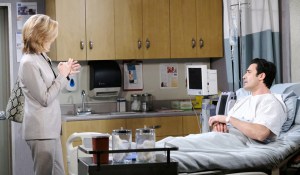 Ted won’t return unless she rehires Hope. Eve suggests he think about it. In another room, Kate disconnects from Austin as Gabi enters and demands to know why she’s lying about Stefan. Kate asks if she’s in love with him. Gabi denies it and complains she can’t take everything from Stefan if he’s in prison. Kate’s unconvinced. Gabi admits the sex isn’t terrible. She questions why Stefan would have kidnapped Kate and asks how Nicole fits into all of this. 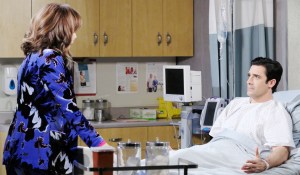 Kate claims they didn’t see her. Gabi calls Kate a liar and vows to prove Stefan didn’t do this. Later, Kate visits Ted to update him on Gabi’s visit. She thinks if they team up with Nicole they can take down Kristen together. Ted fills her in on Eve’s visit and Kate leaves to talk to Nicole.

In her suite, Kristen calls Xander and demands he return the Nicole mask – she can’t leave the room. Xander has her look outside her door. She disconnects and retrieves a box…containing a green and gold wrestling mask. She curses Xander and calls back. He warns she can’t stab him in the back and get away with it – she’s on time out. Kristen grits out that she’ll kill him. Xander mocks her, then teases that Brady just walked in. After, Kristen considers wearing a pair of sunglasses and imagines reuniting with Brady, who threatens to put her conniving ass behind bars. She thinks the better of it and mutters that Brady needs to fall for Nicole before she reveals herself. Gabi knocks and hollers for Nicole to open the door. Kristen opens the door in the wrestling mask and growls, “Go away!” Gabi calls her a freak and leaves. Kristen gets an idea and opens a suitcase. “It might just work.”

At the Kiriakis mansion, Brady fires Xander – committing a felony is grounds for dismissal. Xander produces his contract which says he must be convicted of a felony. Brady counters he worked for the competition, DiMera, which nullifies his contract. 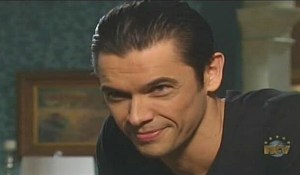 Xander did it to bring Stefan, their competition, down, and warns if Brady plays this wrong, he could be the one out. Brady relents, but will be watching him. Later, Sonny and Will join Xander, who points out he handed in the diary that saved Will’s life. They acknowledge he came through. Xander notes they owe him now; he may need to cash in one day. Once alone, Xander looks at the Nicole mask and grins.

In the park, Jennifer tosses the old editorial in the trash.

Jack arrives in Eve’s office; he’s decided he wants to remember his past and will take the serum.

Outside Brady’s Pub, Gabi tells Brady they’ll see about Stefan going down…something strange is going on and his friend Nicole’s in the middle of it.

Kate knocks on Kristen’s suite door and calls out for Nicole. Clothes are strewn on the floor inside.

Will answers the door at the Kiriakis mansion – to Susan Banks.

Xander Chokes Kristen and Steals the...